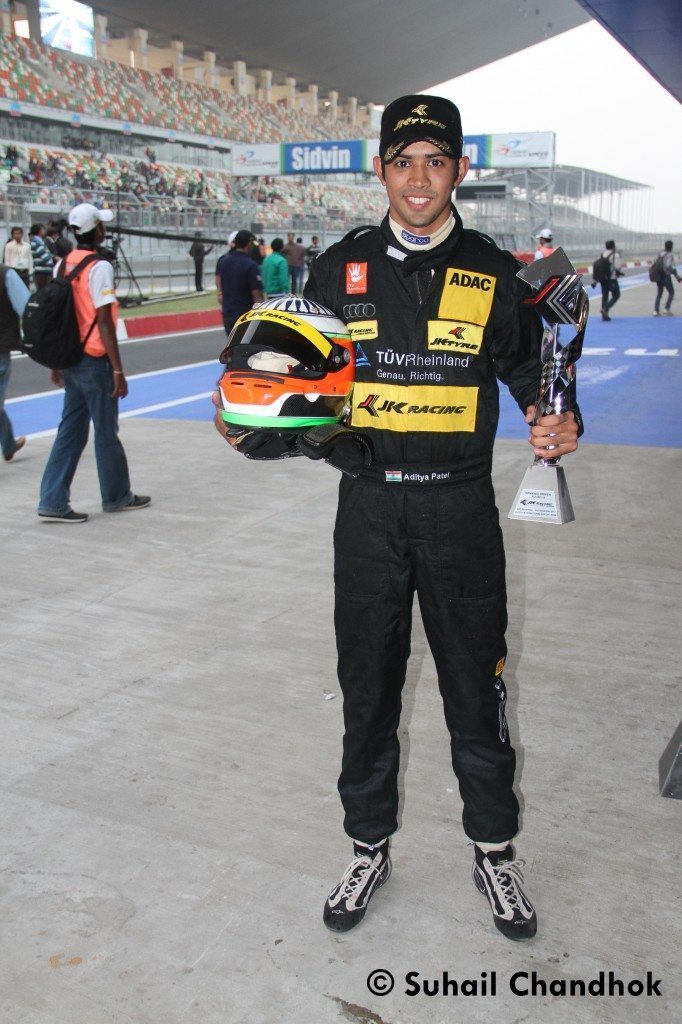 India’s youngest racing sensation and JK Tyre prodigy Aditya Patel gave a spectacular ‘Indian’ finish to Round 16 of the JK Racing Asia Series by finishing first in the final race of the season. In Round 15, Akhil Khushlani finished second. Both Indian champions, therefore, recorded twin podium finishes over two days of the JKRAS at the Buddh International Circuit in Greater Noida.

Patel, who crossed the chequered flag amidst loud cheers from the stands overtook a troubled Aston Hare two laps from the end and maintained the lead to the flags. Thrilled on winning the last race of the year, the young Indian is already looking forward to next year. “There was a lot of dicing going on in the front between Aston, Nabil and Afiq. I was right behind them just waiting for something to happen and then there was contact between Afiq and Nabil, which got me right behind Aston. Down the back straight, I managed to slipstream and get by and from there I just looked in front and kept going”, said Patel.

Akhil Khushlani, who wrapped up a brilliant weekend by winning two podium finishes himself, was a happy young man at the end of a tiring four round weekend. Khushlani was happy to have managed to keep a clean race and not disrupt the fight for Championship between his Eurointernational teammates while claiming a second placed finish. “I’m happy with the outcome. I just don’t want to make a mess of the race and be the cause of a Championship change especially they being teammates. So I just maintained second and made sure that I finished in the same place”.

As a non-series registered driver, Khushlani does not collect points, allowing Jeffri to collect points for second despite finishing the race in third.

In round 15, Patel crossed the line fourth, making it an Eurointernational clean sweep of the top four whilst Aidan Wright came close to his podium hopes in fifth.

Afiq Ikhwan completed the race in sixth after an incident on lap three while he was running in third. Jeffri made his move on Patel and was sandwiched between Patel and Ikhwan when at the straight both Jeffri and Patel made a move on Ikhwan sandwiching the Meritus.GP driver.

Speaking of the moment, Ikhwan was unhappy saying, “Basically, I had no pace and after the second corner, Nabil got the tow from me and was alongside me when Aditya went alongside me too, so it was a little bit like a sandwich. Then as we approached turn four he turned and I lost my front wing” ended Ikhwan disappointedly.

Indian driver Akhil Rabindra of Meco, Amer Beg and Ashraff Dewal of US Formula Project and Visnu Prasad of Meco Racing completed the top ten in Round 15.

In Round 16, while Hare finished second, Aidan Right of Meritus finished third. “It’s a great way to end the year of racing, I’ve been trying so hard just to get the podium to finally get through to get third is great. Throughout the race I got the feeling that I wasn’t going to get it because I had great drivers in front of me but with the accident at the end, I came through to third,” he said after the race.

With Rounds 13 to 16 over, rookie South African driver Aston Hare has wrapped up a fantastic racing season beating established drivers of the JK Racing Asia Series. Hare snatched the championship from Eurointernational teammate Nabil Jeffri after Jeffri had a shut with fierce rival Afiq Ikhwan just two laps from the end of the race.