Home Interesting / Off-beat VIDEO: Watch These Tourists Have A Close Call As Two Lions Attack Their Innova in Bannerghatta, Karnataka

Bannerghatta Biological Park (BBP) in Karnataka is home to around 20 lions. Last week, a couple of them decided to attack a bunch of tourists. Luckily for the tourists, they had rented out the most expensive jungle safari vehicle that day – a Toyota Innova. If they had been inside a regular, open safari vehicle, some of them would have ended up being lion’s dinner.

Also See – VIDEO: Watch This Toyota Innova Crysta Get Stuck While Driving Down A Flight Of Stairs

A video of the attack, shot by a safari bus driver who was behind the Innova, shows the two lions loitering around the vehicle that has stopped in its tracks. Suddenly, one of the lions tries to climb onto the Innova and bite through the rear glass. The Innova starts to move, and as it does, the other lion starts to pursue it. 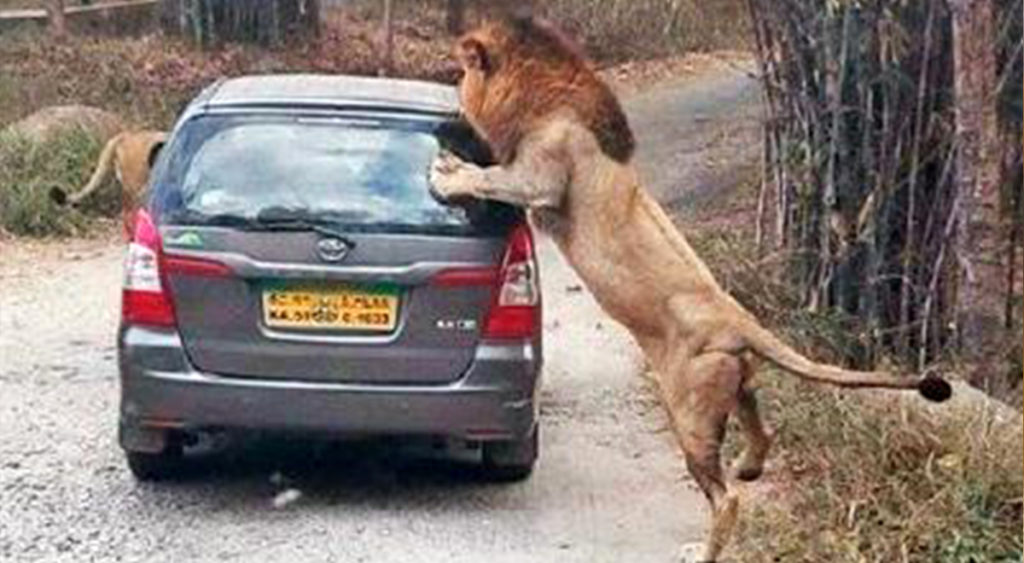 The cries of the tourists inside are clearly audible. Finally, when the Innova picks up some speed, the lions give up and start going their own ways. BBP officials blame the driver for this incident, as the drivers are strictly instructed not to stop during the safari. In this case, he probably did so to please the tourists.

Even though the Innova had meshes on the side, the windscreen and rear window didn’t bear any protection. As for the lions’ unusually aggressive behaviour, its is being said that the stress that captive animals experience when the number of safari vehicles increase might have caused this outburst.