Home Modified Bikes Modified Royal Enfield: If The Streetlights Go Out, Blame It On The Blackout

Imagine the streetlights going out behind you as you ride a motorcycle in the dead of the night on a deserted street. Most everyday Indian made motorcycles, even your Royal Enfield, won’t have that effect on the night. But the folks at Bulleteer Customs have this magic wand which they wave over every day thumpers, to transform them into unique, one-of-a-kind machines. Called the Blackout, this particular build has just the right buttons in its switchgear to turn the mains off. 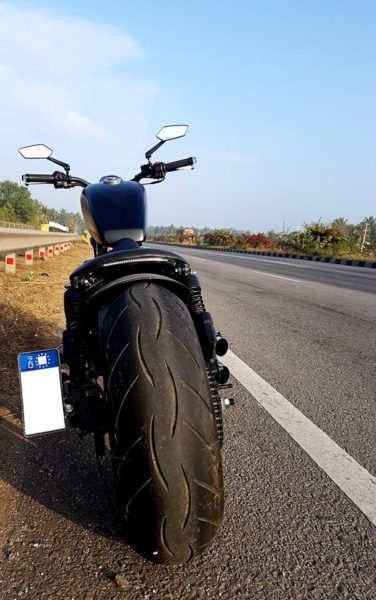 The front gets a modern kit in the form of USD forks, modern rubber & wheels, a flush fitting fender and LED illumination. A single-pod instrument cluster keeps things simple, while the standard ORVMs on a Royal Enfield which turn on their own at high speeds have been replaced with slick, new units. The engine, frame, bodywork and everything else has been blacked out and a customised saddle sits directly above the gas-charged rear springs. For being based on a single, the shorter exhaust pipe is a faux unit, but it’s only for those to figure who know their motorcycles well. 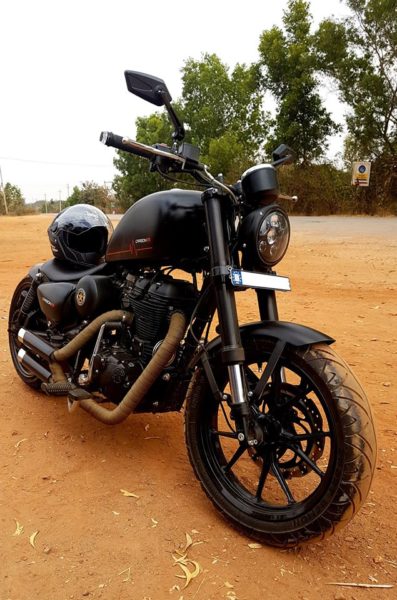 The massive rear tyre has been wrapped around a unique wheel design which has been bolted on to a custom swingarm that has been lengthened to accommodate the fat rubber. Oh and if you didn’t notice, the rear stop lamp and indicators are embedded in a thin strip of LED which fits neatly under the saddle.

We can’t wait for these guys to get their hands on RE’s new twin motor, which should help their good looking builds with that much-needed Go. Until then, if you like what you see, you may search for Bulleteer Customs on facebook or shoot them an email at bulleteercustom@gmail.com