The Mk1 Volkswagen Golf GTI, fondly called the Rabbit, is widely regarded as the precursor to the ‘hot hatch’ phenomenon. With close to 114 HP from its 1.8-litre petrol engine that, incidentally was the first in the world to feature electronic fuel injection, the Mk1 GTI could accelerate from 0-100 kph in 9 seconds. In 1975, that was brisk performance from what essentially was an affordable and practical hatchback. 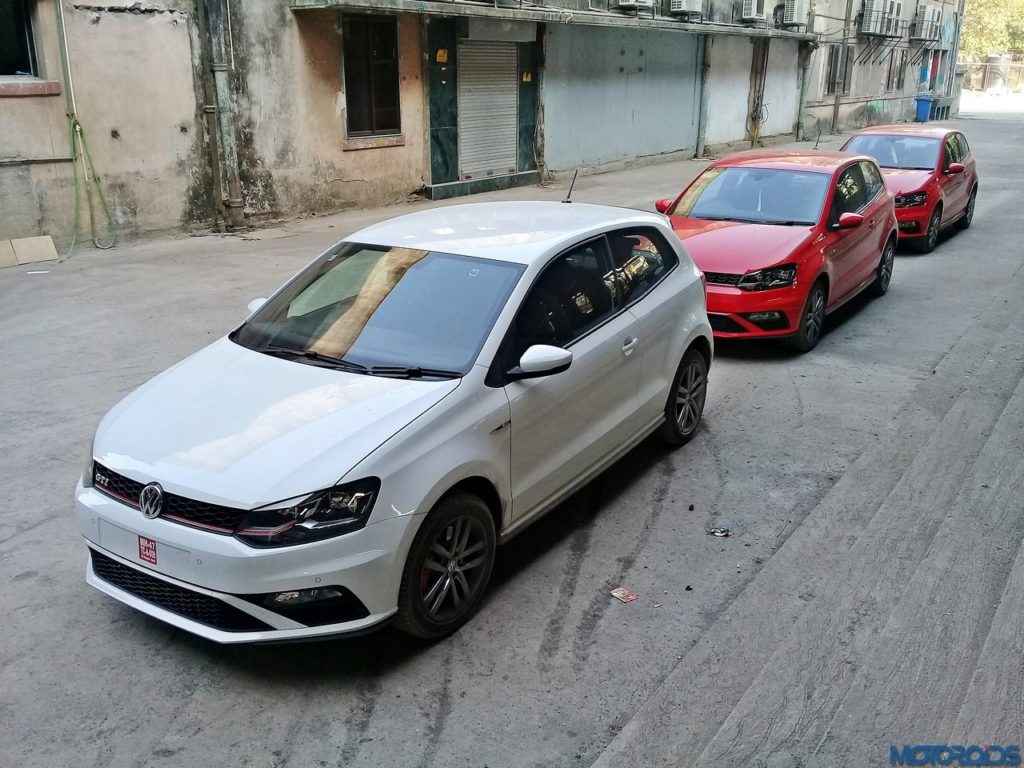 Since then, the GTI badge has been on many a Golf and Polo, delivering on the same philosophy of going really, really fast inside an affordable and practical package. India recently got its first GTI in the form of the new Polo GTI (just GTI for India and only available in 3-door guise). But it comes at a price; a rather steep one at that. The Volkswagen GTI retails in India for a stratospheric INR 25.99 lakhs (ex-showroom Delhi). We tried finding out what makes it so special.

From a visual standpoint, here’s what separates the GTI from the plebeian Polo: 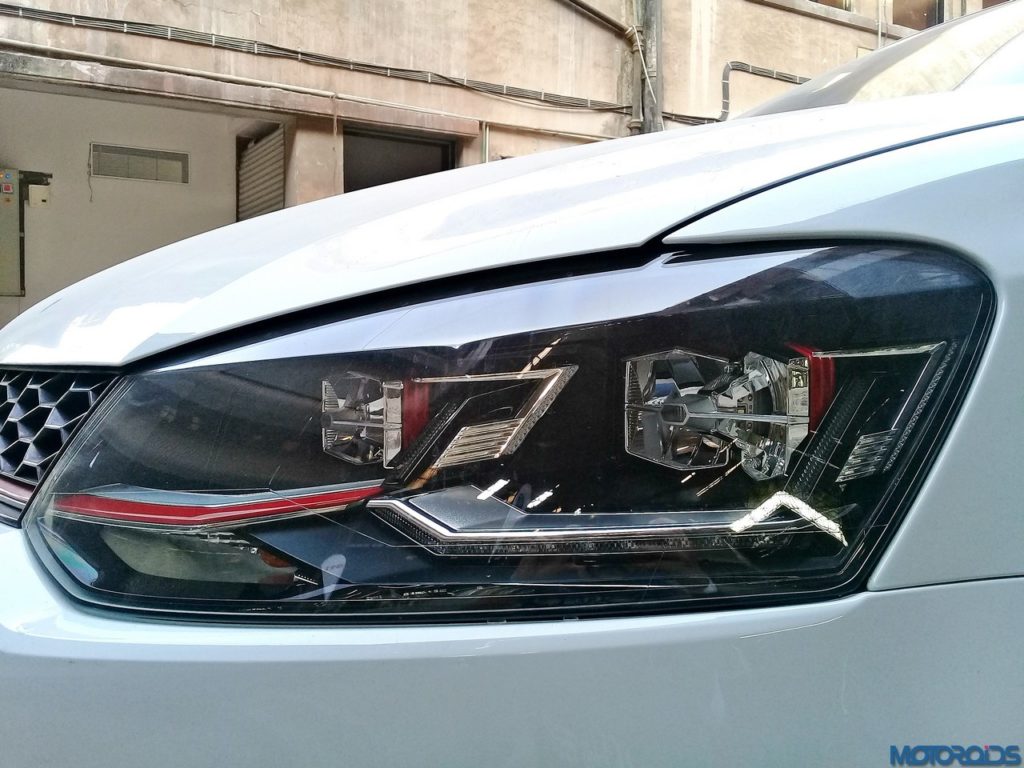 These full-LED headlamps are a GTI exclusivity. No wait. The new Vento Highline Plus just stole them. But anyways, the ones on the top-spec Vento don’t have the red highlights inside them that indicate the GTI’s naughty intents. [PS: They look hot when on.] 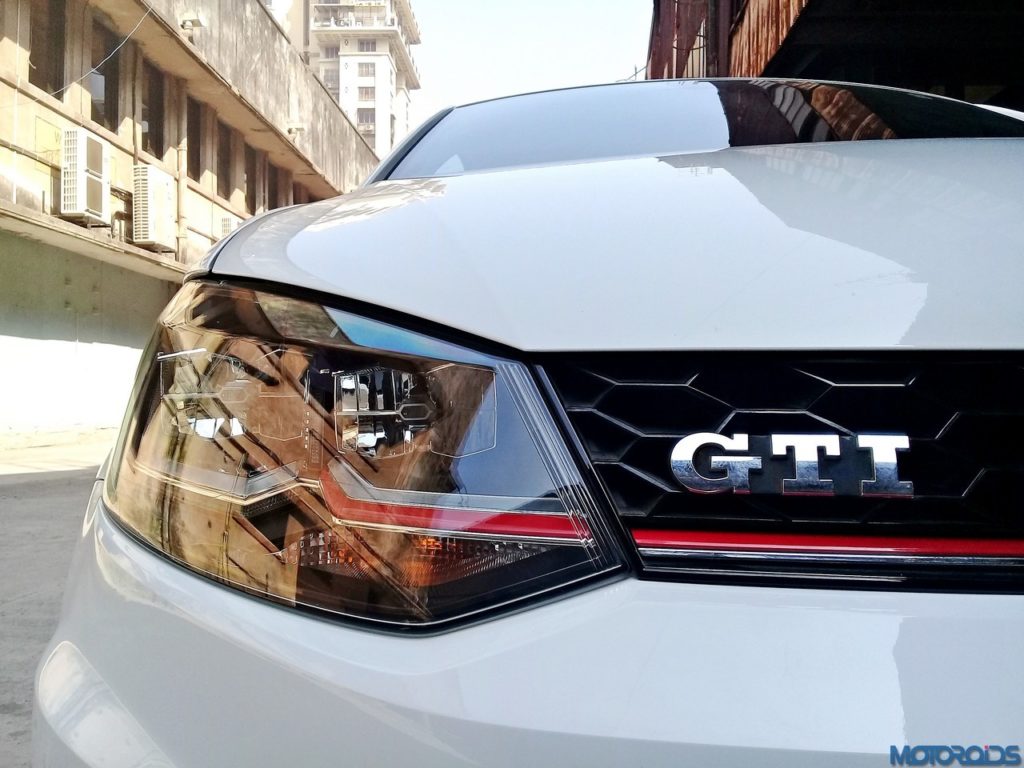 The GTI says its a GTI courtesy of this one badge on the ‘signature GTI Honeycomb grille’.. 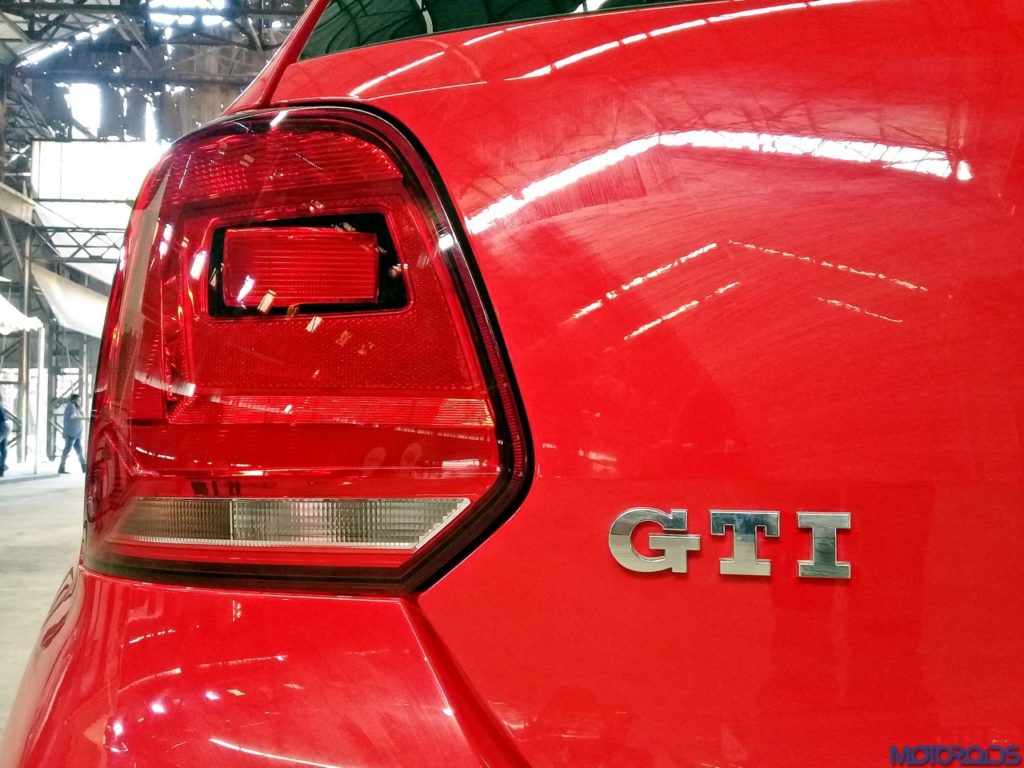 ..and this another badge on the tail gate. 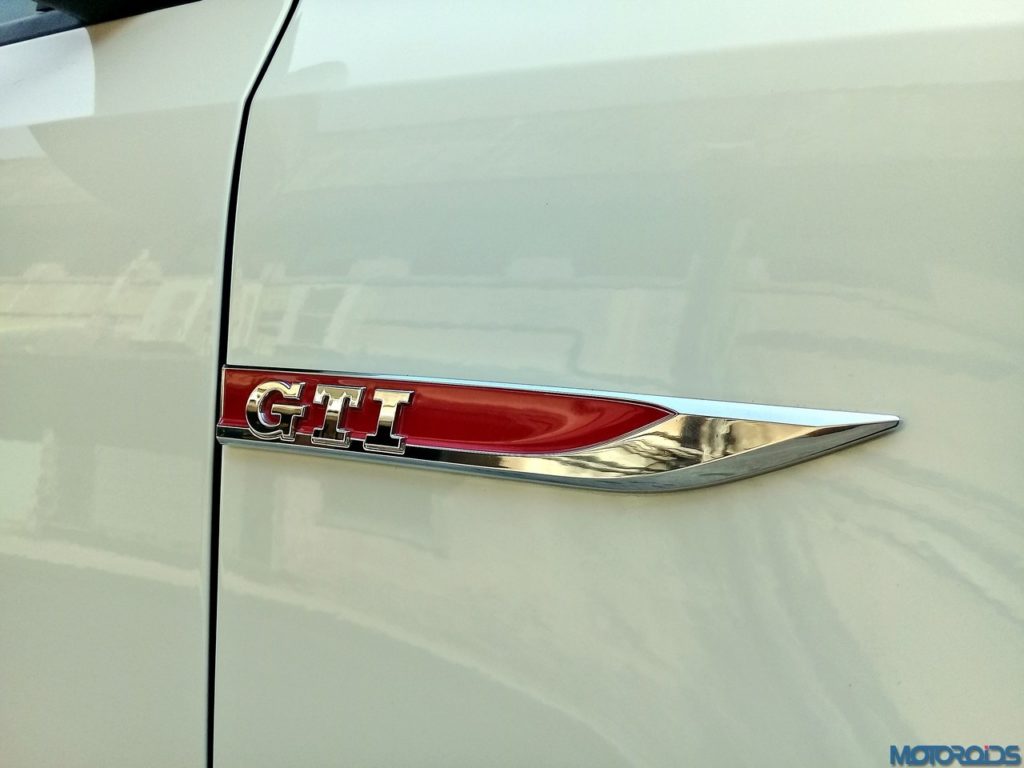 And this fender mounted plaque that says..GTI. If you go looking around for Polo badges, you’ll be disappointed. 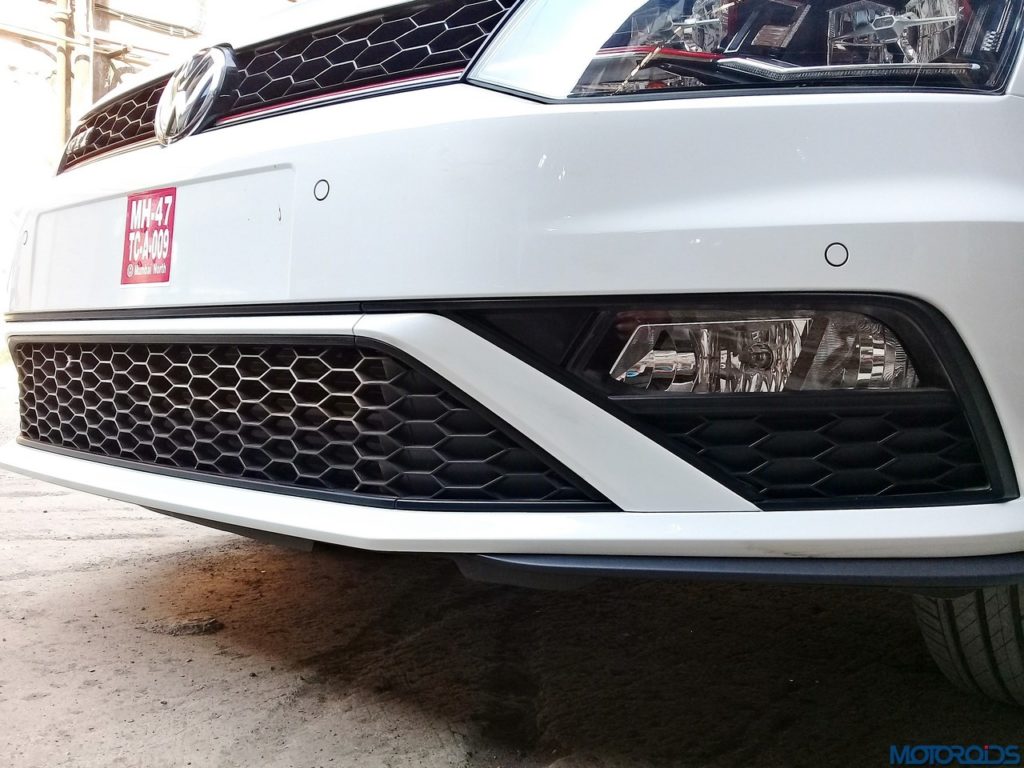 There’s more honeycomb grille on the bumper-work to feed more air into that too-big-for-a-hatchback engine. 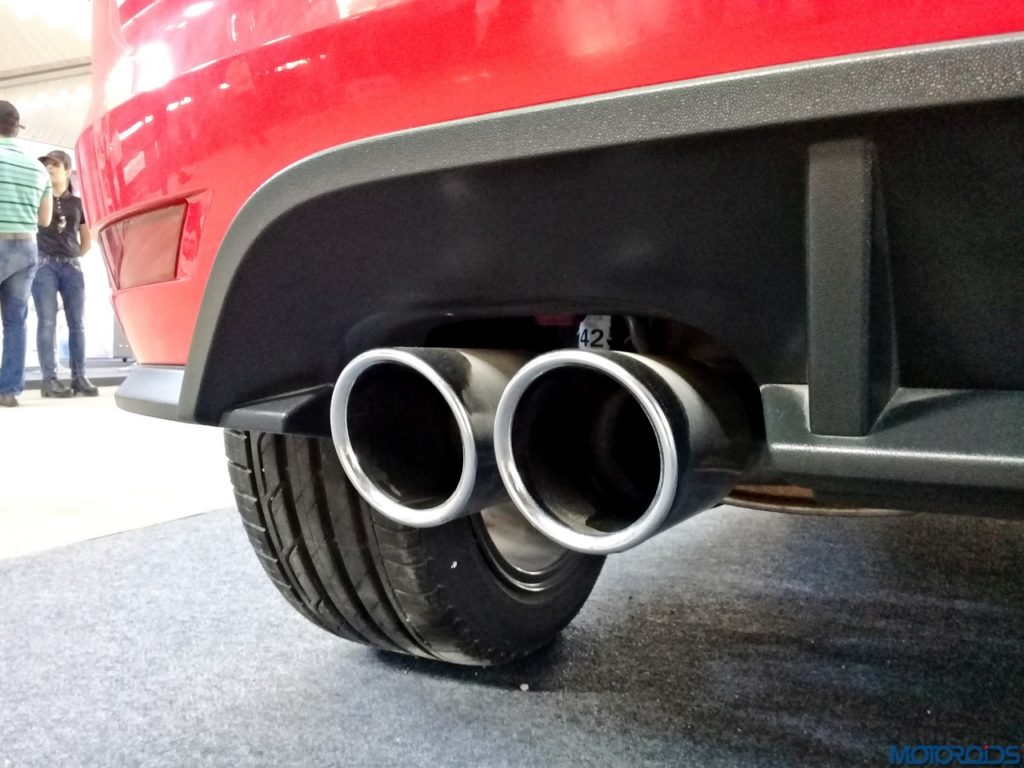 These twin pipes peeking out from the GTI’s derriere indicate that it doesn’t like slow. 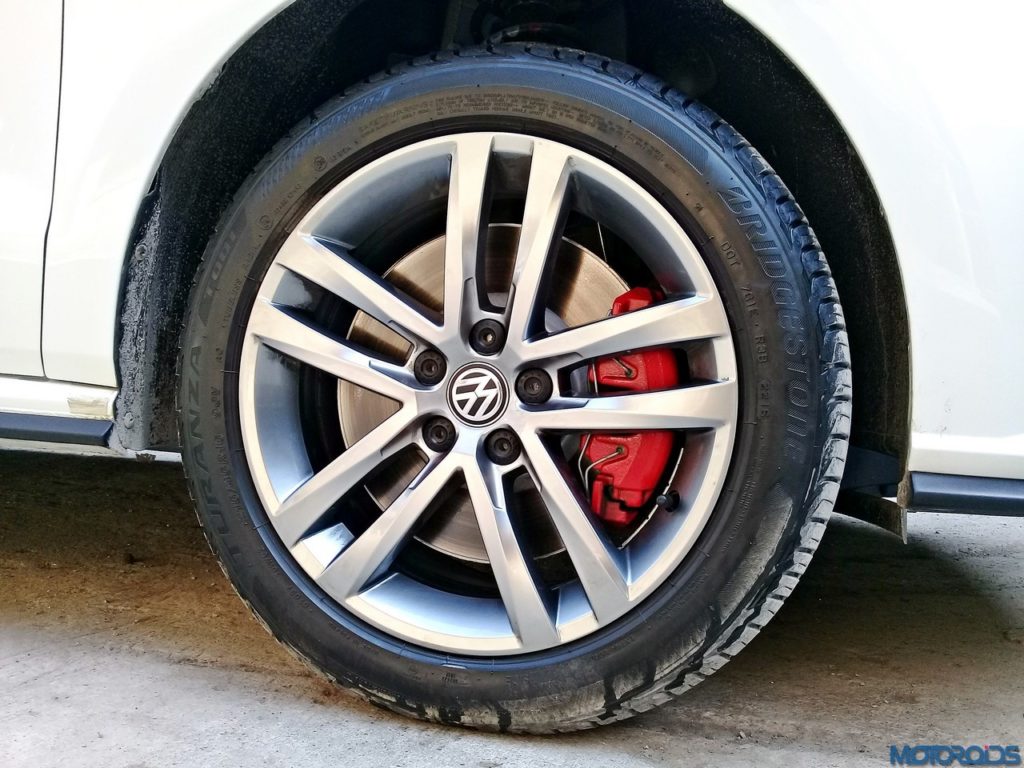 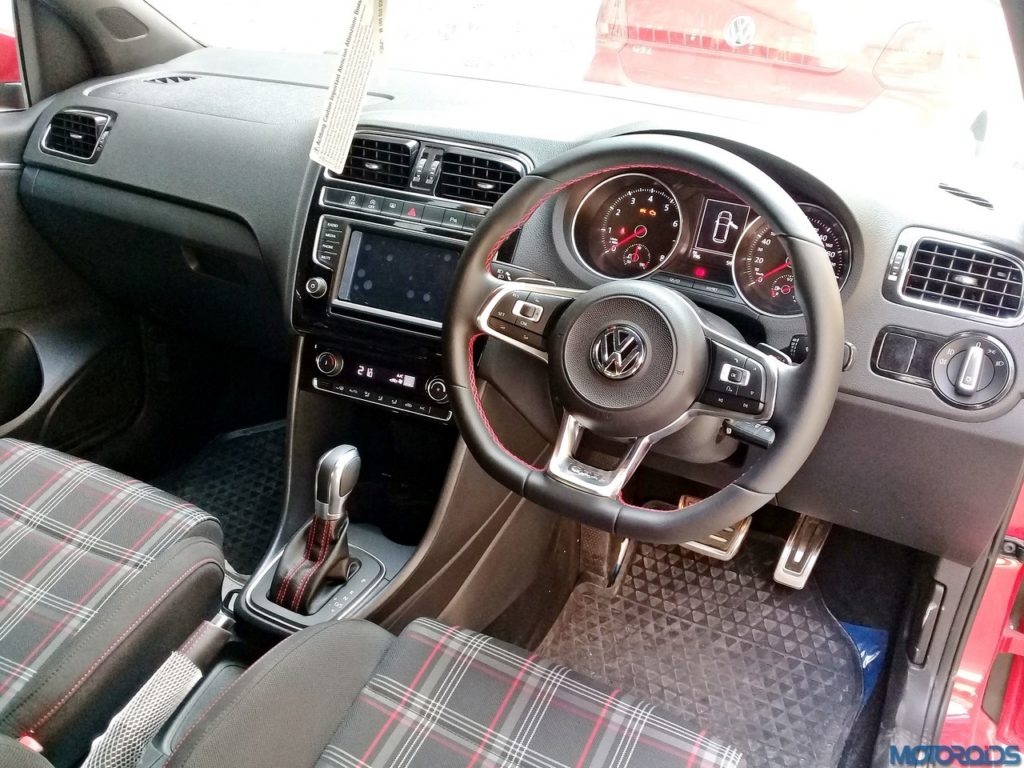 The interiors are Polo like as ever, but the materials used and the way they’re put together feel a notch above the India-made Polo. 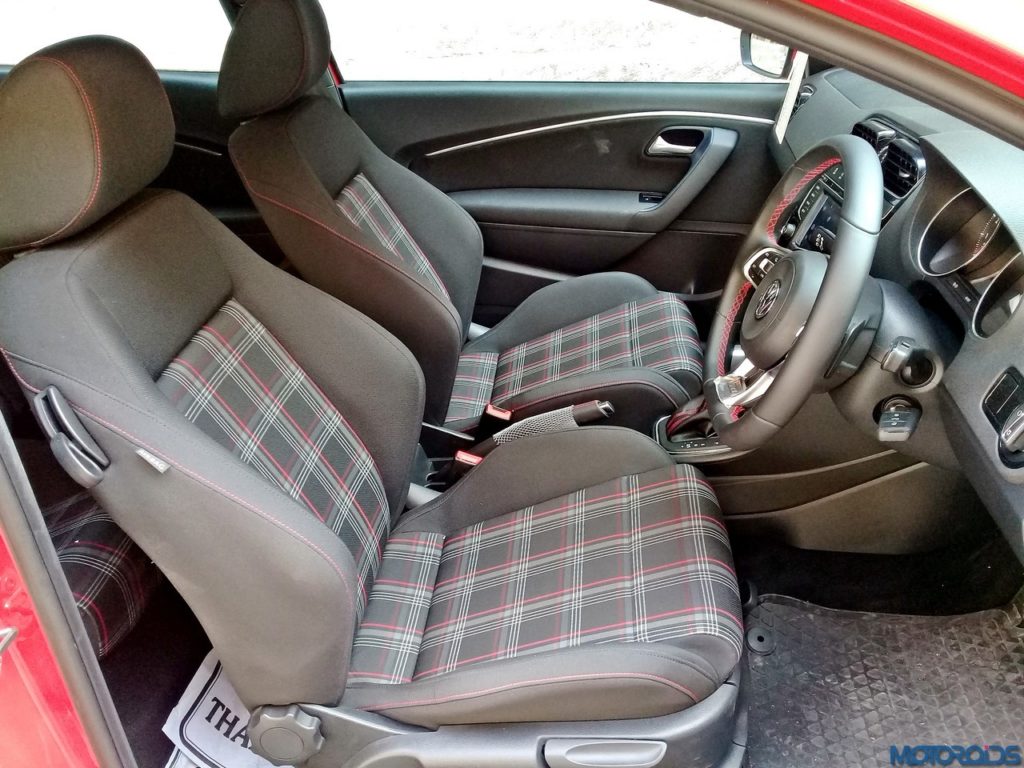 These GTI-specific ‘sports seats’ are awesome. You sit lower than you do in a standard Polo, and the enlarged bolsters hug you like the girlfriend that you never had. They do come with height adjustment and even get drawers underneath, but there’s no electrical adjust-ability. 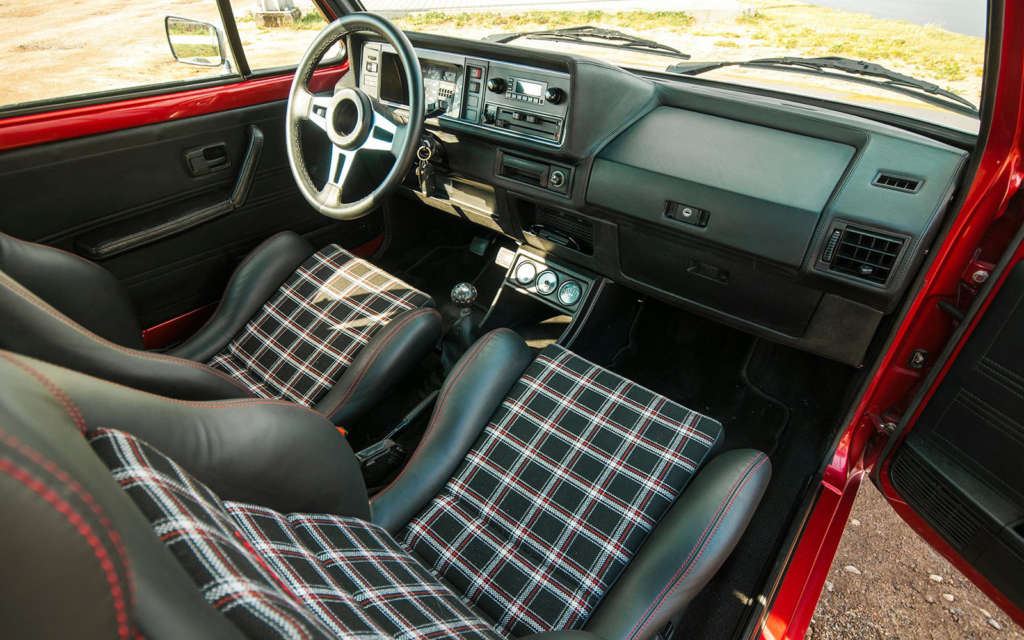 The GTI’s fabric “Clark” seat covers are a throwback to the original Mk1 Golf GTI’s seat covers (above). 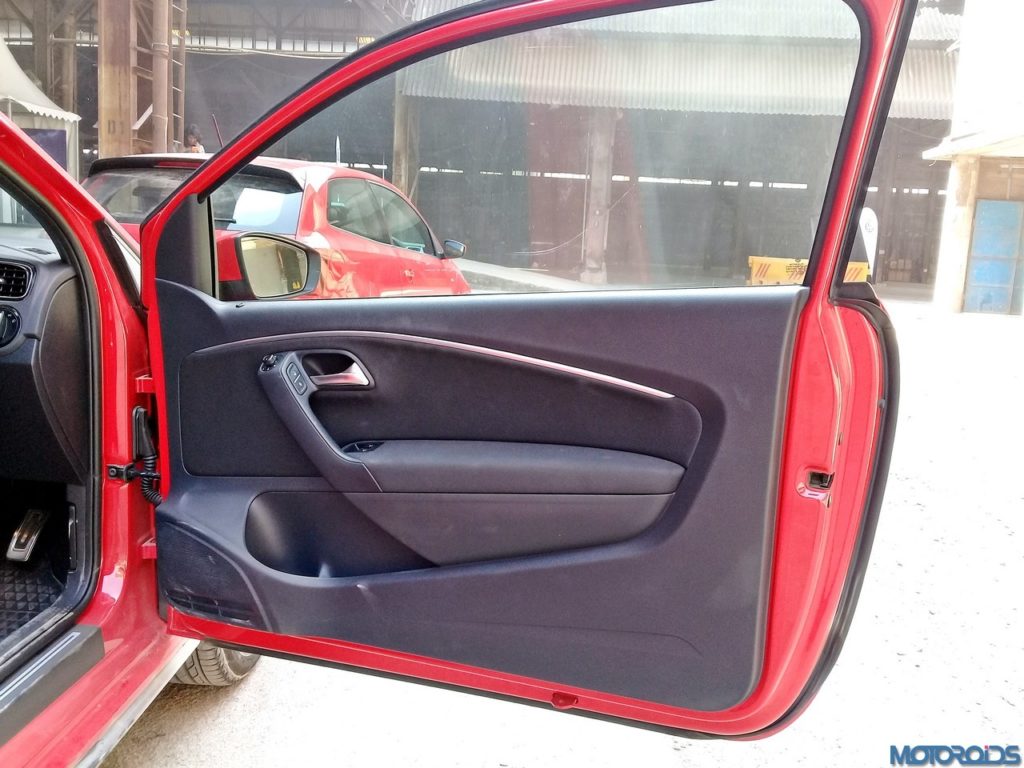 The GTI’s doors are impossibly long. They are like that because of two reasons – to pull off the two-door look without looking like a hack job, and to allow for easier ingress to the rear seat. 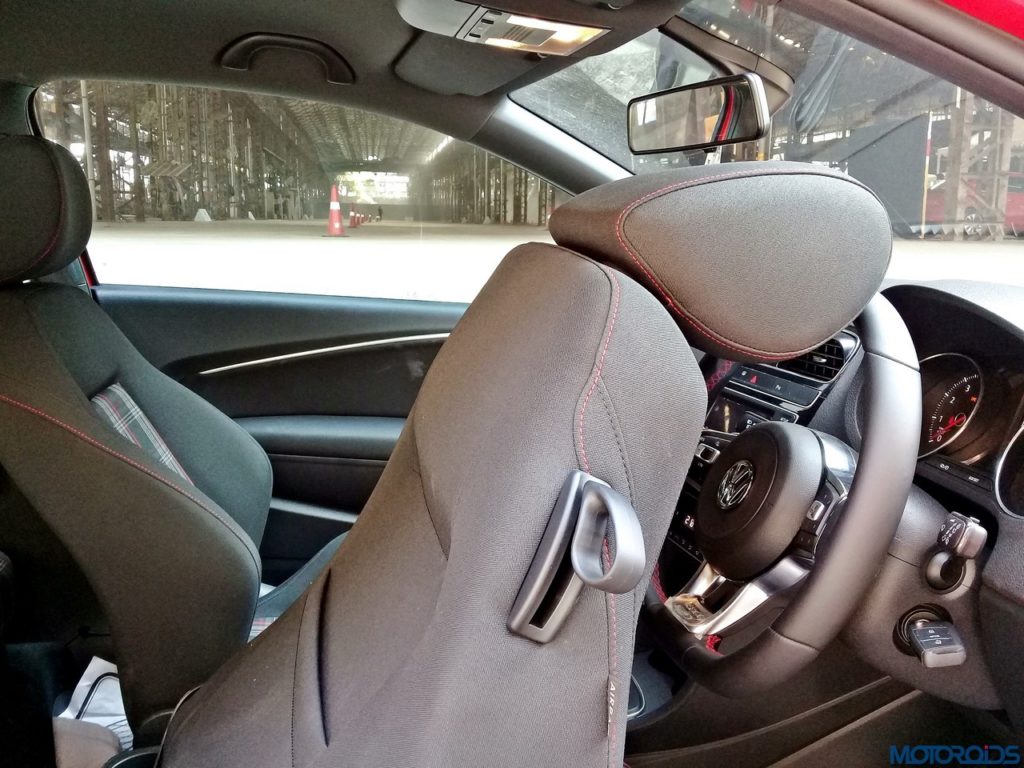 To get in the back, you simply have to flip the front seats down and slide them forward. It’s a relatively easy process. 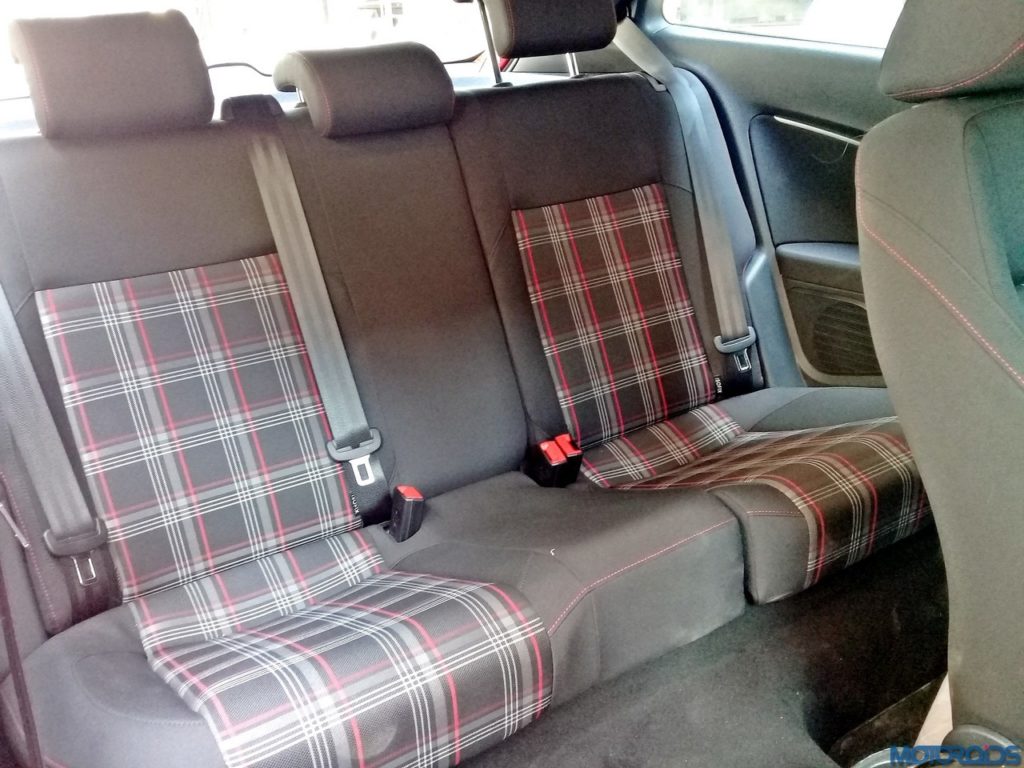 Space at the back is the same as a standard Polo because the wheelbase remains the same, and you also get 60:40 foldable rear seats. 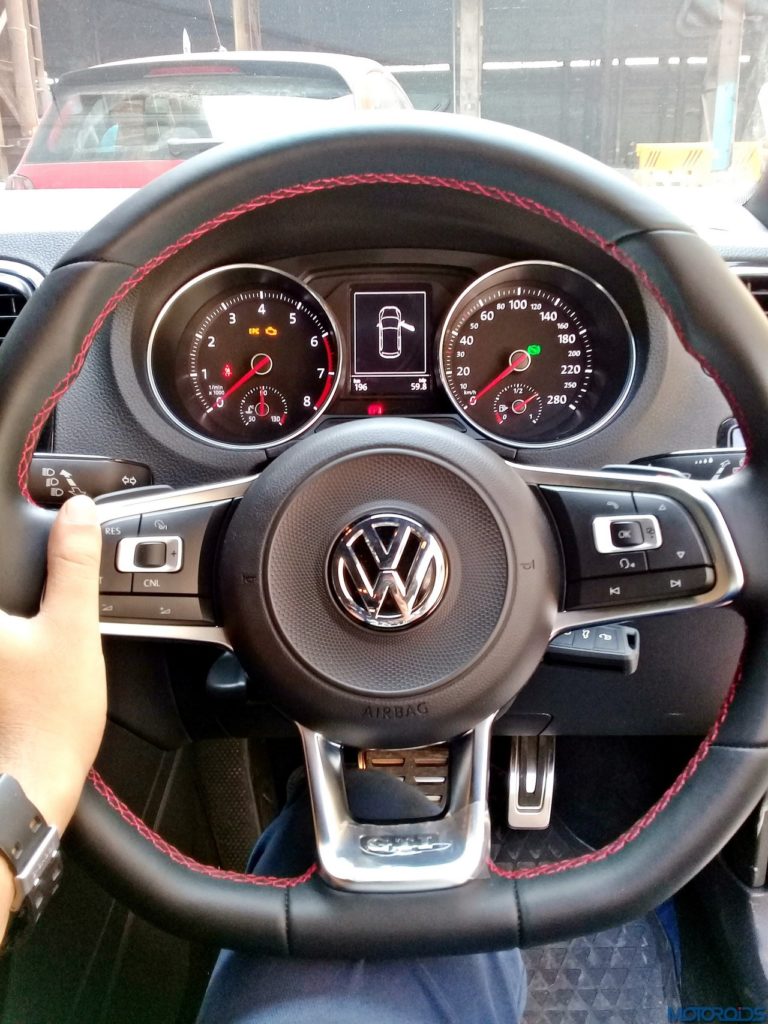 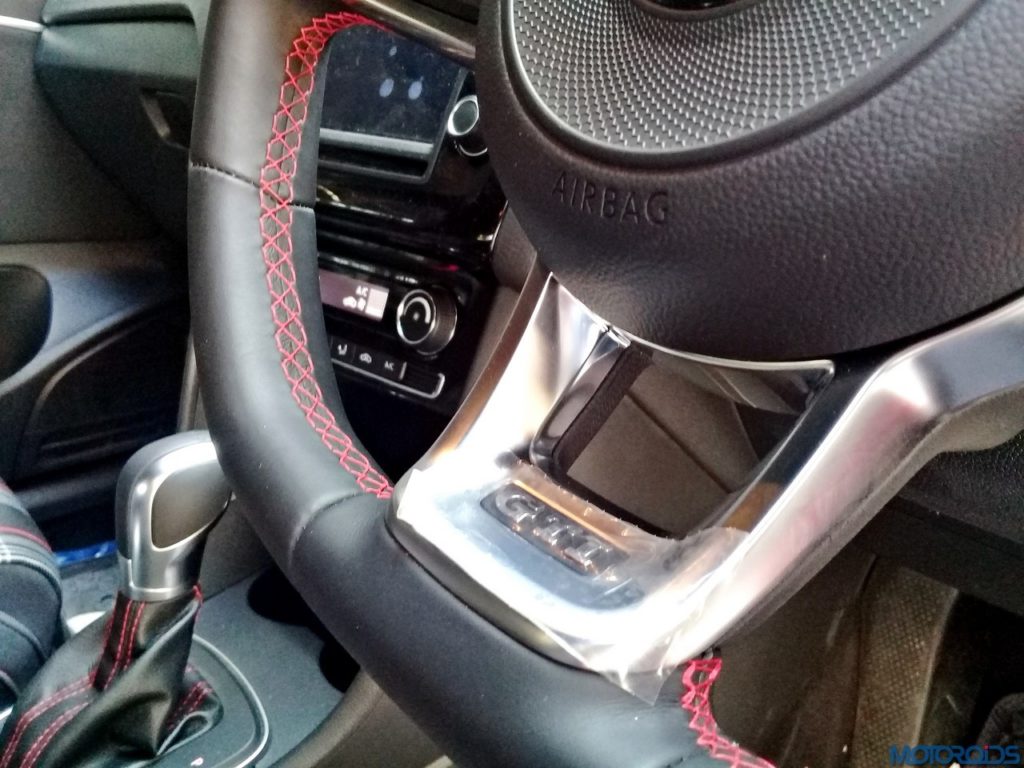 Apart from being tilt and telescopic adjustable, it also says GTI. 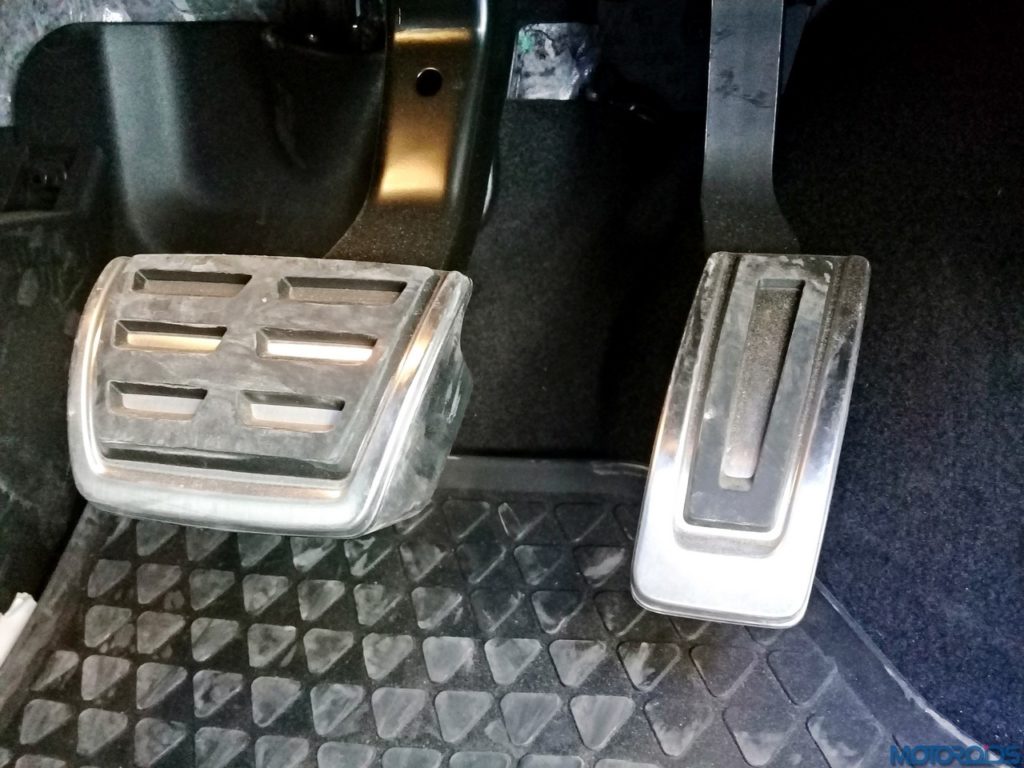 Pedals in the GTI comes in brushed stainless steel.. 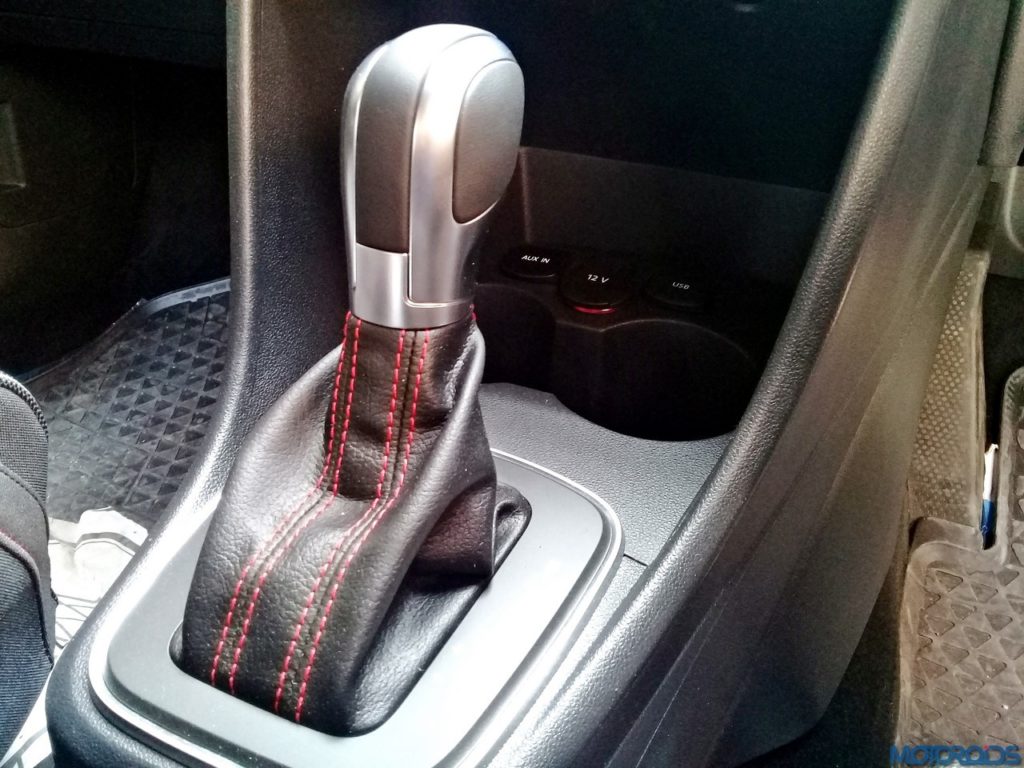 ..while the headliner, grab handles, sun visors, and pillar lining are all done up in black,  Even the hand brake lever handle and gear selector lever is done up in black leather. 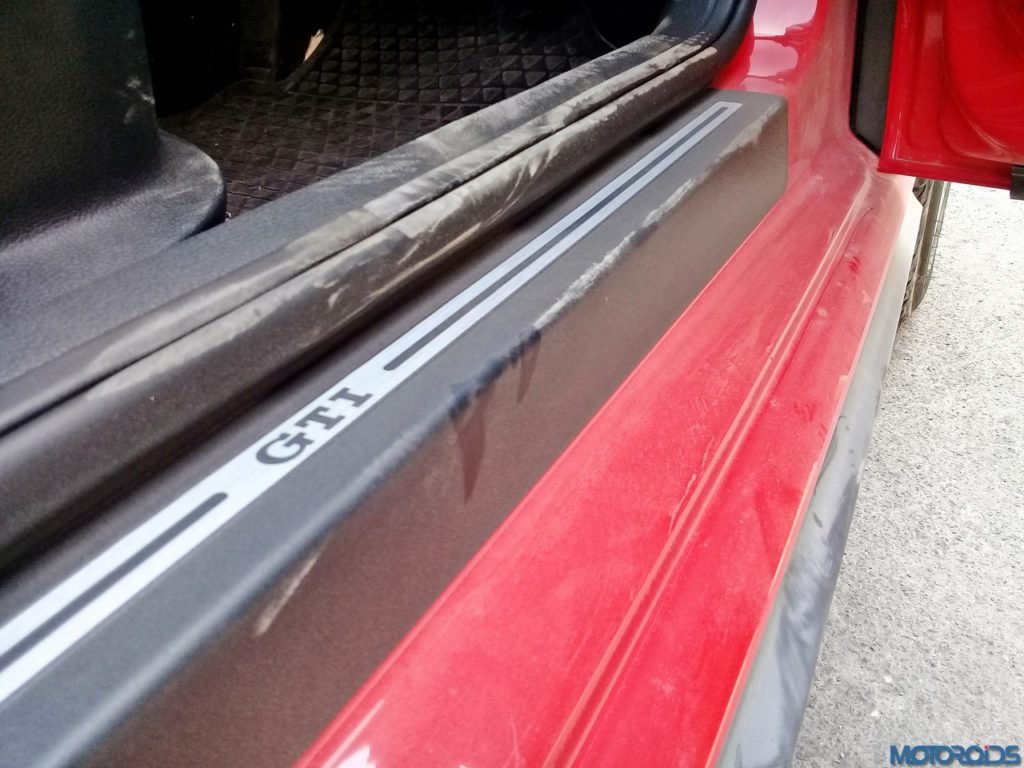 The door sills say GTI as well, but not in a INR 27 lakh way.

Of course, the GTI gets all the usual appointments like climate control, cruise control, central locking with remote key, power-adjustable and heated exterior mirrors, 12 V power outlets, a 6-speaker sound system and a 6.5-inch touchscreen infotainment setup with Aux-iN, USB, Bluetooth connectivity. Too bad it doesn’t come with an engine on/off button. 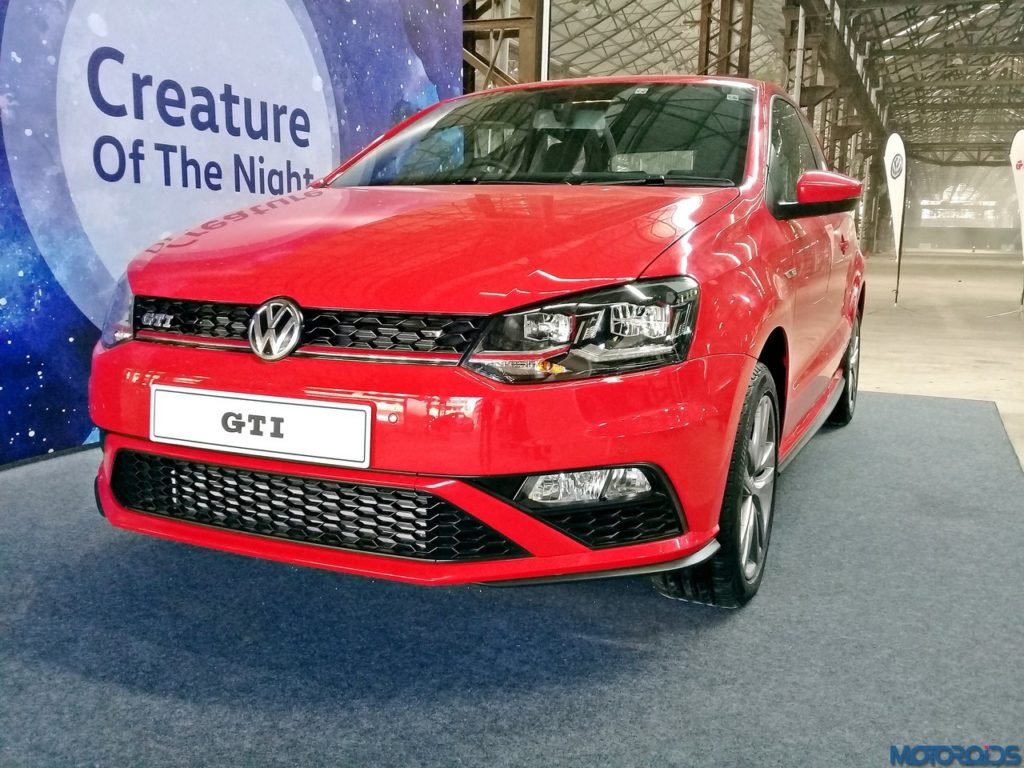 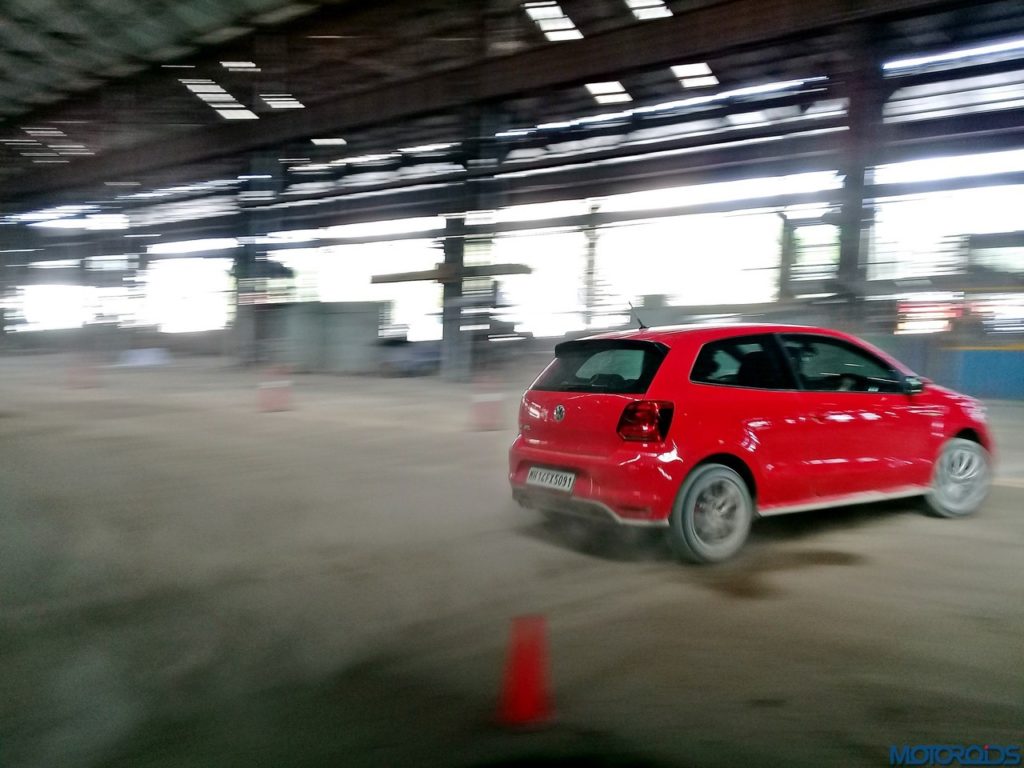 We got behind the wheel of the Volkswagen GTI for a brief while to get a taste of India’s hottest hatch. But first, what’s it made of? The GTI gets a 1.8-litre, turbocharged petrol engine (TSI) good for 192 PS of power and 250 Nm of maximum twist available from just 1250 clicks. For the GTI, VW claims a 0-100 kph time of 6.9 seconds and a 236 kph top speed.

This four pot motor, developed by Audi, is the third generation of Volkswagen’s EA888 power-plant. It already does duty under the hoods of numerous VAG wares, including VW models like the Jetta, Golf, Passat and Beetle; Skoda models like the Octavia and Superb; along with Audi models like the A3 and A4. 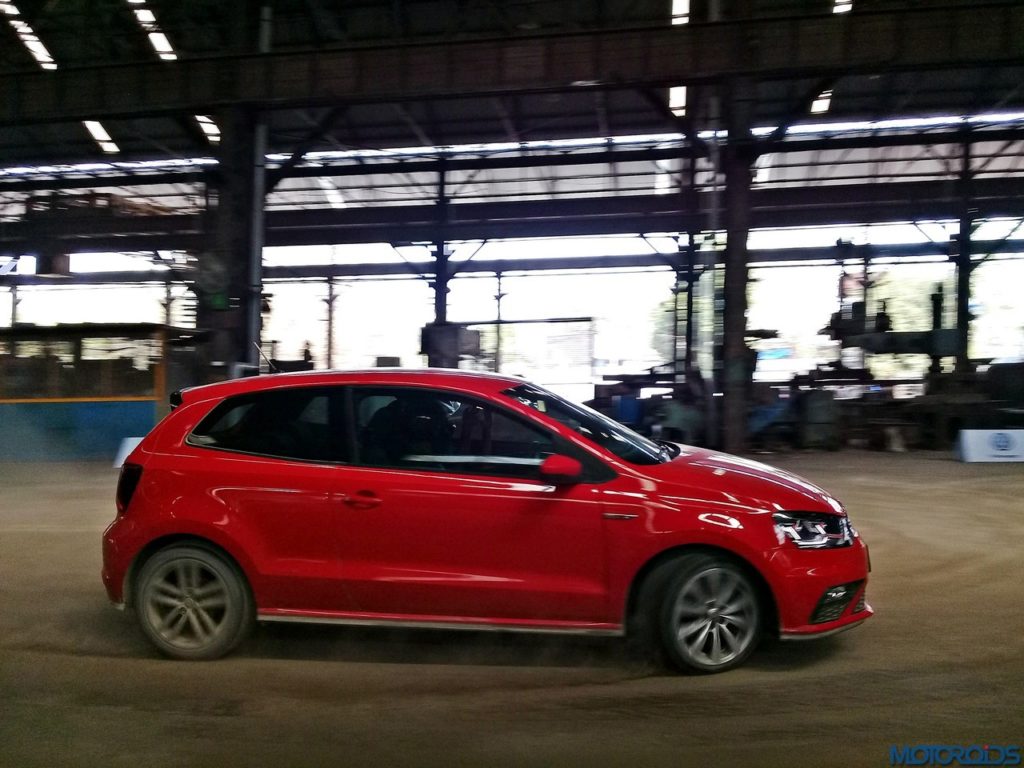 It’s fast. There are no two ways about it. It just picks up its skirts and goes. Imagine two, no three times faster than a GT TSI. But there’s no drama whatsoever. The steering wheel doesn’t threaten to tear you arms off as it grapples with torque steer like in, say, the Abarth Punto, the ride is as smooth as a baby’s bottom and the exhaust note is merely a muted growl. 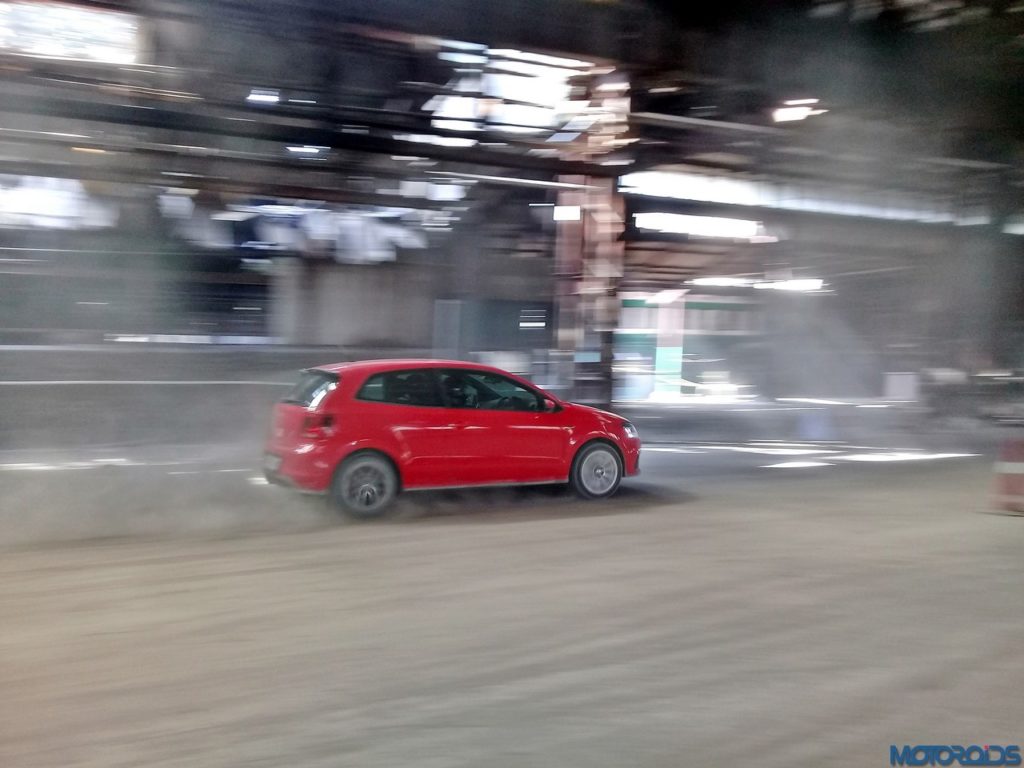 But one prod on the throttle reaffirms the fact that this is too big a motor to be sitting inside a 1273 Kg Polo. In spite of forced induction, there’s this deep-rooted linearity to the power delivery, and it never feels laboured. The big engine revs out pretty quickly, and is not a screamer – it just delivers effortless pace.

It also masks that pace very efficiently, and before you know it, you’ve reached barely legal speeds without the slightest of fuss. The 7-speed DSG (with steering mounted paddle shifts) puts the cogs in place with clinical precision and stupendous quickness, as the GTI barrels towards the horizon with the potency of a miniaturised, fast Audi. 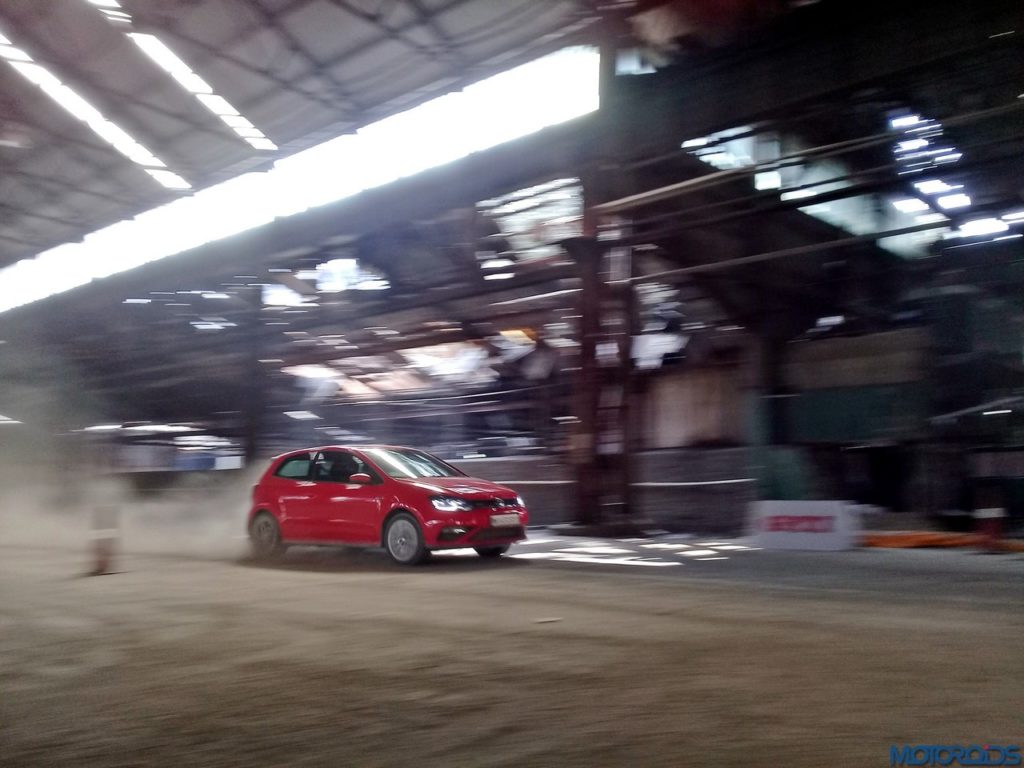 From our brief drive, it’d be safe to conclude that body control around the bends is superb, and the GTI stays more planted than a standard Polo. For the GTI, VW has stiffened up the anti-roll bars and dropped the Polo’s ride height by 10mm at the front and 15mm at the back. However, the electro-mechanical steering system came off as a bit lifeless.

We also got to ride shotgun in the GTI with ace Volkswagen Motorsport driver Sulaiman Shaikh, who piloted it around a slalom course with relentless gusto. The GTI demolished the course with trained athleticism, with its XDS+ electronic front differential lock (which mimics torque vectoring) and stability control systems keeping things under check.

We look forward to spending some more time with the new Volkswagen GTI to uncover its nuances and deliver a full road test review. Stay tuned!