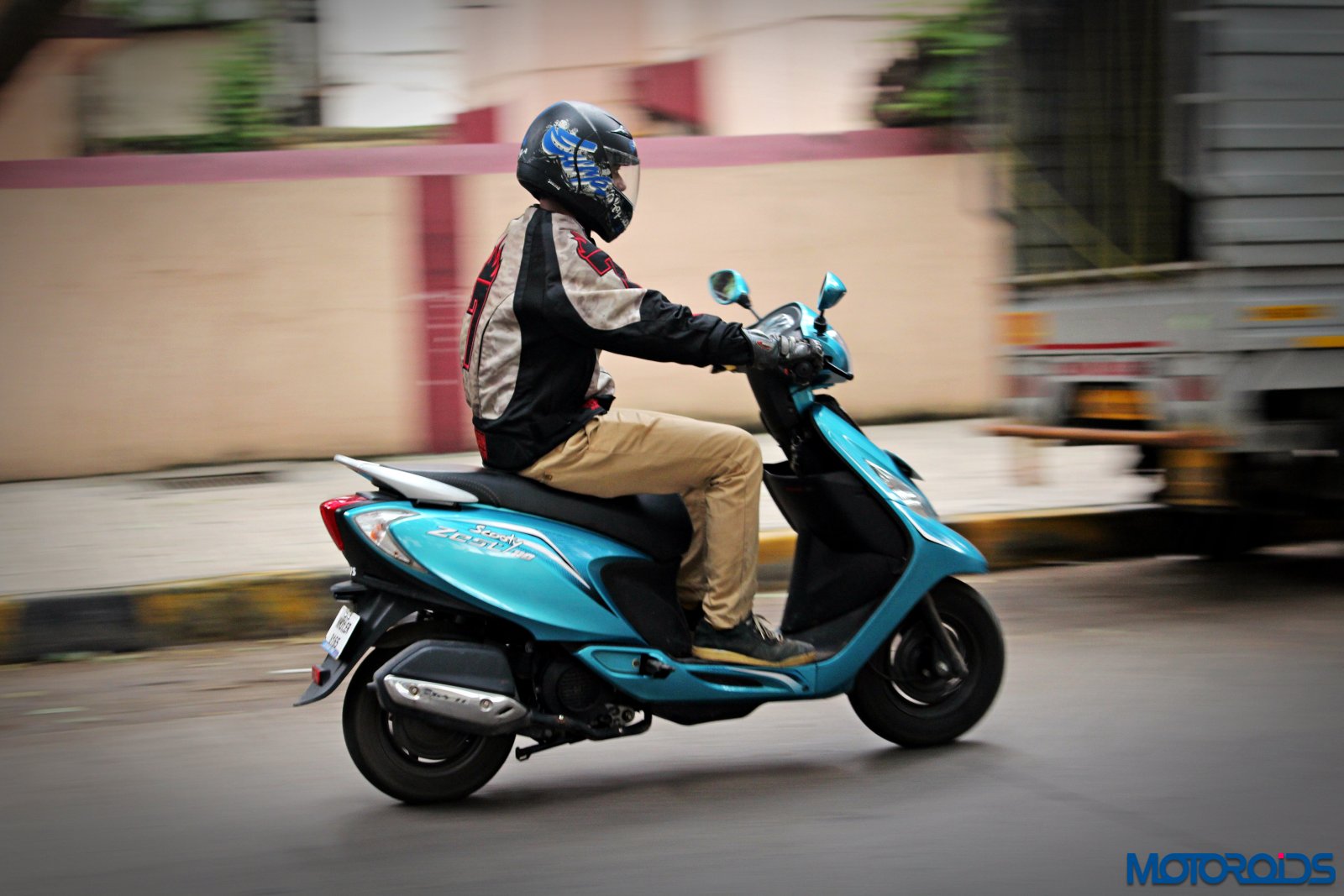 Just yesterday I wrote a story for our newly-launched sister site Gizmoids about Adobe being bothered about its proprietary and trademarked brand-name “Photoshop” becoming a generic name for any digitally manipulated image. Writing that report I wondered why they didn’t see it as a compliment-the fact that Photoshop has become the industry standard, a name so ubiquitous that it has transcended the realm of professionals and seeped into mainstream popular culture. Digging a little deeper, I found that Adobe had clear grounds for its worry. Xerox didn’t like it when its trademark became a generic name, neither did Google and Bayer, the last one the maker of the now commonplace aspirin.

TVS’ success with its Scooty brand is something on similar lines. Since its launch in the nineties, the Scooty has revolutionized commuting not just for millions for college girls, but a vast number of urban commuters of both sexes. Here was a four-stroke (initially two) scooter that had space to carry your groceries and some notebooks, was reasonably frugal, and was a hoot to ride in the city thanks to its gearless variomatic transmission. The public lapped it up. 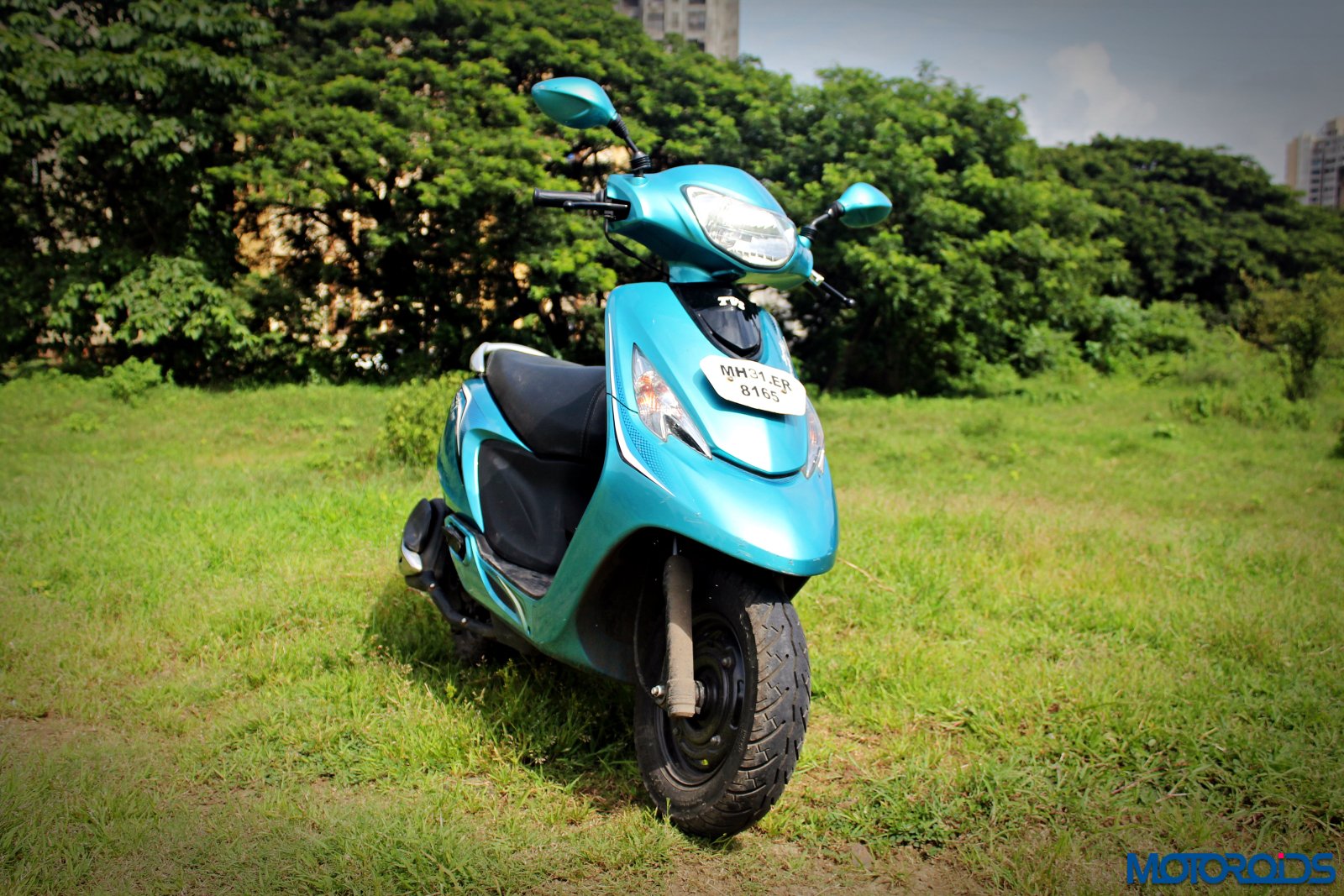 We don’t know how TVS Motors feel about the Scooty name now being used to denote everything from Honda Activas to Kinetic Blazes to Vespas but their accounting department surely can’t be complaining. Ever since its launch, the Scooty has been in continuous production and TVS has kept it fresh over more than two decades with timely updates, both cosmetic and mechanical.

This one here, though, was an all-new machine upon its launch. 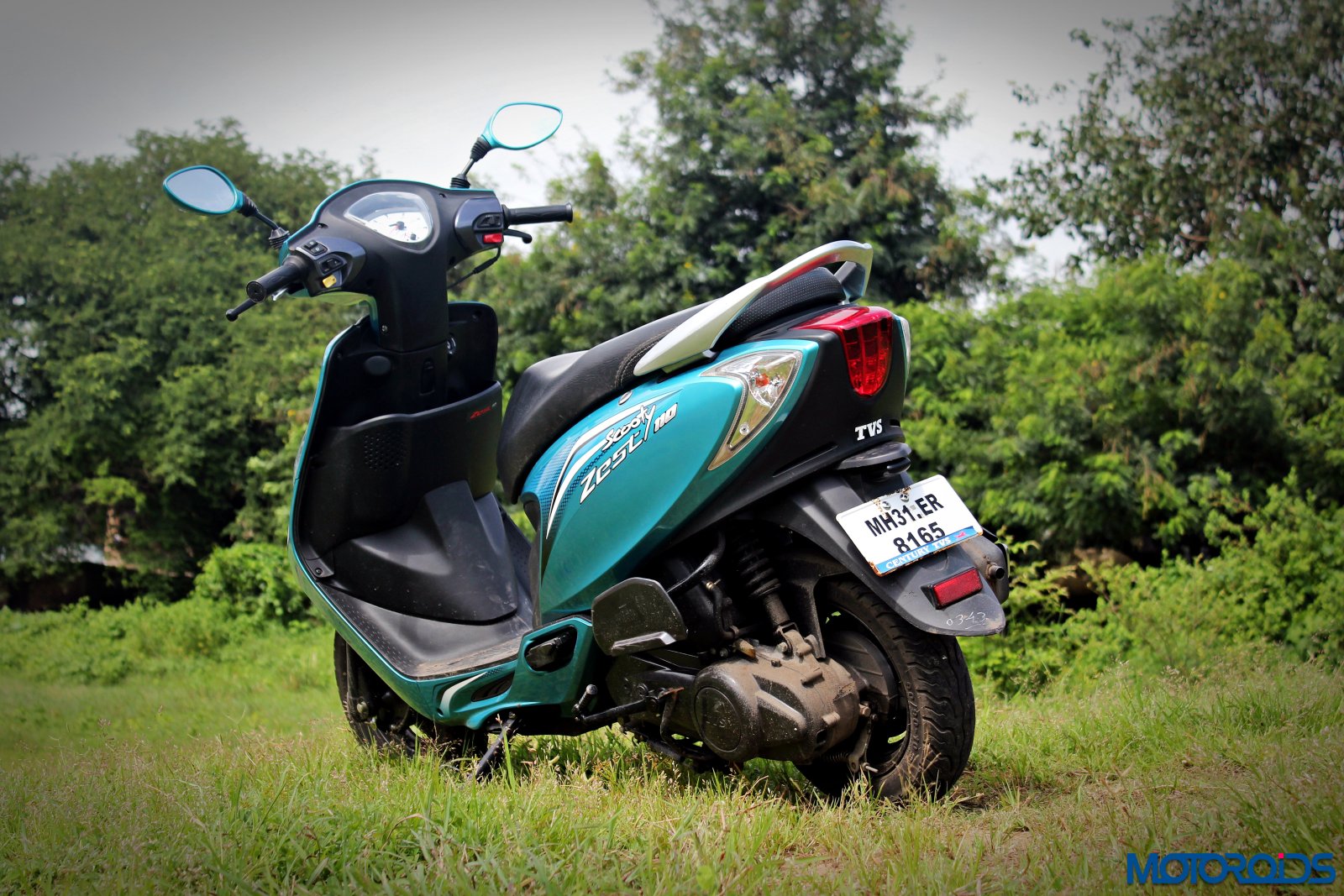 The design has also been updated to keep up with the latest trends and it looks pretty, especially in that signature turquoise, without being overly feminine. It is still a Scooty- as evident in that integrated and elongated front fender-but one that has been updated to present day. I personally dig the side profile the most. Stylish albeit understated scoops and cuts along with minimal stickering make the Scooty Zest 110 one of the best-looking scooters in the market today.

The folks at TVS had the Scooty for delivery in Pune so I picked it up from the showroom and it became my long-termer by default. Despite the proven advantage scooters have over motorcycles for commuting, I wasn’t too enthusiastic about riding one. I like shifting gears manually, using the upper part of the rev range to surge past slow moving auto-rickshaws and sleepy call-center cab drivers. I like the superior handling and, finally, there’s the manly feeling of having something between your legs. 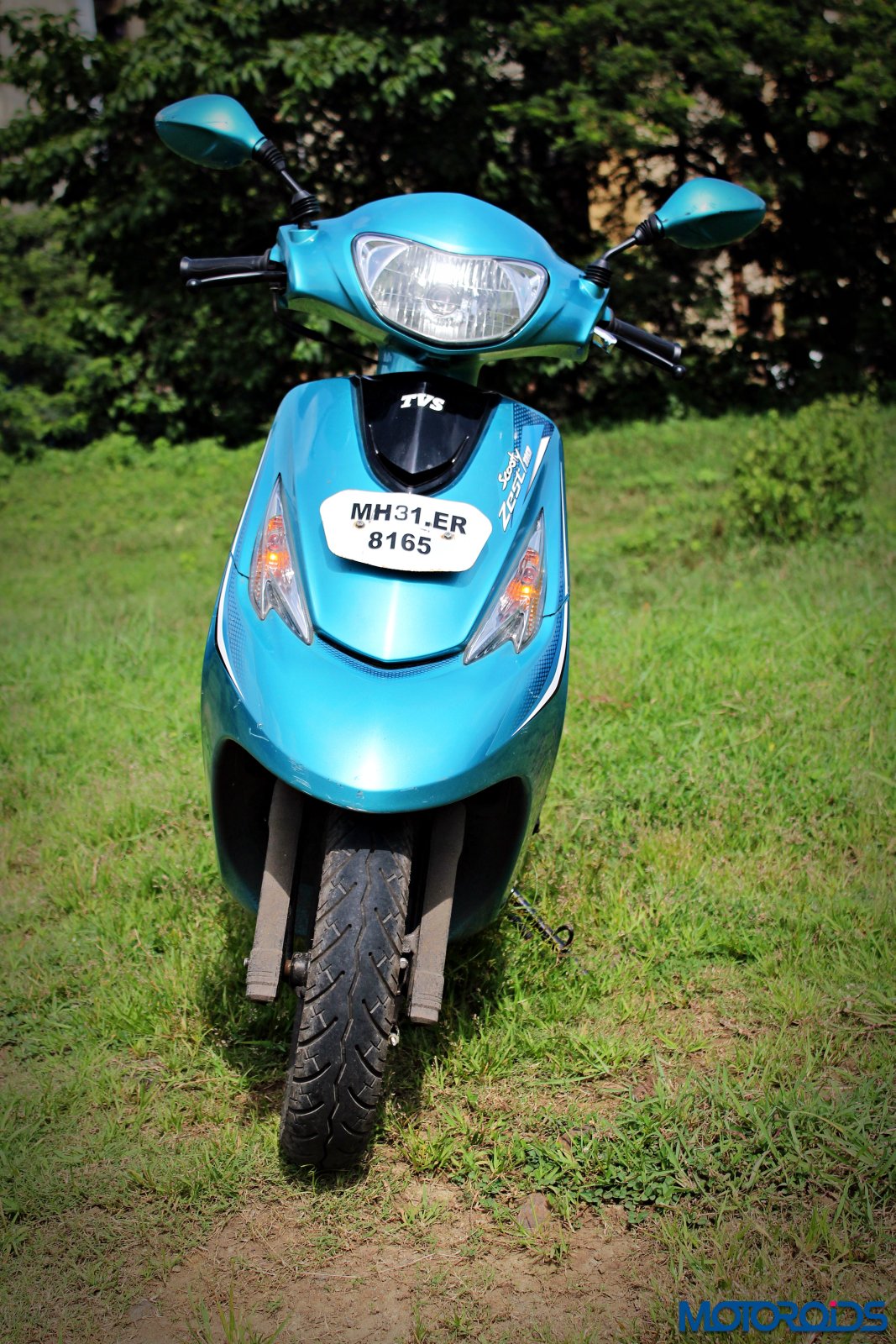 Then I moved to Mumbai. I needed a long termer now more than ever and so, after two weeks of commuting to the Motoroids office in auto-rickshaws, I went back to Pune to get the Scooty. The ride back, almost all 150 kilometres of it, the rain gods refused to show any mercy on the two of us. But it was this ride where I fell in love with the scooter.

Even on the superbly-paved NH4, it is impossible to go above the ton mark in the monsoons safely, with visibility at a minimum, and fog and mist swirling around me. So I decided to take this rain-soaked ride as an opportunity to just cruise slowly, take in whatever I could see of the scenery, and maybe do a little introspection on my new responsibilities at the Mumbai office. 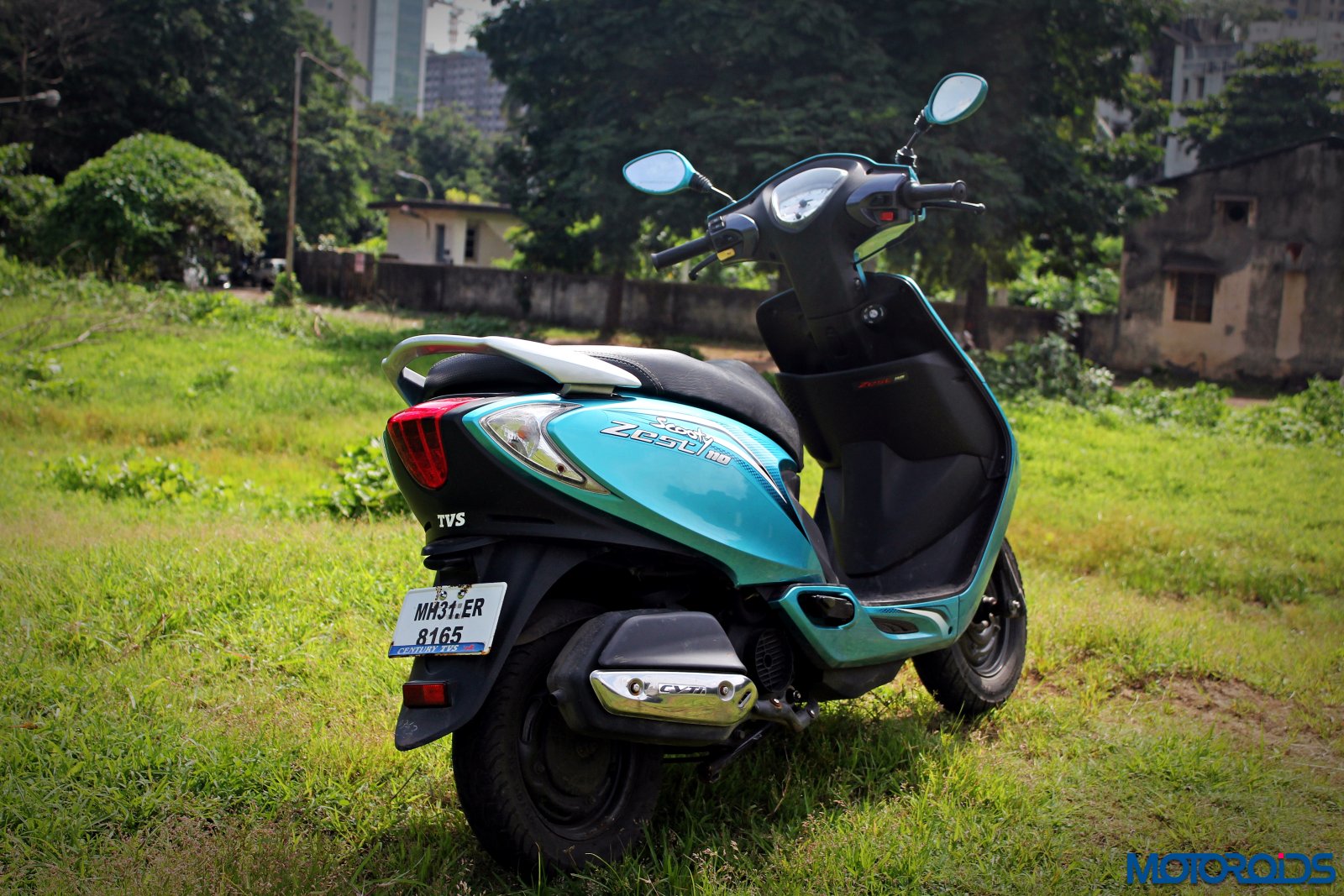 Once I entered that zone, the Scooty proved to be the perfect accomplice. The footboard did a fine job of keeping the mud and rain away from my legs, and the relaxed riding posture meant that I could keep on riding without breaks even in this weather. And when I did stop for a break, I could stash my full-face helmet under the seat – something that few scooters can claim to do.

It has been a month now for the Scooty and I in Mumbai, and we are both warming up to the city. The engine is zippy enough for my daily commutes, and she’s decently frugal for the fun and convenience she offers, although I haven’t had an opportunity to test her fuel efficiency yet. The fuel filler cap is also located under the seat, all of which translates into rather frequent and long trips to the petrol pump. 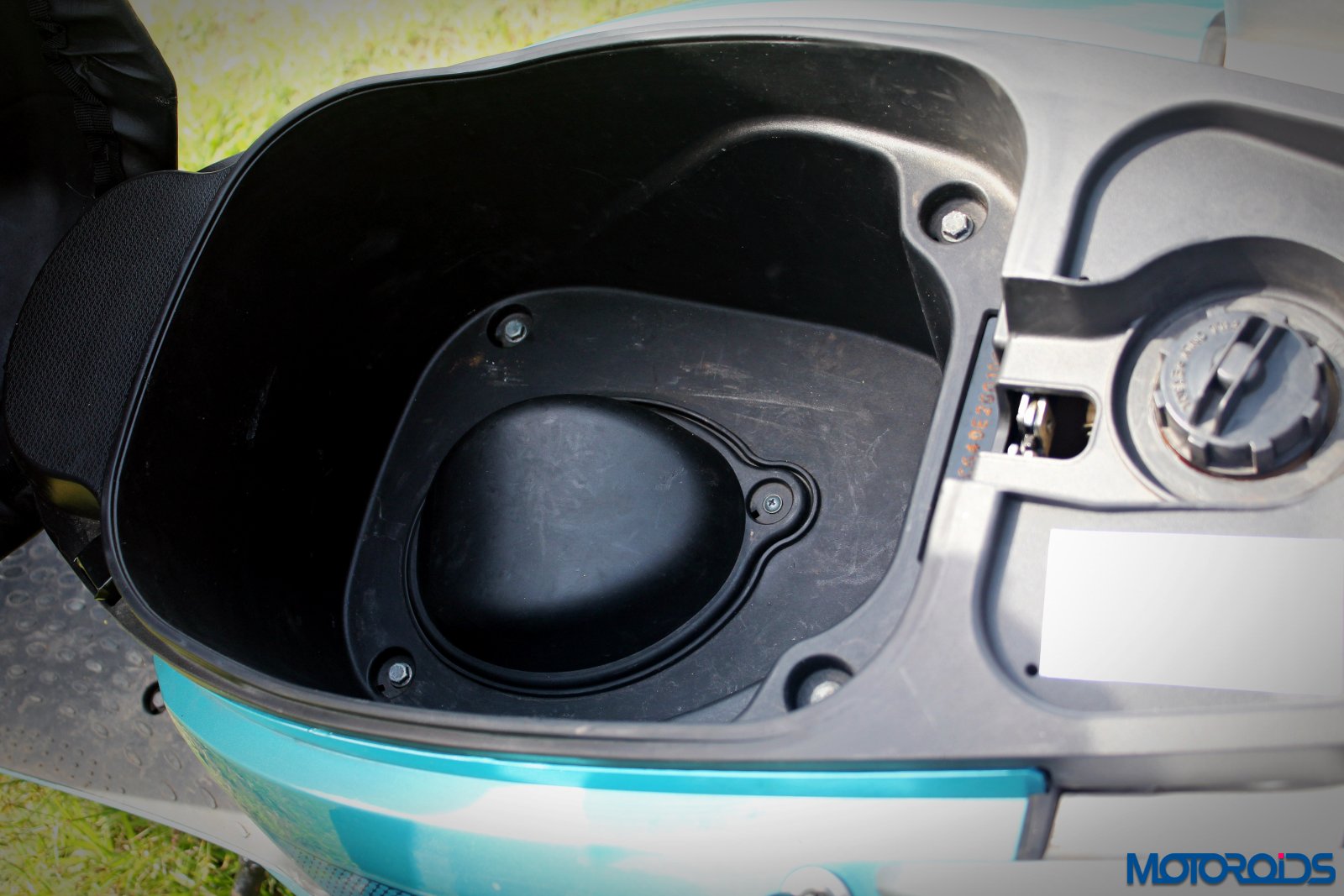 But that aside, I like the fact that I can now carry my MacBook Air and some other stuff to work, and buy groceries on the way home from work, without lugging along a backpack.

When you are commuting daily, sometimes with bleary eyes and sometimes before you’ve had your caffeine shot, the last thing you want is an involving riding experience day in and day out, no matter how committed a biker you are. The weekends (and trackdays and new review machines for us) are there for that. This is where the Scooty proves itself as a trusty workhorse, a machine that will transport you from A to B in comfort and convenience, and with no drama at all. It is the unobtrusive wingman, the trusty friend that is happy to stay in the background if its presence is not needed, but can rise to the occasion when needed.

The rains have been clearing up in the last few days, so my wingman and I have many more adventures to experience in this city of dreams, the city that never sleeps.