Oh did we love the Tiago when we first drove it during its media drive in Goa. Smart looking, well appointed and bristling with two brand new petrol (Revotron) and diesel (Revotorq) engines Tata has developed from the scratch – the Tiago was the first completely ground-up platform in a long time for Tata. And boy, have they pulled a stunner this time.

Beautifully styled, compact, practical, well priced, fuel efficient and built solid, the mounting sales numbers of the Tiago are testimony to the unmatched virtues of this car. Our long term Tiago has been with us for more than a month now, has logged more than 3,000 km, and we cannot stop gushing about what a phenomenal product it is. Here’s why we think this little car from Tata Motors is arguably the most striking of the hatchbacks in its segment, including the ones slightly below and above its class. 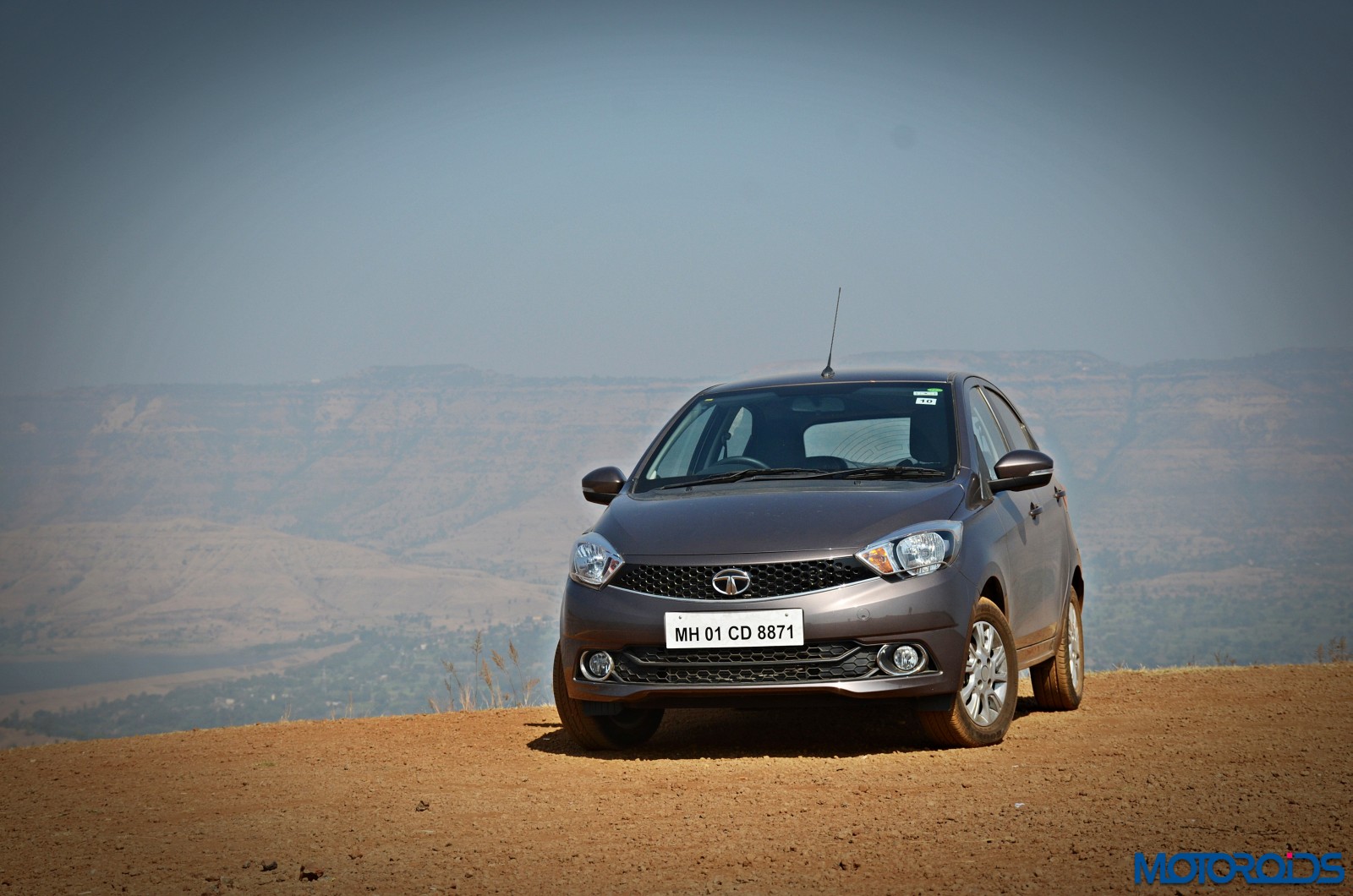 Let’s start with the looks. I have been associated with the Industrial Design Centre of the IIT, Mumbai for some time now and the way one of the professors from the hallowed institute describes this car is a tribute to the long way Tata has come from the times they used to be termed a truck manufacturer. “Looking at this car, I feel it’s the first time a car manufacturer has paid respect to the car buyer in the small car segment” – said my colleague who’s had his training at some of the finest international institutes of car design. And we’d have to agree, for we love the way our Tiago in its Espresso Brown shade looks. 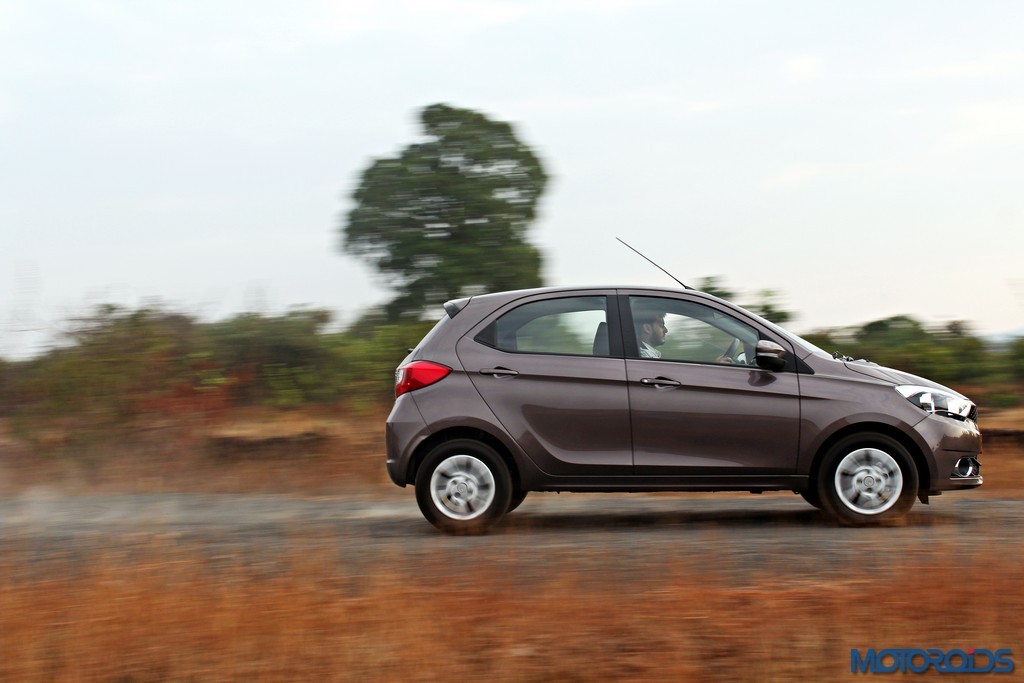 Looking at those inch perfect proportions, the detailing, the quality of finish and the way this machine seems just right from angles, the Tiago makes you wonder if it was indeed designed in India. Insiders tell us that international teams were behind the project, including senior stylists from France along with a whole team of experienced car designers. Origins aside, we simply love the way this car looks, and in a world of contorted lines and weird styling elements, the Tiago manages to rise above the rest as a tastefully styled machine, and is the best looking machine in its segment beyond argument. 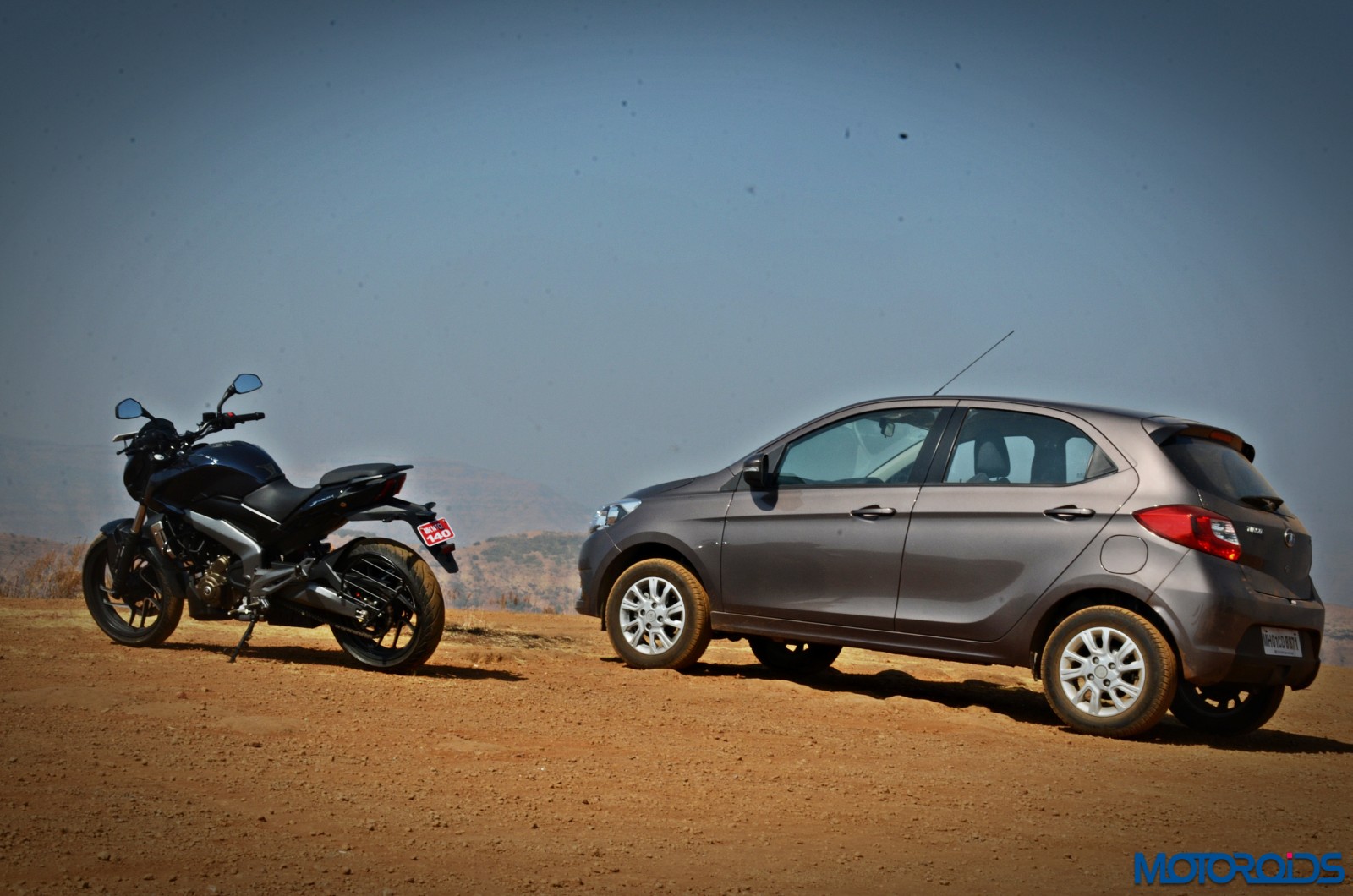 Our test car has logged about 3,000 km in a period of a little over a month. We got the first service done at 1,000 km and the machine has been running like a dream all this while. 3,000 km is quite a bit for a single month, though, and there’s a reason why the Tiago is logging heavy mileage. It has accompanied us on shoots in all directions around Mumbai. From the Dominar 400 shoot in Mahabaleshwar, Bajaj V12 first ride in Pune, 2017 KTM RC duo test at Bajaj’s Chakan track to Audi R8 V10 Plus and Ducati Diavel Carbon Road tests towards Nashik, the Tiago has been our tracking and support vehicle ever since it arrived. 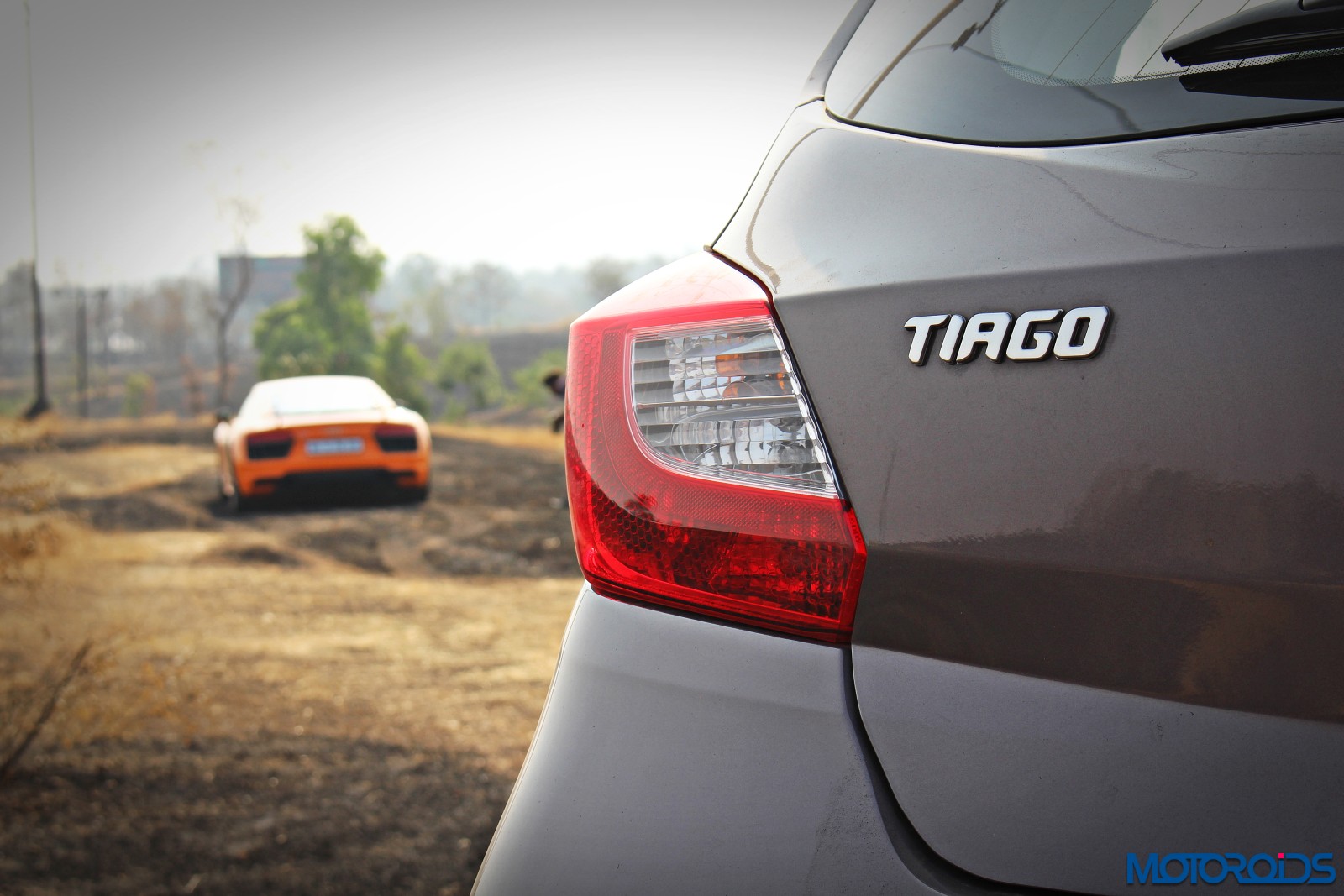 Part of the reason why we like it for photography is because of its cavernous boot, which fits Abhijeet, our rather tall photographer in it without a problem. The rear hatch stays open and doesn’t swing with the wind even when the car is moving and the low loading lip of the boot allows abhijeet to take his lens down and get a nice motion blur on the tarmac with ease. 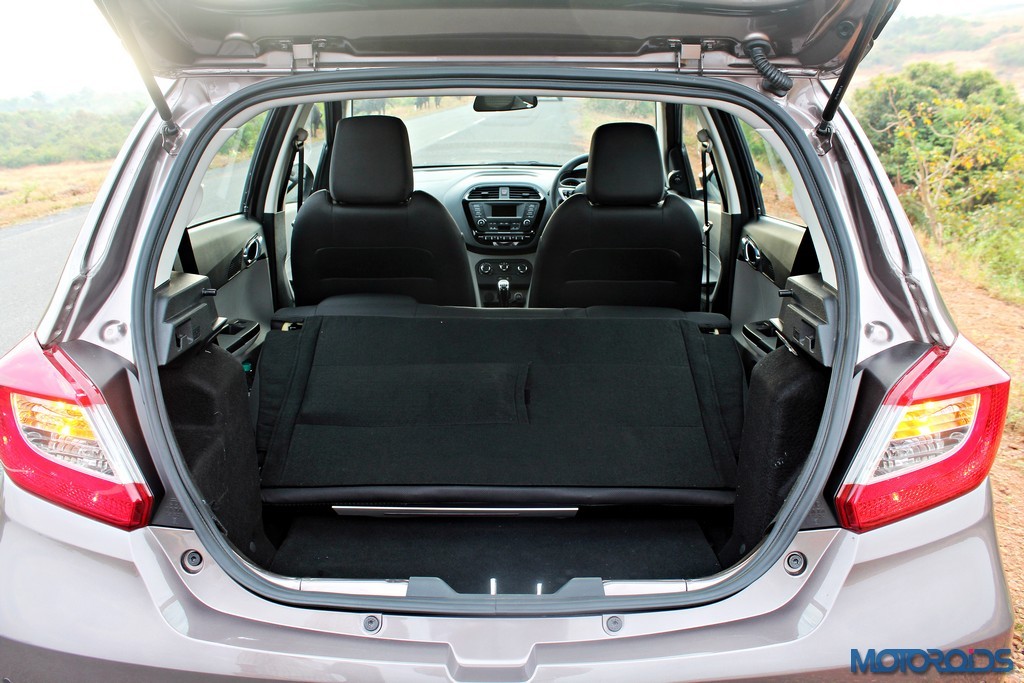 The 1.05-litre, three pot motor with 69bhp of power and 140 Nm of torque is surprisingly perky for its size and is appreciably linear too. The icing on the cake is the car’s phenomenal fuel efficiency which never makes us think twice before picking it as the support car of choice while going out for a long-ish test drive.

Now, I am a very practical and safety oriented driver and don’t like hustling unless there is a real need for it. During the past one month, though, there have been two instances where I had to push the right pedal, and that’s when I was properly introduced to the Tiago’s uncannily good handling for its size. 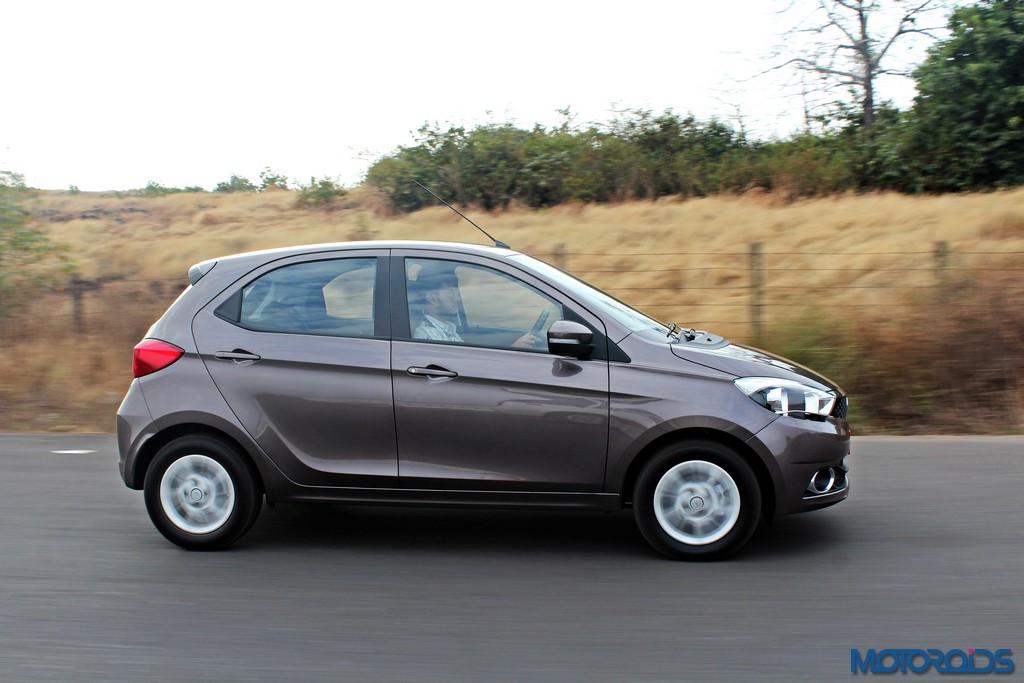 The first occasion was a dash to a star hotel in Pune on a rather confused evening. We were late and had to come back to Mumbai before a certain time. That was the first day the Tiago exhibited its ability to stay unperturbed even at the limit through the mostly sweeping and sometimes tight bends of the Mumbai Pune expressway. It was amazing how this little machine felt planted like a rock even when made to take those bends at the upper limit of its speed. 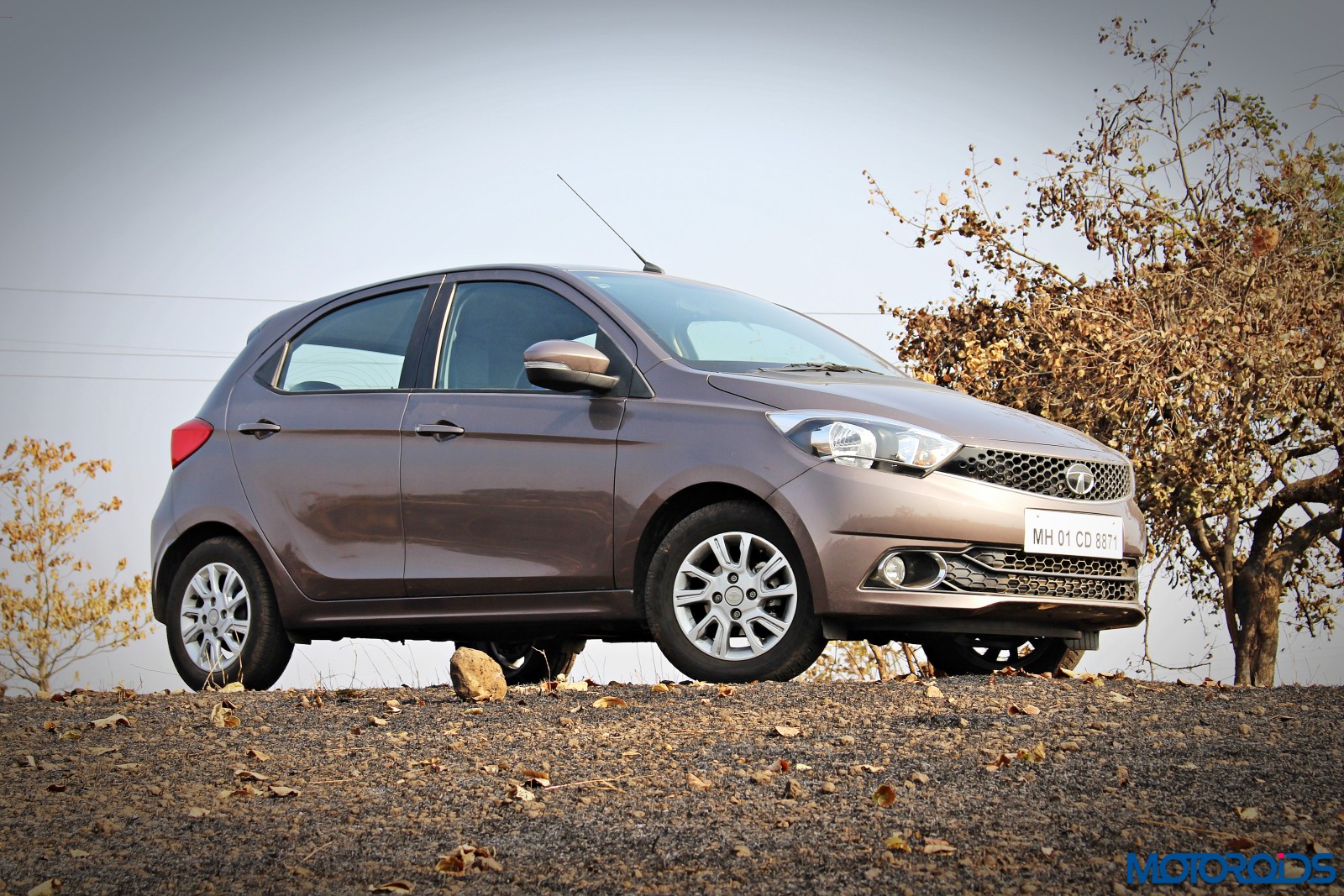 On another occasion, we had to make a last minute purchase for riding boots before leaving for the 2017 RC390/RC200 duo test ride at Bajaj’s Chakan plant. After wasting more than an hour in pursuit of a suitable pair, we were left with an almost impossibly small amount of time of make it to Pune. Thankfully, the traffic gods were smiling upon us on that fateful Friday afternoon. So with a barren expressway ahead of us, we unleashed ourselves on the Tiago relentlessly in pursuit of meeting the KTM crew at the promised time. The kind of sure-footedness in terms of resistance to roll, steering heaviness, grip and composure around bends this machine exhibited that day made us want to call the blokes at Tata right away and ask them to take a bow. What a package for such a small price! 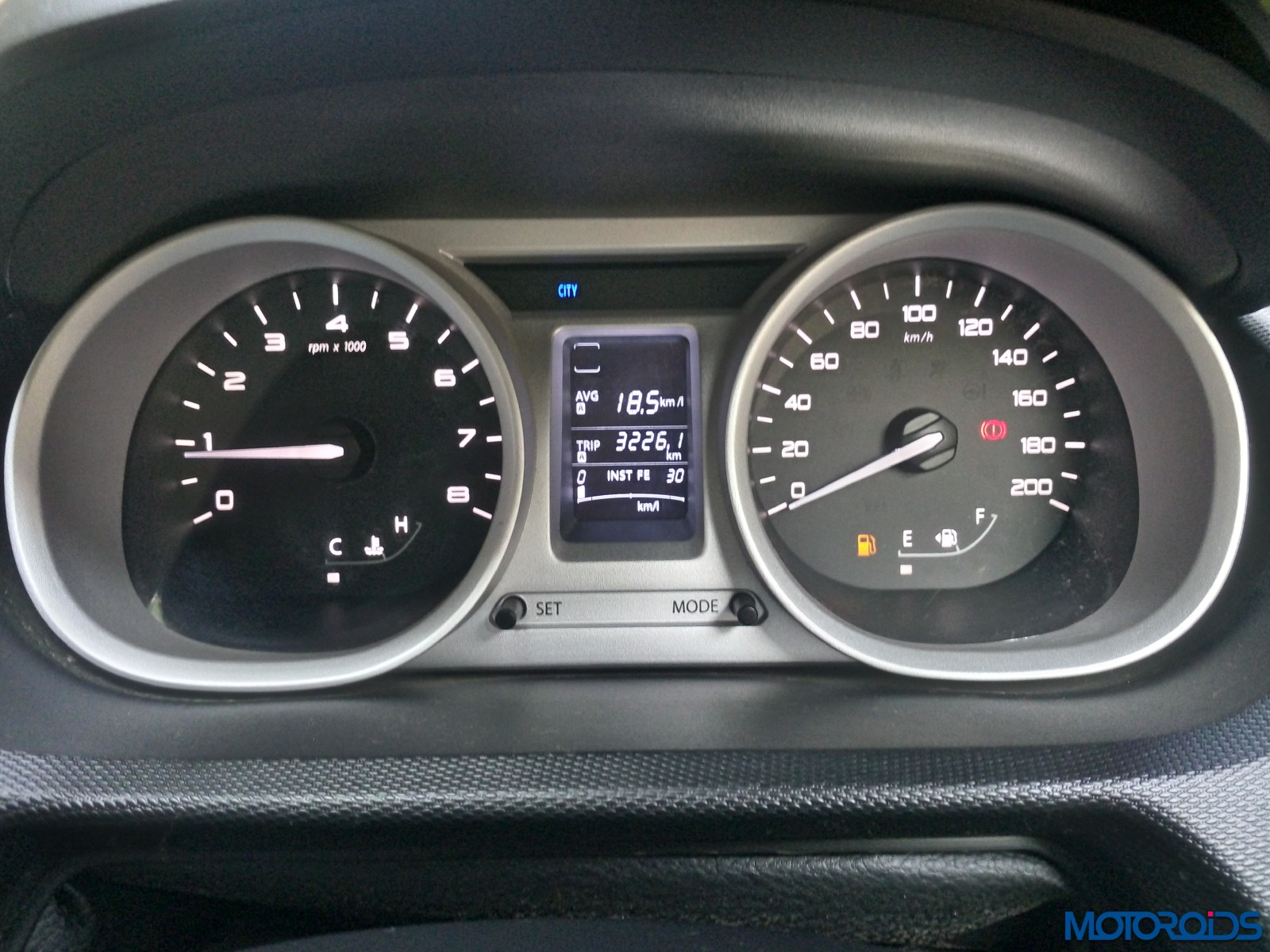 An 18.5 kmpl fuel efficiency through its entire lifetime with us. Impressive, knowing we never drive with a light foot!

The funny thing is, despite all that torture, the average fuel efficiency never dipped below an exceptional 18kmpl. With a lighter foot, the Tiago is capable of deliver 22kmpl + on a highway, which it does on our routine shooting runs.

The new three pot motor is probably the biggest achievement of Tata Motors in the past few years. Built from the grounds up, that engine is just right for this sort of an application. Sure, the turbo gets properly spooled up at 2000 revs, but there is enough juice available from as low as 1200 revs to set this little baby rolling with confidence, the throttle response is laudable at low revs and the momentum keeps building progressively before you experience that pronounced step up when you cross 2000 clicks. Point being, that diesel motor has enough low end punch to keep you trundling along in higher gears all day long in slow moving traffic with no signs of breathlessness or cabin boom. And then there’s that fabulous fuel efficiency. We could probably have done with a bit more refinement, but we’ll give this one to Tata, as three pot motors the world over, even from the top drawer manufacturers are never as silent or refined as their four pot counterparts. 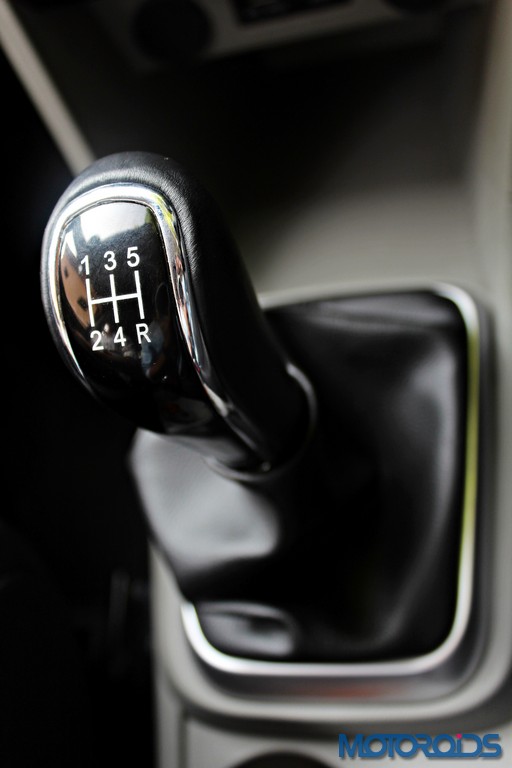 A special mention needs to be made of that incredibly smooth gearbox which baffles us all the more. Is this really a Tata ‘box? For it really outclasses anything in the segment and above in terms of fluidity, feedback and precision; and we absolutely love its short throw as well. You’d really have to use it to figure how good it is. 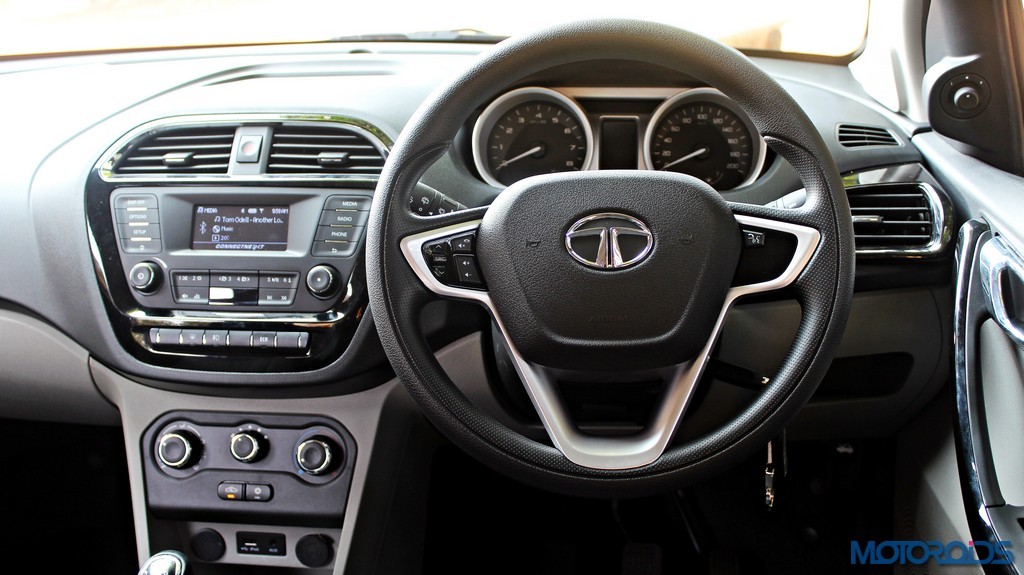 On the inside, we love the comfortable, supportive seats, the all black treatment mated out to the plastics on the dash. Every material here reeks of quality – no hard plastics or open edges to be seen. Soft touch materials abound and the finish everywhere screams premium. The trip computer has loads of information to display and it keeps delighting you every time you switch to the average fuel efficiency view.

One small gripe we have is the lack of a full sized one-litre bottle holder in door panels. On a field day, when the sun is showering fire, the team is often found fumbling to find a place where to put that water bottle. 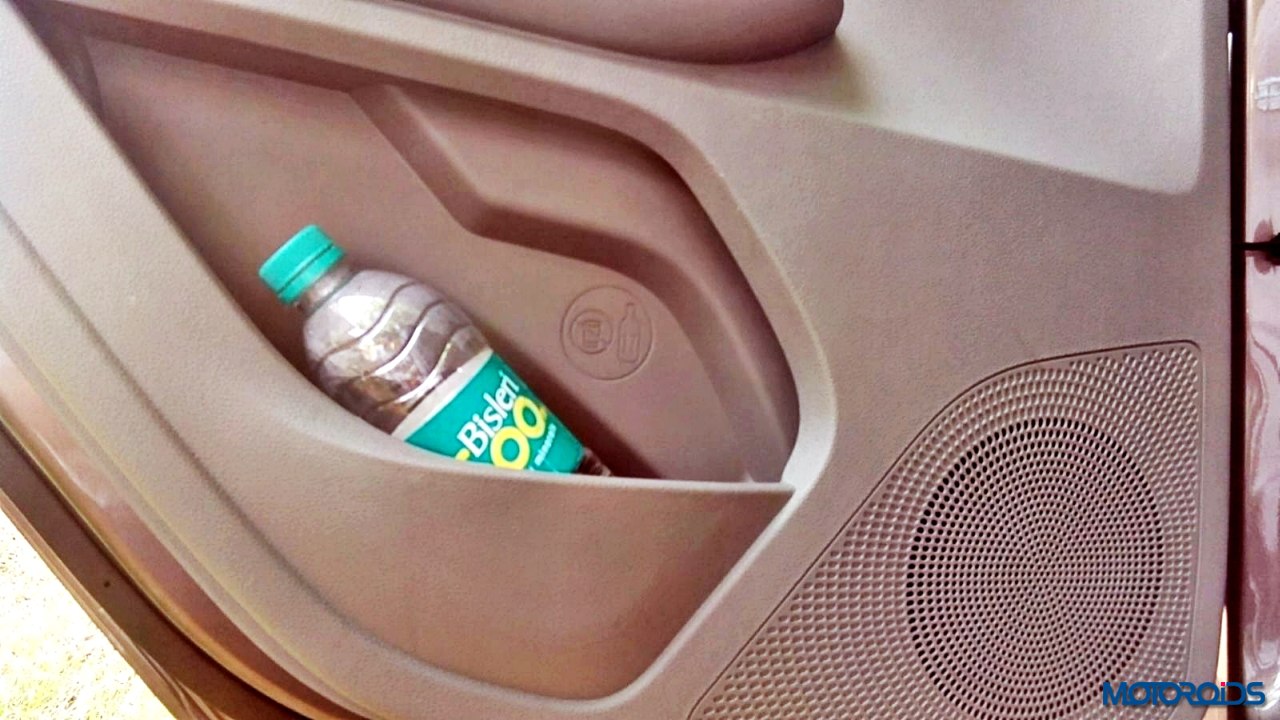 The space inside is commendable for the size, and there is ample knee and headroom even for those with a height of six feet plus. The Harman infotainment system sounds crisp and stands head and shoulders above everything else in the class. It also boasts some unique features and plays with a variety of input devices. 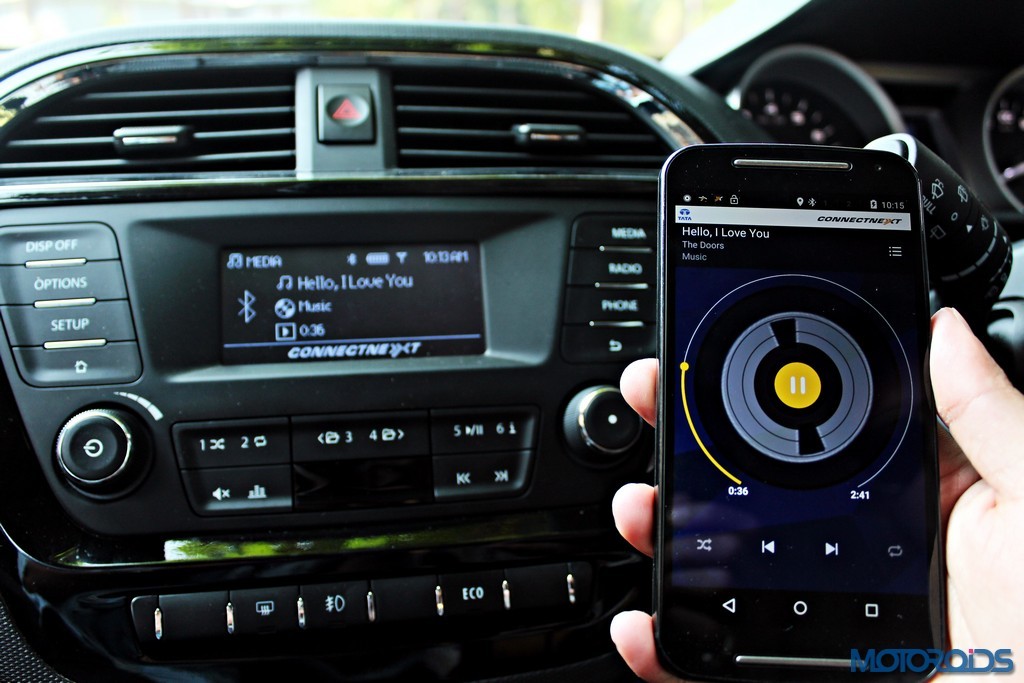 You can use the Juke-Car app for the Tiago. It’s a first-in-class feature which makes use of the mobile hotspot to create a virtual network and host a service for sharing list of available songs in the device. You can connect up to 10 smart phones at the same time, and users can place their requested song in the queue. 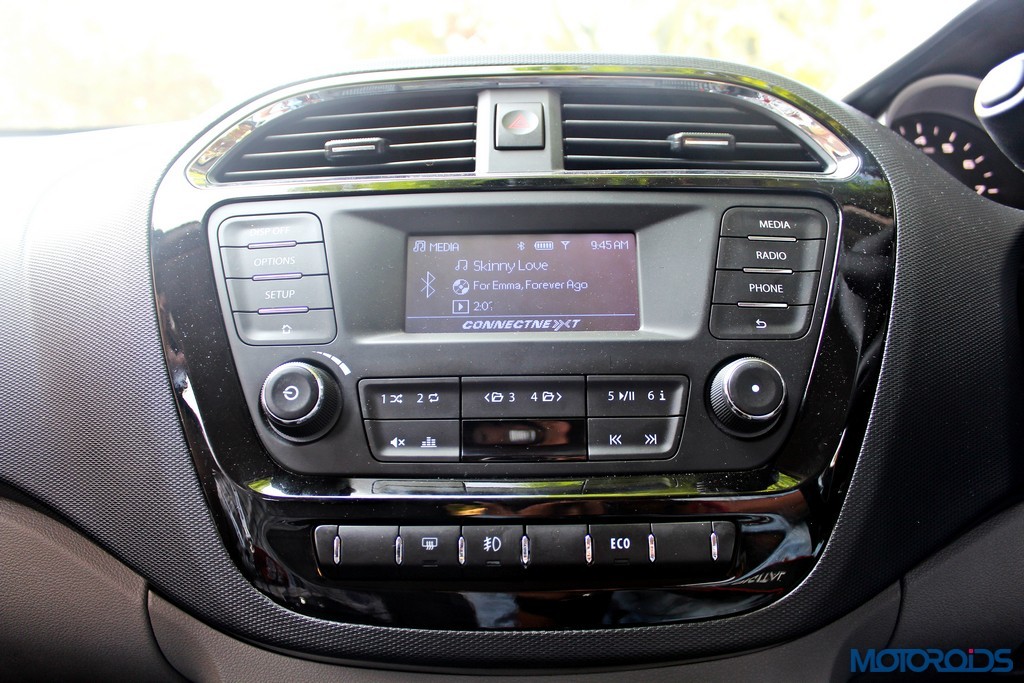 The Harman infotainment system is feature rich and delivers the best sound in class. It is also compatible with a whole variety of input devices. 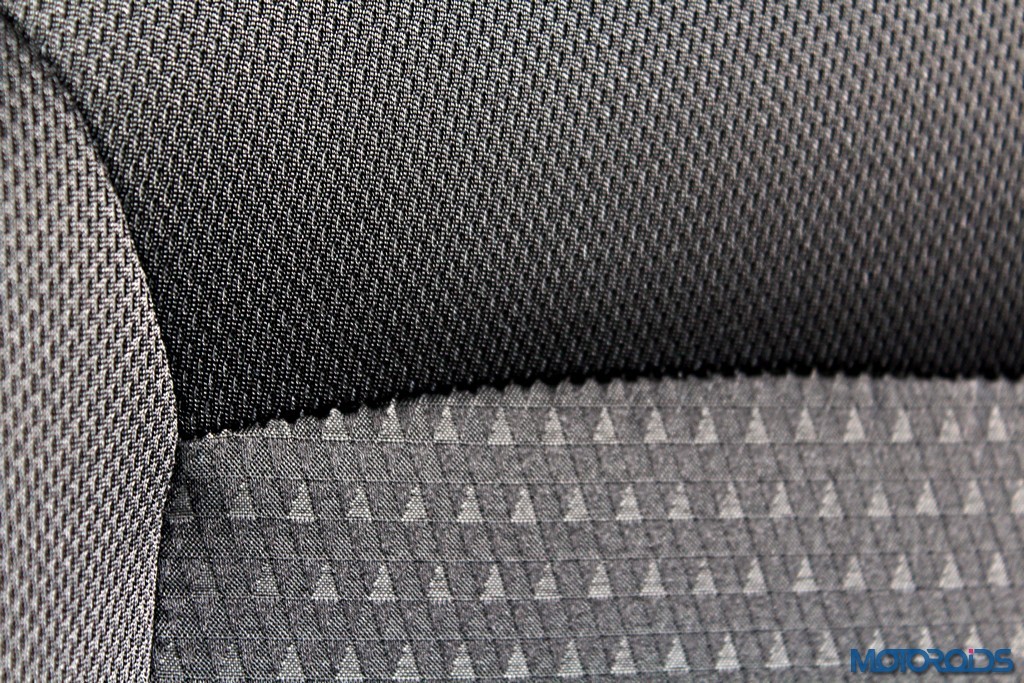 Seats are upholstered in a nice fabric which breathes and keeps your bottom and back sweat free even after hours of driving.

The interior gets quality materials everywhere. It’s the most upmarket cabin for a car in this price segment.

We’ve had a dream run with this machine thus far, and we look forward to tens of thousands of kilometres with this practical, efficient and reasonably punchy machine. So far, so good. Watch this space for tracking the Tiago’s journey with us. Here’s an image gallery.