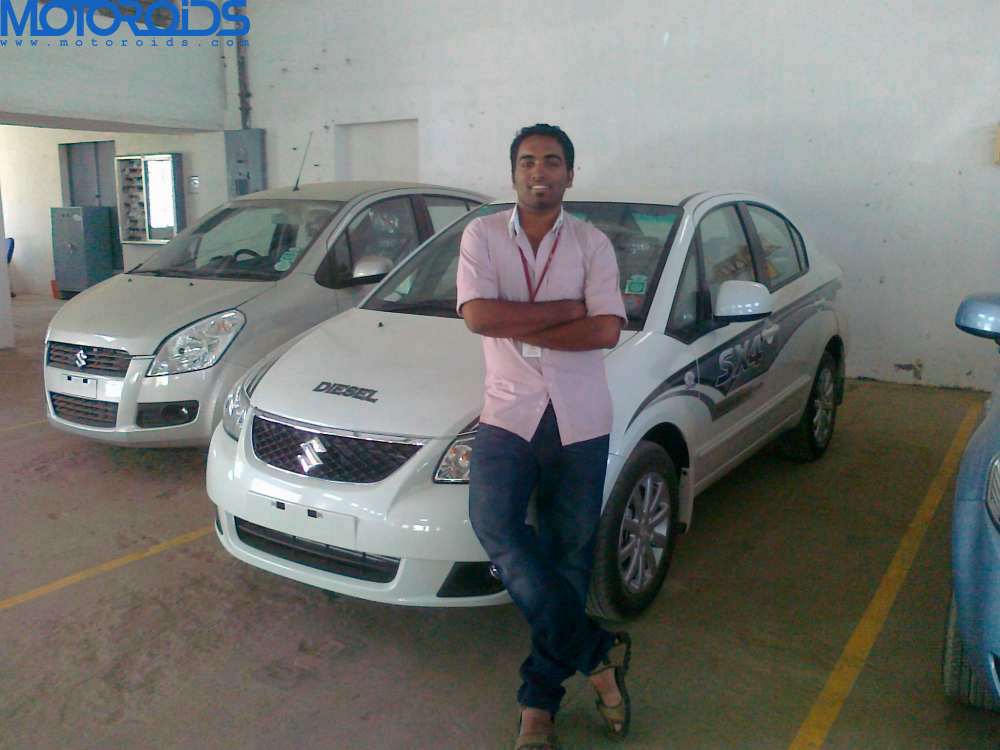 Diesel lovers here it comes, the long awaited diesel SX4 with a variable geometry turbo. The SX4 diesel comes with the same Fiat 1.3L, 4 cylinder diesel engine which develops maximum power of 90 Bhp, and powers the Fiat Linea and the Indigo Manza. With maximum torque of 207 Nm in Suzuki’s DDiS form seems like the VG turbocharger has actually made a difference. What you feel behind the wheel is pure torque right from the first time you put your foot down on the pedal.
This thing really leaps ahead like a drag racer, and you will really miss the turbo lag of the Swift 1.3 DDiS. Crank the car up, and you will instantly realize that the engine is slightly noisier than the Swift hatch. But those diesel lovers aren’t really going to care.

I was driving the top of the line ZDi version with 15 inch alloys, climate control and all those safety features on Suzuki’s list. The car accelerates comfortably even at low rpms. The engine is heavier and the McPherson struts on the diesel SX4 are slightly tweaked when compared with the ones on the petrol version to take care of the extra girth.
I didn’t manage to take the car on the highway, but the car impressed me on the city roads. I was lucky to get some traffic free sections and managed to rev hard. You can feel the gush of the torque from this acclaimed engine almost instantly.  The engine is responsive, with load of torque on tap. Even with 14 horses less than its petrol counterpart, the diesel SX4 feels much more powerful and driveable. The SX4 is more enjoyable behind the wheel than its petrol counterpart any given day.

Engine apart, the only visual differences you will find on this car are under the skin and some badges. Only the SX4 ZDI variant comes with climate control and ABS. On VDI you don’t get these features.

Automatic air-conditioning with attractive matt-silver dials and steering-wheel-mounted controls for the music system are also part of standard fitment in the ZDi variant. The pair of brushed chrome strips that straddle the central console look good and the chromed air con controls also look and work well.
It is obvious there are a lot of bits carried over from the Swift on the insides as well. Stuff like the steering wheel, power window buttons, air con vents, some switchgear and the gear stick are shared among the hatch and the sedan. The electric mirror adjuster knob feels particularly tacky. A nice touch, however, are the height adjustable front seats and Steering tilt. Finding the right driving position is easy.

With its high ground clearance, its rather easy to get in the car as well, and you need not crawl into the seats. In terms of equipment, the New Maruti SX4 is all that what u find in its pertol cousin, just that console get some extra indicators and lamps of diesel engine sensor like water in fuel, service check etc.

To an untrained eye, it would be almost impossible to tell the diesel SX4 from its petrol cousin. The DDiS and LDi / VDi and ZDi badges are the only giveaways. Although for someone who understands automobiles technically, the intercooler helps distinguish the diesel from the petrol.

All in all, the diesel SX4 is definitely a better car to drive and more fuel efficient than its petrol brethren. If only Maruti prices it well, it will plug a huge gap which has been there in the Indian auto market for long. It will offer a reasonably big and premium diesel sedan at an affordable price. We are sure the SX4 will do well in its new avatar.