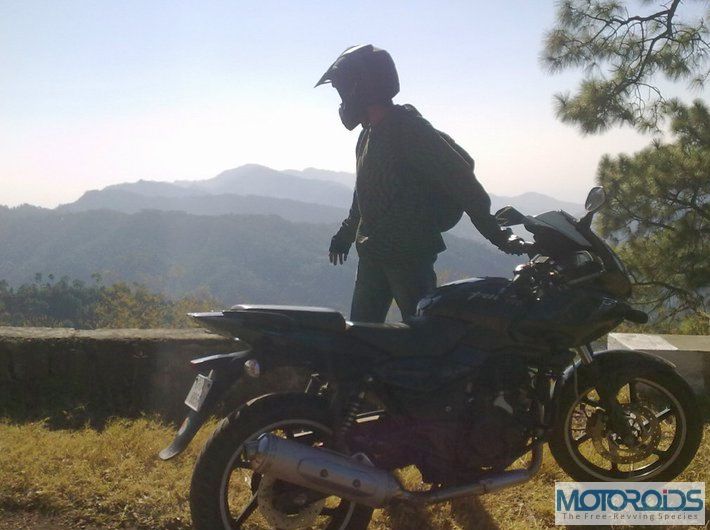 I was in junior school when the Pulsar twins came to the market. I remember grown-ups talking about stuff like ’electric starter’, ‘disc brake’ and ‘the colossal power’ that the 150cc engine had! Soon, every kind of biker from plain hooligan to a touring guy was seen using a Pulsar and quite in love with the machine. Then in 2006, I entered the world of two wheels on a Pulsar 180 UG3. The raw power combined with the rorty exhaust note was perfect recipe for having teenage fun. Come 2009, and there I was, proudly astride a Midnight Black Pulsar 220 DSTi F. With some 21 bhp at my disposal and a quarter fairing upfront, smoking poseurs and catching attention of the fairer sex was so easy, it wasn’t as much fun as it used to be.

Seems like the 220’s days of glory are finally going to get over, what with the new 200NS emerging on the horizon. The new Pulsar displaces about 200cc, 20cc less than the 220, and yet, at 23.5PS, produces about 2.5 PS more. Combine this with a gas charged monoshock along with spanking new tech and styling that can be seen on a naked litre class bike and you could probably be looking at the 220 quietly sobbing in a corner. The biggest threat to the ‘fastest Indian’ is Rajiv Bajaj’s announcement that the 200 NS will be priced below Rs. 1 lakh.

Recently, I had a go at the 200NS at Bajaj’s Chakan track. Being a proud owner of the P220 for some time now and willing to switch over to something new, I have been wondering for a while whether the 200NS makes for a worthy upgrade. Is it really worth spending Yamaha R15 and Hero ZMR kind of money on it? Read on.

Outright performance: So what if this thing has 3 spark plugs? My 220 has 20cc more… 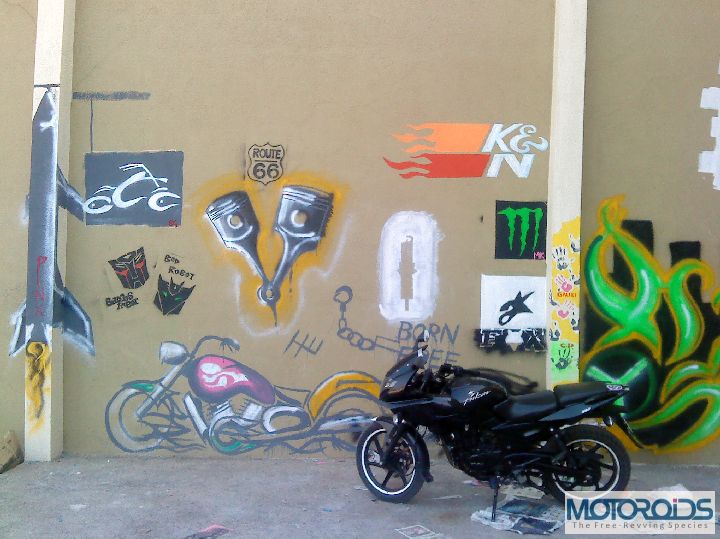 This was exactly what I had in mind before slotting the 200NS into gear and gunning the throttle. Now, the Pulsars have always been criticized for being low on refinement. Frankly, I am quite used to the pillion on my 220 complaining of the vibrating foot pegs. Heck! Even I am tired of the vibrations on rider’s foot pegs. The 200, however, loves revving all the way to a tacho-indicated 10000 RPM, beyond which the bike’s complaining becomes vocal. The 220cc bike has upward of 21PS to play with. Torque produced is respectable at about 19 Nm but the delivery is not as linear as the earlier fuel injected version. Enough to overtake fast moving traffic, however, without having to plan downshifts in advance. The gear shift quality again is ahead of initial variants of Pulsar with no false neutrals but still is a notch below the smoothness offered by some other Japanese products.

Now, the moment you thumb start the 200 NS, one of the first things to catch your attention is the refinement that this bike has on offer. Make no mistake, this bike is no Honda Unicorn but suddenly, we are looking at a bike that can almost rub shoulders with the Yamahas of this world. The Pulsars have always been letting you rev to the moon to extract the last drop of juice. The 200 NS is all this and more. For a guy like me, who treats his bike like his girl, while the 220 felt like talking about moral incorrectness when merrily making out with her, the 200 NS feels overjoyed during this moment of intimacy and goes ahead and teaches you a trick or two while at it. Pulsar 200NS has about 2.5 PS more than the 220 but is lower in torque stakes by about 1 Nm. However, it never felt anaemic and the tacho needle was seen dancing joyously in every gear. Very much like the fuel injected 220, the NS has a linear power delivery and the bike felt it was on steroids above 4500 RPM, with reasonable tractability at lower rpms as well. The new ‘girl on the block’ starts hitting climax somewhere north of 8000 RPM and lets you keep accelerating for about another 2000 revs before screaming to ask you to take it easy. Bajaj claims an almost 10 second run to 100 kmph and the upcoming flagship surely feels that it is capable of being as quick. While, the numbers might not make the 200NS appear much quicker than the 220, it is the way the bike feels under hard acceleration that sets it apart.

The KTM influence can be seen here and round 1 goes to the Pulsar 200 NS. 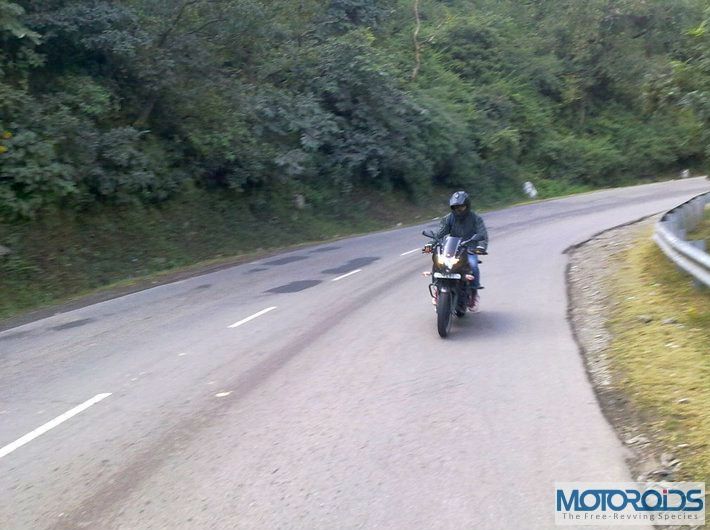 No matter how much I love my 220 and no matter how capable a 220 rider might be, I acknowledge the fact that the handling capabilities of Pulsar 220 DTSi (and all last gen Pulsars for that matter) leave a lot to be desired. The bike at about 152 Kgs, is rather heavy and coupled with the dated chassis, I have never found the 220 to be a tool to go apex hunting. The gas charged rear shocks, however, are adjustable for dampening and that surely helps when you wish to go for a stiffer set up as a trade in for ride quality. The MRF Zappers on 17 inch 5 spoke wheels surely helped when dealing with twisties on Himachal roads, back in the time when I was in Chandigarh.

I was in quite a dilemma prior to swinging a leg over the 200 NS. While the bike tester in me was hoping for a Yamaha R15 like handling package, the 220 owner in me wanted the new Pulsar to be as raw and wild as its big, bad daddy.

Well, I am not ashamed to report that the journo in me won over the owner of an old bike. The only way I used to battle in corners with my friends on R15s was to put to use whatever little cornering skills I have and then, use the bike’s brute force to power through the bend. As reported earlier, the 200 NS is fairly more powerful than the current Pulsar flagship. Combining the fact with the 200NS’ handling package surely swings the balance against my 220. The 200 NS is almost in R15 league during apex hunting. This is surely saying a lot as it also means that the bike handles better than the Hero ZMR and the RTR 180, which, are quite well sorted in this department.

While the NS will easily corner, you will surely need to know the machine’s limit in the corners. That said, this bike surely makes you look like quite a pro on the track. 200NS’ tasty looking 17 inch 10 spoke rims come shod with Eurogrip 100/80 (F) and 130/70 (R) tires and while the front does a nice job with making you communicate with the tarmac, it is the rear that gives up on you a bit before it should. While the rubber never feels like it is lacking on grip, it prevents you from exploring your cornering capabilities. So, should the elder sibling be having a wicked and knowing grin here? In a word- No. This little glitch here can easily be cured by summoning in the Sport Demons.

Round 2 too goes to the new baby.

Features and equipment: Does not it all ultimately boils down to the goodies? 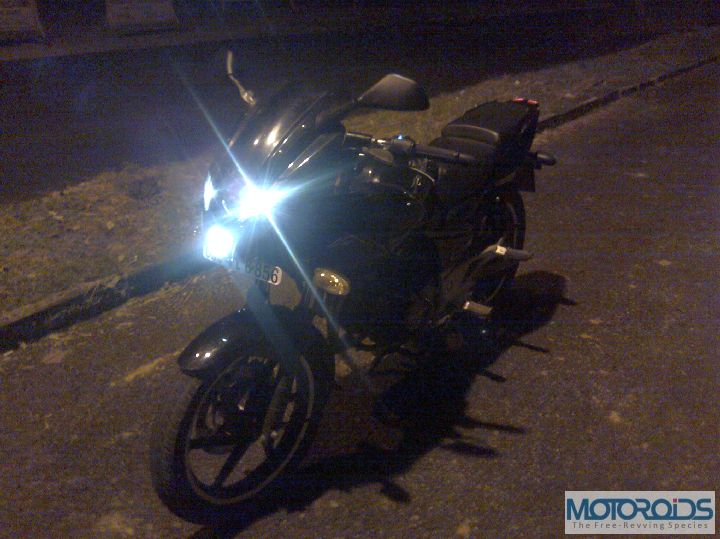 Most of the times, my answer would be in affirmative. But this time around, I think I will eat my own words. When the 220 came to us, we saw the bike sporting split seats, digi speedo console, clip on styled handlebars and front and rear disc brakes. The 200 NS surely has all of this but what it does not have are the excellent headlamps. While the 200 NS surely has enough technology and spunk, 220’s 55W projectors are sorely missed. The halogen upfront simply means I will be looking at upgrading the electrical system to put a powerful HID on duty.

The lack of just one feature will make me give a point to my beloved 220.

Build quality, fit & finish: How much better can the build quality be if it is coming from Bajaj?

Bajaj bikes have always been criticized for having a build quality that is not on par with its Japanese contemporaries and the 220 is no different. While no troubles of parts falling off or cracked plastics were faced by me, a couple of bumps have always been enough to set in a few vibrations in the panels on the 220.

Now, to answer the above question precisely and concisely, I will say- much better! Yes, the 200 NS sports quality switchgear that can do duty on any International bike (including the japs on sale in India). Not just that, the consistent panel gaps, the quality of plastics and everything else seems top notch.

Here goes another point to the 200NS.

Comfort and convenience: Okay, but what about the Ergonomics?

This is an interesting bit. One of the reasons for me opting for the 220 over the R15 and ZMR was the ‘neither too sporty nor too commuter-ish riding position the bike offers. Similar is the case with the 200 NS. Like the old flagship, the 200 NS comes with ‘clip-on’ handlebars that are positioned quite well for day-to-day use. The bad bit here is that the pillion seat is certainly not the most comfortable around. This is surely not a deal breaker unless your friends and WAGs ride regularly with you (and are the dominating kind).

The 200 NS and the 220 are equally good or bad in this area and that makes me give no points to any of the bikes here.

A stalemate between the two? Well, almost.

Style quotient: 200NS may be new but the 220 has the quintessential fairing… 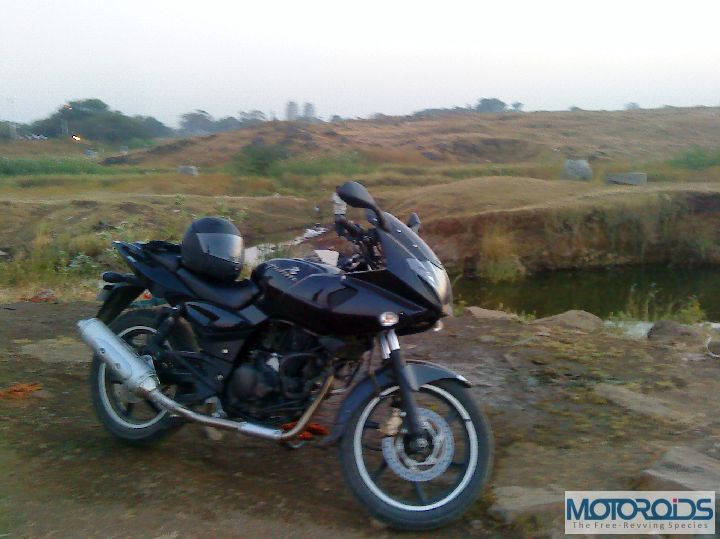 Pulsars have always been aggressive looking with that muscular fuel tank and the 220 took the game further as it became the 2nd bike of the segment to sport a quarter fairing after the ZMA. The trafficators sticking out of the fairing lent the bike a sleek and a sharp look.

While having a fairing may be quite essential for many premium bike owners in India, it is not really essential for looking good. When viewed in front 3/4 profile, 200NS will remind you of Honda CB1000R. Now there are two ways to look at it. You can either criticize Bajaj for getting overboard with inspiration, or you could just be happy that your bike somewhat looks like one of the best styled streetfighers out there.

As a standalone product, the 200NS looks appealing and the styling does justice to the Naked Street (NS) decals. Coming to the rear, the NS has twin LED stripes that pay homage to the Pulsars of the yore. The new Pulsar also has chunkier split grab handles that remind of those seen on Apache RTRs.

Overall, 200 NS looks fantastic and very unlike the dime a dozen 220s on the road.

Okay, there is no hiding from the fact that the 200NS seems to have stolen the wind from the sails of my 220. I can surely spend some of my savings on getting the HID and Pirellis. Now, I have enough fond and not so fond memories that involve my bike. What with riding along a pretty pillion and also having crashed at v-max and lived to tell the tale? The 220 is going to stay but would it not be utter awesomeness to have both the generations of Pulsar flagships in the garage? Time to ask for a salary hike then? Are you listening Mr. Ed?