Home BMW On the limit with all the BMW M cars in Poland: A drive experience 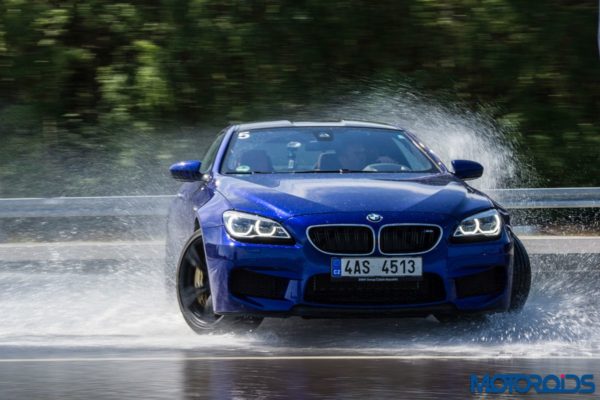 The test venue was an old military airport turned into proving ground by Polish legend, Sobiesław Zasada. Have you ever heard the name? Well, probably not. Zasada was racing Porsche 911 in the ‘60s – a period when his country was still a socialist protectorate of the Soviet Union. And he won three European championships in the process! This guy became a serious industrialist after the Berlin wall was broken. He manufactured Mercedes vans in Poland and for testing them he created a proving ground on the outskirts of Poznan. 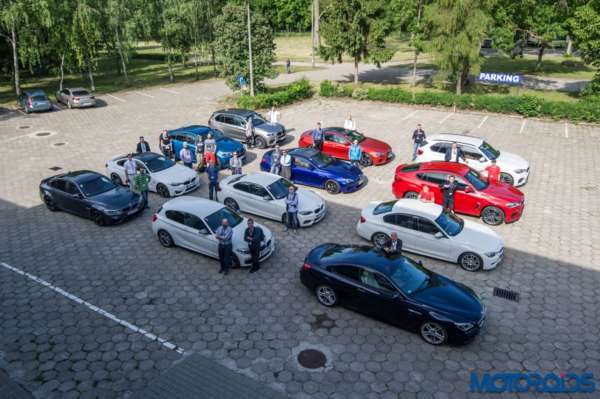 The programme of this very special day was organised in perfection by Nikos Tagoulis, ex-rally driver, motorsport aficionado and BMW PR for SE Europe. Tagoulis sure does know what makes a motoring journalist happy and he pulled out a formidable programme for this event. Every motoring journalist present at the event could drive about a dozen M models in different scenarios, pushing the vehicles to the extreme. Participants were divided in teams of four. The event was filled with some juicy activities like drifting on wet steering pad, sudden oversteering control, fast lap on the airport track, 0-250 km/h acceleration and even driving on public roads. 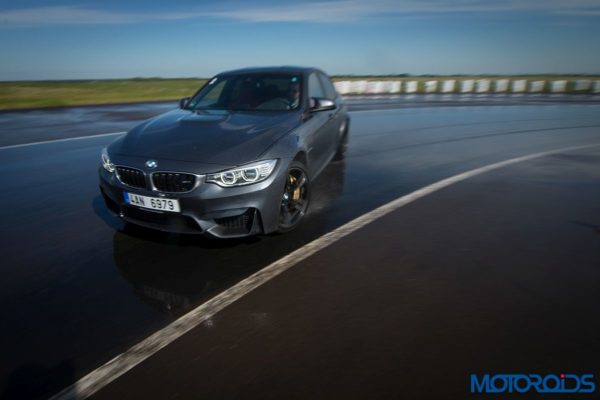 The philosophy of M cars hasn’t changed since the introduction of the first, 4-cylinder M3 in 1985. M Cars are finely tuned BMWs for track day use, keeping a discreet – even if bewildering – appearance. Something like Dr. Jekyll and Mr. Hyde. The recipe is clever and decades proof, however, the development of such models still remains a challenge for the engineers at Munich. The final result must be hot enough without losing a fraction of the exemplary BMW product quality. Every M car must be deeply tuned but without the feeling of an aftermarket modification. Engines used by M models are powerful, at supercar levels. Earlier units were traditionally naturally aspirated but today’s M range uses avant-garde biturbo inline six and V8 units.

Well, let me start from verdict: The latest generation M3/M4 is not softened in comparison to the former eight-cylinder M3. It is downsized with two cylinders less and turbo aspirated but it is more powerful, incomparably more “torquey”, lighter, more eco-friendly and – this is important – more edged than ever before. Engine sound is a pure metal roar that changes tune according to the throttle position and the selected driving mode (comfort, sport, sport+). Throttle response is excellent – turbo lag is almost zero, torque is mind blowing and the inline six revs where few aspirated engines can – up to 7600 rpm! Rock hard Chassis, aluminium suspension, four piston caliper discs at the front and wise use of carbon fibre at the roof, transmission axle and at the bridging bar in the engine compartment, give a racing machine that can be used on a daily basis with minimal sacrifice in comfort and luxury. 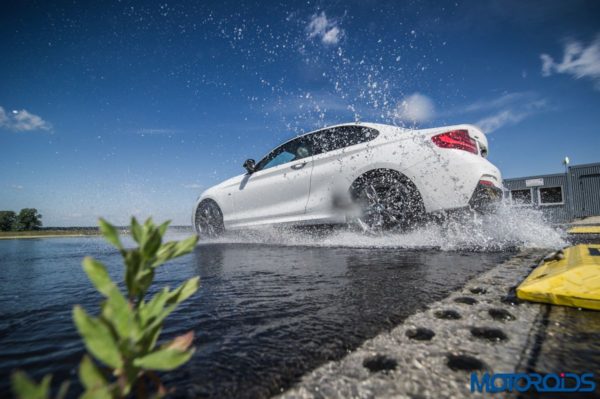 On the limit, it is neutral to oversteering, depending on what you ask from it. It has a razor sharp feeling in slalom and lane change and is a keen drifter either with DSC off or in the MDM (M Dynamic Mode) that interferes only in case you seem to lose control. The big question is how far could BMW go to improve this car. Munich should probably get even more open minded in the development of future M models and possibly equip them with hybrid systems. We’ll see…

This is the most powerful and fastest BMW ever built. You might expect a soft, business class M destined to a mature clientele but the M6 proves to be a hardcore coupè, a slightly bigger but much more powerful M4 with a perfect balance! As a result the top of the range M is unbeatable on the autobahn and on a racetrack as well. 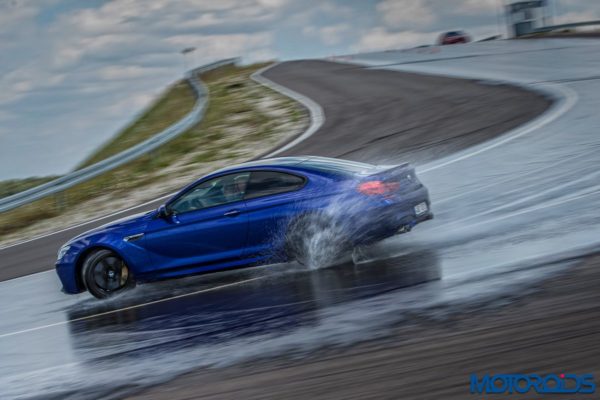 On the limit it feels smaller than it is, very stiff but comfortable, with a superb feeling on the steering wheel (purely hydraulic Servotronic) and a V8 that could suit any exotic supercar, thanks to formidable torque from very low and explosive power characteristics up to 7000 rpm. And what a sound! On the short straight line we easily read 260 km/h on the head-up display and it kept accelerating hard. BMW can chip your M6 to raise the speed limiter from 250 to 305 km/h. From July, the M6 will be available in a retuned Competition version with 600 PS and 700 Nm. Danke München!

OK, the BMW M3/M4 provide you the pleasure you dream. M6 is surprisingly hardcore for its clientele but the real surprise are the twin Sports Activity Vehicles (SAV) expression of the M brand: the X5 M and X6 M. These twin SAVs are real M cars despite their exorbitant weight and size. After a fast lap in the airport at the wheel of the X6 M, where we also drove the M4 and M6, I couldn’t stand but shout to our German hosts: “this is really incredible gentlemen!” 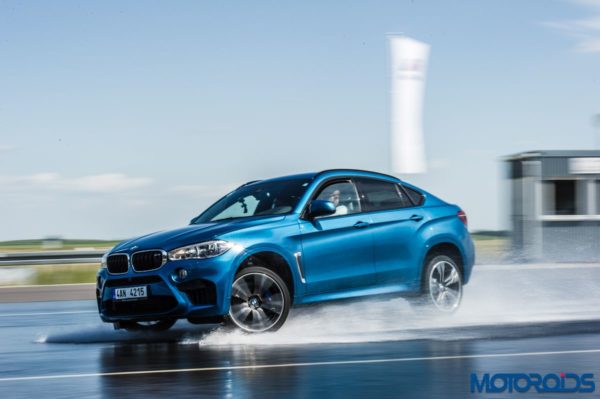 I could never imagine that a tall, 2.5 ton mass could be driven so fast and so well. I have driven the top Cayenne Turbo S and I can tell that these twin BMW SAVs are a serious bet against the Porsche. Rear pneumatic suspension is height adjustable but keeps a racing feeling on the limit. The grip is extremely high but still the power of the V8 is enough to make the rear wheels spin and slide on the very high limit. But only if you ask for it. On any other occasion the X5 M and the X6 M can go fast as few modern supercars but with the less possible heartbeat for their drivers. A perfect blend of speed, power and self control that might create over confidence and, possibly unsocial behaviour to the rich but uneducated driver.

We drove the compact car only for 5 minutes on the wet steering pad with manual gearbox and it proved a genuine drifting machine with great control. This despite the rear differential not being slip limited. The three-litre biturbo engine has a sweet response from low rpm, delivering plenty of torque throughout the range and eliminating irrelevant turbo lag. A beautiful introduction to the real M models! 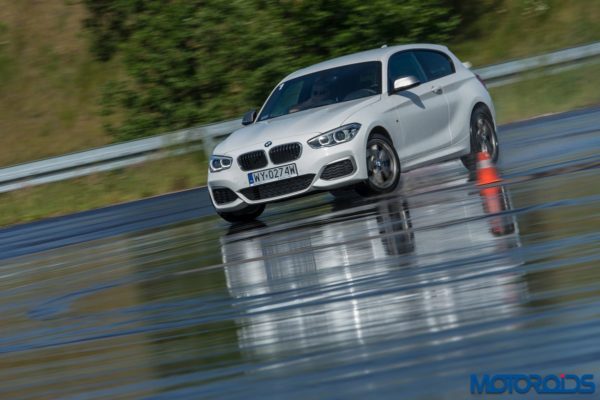 We tested the compact AWD M235i in a mixed wet/dry circuit, where we were challenged to make an elk test at 60 km/h on almost zero friction, control the sidekick of the rear by a metal shredder and return from a fast service road. On the wet the car is 100% predictable and sweetly controllable thanks to the swift and informative steering wheel. The setup is well balanced with sporty suspension and perfect power to weight ratio. The M235i xDrive looks middling only if you drive it right after the M4 on the very same track. The track test was scheduled to make us understand the difference between a hardcore M and a softer one. 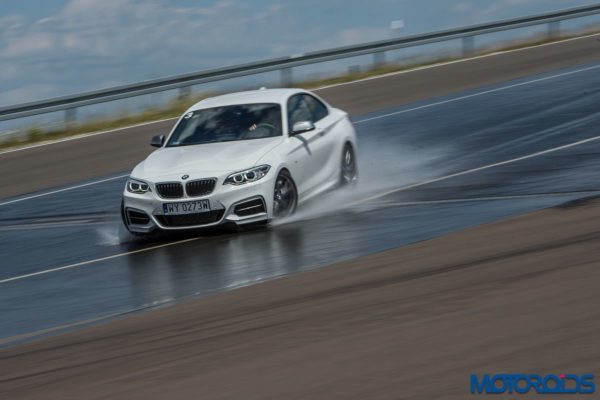