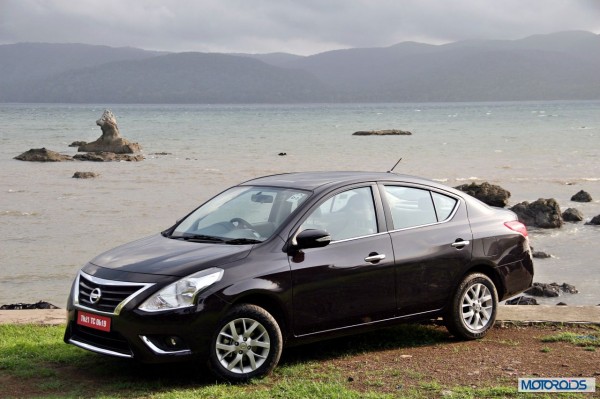 The Nissan Sunny, upon its launch in India, grabbed attention by virtue of its generous back seat legroom and a good choice of diesel and petrol engines. Nissan later introduced the efficient Xtronic CVT on the petrol powered variant to offer a practical alternative to those who preferred the convenience of an automatic transmission. For the initial part of its lifecycle, the globally acclaimed model sold pretty well too. Blame it, however, on the relative newness of Nissan as an automobile brand in India, the lack of a robust sales and service network, or inefficiency of an external marketing partner in Hover (which Nissan have duly distanced themselves from) the popularity and sales of the very promising Sunny didn’t quite live up to its initial promise. 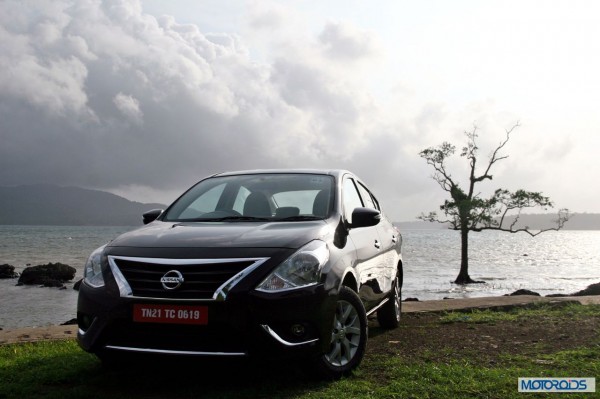 Being a globally renowned, revered and respected brand, however, Nissan has pulled up its socks and has now presented the mid-term facelift of the Sunny with enhanced exterior, more features and hopefully more value (price announcement due) to the customer. In its 2014 variant, the Sunny has undergone many changes, both cosmetic and feature related. While the brand new grille, a liberal splattering of chrome, new headlamps and snazzy new wheels are evident changes, there are some finer details too which may go unnoticed. So let’s have a detailed look at the shiny new Sunny in this exhaustive review 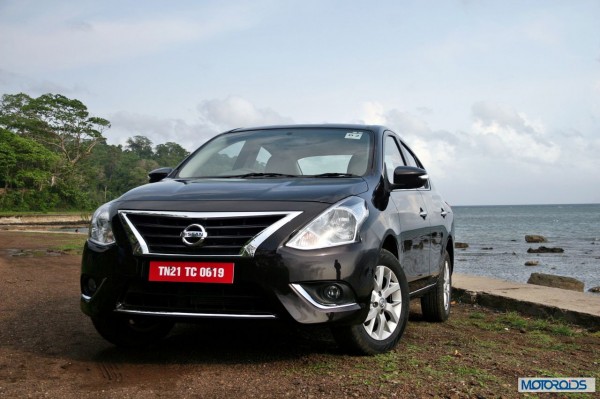 The most apparent change made to the Sunny’s fascia is the introduction of the new boomerang shaped headlamps, conforming to Nissan’s new global design philosophy. You’ll see a similar treatment meted out to the headlamps of all Nissan vehicles of this generation. As mentioned to us by Nissan global design head Shiro Nakamura in an exclusive interview during the 2014 Auto Expo, the shape of the new headlamps is an effort by the design guys at Nissan to lend all Nissan vehicles an identifiable family look. Without any doubt, the new headlamps look sportier and bestow the Sunny’s face with a sharper look as compared to its predecessor.

Indians have a thing for big radiator grilles and chrome, and keeping their taste in mind, Nissan have lent the new Sunny a big, wide grille lined generously with chrome. The bumper is new, too, with chrome lined lower lip on the central air dam. The housings for the fog lamp units, too, have been given some chrome treatment at the lower portion. 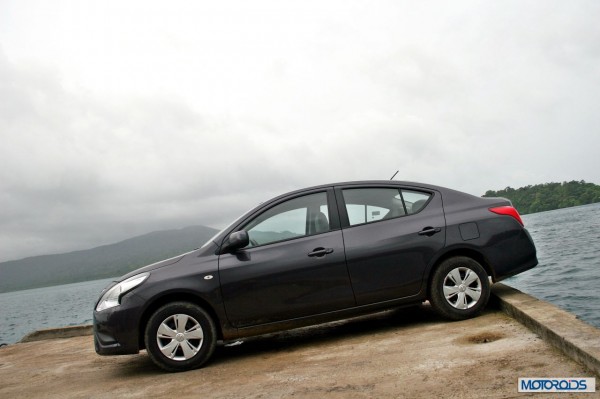 Moving on to the profile, the 12 spoke wheels are brand new; featuring what Nissan prefers calling ‘Y shaped design’. The ORVM now features integrated turn signals and two tone treatment with a combination of body color and black.

The new Sunny continues to showcase its new embellishments at the rear as well. Something that would miss most people’s eyes is the new design of the antenna which is now shorter. More apparent changes include a new chrome garnish over the license plant and a brand new rear bumper. The rear bumper, apart from featuring a new, more aggressive wing like shape, also has a contrasting and slightly flared black insert for a sportier look. 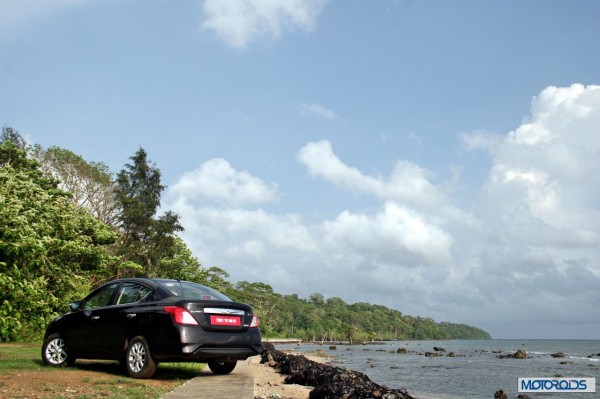 The Sunny, with its long wheelbase and enormous legroom at the back has always looked slightly elongated in profile. While the new changes cannot entirely correct the slightly imperfect proportions, they do work tremendously towards offering more zing and appeal to key exterior areas of the car. It looks more premium than the outgoing model, and should appeal more to the prospective buyers. 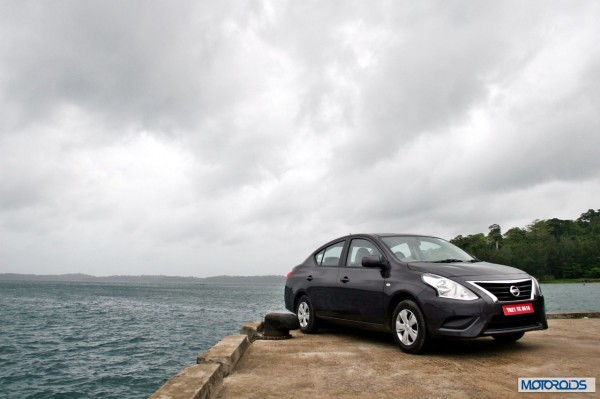 One little thing that you have to keep in mind, though, is that the chrome draped bumper, fog lamp housings and rear garnish is available only with the higher spec variants, with body color replacing the chrome treatment on lower spec variants.

Next page for cabin and features>>> 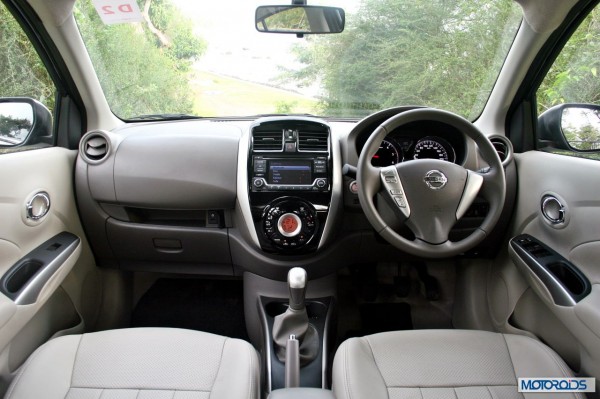 The Sunny has earned critical acclaim for its liberal cabin space, and it manages to keep its key virtue in-tact in the new version. Knee room is astounding at 636mm and there is nothing to complain about the head and shoulder room either.

We have written in detail about the space and features available in the Nissan Sunny in our earlier review, and we will discuss only the new features and changes made to the cabin in this piece. You may like to read our detailed previous review of the car by clicking here 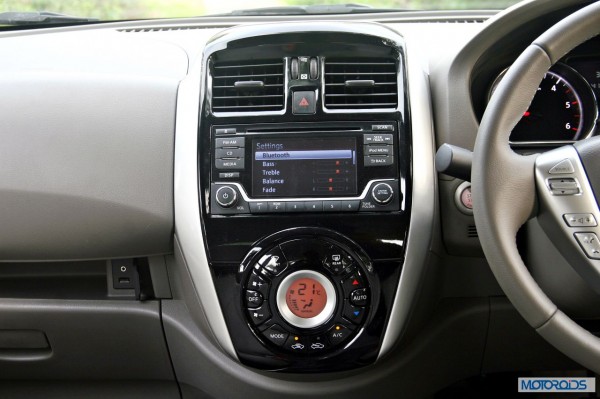 The biggest change made to the cabin of the Sunny is the new design of the center console, and the introduction of a brand new steering wheel. The center console, which was finished in grey on the previous version, is now predominantly black with the circular console for A/C control finished in glossy piano black. The functionality of the A/C control unit remains the same though.

Above the cluster, the audio unit is brand new, and now features a nice looking and well finished colored screen displaying all the menus to browse through for controlling audio related functions. The color screen also doubles up as a rear view camera to assist in parking. The Audio unit is CD/Aux-in/USB and Bluetooth enabled. The fit-finish of the newly incorporated unit deserves a word of appreciation. It looks quite up-market with its touches of chrome and feels nice to operate with soft to touch plastics and smooth movement of knobs. 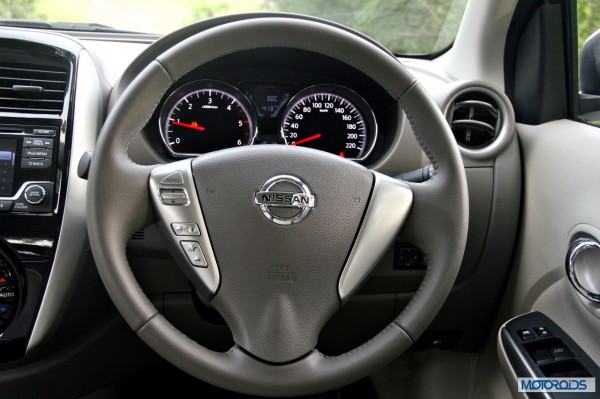 The three spoke steering wheel, as discussed earlier is a brand new unit, with two vertically tapering, satin silver inserts on either side of the hub. All the controls are located on the left hand side of the steering. At the top you have the source button, followed by the seek toggle which has a beautiful feel to it in operation. This is followed by the volume controls and you have the command / mute buttons at the bottom. The instrument console looks nice with its black dial and white markings in a racy font. The MID display is very legible and dishes out useful info such as distance to dry and average fuel consumption. Other small changes inside the cabin include introduction of individual reading lights for the rear passengers. 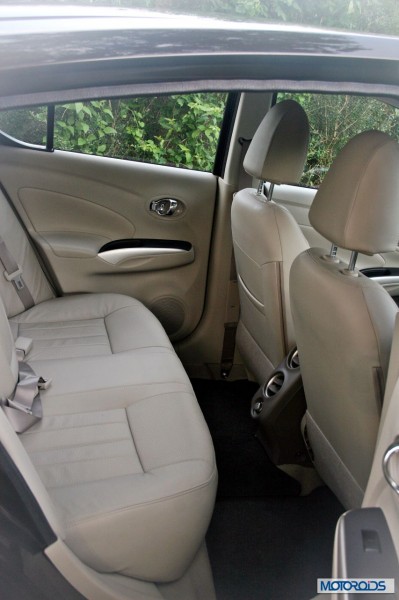 As always, the Sunny’s cabin remains a spacious, comfortable and functional place to be, with some new features adding further to the value perception. The top end variant with its new multifunction steering wheel and central color screen looks more feature rich and up-market, and should be able to impress potential customers more convincingly. 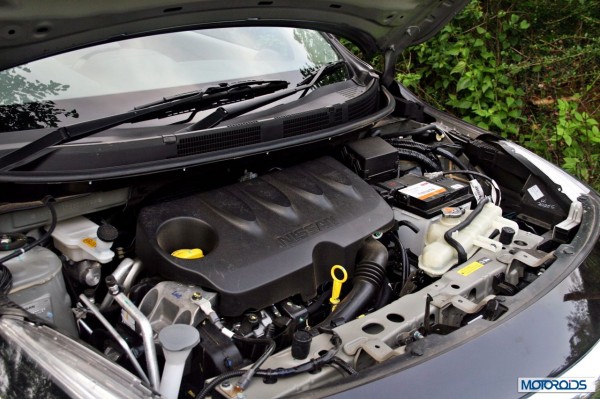 Nissan have not tinkered with the tried and tested engines of the Sunny, and the model continues to be powered by the HR15 petrol and K9K diesel engines. Of these, the diesel engine has been slightly retuned for better tractability and more fuel efficiency.
The 1.5 liter petrol engine on the Sunny is a torquey, if not crazy revving unit, dishing out peak power output rated at 99PS @ 6000 rpm for the manual transmission variant. The Petrol engine is also available with the XTronic CVT version where its properties have been altered a bit to produce 101PS of peak power at a lower 5600 rpm. Peak torque for both the transmission variants is rated at 134NM @ 4000 rpm. Interestingly, the CVT, even with more power and an automatic transmission coupled with the power plant manages a fuel efficiency of 17.97 kmpl, 1.02 kmpl more than the manual transmission variant. 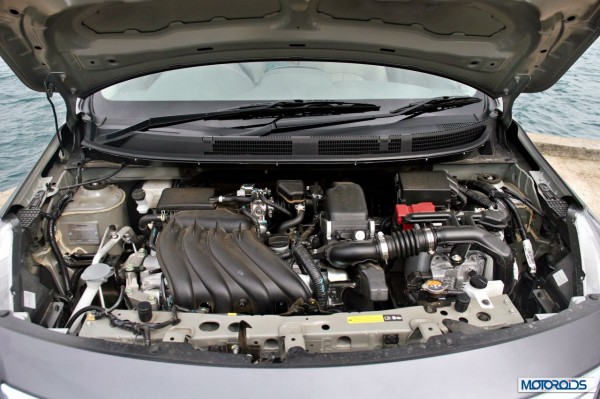 The tried and tested K9K diesel unit is available only with a 5 speed manual transmission and produces 86PS of peak power at 3750rpm. Peak torque figure of 200 Nm at 2000 rpm is impressive, and lends this diesel motor an impressive low and mid-range pull. The diesel powered Sunny feels extremely tractable, and pulls cleanly from low revs in higher gears, even with four aboard as we experienced firsthand during our drive through the narrow, scenic and winding roads of Port Blair. The ARAI fuel efficiency figure for the diesel Sunny stands at 22.71kmpl, which is 1.07 kmpl more than the outgoing version. 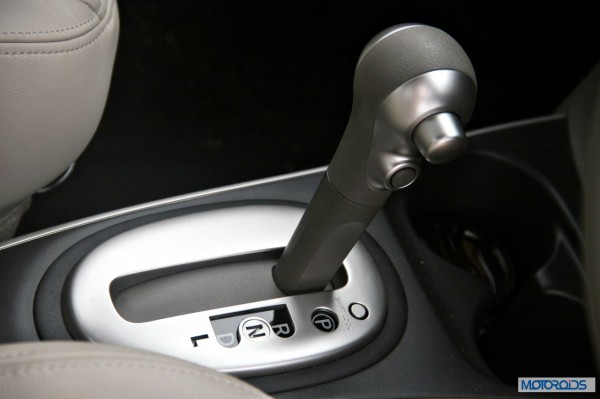 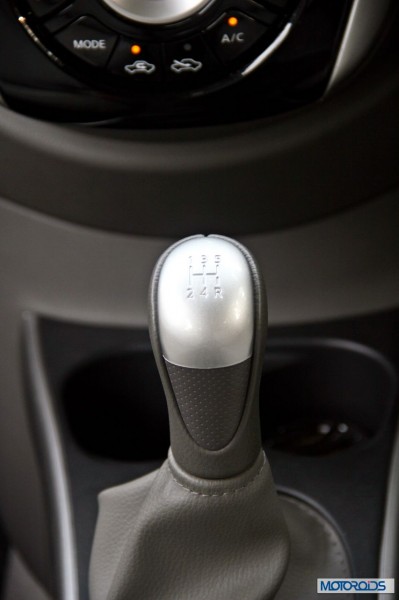 Both the engines are practical and efficient and don’t really have any flaws. The Petrol motor may not like revving to the moon and back, but it’s quite torquey at lower engine speeds, making for a hassle free city drive. The diesel motor too is one of the most refined, linear and tractable units in the segment. Good fuel efficiency delivered by both engines comes as a bonus.

Next page for ride, handling, variants, features and verdict>>> 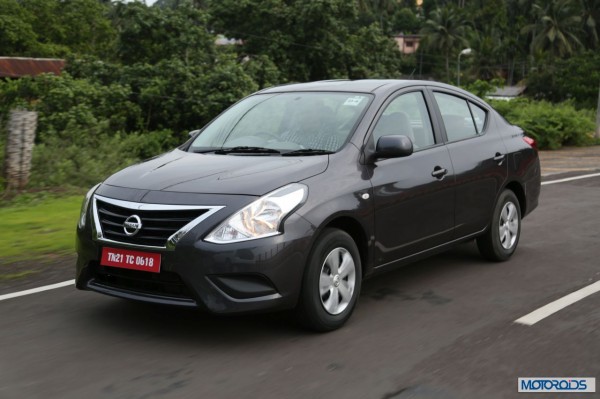 The Sunny has always been more oriented towards ensuring optimum space and comfort for the back seat passengers than delivering the kicks to the man at wheel. It’s got a balanced ride, light steering for easy maneuverability and reasonably sized tyres to offer decent levels of grip. Since the mechanicals of the car have not been touched, the drive and ride feel of the car remains completely unaltered. The Sunny will ferry you around in comfort, absorbing minor bumps without a whimper, and making a complaining noise only when you make it pass over the more vicious undulations. 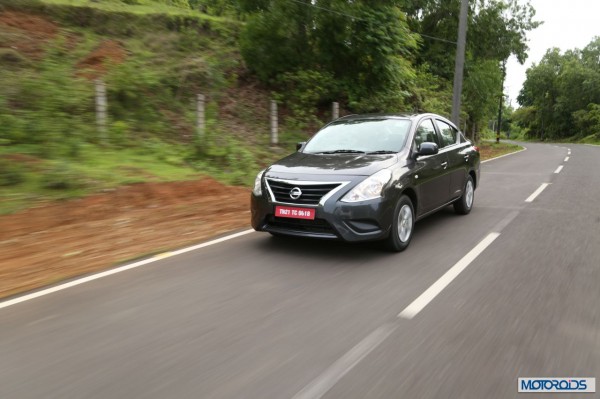 From behind the wheel, the steering feels light, though we found the feedback and weight of the steering on the diesel variant a bit more satisfying from a driver’s perspective as compared to the petrol version. There is a fair bit of body roll exhibited by the car when it’s hurtled around a corner, though it exhibits appreciable poise when driven at moderate speeds. It’s only upon crossing the threshold of practical driving and verging onto lunacy that the tyres start losing their grip and the underpinnings begin crying foul. 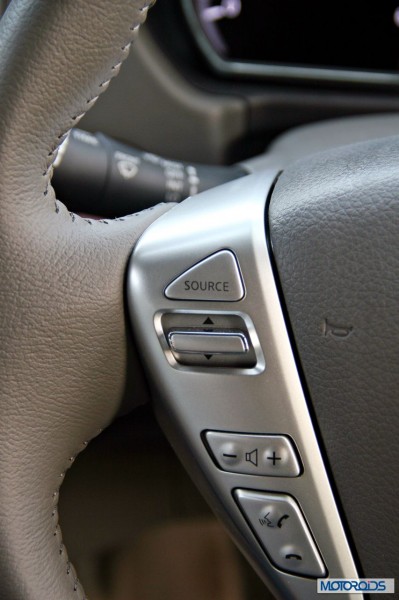 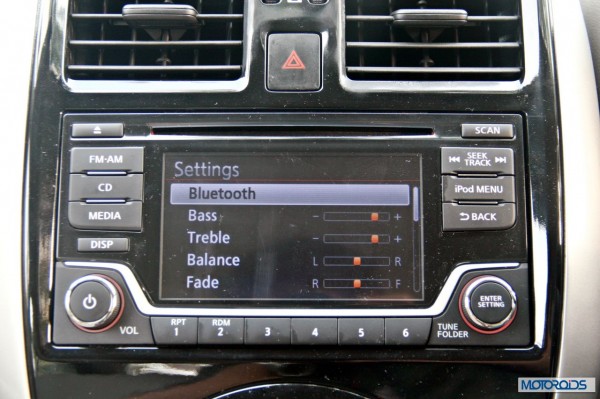 New color screen for the top of the line variant 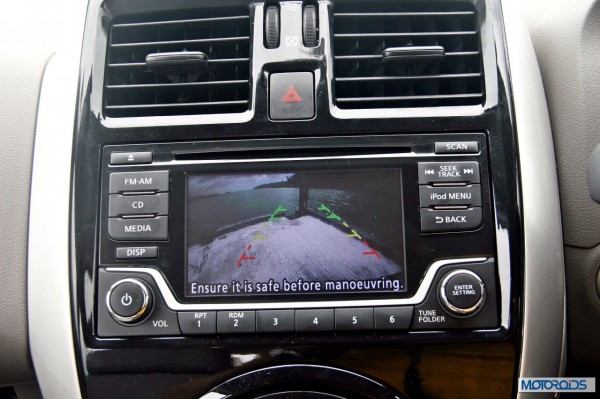 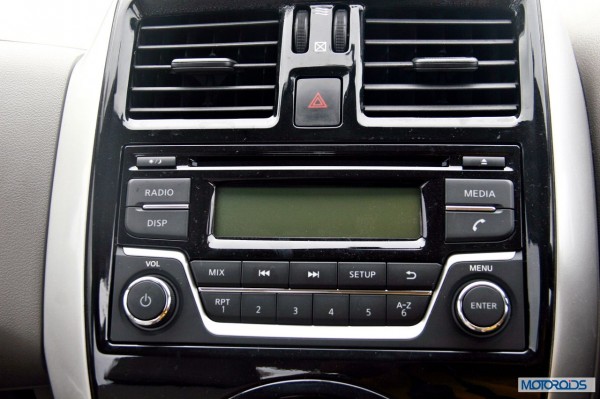 Lower variants get this two din audio without the screen 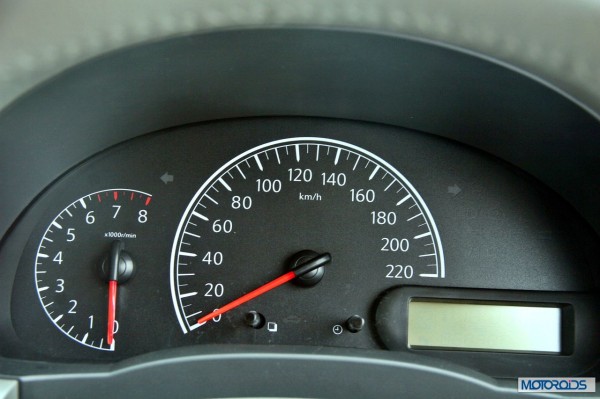 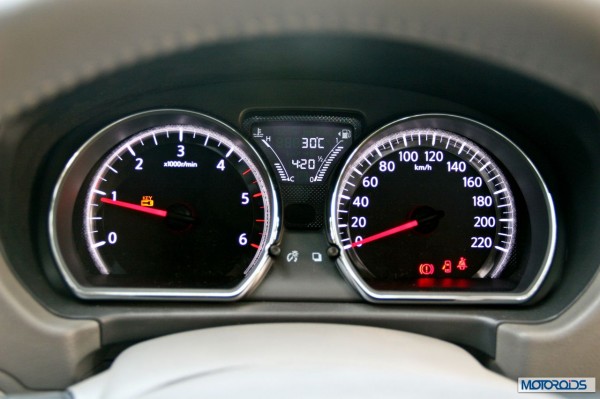 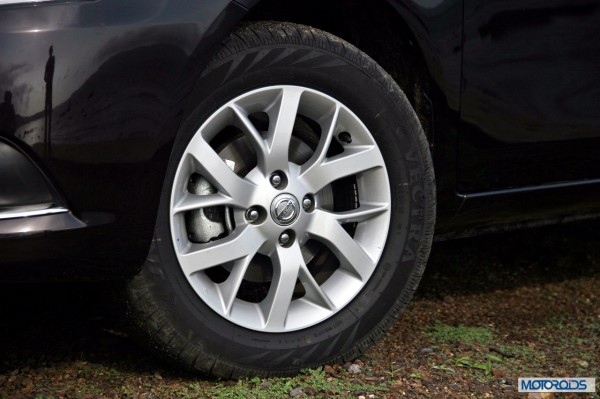 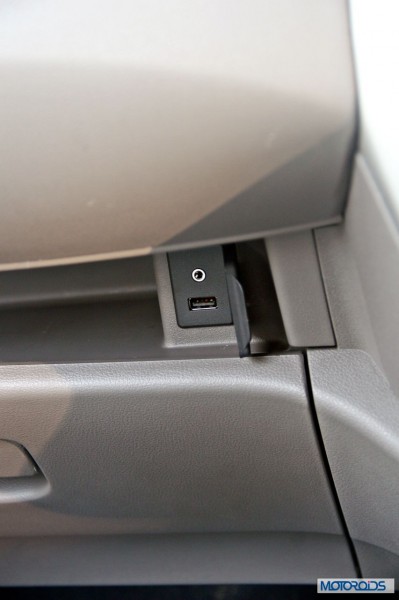 The complete list of variants and their respective features are provided in the chart below. Luxury Pack 1 and 2 add leather upholstery and 2 additional airbags (side, total 4) respectively to the top of the line XV variant. 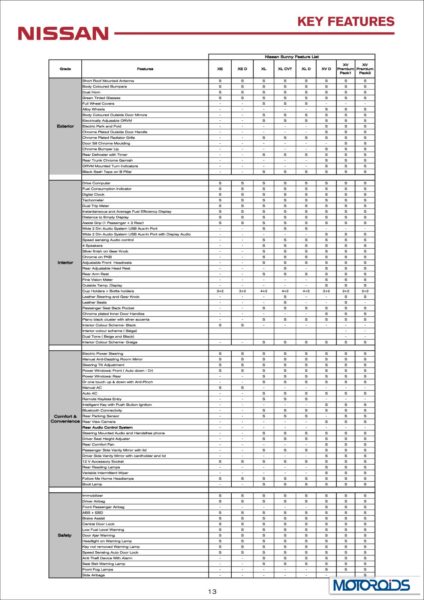 The Sunny has always been appreciated for its practicality, comfort and good price. It’s not earned many brownie points as regards styling, but with the changes made to the exterior, the car looks better, especially at the front, though it still isn’t a head-turner. It’s a decent looking family sedan which should appeal a bit more to the buyers in the C-segment thanks to the bolder exterior styling and some really useful new features.

The Sunny isn’t a particularly exciting car to drive either, but the diesel engine is amazingly linear, smooth and responsive. It also delivers great fuel efficiency, making it one of the most practical diesel engines on sale today. The petrol motor, on the other hand, though not too sporty, is quite torquey and offers great driveability and fuel efficiency. The CVT variant astounds by delivering even more fuel efficiency than the manual version.

The price of the car has not been announced yet, and we will get back to you with our final word on the value proposition offered by the car once the prices are out. In the meantime, do let us know what you think of the new Sunny and what should be the ideal pricing for the base and top end variant of the car respectively.

Next page for tech specs and image gallery>>> 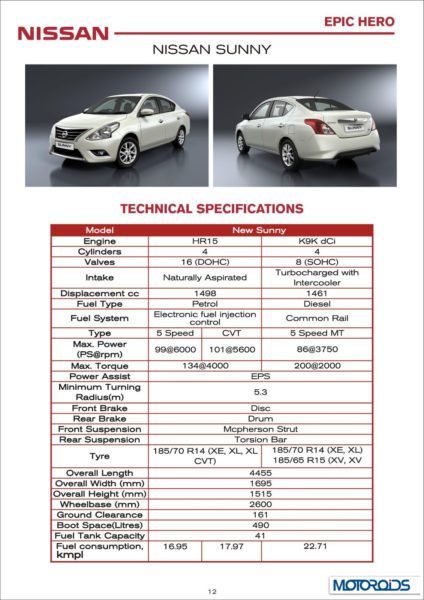