The 2017 Duke 390 is the most up to date KTM on sale in India. In terms of performance, hardware, technology and the sheer biking it delivers for the price, it’s a really tough act for any bike maker to follow. For the 2017 version, the Duke 390 is about INR 30,000 more expensive than the model it replaces. Sure, it was always an addictive hoot to ride, but is it really worth that much extra money? We rode it around Bajaj’s Chakan test track with a silly grin glued across our faces. Here’s why the Duke 390 is an even crazier riot in its new avatar.

The 2017 Duke 390 shares much of its chassis components and panels with the Duke 250, which in turn is inspired from the monstrous 1290 SuperDuke. The motorcycle looks uncannily similar to the Duke 250, but don’t be mistaken, there are some really huge differences here.

First off, there’s the one of a kind full TFT colour instrumentation, which is the piece de resistance here. Then you get a full LED headlamp system with 6 illumination points and DRLs. The switchgear on the left hand side is unique too, with buttons to navigate through the extensive menus on the instrument console which has two different illumination modes for day and night by virtue of a light sensor on the top right corner of the console. 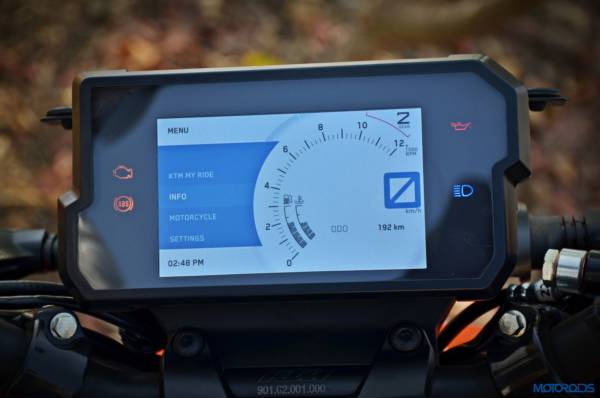 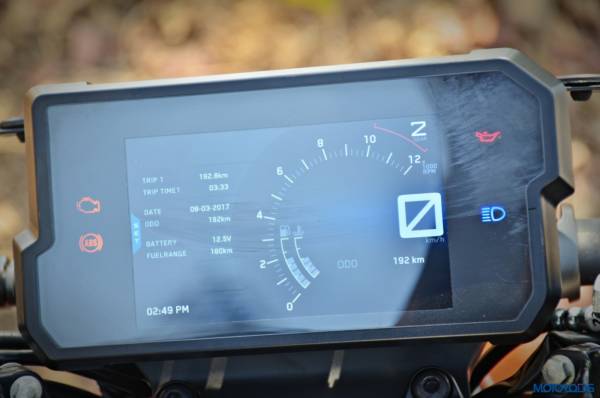 It’s quite an extensive information system, and we have explained it in great detail in a video, the link of which will be embedded right below.

Unlike the Duke 250 though, and like the RC 390, the brake and clutch levers are adjustable to suit different glove sizes or hands. 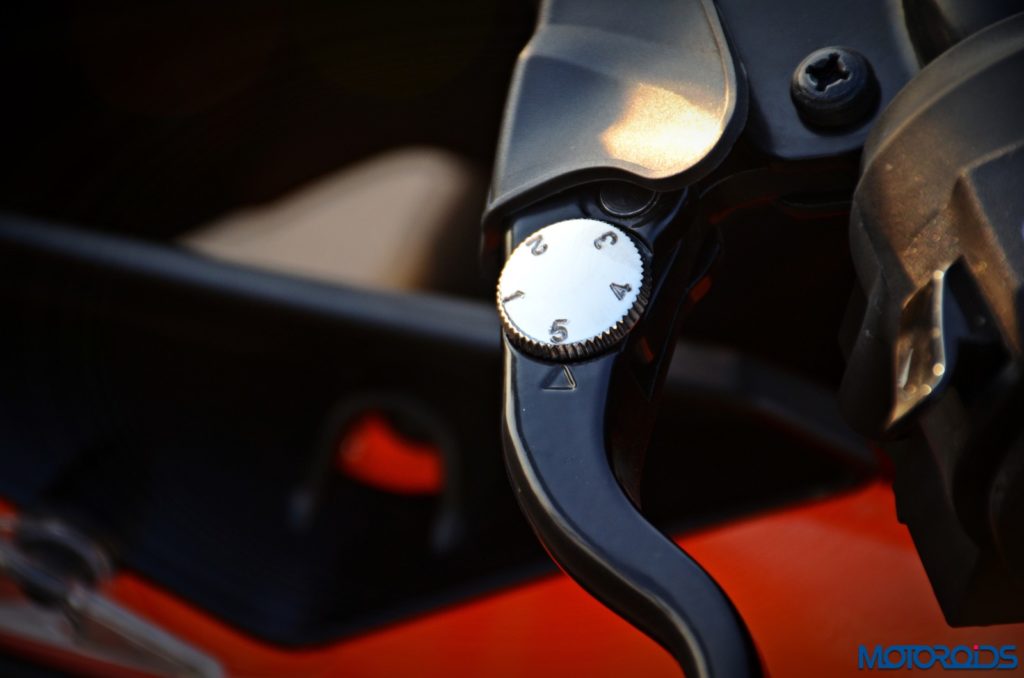 The seating position is slightly higher than the outgoing model and the rider foot-pegs are slightly more rear set and higher too. 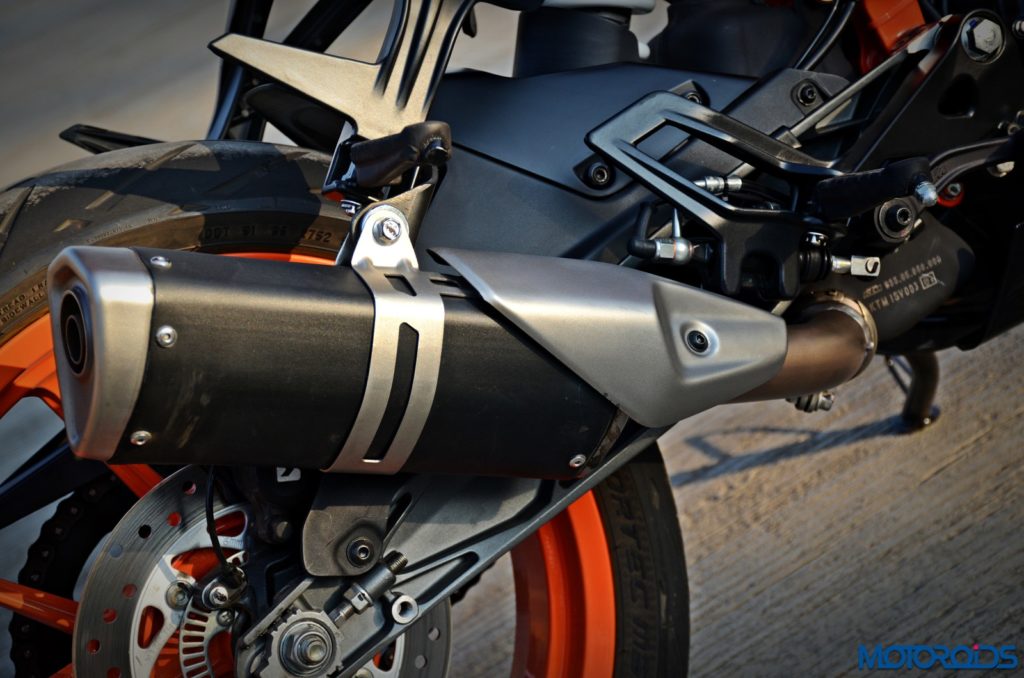 The underbelly exhaust has given way to a new side-swung exhaust primarily for BSIV and Euro IV compliance. Also, while the rear sprocket gets a tooth less at 44 teeth, the overall gearing remains the same. The bike obviously gets the slipper clutch along with bigger, sharper 320mm brakes.

Tyre speed rating has been reduced. KTM claims that the new H rated tyres rated for 210 km/h are still way above the speed the bike can manage. The new tyres are of a slightly harder compound. They’ll be cheaper by a few grand too. KTM insists the reduction in rating won’t affect the overall performance, while reducing purchase cost and increasing tyre life. We’ll let you know in detail about the performance of these in a bit. 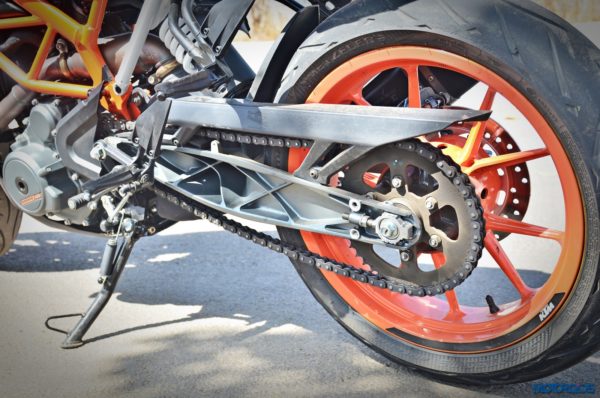 The bike gets switchable ABS, along with Road mode which engages ABS at both ends and SuperMoto mode which turns only the rear ABS off.  You also have the off mode here to turn ABS off on both wheels. 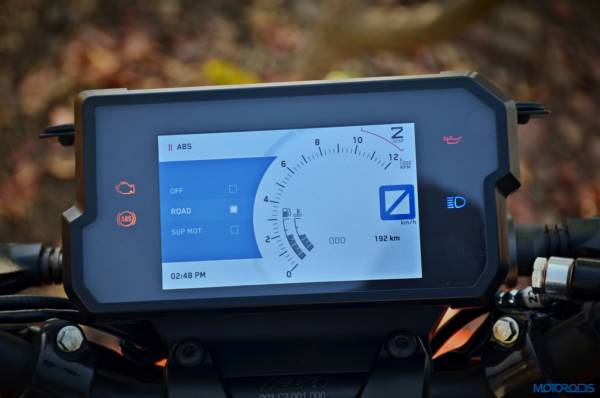 Peak power from the motor remains the same as before at 43.5 PS power, though the peak torque has gone up by 2 NM and is now rated at 37 Nm. The side swung exhaust along with the open cartridge front forks have added about 5 kg to the bike’s weight. Has it affected the performance?

Well, acceleration remains terrific as ever, and the KTM 390 Duke still manages the 0-100 km/h run in less than 6 seconds. We saw a top speed of 162 km/h, which was still climbing on the speedo at the Chakan backstraight on an extremely windy day. We’ll need a longer stretch to find its true top speed. 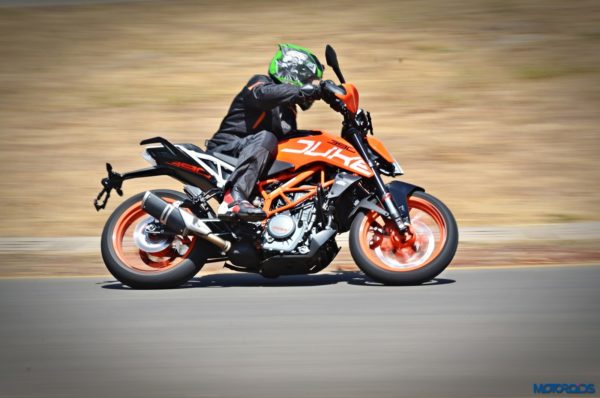 About the exhaust, it loses its canistery hollow sound with the inclusion of the side exhaust, which now emanates a much throatier, bassy note. You can refer to our 390 Duke review video to listen to sound of the exhaust note.

As with the 2017 RC390, the Duke 390 gets ride by wire throttle and CAN BUS with no ugly cables visible around the bike. The throttle response is sharp as a razor now. The ignition switch is also of the electromagnetic variety which just needs one gentle dab and doesn’t require you to keep it pressed. 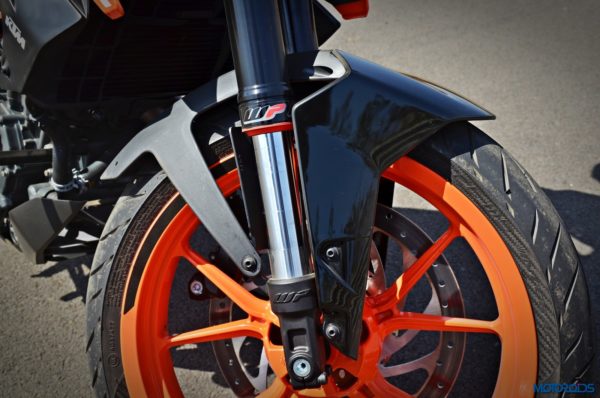 The 43mm dia front forks have been better damped and like the 250, can now be adjusted for an increased ride height of up to 8mm. They also feature improved seals for better protection against oil leakages. 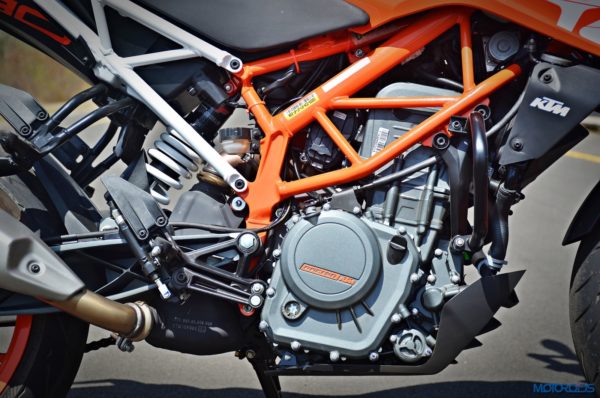 The rear suspension has been given a heavy overhaul too. It now features separate chambers for oil and gas to prevent mixing at high temperatures and keeps the performance consistent. The ride feels is more sorted now, what with better damping which prevents the machine from bouncing off the undulations and rough patches even while leaned over. With the tuned suspensions, the Duke 390 feels more mature and responds very keenly to even the smaller imperfections on the road at speed, with great alacrity. The rear suspension also gets a sleeve for protection against dust and muck.

Like the Duke 250, the Duke 390 gets a new split trellis frame with bolt on sub frame which is painted in a contrasting white shade as against the orange for the main body. We must say, the Duke 390 looks absolutely smashing in that shade of orange, which is the only colour on offer for the model. 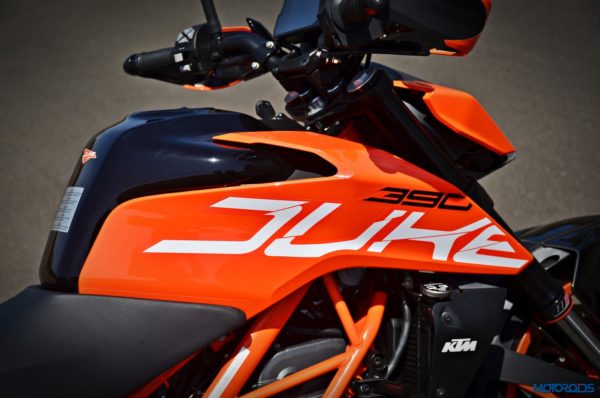 The all metal tank is now bigger and can store a volume of 13.5 litres. The seats, like on the Duke 250 are better padded, are wider and much more comfortable than before. The new shape of the tank and the extensions offer more space for the rider’s knees, facilitating better control and movement while the bike is leaned over.

The hubs for the 2017 Duke 390 wheels are larger. The wheels themselves are different as compared to the current 200 Duke and the outgoing 390 Duke and feature a different alloy composition. 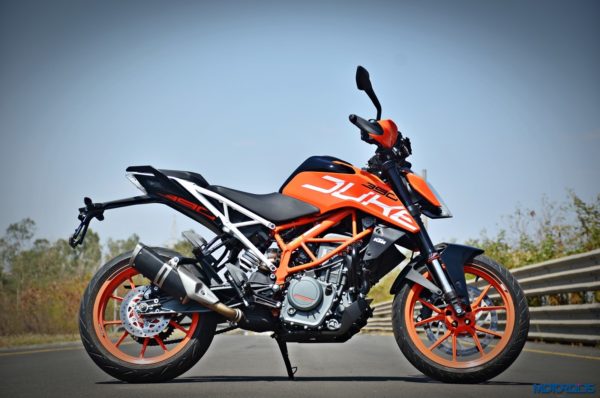 Alright then, on the move, the Duke feels as smashingly, addictively quick as always. Like an energetic, fervent young pup, it’s extremely keen to gets its paws up in the air, and what a rush it is to get it off the line.

The throttle response is lightening quick, and that engine responds to the tiniest twist of the wrist in the most flagrant manner possible. This motorcycle feels alive with energy and an intent to rush through its rev range right from the word go. The 100 mark is disposed in the third gear in a manic sub-6 seconds. There’s no shift indicator per se on the new instrument cluster, but the tacho throbs and gyrates in a hue of red as you reach the upper echelons of the rev range. The electronic tacho indicator oscillates wildly between 10 and 10.5 thousand revs before the limiter cuts in. 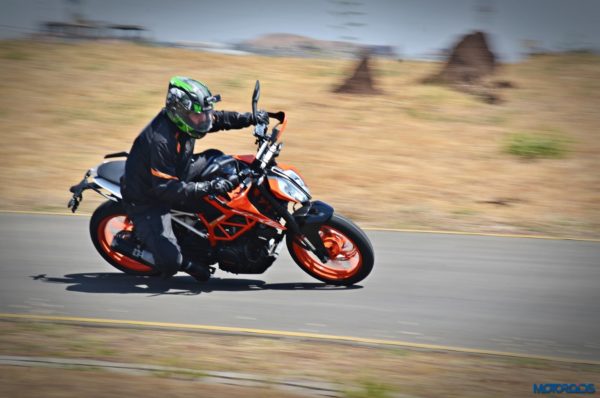 A big change in term of performance is a relatively strong mid range, thanks probably to the increased torque, which is by virtue of a bigger air box. The new Duke 390 feels much stronger through its mid revs, and comes across as a more practical, more usable motorcycle for the city. We’ll have to wait for riding the motorcycle in the real world for the final verdict, but for now, this one definitely feels punchier through the mid revs.

The engine on the new Duke 390 remains unchanged, and the meat of its power starts kicking in at 6000 revs and beyond, taking you hastily to its addictive 10,000 rpm limit. It’s an incredible engine, which makes the Duke an incredibly enjoyable machine, and in its 2017 version, it’s only better with that solid mid-range sock.  The fuelling is perfect, at no point would you feel sudden spikes or drops in power delivery while accelerating progressively. 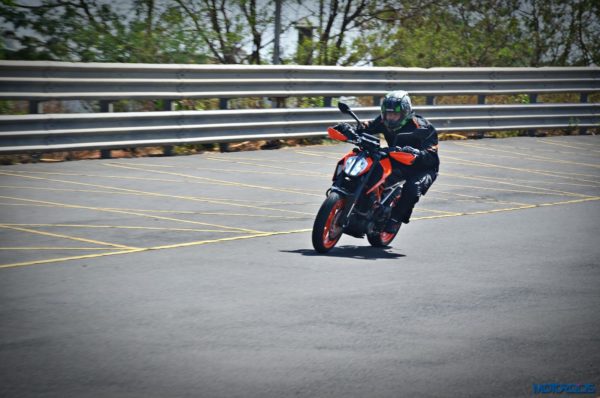 In terms of city usability, the engine would start revving smoothly and would stop knocking above 3000 revs at speeds above 30 km per hour in third gear. For fourth gear, the engine smoothens up after 4000 clicks, while for fifth and sixth gears, it needs to be revved a couple hundred more rotations to smoothen out. The knock free speeds for fourth, fifth and sixth gears are 45, 55 and 65 km/h respectively.

On the move, the Duke feels bristling with raw energy right from the outset. The riding position is a tad more aggressive than the previous bike. The new suspension and its superior damping dispose undulations beautifully while aggressively leaned over. It’s capable of handling a wider range of road imperfections without letting the bike unsettle. 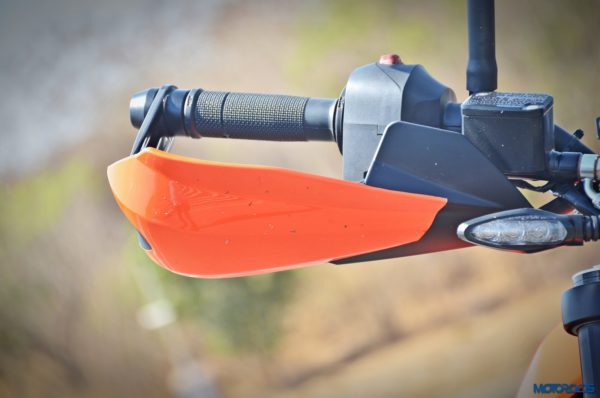 The relatively upright riding position and the flat handlebar isn’t the best recipe for track use, and as compared to the razor sharp RC390 the Duke feels a tad more on the edge, a tad more temperamental if you really ask us. But guess what, that really adds to the excitement and we had a riot with this crazy machine around Bajaj’s Chakan test track.

The chassis in wonderfully well set in isolation. However, in comparison with the RC that we rode here a few weeks back, the difference in the sharpness is quite evident. You do require some extra effort while snaking your way through those turns with that pocket monster of an engine trying to lay down all its power to the ground with the slightest twist of the wrist. It does put those Metzelers to some real test, especially on the demanding track conditions. The bite from the new 320mm front brakes is fantastic. They’re sharp, and full of feel, and can be modulated very well too. 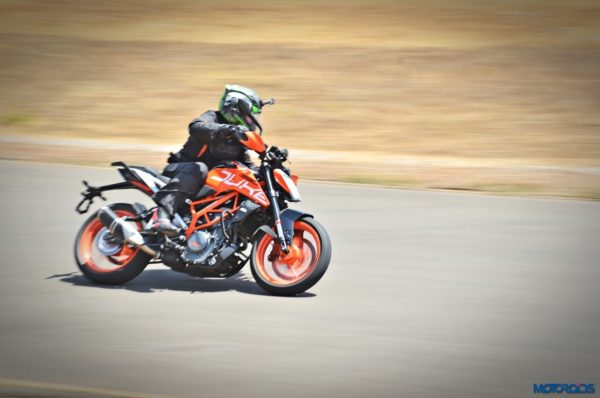 We do have a few things to say about the new tyres though. Blame it on the sweltering hot track on the test ride day, and the resultant increase in tyre pressure, or on the new compound, but we did hear the front tyre screech more than a few times when dropping the anchors aggressively. At the limit, we had our moments with the rear as well. While they offer tons of grip, at the limit, the new tyres can sometimes feel edgy especially while you’re powering out at exits or braking really hard 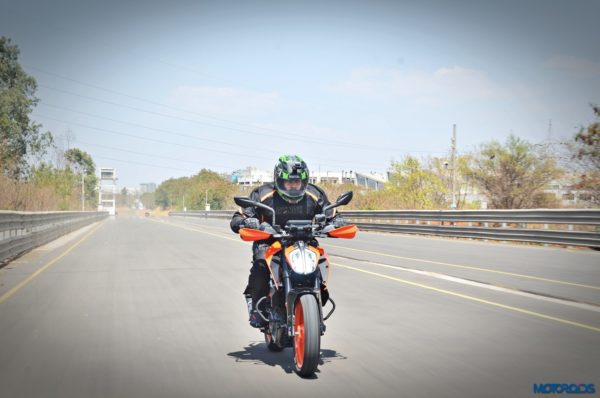 In all, the Duke 390 comes across as a more mature, more sophisticated, more tech laden, more practical and more beautifully crafted machine. In terms of performance, the stronger mid-range is the biggest takeaway, though the acceleration and top speed remains almost the same. The big differentiator, however, is the shiny new TFT instrument console, unmatched by any other motorcycle segments above its price range. Other bits that really matter are the bigger, sharper brakes, ride by wire throttle, wider seats, a bigger tank, better shaped knee recesses, a sportier riding position, bolt on sub frame, better suspension at both ends and a whole bunch of other useful bits like adjustable levers. On the downside, the new tyres aren’t probably as sticky as the previous ones, but they’re still pretty darned good in isolation. So yes, the extra 30,000 rupees KTM is charging you has been invested in places that really matter. 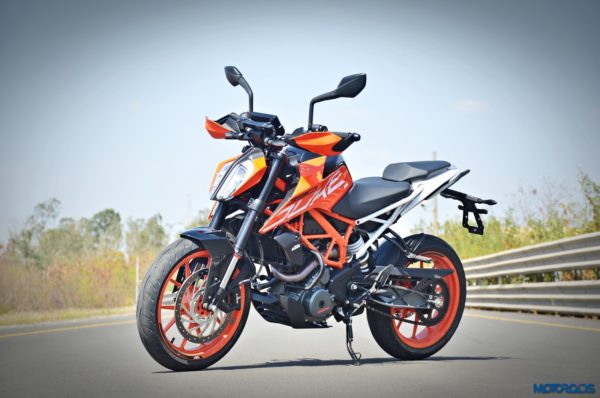 The 2017 390 Duke, then, is a worthy successor to its sensational forebear. As things stand, this one still is unbeatable in the real world – whichever way you look at it!

Check out an exhaustive image gallery of the new 2017 KTM 390 Duke at the bottom. Click on thumbnails to expand and slide.