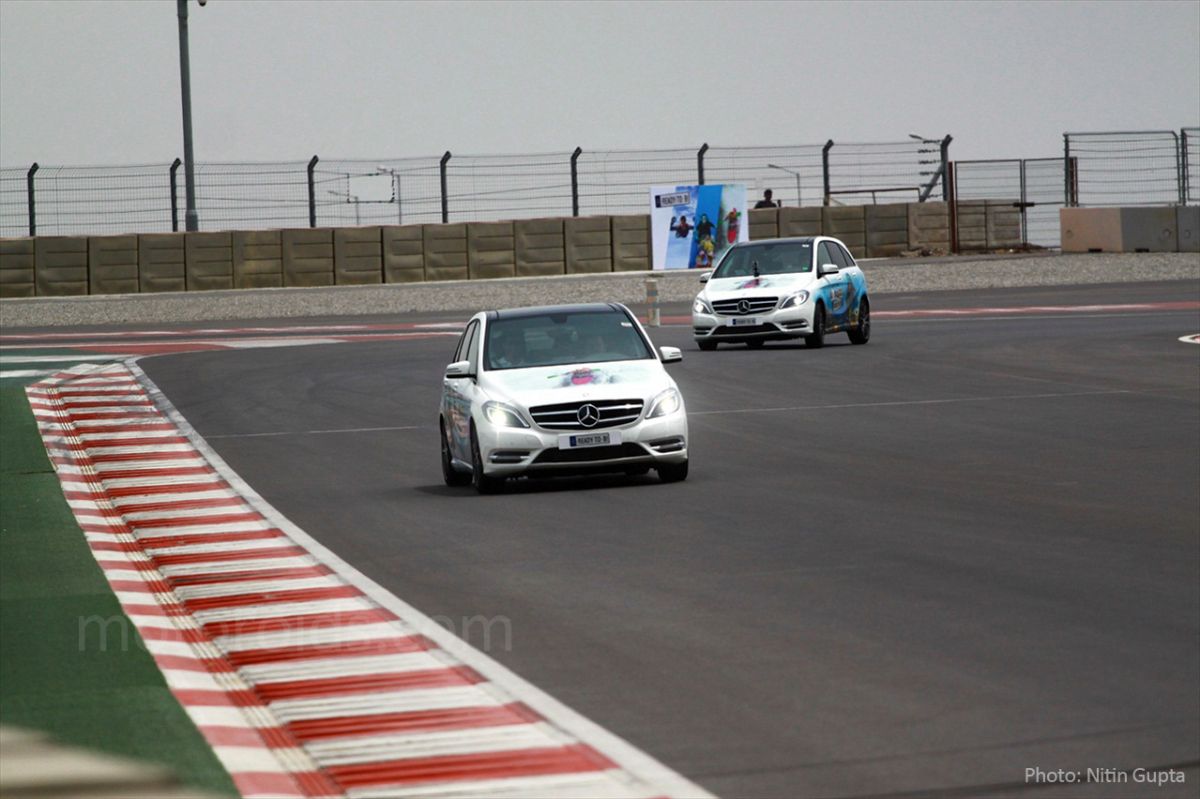 With the B-class Mercedes plans to reduce the entry barrier into its brand in India. The company, in a grand event at the BIC in the NCR region, gave select media a taste of their upcoming hatchback for the Indian market. Mercedes is projecting the new car as a Sports Tourer, a machine which would be your partner in an adventurous lifestyle. While it’s difficult for us to strike a connect between an adventurous lifestyle and a sleek looking hatchback, the good blokes at Mercedes insist that the B class ‘compliments your attitude and combines space and value like no other’. It remains to be seen how successful the idea of associating this car with an adventurous lifestyle and the new ‘Ready to B’ campaign turns out. We, however, were more interested in having a first-hand feel of the car, and telling you our own first impressions on the machine. So here goes. 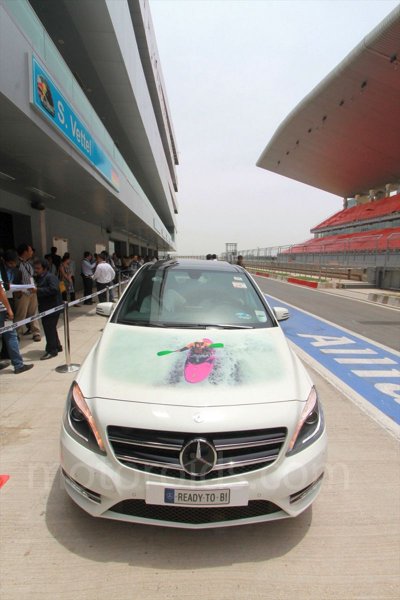 The new B-class adopts Mercedes-Benz’s new design philosophy, exhibited earlier by the new CLS and the C63 AMG. The distinctive new headlamps are fast becoming a hallmark of the Mercedes family and the B-class too adorns a pair of them. An oval-ish looking shape for the headlights, tapering towards the grille with boomerang shaped illuminated blinkers give the new B-class its characteristic eyes. A twin slat chrome grille with a big three pointed star in the middle complete the face. Bumper comprises of a huge central air dam with slim, horizontally mounted daytime running white LEDs flanking it.

In profile the extended length gives you a positive feel about the space within the cabin. Two strong character lines work towards adding some tension and athleticism in profile. The ORVMs seem to have been taken from the E-class sedan. The matters have been kept rather simple at the rear, which cannot ever be a bad thing. We wish the chrome tipped exhaust pipe was present on both the sides for a better visual balance. 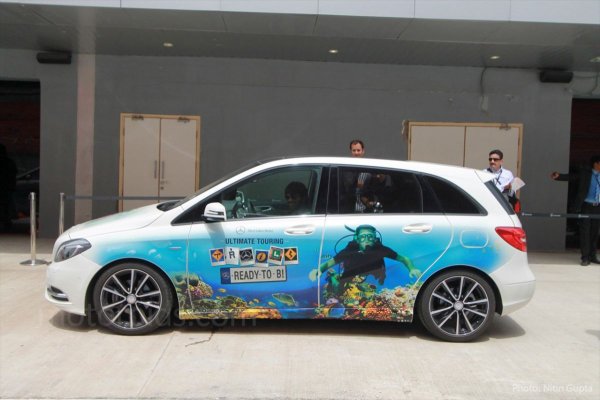 We drove the B200 variant powered by a 1.6 liter turbo charged engine with 154bhp of peak power. This engine, however, won’t be making it to India. We will get the naturally aspirated variant of the petrol powerplant with 120bhp and the 1.8 liter B180 CDI diesel engine with 107 bhp of power and 250Nm of torque.  Another interesting aspect of the drive was that were presented with the imported, left hand drive version of the car, since the production of the machine has not started in India yet.

The cabin greets you with a high quality and fresh design. The three large round vents in the middle add immensely to the sporty appeal of the interior. There is a TFT display unit above these vents adding a bit of modernity and function to the mix. The center console is reminiscent of the E-class with its array of buttons. Overall, the all black interiors, with a unique pearl white-ish material on the dashboard makes the interior of the B-class delightfully premium and different from the rest of its brethren. The B-class may be a hatchback, but it’s quite big in size. Dimension wise, it would be longer, wider than some of the MPVs available in the Indian market.

The backseat is surprisingly roomy for a hatchback. Mercedes are claiming to have broken new ground in space optimization with the new B-class, and they seem to have some substance in their claims. The 3-spoke steering wheel looks and feels extremely classy. The instrument cluster has four analogue round dials. Digital central readout delivers a whole basket of information too. 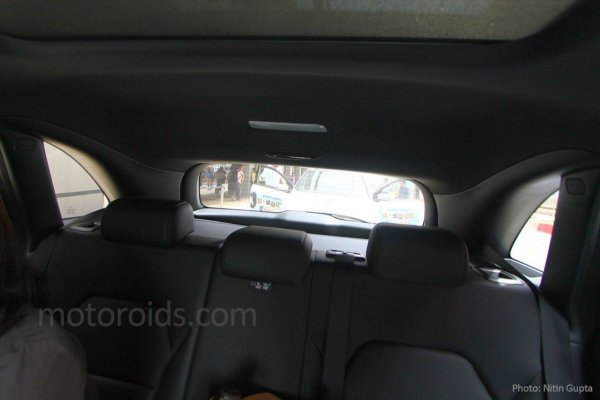 The track isn’t the right place to judge a car which is meant for road use. Most cars feel slow around the circuit, you cannot judge them on their ride quality and driveability is the last thing on your mind. Handling, however, is one aspect which could be judged very well around the racetrack, and that’s one area I am going to reserve my discussion to. I found the steering wheel slightly more weighted up than say, the current E-class or most other Mercs for that matter. It stiffens nicely at speed, and sends back a reasonable amount of feedback too. The B-class handles rather well. Mercedes is known for suspension settings skewed more towards a comfortable ride quality, the B-class however showed great composure when hurtled around with enthusiasm. The pace car kept us from pushing the B to its limit, but slowing down at times and using the big gap to attack corners helped us realize that the B-class is actually a more satisfying car for a driving enthusiast than its sedan counterparts. We managed to touch a top speed of around 160km/h on the long straight. This car is capable of 220km/h if let loose. 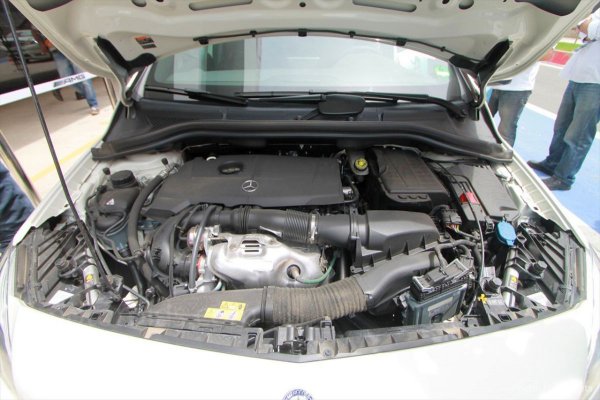 The grip from the Goodyear rubber was sufficient, and never did we feel the car struggling to maintain traction. Body behavior too was notable around corners and quick direction changes on chicanes were handled without any of the unnerving wallowy-ness. It’s a competent dynamic package, which would be really appreciated by enthusiasts. B-class’s handling is even more appreciable because of the fact that unlike its sedan siblings, it’s not a RWD car, a setup which has its unique advantages as regards dynamic prowess. Managing to handle better than some of its RWD cousins is a feat in itself. 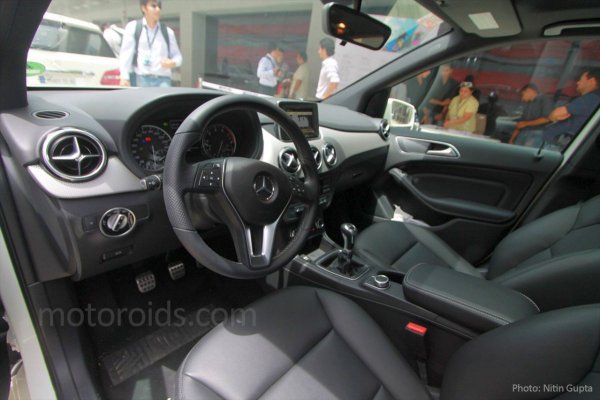 The engine on the car we drove was mated with a manual 6 speed transmission. In my honest opinion, the shift quality of the transmission left something to be desired. There was a bit of notchiness in shifts. I would expect more precise shifts from such a car. That shouldn’t be something to worry about for the Indian customers though, as Mercedes doesn’t have any intention to bring the manual transmission to India. We’ll have the advanced dual clutch 7G-DCT transmission here with paddle shifters. 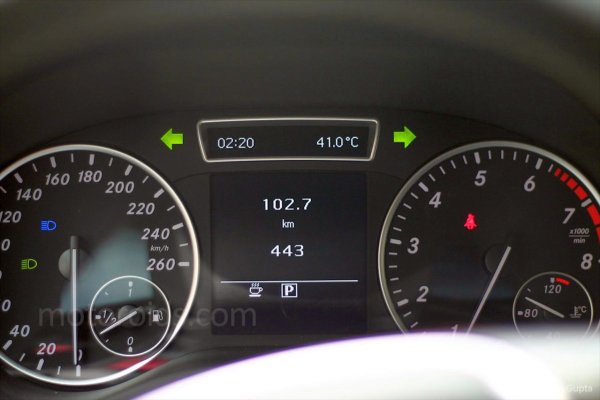 While Mercedes have not made any official announcement, some of the officials, during an informal conversation told us that the India bound B-class will have more features than the imported machine we drove around the circuit. It’ll be a fully loaded car with space, features and value as its USPs. Key features on the car would include a panoramic sunroof, attention assist, 7 airbags (including a knee bag), Lane assist, hill hold, reversing camera and many others. Initially the car would be brought in as a CBU. But the assembly would eventually happen in India in the next few years, based on the sales numbers the new car achieves.

While the Mercedes management has been saying that the car will be priced between 20-15 lakh, we somehow have a feeling that they may price it lower than that. There’re keeping their cards close to their chest as of now and may surprise the competitors at the launch. At a sub 20 lakh price, the B-class with its space, features and premium interiors would truly present itself as a yummy proposition for those looking to enter the premium segment. At that price, would the B-class be your premium car of choice? Do let us know your views. 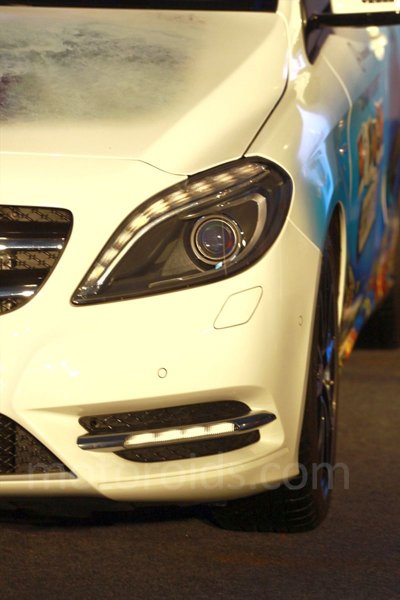