Home Maserati Maserati Ghibli Review: A Maser Like No Other

Only six months after the presentation of the sixth generation Quattroporte, Maserati launches another brand new model with an old, glorified name: the Ghibli. Word and Images: Akis Temperidis

So what’s the Maserati Ghibli all about?

The historic manufacturer from Modena lives a phenomenally creative period, one year before celebrating its 100 years. 2013 is the first year of a market assault that is supposed to transform the brand completely till 2015.

Following Sergio Marchionne’s group strategy – the American Style, Italian CEO of Fiat and Chrysler – and under the leadership of German engineer, Heinz Harald Werster, the Alfa Romeo-Abarth & Maserati boss, the Trident brand is destined to grow dramatically. From a modest manufacturer with a single plant producing two models and 6000 units in 2012, Maserati evolves to a medium size car industry with three plants capable to produce 5 models and 50.000 – yes, fifty thousand cars on an annual basis. 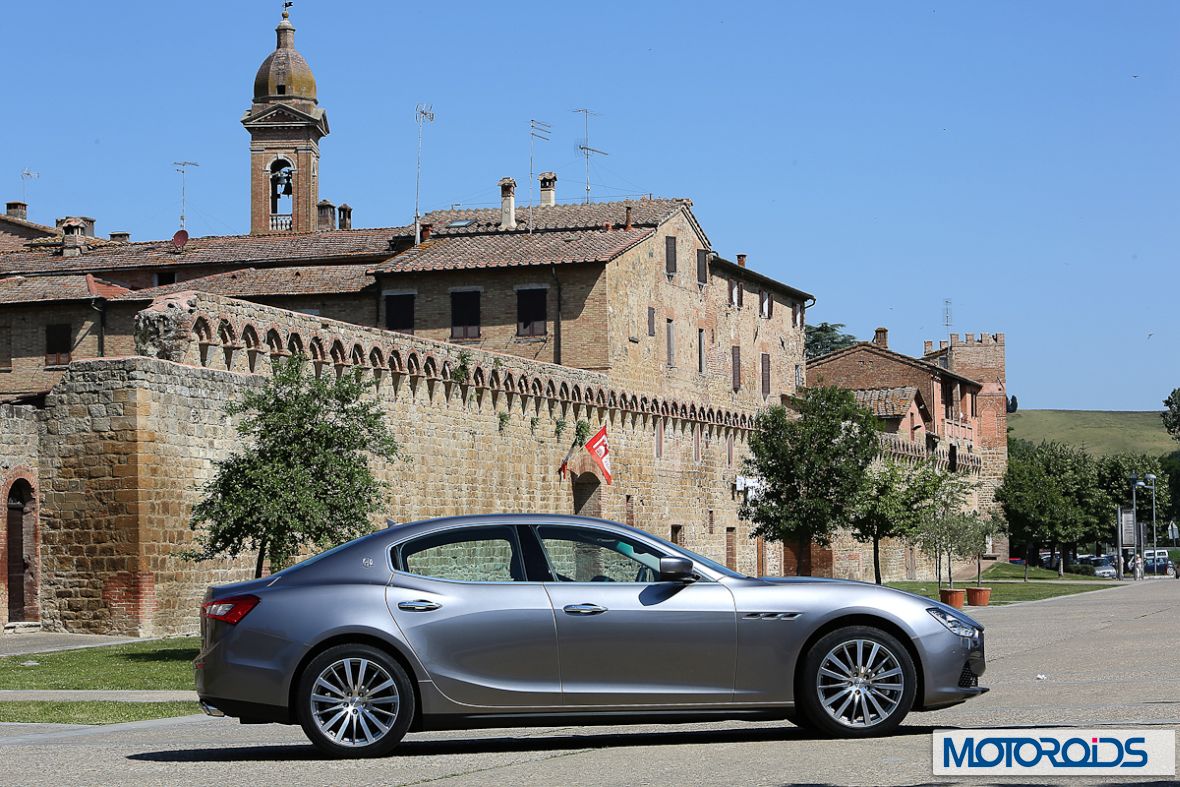 Is this possible in a period of devastating crisis for the industry? Maserati people have studied well the challenge they face. They also know that expanding their model range, they can target the 100% of a million potential customers in the luxury class, while their cars could target only 21% of them one year ago. Numbers prove them right. For 2013, there are already 14,000 orders for the three Maserati models – an impressively increased demand by 130% from last year’s production levels.

We can say that Maserati takes the big turn Porsche did more than a decade ago, when Cayenne was launched. It is not an easy task and big money is involved from Torino for the building of new factories to produce brand new platforms and engines. 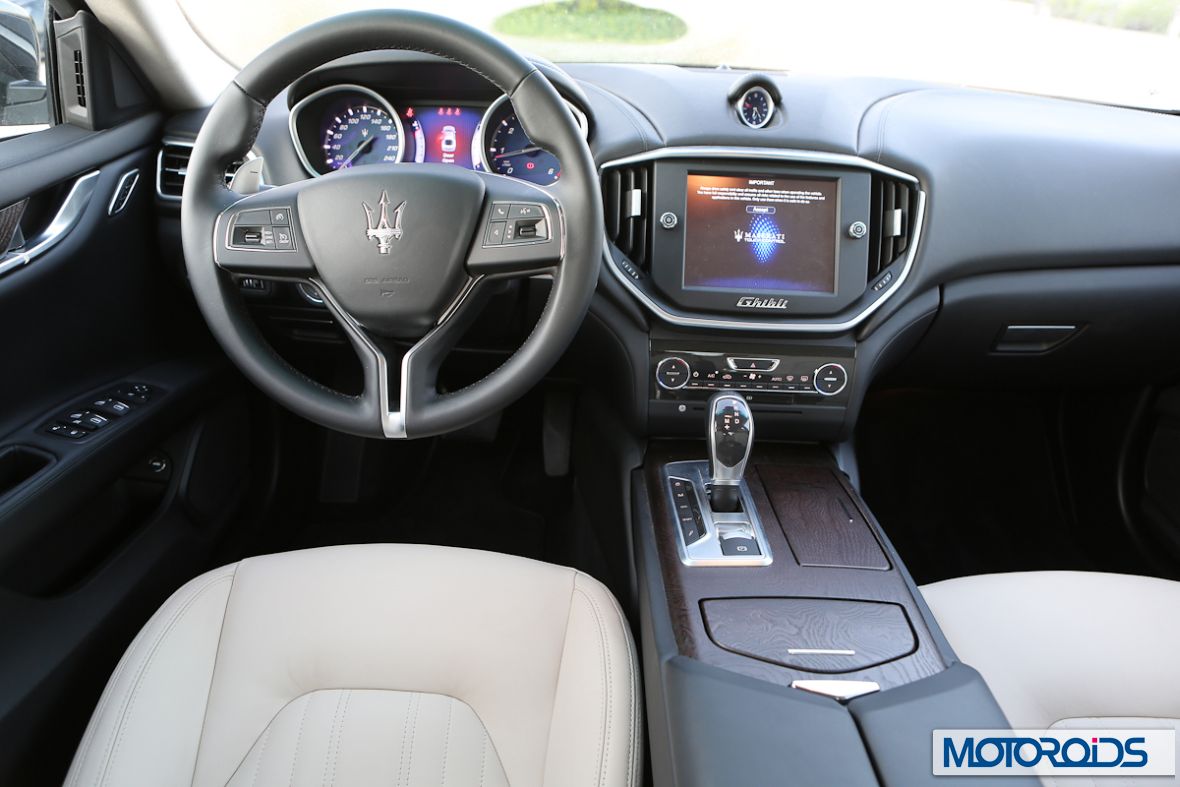 Ghibli is the second big step in this direction. The third will be in 2015 with the presentation of the Levante, the luxury Maserati SUV that initially was supposed to be built in the US but it was decided to be a “made in Italy” product, like all Maserati cars.

Ghibli is a shrunk Quattroporte, but still a big car, ready to challenge top versions of mainstream, E-segment sedans from Germany, like the BMW 5 series, the Mercedes E Class, Audi A6 and their coupe‘ alternatives like Audi A7, BMW 6 and Mercedes CLS. Ghibli also challenges full size, premium sedans built by Lexus, Infinity and Jaguar. 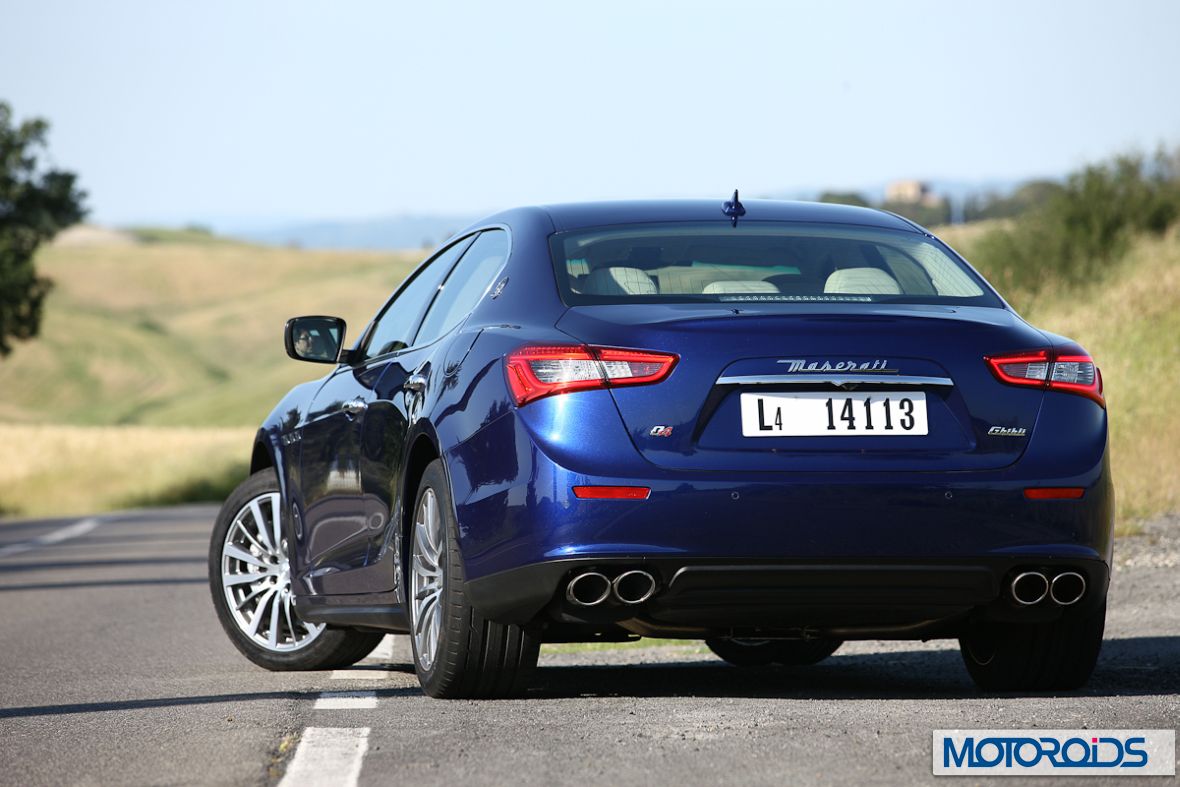 Technically speaking, Ghibli is a sister model to Quattroporte, which is good news as it secures high-tech standards. The car is 4,97 meter long, 29 cm shorter than the Quattroporte with a 2,998mm wheelbase, 17 cm shorter than its larger sibling. The body is 1.46 m high, 2 cm lower than the QP and as wide as that (with larger tracks!) making it look even sportier when it stands still. The four door body is impressively sculpted. It is low, like a coupe features a breathtaking – ala Granturismo – front end grill and has sinuous lines over the wheel arches (said to be inspired by the Maserati “Birdcage” of the ‘50s) and a massive, imposing rear end. 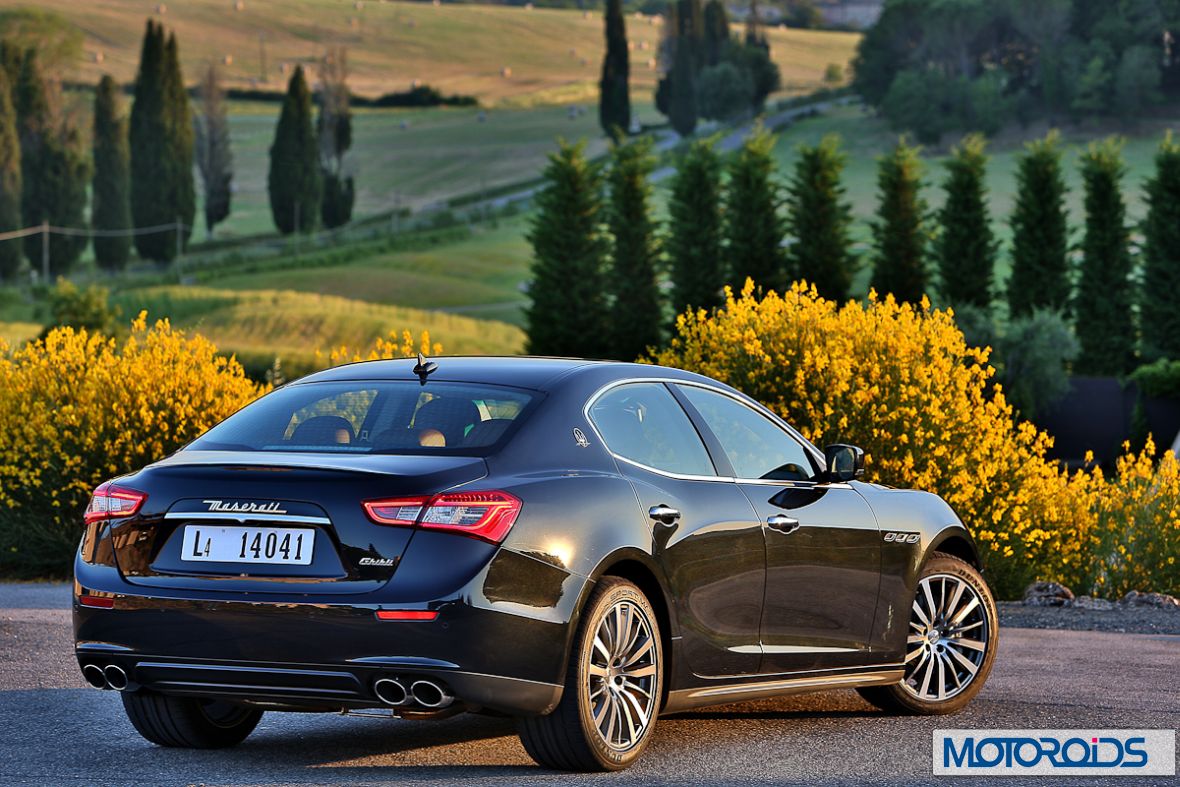 Ghibli is built in the same production line with Quattroporte in the refurbised – ex Bertone – factory in Grugliasco, at the outskirts of Torino. The cars are based on the same platform, that was built exclusively for them. The car body is 50% aluminium made for lower weight and utilizes magnesium at the dashboard strut, exactly like the more exclusive Quattroporte.

What are the underpinnings on the Maserati Ghibli? 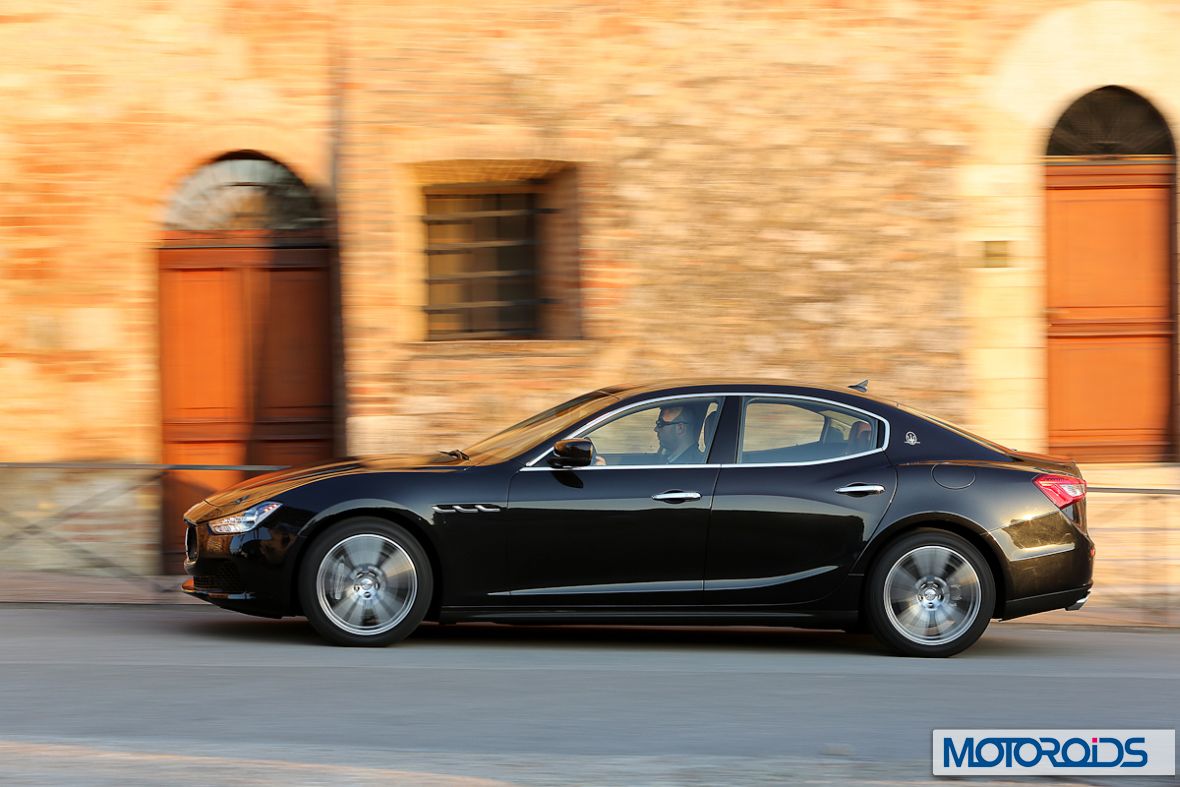 Both Maseratis use the same 8 speed automatic gearbox by ZF, that features 5 driving modes: auto, auto sport, manual, manual sport and ICE (Increased Control and Efficiency) for low friction driving. Manual mode is controlled by the central stick or from the paddles behind the wheel.

Suspension scheme is also the same with that of Quattroporte, with double, aluminium wishbones on the front and a newly introduced five link layout at the rear axle. The car comes standard with mechanical shock absorbers, while the electronically control, Skyhook shocks – which are standard on the QP – are optional. 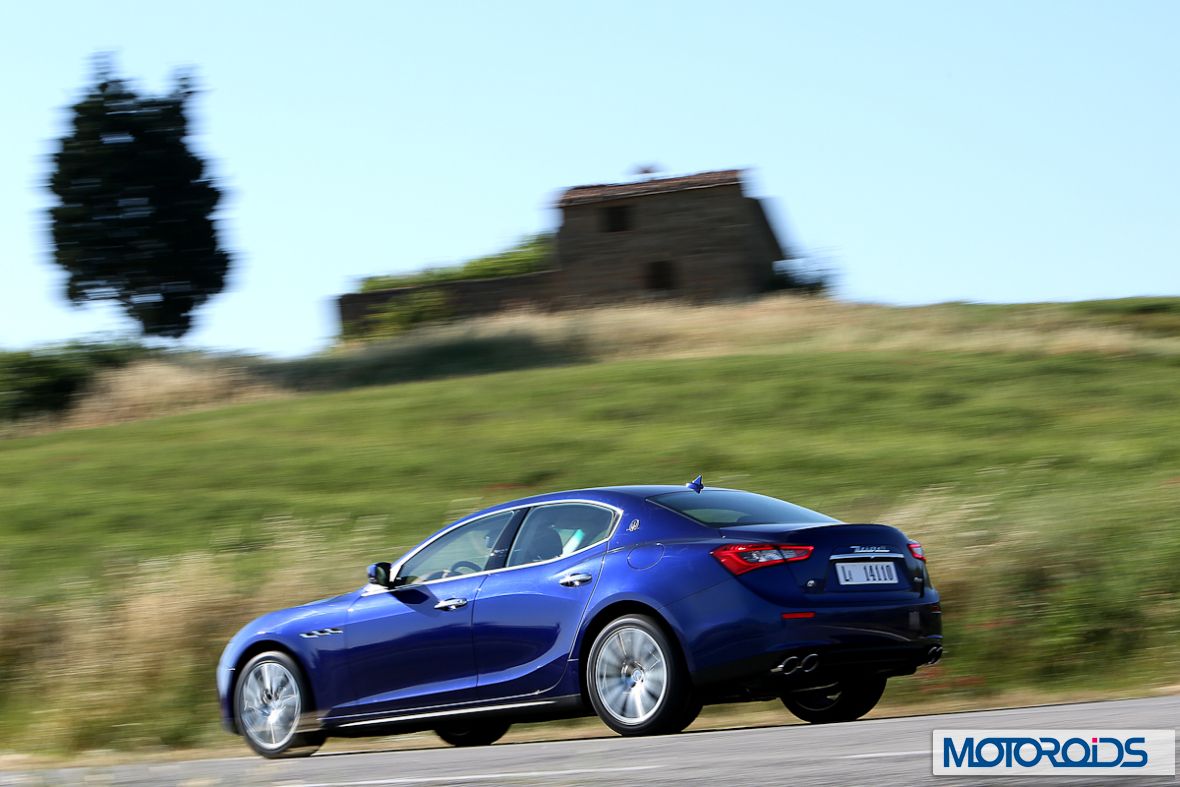 Last but not least, the medium size sport sedan features a Q4 version with an all wheel drive transmission, like its bigger sister. The system uses an electronically controlled multi-plate wet clutch in the transfer case from where a drive shaft delivers power to the front axle. The system prioritizes power to the rear axle, in order to keep the sporty character of the car. It generally transmits 70% of power to rear wheels but if needed it can split power output to both axles, up to 50-50%. The variable power delivery can be controlled in real time from the central instrument panel.

What about the engine range of the new Maserati? 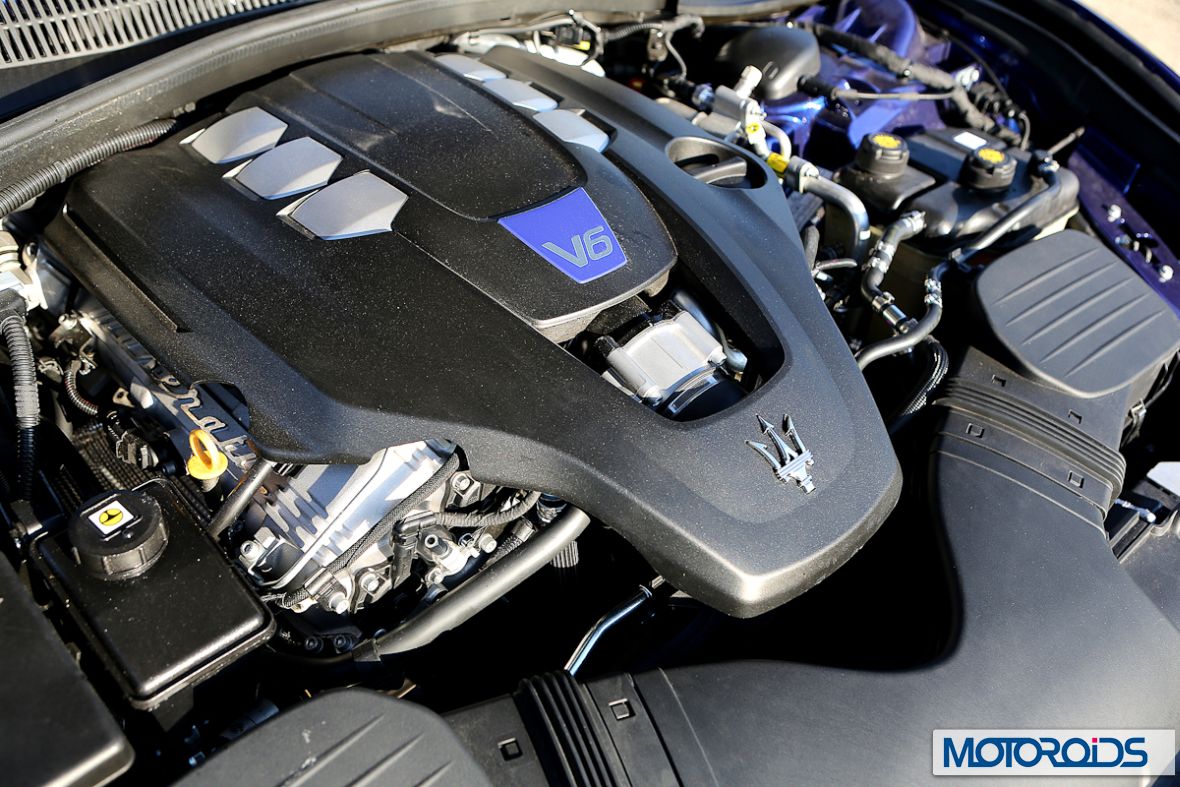 The V8 biturbo – always designed by ex F1 engineer Paolo Martinelli and built by Ferrari – is exclusive to the Quattroporte and is not scheduled to be fitted in the smaller Ghibli. 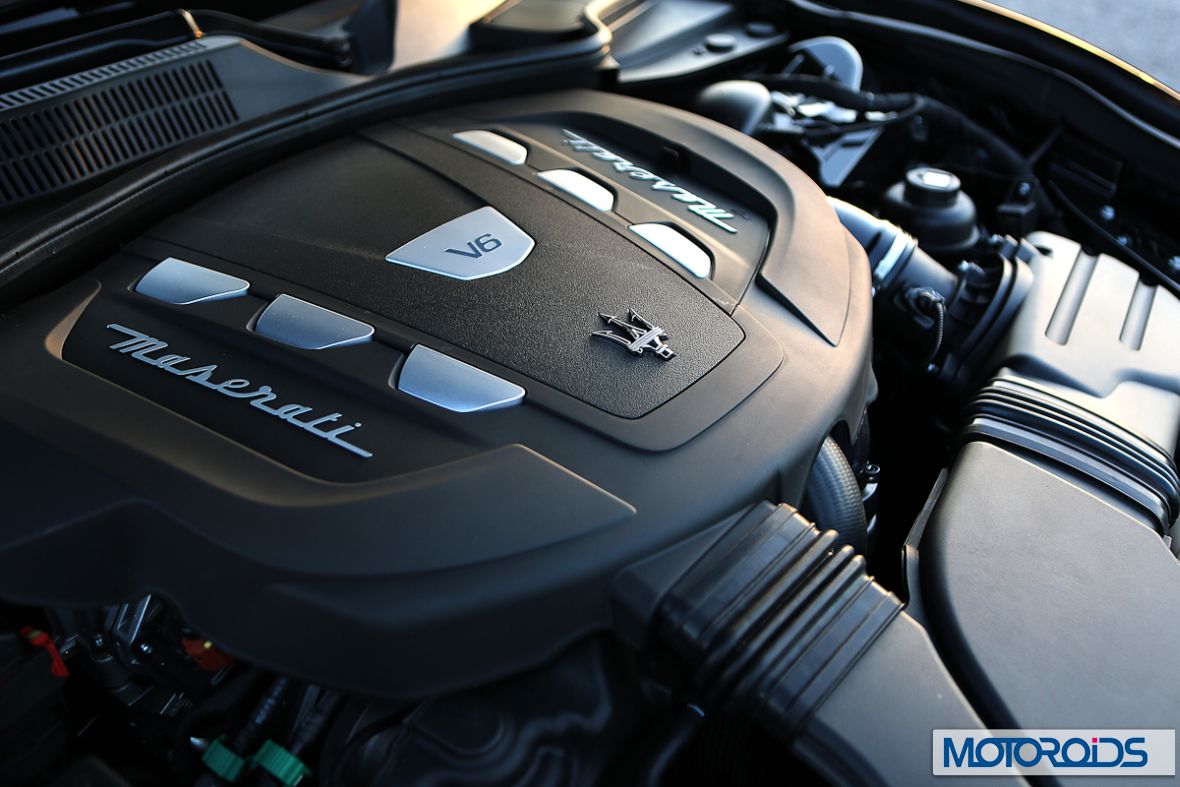 What is exclusive to the Ghibli range is the new V6, 3.0 litre diesel engine, built by Italian VM company. The common rail, single turbo unit was developed for Ghibli by Paolo Martinelli in Modena. The engine delivers 275 bhp@4000 rpm and massive 600Nm torque @ 2000-2600 rpm.

Ghibli is the very first Maserati in history with a diesel engine. Does this make sense? As far as marketing concerns, a diesel engine is the only way for an E-segment car to have a future in the European market and we can understand that. From the driver’s point of view, though, could this be a genuine Maserati on the road? 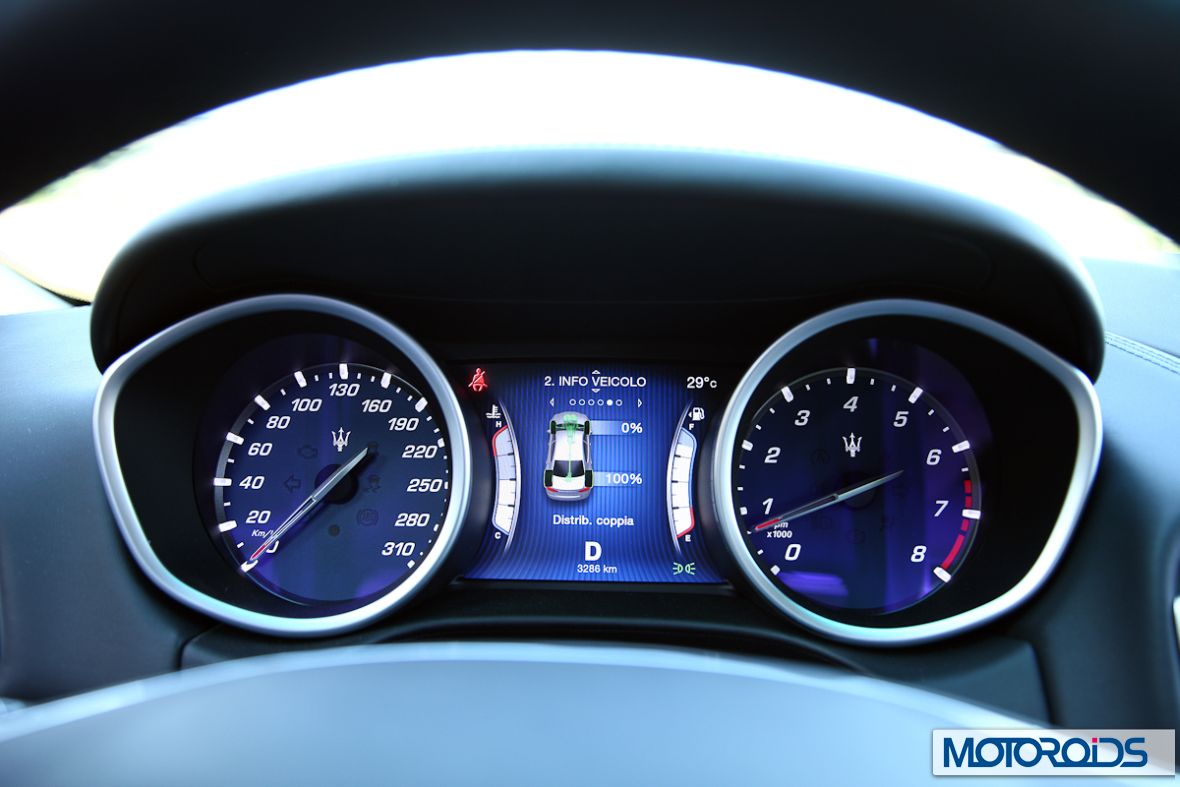 Invited by Maserati to drive the new Ghibli on the picturesque roads of Tuscany, I was curious about the diesel version, as I had previously tested the V6 Quattroporte that technically is equivalent to the Ghibli petrol versions. 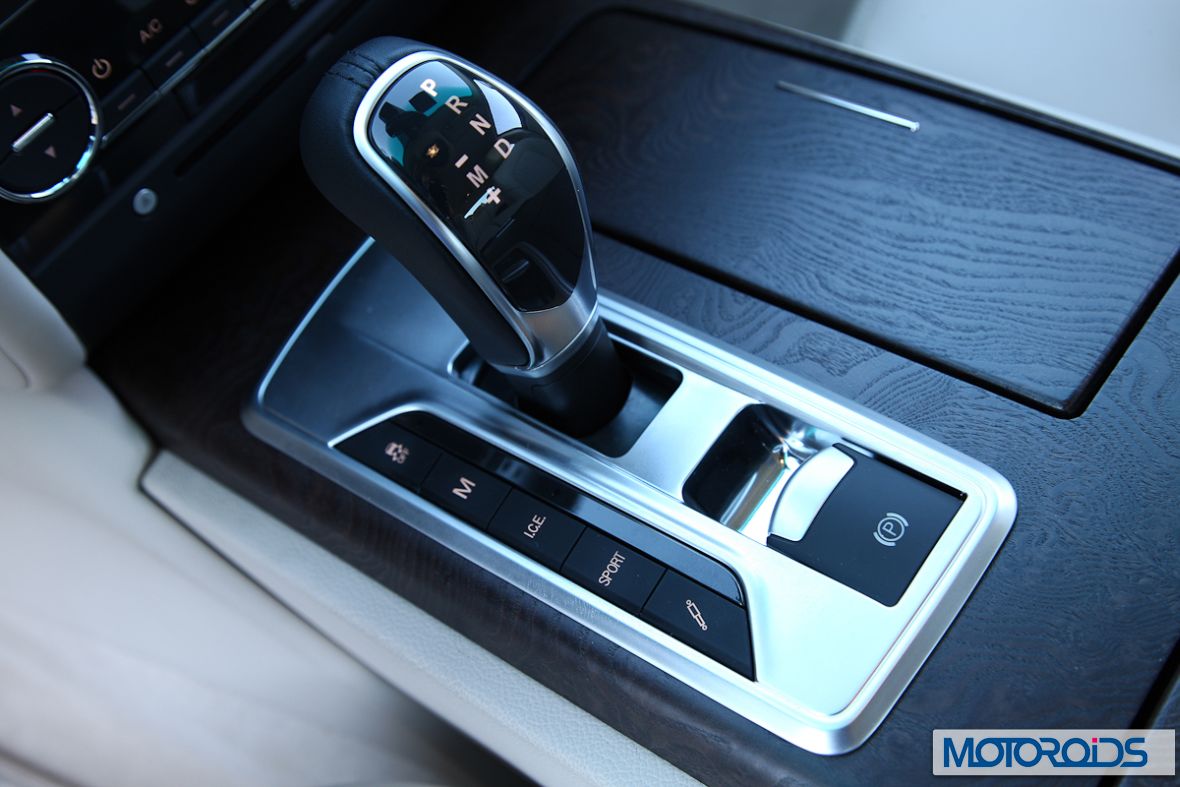 At the Press Conference, the Italians gave us an idea of how the diesel works. The recorded exhaust sound on the dolby surround Bower & Wilkins system seemed like an American V8. Not bad!

Driving the Maserati Ghibli in Tuscany 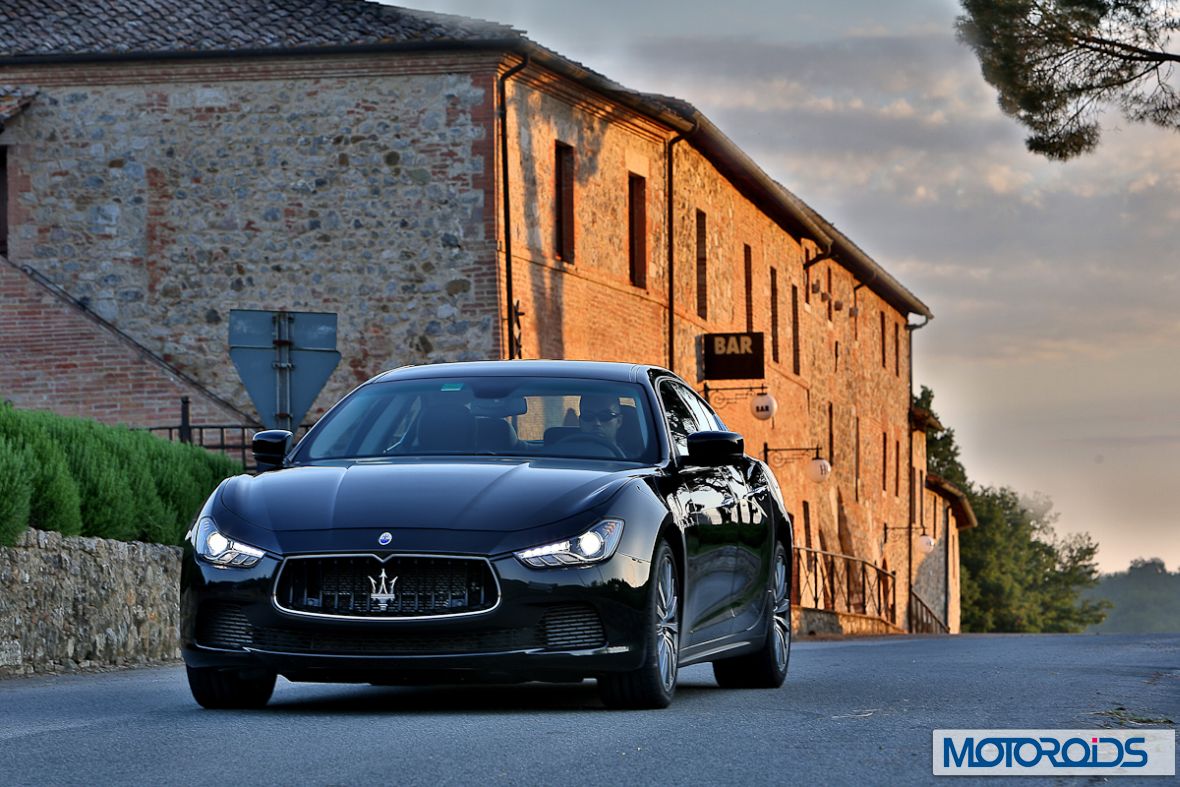 You sit on Poltrona Frau leather behind an ergonomic steering wheel sporting a big trident and some buttons for audio and trip computer control. The instrument panel is sporty, the same as in the Quattroporte, with a small, central screen where you can see all information, from average consumption to the power split to the front and rear axle, in the Q4 version. The leather dashboard is driver oriented with a 7” touch screen in the centre plus the iconic Maserati analog clock on top. Quality and selection of materials is superb in every aspect. Rear legroom is smaller than in the German competition but who cares? Ghibli is a Maserati and a Maserati is a driver’s car! 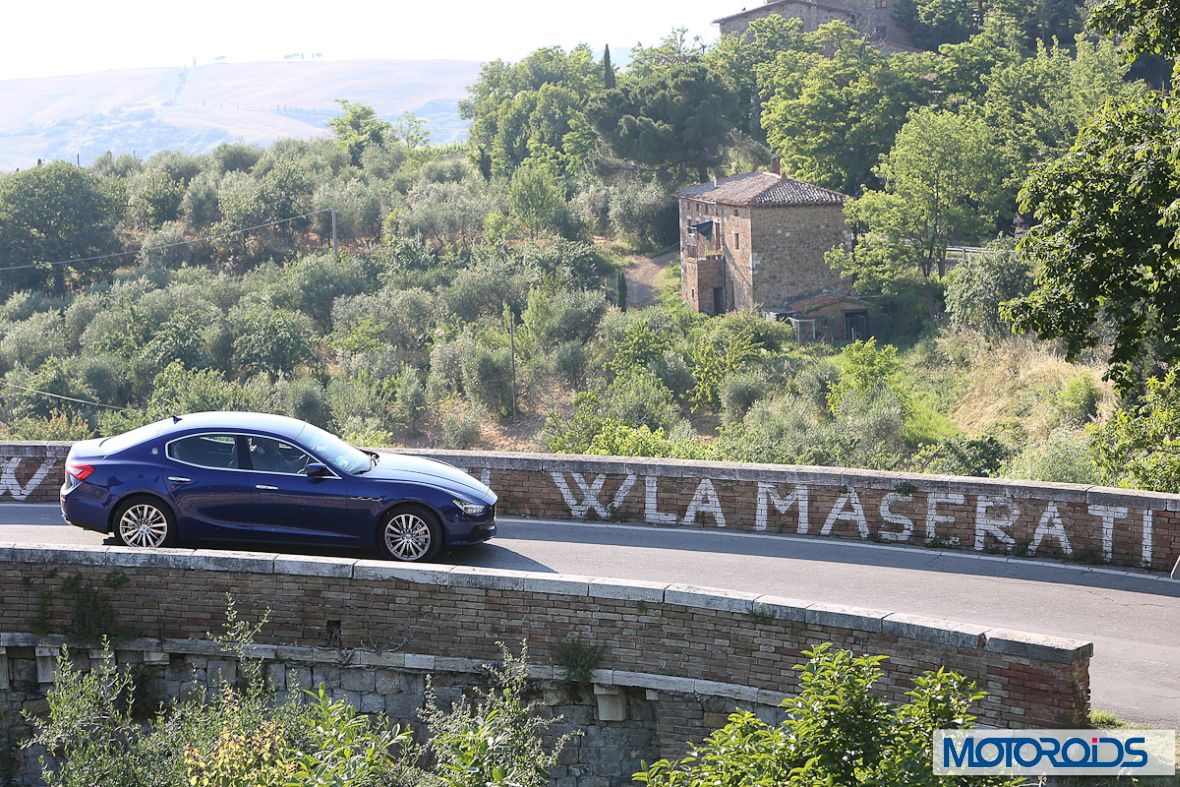 On the road, if you drive the Ghibli diesel first, you get impressed by the power delivery. The engine is extremely torquey and despite a slight turbo lag, collaborates ideally with the 8 speed gearbox. The result is an efficient machine for granturismo use that can be driven incredibly fast with minimum effort.

The driver should never care about revs, power is available everywhere in a small range, so the ZF gearbox works good to keep the pace on. The engine sound is not noticeable on idle, is well isolated on the “autostrada” and gets an angry tone when you press the sport button at the central console and the pedal to the metal: the hiss from the turbo is accompanied by a decent exhaust trumpet, which is partly mechanical and partly artificial. 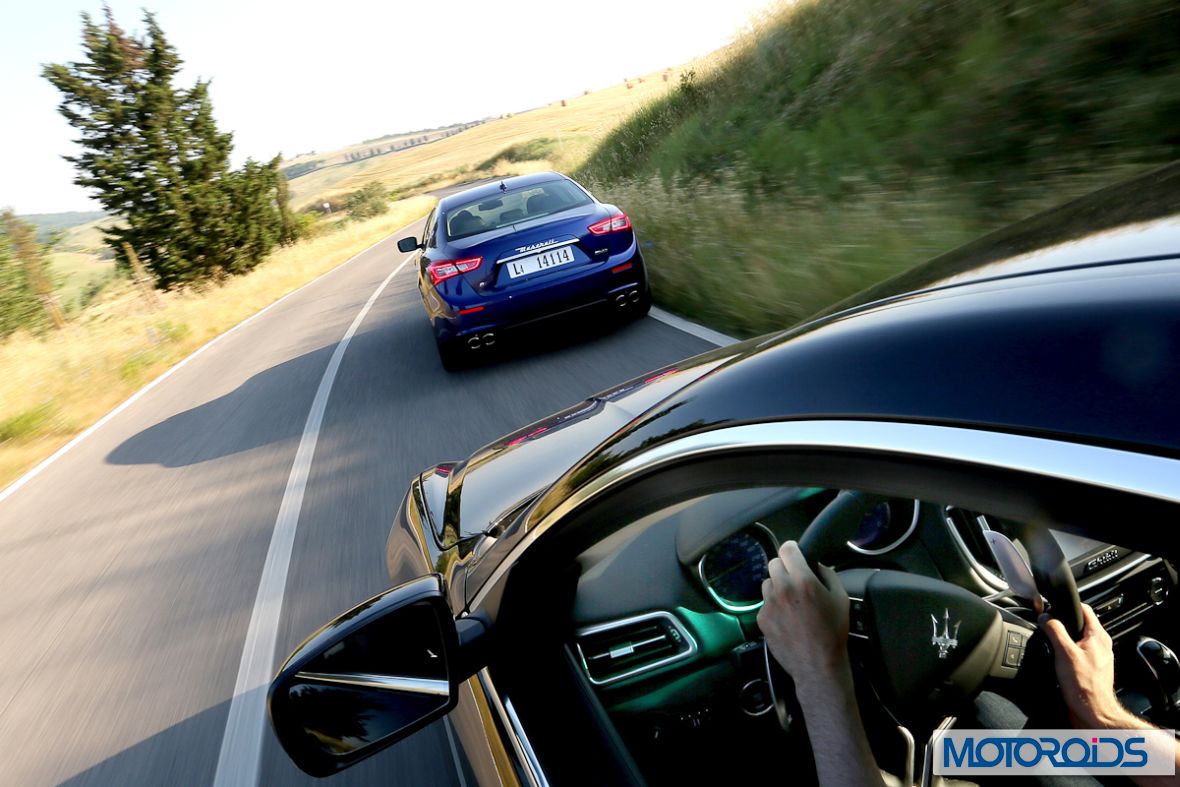 Two electronically controlled sound actuators near the quadruple tailpipes emulate the best tones of the exhaust sound. It’s an artificial way to give some character to the diesel roar and it works! I wonder what Maserati brothers would think about this: a Maserati without spark plugs (Maserati patented spark plugs before making racing cars!) with an audio system in its exhaust!

When it was time to change to the petrol version, Maserati people asked me what did I think about the diesel: “Great engine, fantastic performance but something is missing”, was my immediate answer. A great part of Maserati feeling was missing actually. I thought that after this, we could easily accept a plug in Maserati in the future, even if people from Modena don’t even think about it! But they didn’t think about diesel some years ago, right?

Anyway, I was happy to get into the Ghibli with the 330bhp and then to the top of the range Q4, with 410 bhp. I never got back to the diesel despite I consider it a safe bet against the German competition, thanks to its affordable – for the class – price of 66,000 euros in the European market. 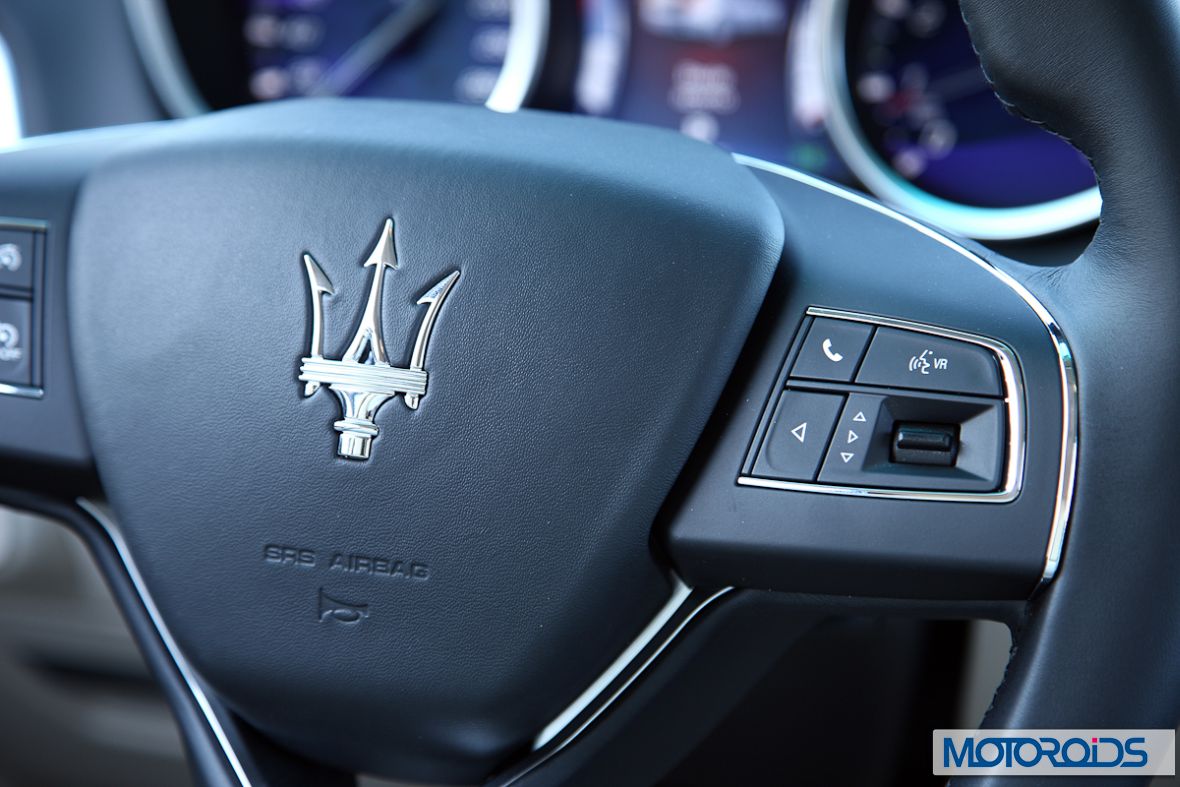 A Maserati is defined by its engine and Ghibli is at its best with the petrol engine. The V6 biturbo unit is responsive well below 2000 rpm, has no turbo lag and delivers breathtaking power till the red line at 6600 rpm. It is a symphony of torque and power playing the notes you expect from an Italian car.

Even if the 330bhp version is the most balanced and the one that suits better the character of the Italian sedan, the 410bhp is the one we would choose for the goosebumps it gives you on a twisty, Italian road. This is a genuine, four door Granturismo that can easily compete with the AMG and M versions of its competitors. 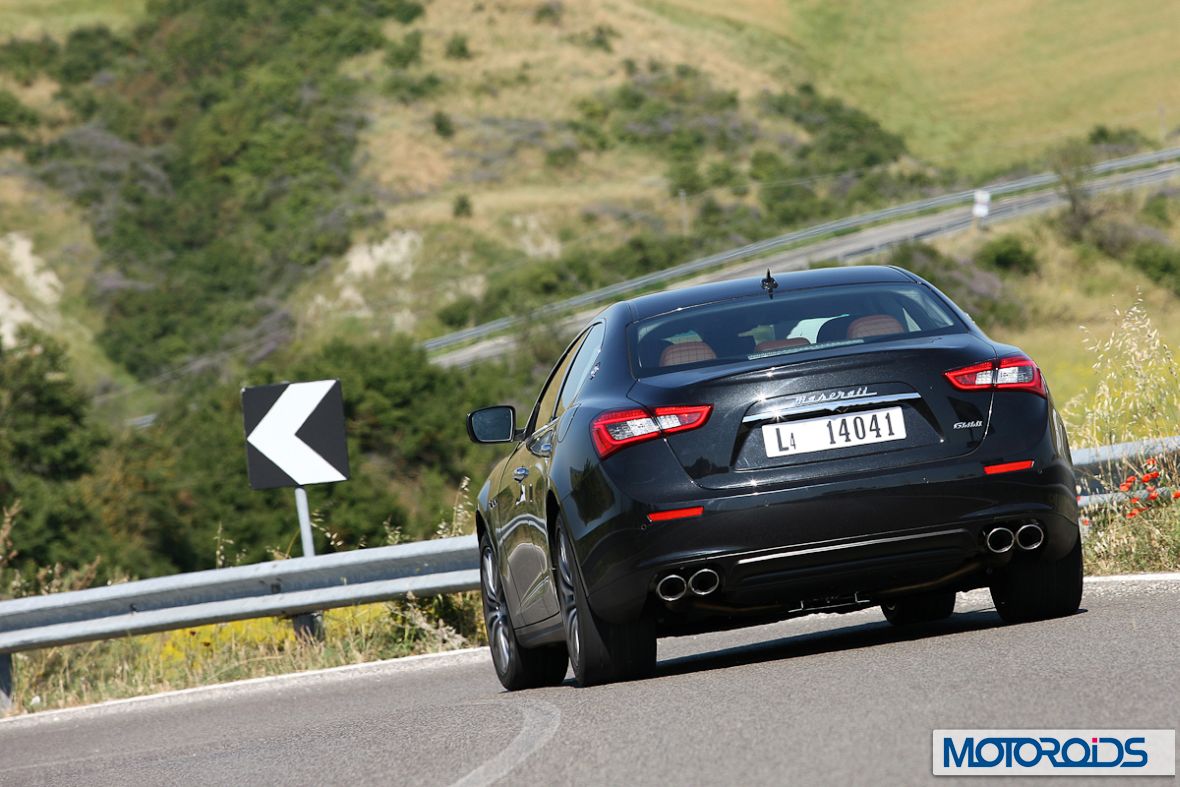 When asked, though, Maserati people say that they are ready for an MC Stradale version of Ghibli, even if they admit they have been extremely busy so far and they haven’t worked on it. We think a 500 bhp Ghibli would be a pleasant task for them.

On the road, the roar of the V6 is discreet when you need to relax and absorbing when you ask for thrills, pressing the sport button. The power of the V6 is thrilling even if the chassis is completely confident. The car looks and seems to be sitting wide on its wheels and on a twisty road shows all its pedigree. The ideal weight distribution (50-50) and the centrally located engine (behind the front axle) result in a genuine sporty behavior without the minimum understeering in the entrance of a corner, with fantastic response on brutal changes of direction, yaw rate at GTi levels and an astonishingly stable rear end, even under full power. 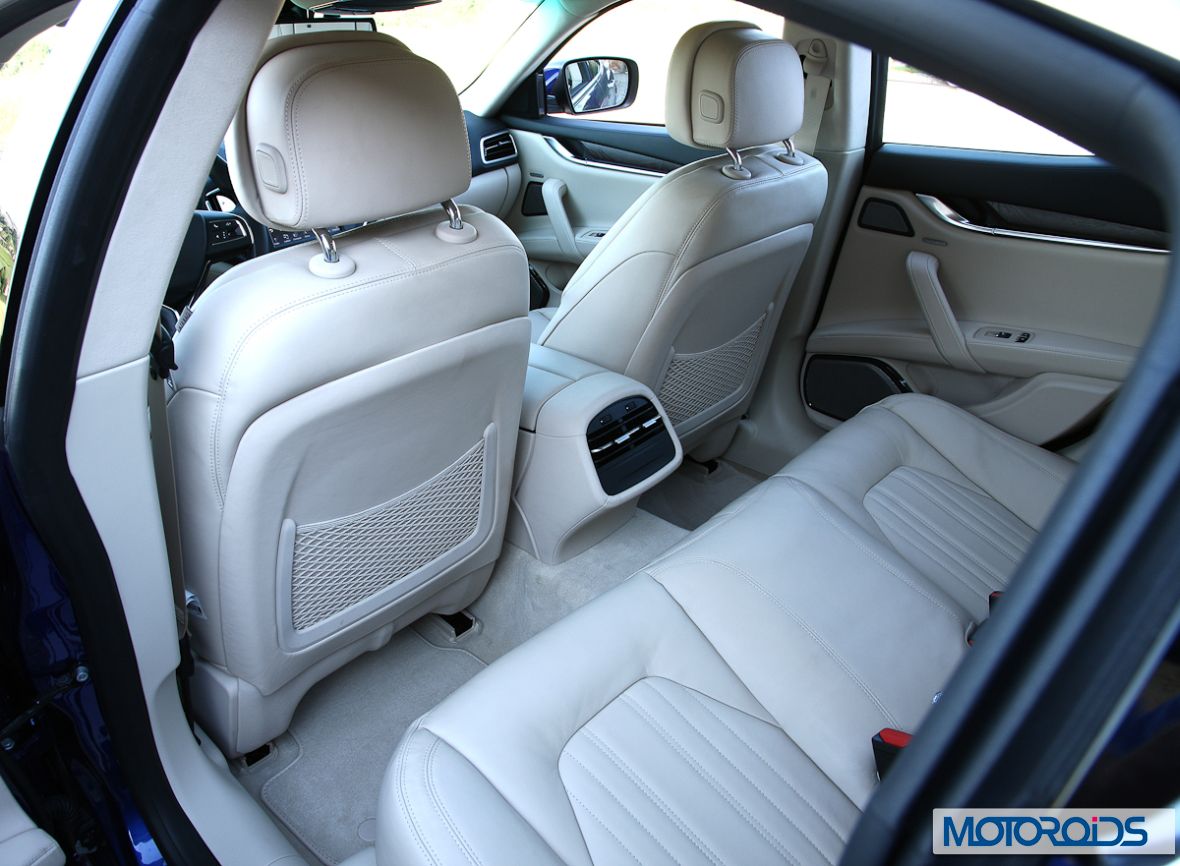 Of course, you can play with this sedan as you could in your Granturismo. You can select the sport mode for faster gear changes and better exhaust resonance, you can have 100% manual gearbox (that doesn’t shift on the rev limiter), you can stiff the suspension or even disengage the MSP to test the car’s and your limits without electronic protection. This way, the rear wheel drive Ghibli can offer you some imperial oversteering on tight corners thanks to the mechanical limited slip diff, where the Q4 will remain neutral or slightly oversteering even with full gas!

What makes Ghibli a different animal from its competitors is its sensible, hydraulically assisted wheel, that gives you the most detailed information on the road. I like when a car feels the camber of the road. As far as the powerful Brembo brakes concerns, you will never feel them tired, even after a long hard driving in a special stage of Tuscany. 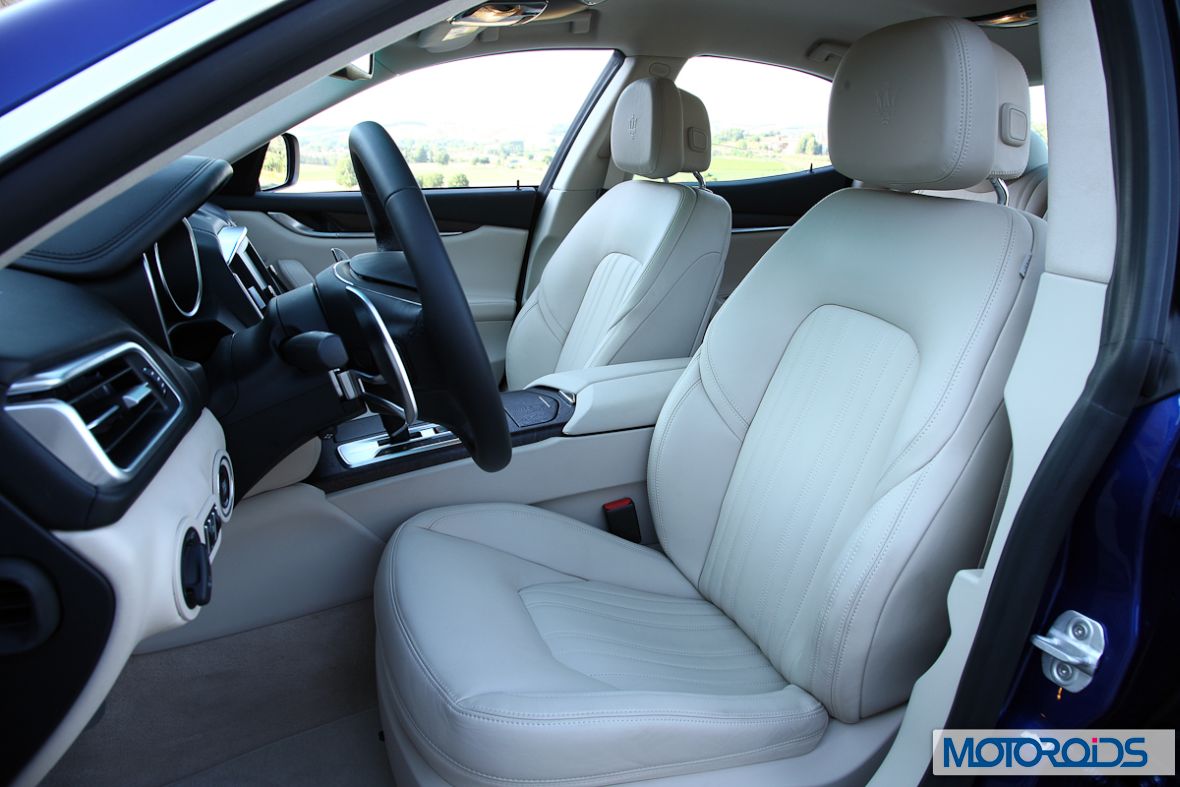 We can say that Ghibli is a Maserati like no other. It’s more to the ground and more affordable than any Maserati since the mighty – but unreliable – Biturbo of the 80s. Ghibli may not be the supercar it used to be in the 60s but still is a completely different breed next to its competitors. A touch of Italian class and racing spirit among premium, mainstream sedans! 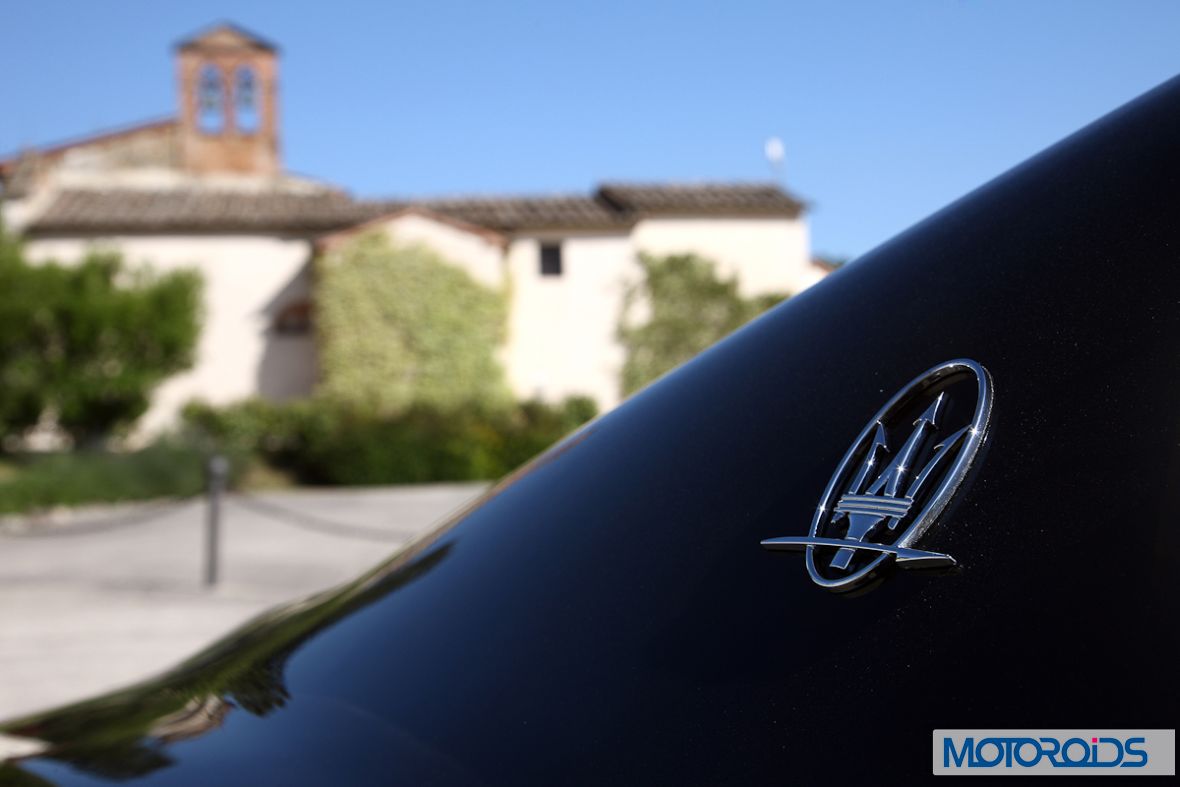