We spent some time with the new Maruti Suzuki Baleno RS, a self proclaimed hot hatch, on the Buddh International Circuit in Greater Noida.

RS, an acronym thrown around on flat-bottomed steering wheels and tail gates of many a ‘performance-oriented’ car, means Road Sport in Maruti’s case.

The Baleno RS was first showcased at the 2016 Auto Expo, and it lands up in production in pretty much the same form. 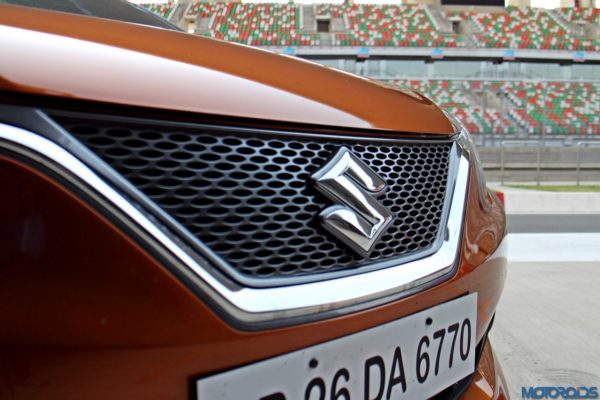 So you get side sills, a front splitter, a sportier rear bumper, a mesh grille and a RS badge. The interiors continue unchanged from the standard Baleno, with the exception of RS branded floor mats.

The looks don’t really shout out that this is a ‘performance-oriented’ vehicle. This is OK by me, given that this is no tire shredding monster that threatens to rip your arms off with torque steer. 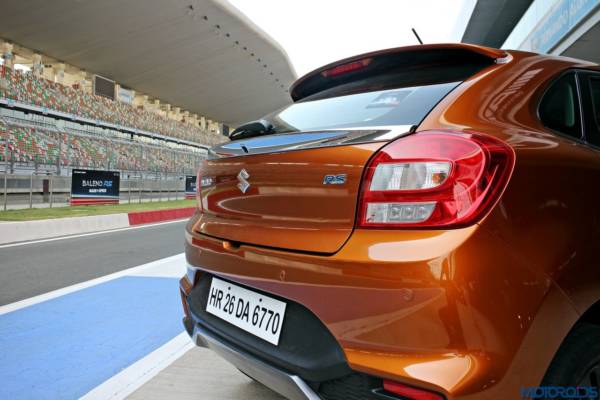 That’s around 10HP down from the car showcased at the Expo and the international-spec model with the same engine, and you can blame the low quality of Indian fuel for that.

The BoosterJet engine is a direct import from Suzuki’s Japan plant and adds to about 60kg to the Baleno’s overall weight, making the RS tip the scales at 950kg. The ground clearance stays the same (170 mm) as the standard Baleno.

The motor is very refined given that it just has three cylinders. There’s no lumpy idling or unwanted vibrations creeping in through the controls. It revs smooth, but it isn’t particularly eager to do so. 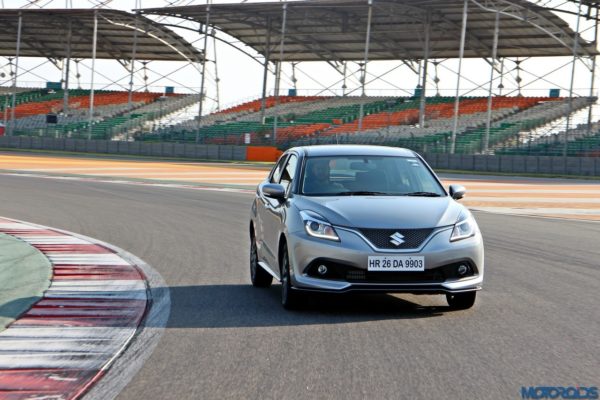 Performance isn’t adrenaline pumping, but adequately punchy for the road. I guess that was to be expected given that the RS’s Boosterjet makes just 10HP over the standard Baleno’s 1.2-litre NA mill, and is heavier as well.

There is turbo lag, yes, but it’s not really intrusive as far as the driving experience goes. Some lack of push can be felt below 3,000 revs, but push comes to shove after that, and the progression from lag to full-boost is not overwhelming. 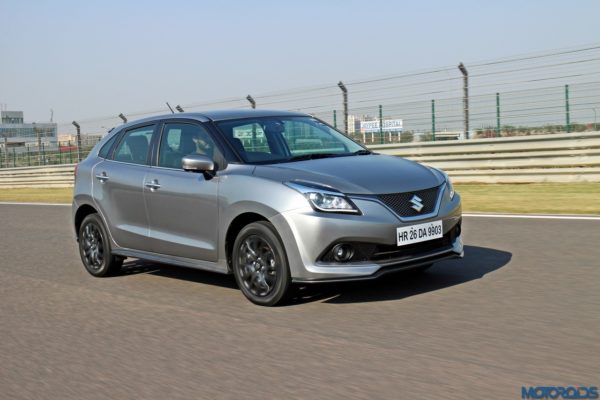 Flat out, the Baleno RS will hit 170 kph or thereabouts, and hit 160 kph in 4th gear itself, which is the tallest gear of the 5-speed transmission. Shifts are slick enough, but can feel a bit rubbery at times, as they don’t really ‘click’ into place.

The turbo whistles softly as it spools, a gentle reminder of the forced induction that the tiny BoosterJet mill is running.  Talking about the sound, the Baleno RS does sound quite good for a 3-pot mill – a muted, raspy note that is aurally pleasing. 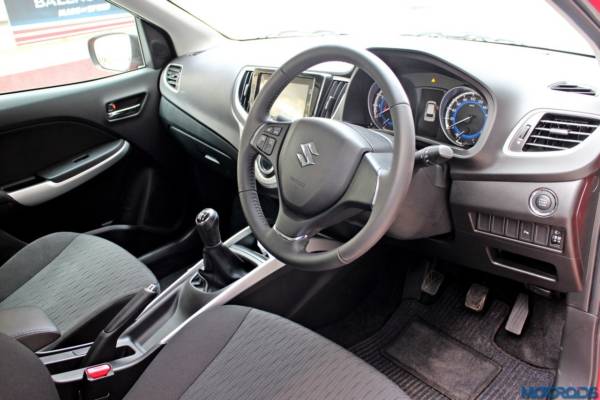 Maruti says they’ve tuned the suspension on the RS, but body roll is still quite pronounced for a ‘performance oriented’ car. And that’s what limits an otherwise playful chassis, which is doesn’t mind being pushed hard.

Steering feel is good, but not too honest. Neither is it bristling with feedback, like the Abarth Punto’s steering rack, nor is it completely lifeless. I’d put it somewhere between the Abarth’s feel rich unit and the Polo GT TSI’s somewhat numb unit. 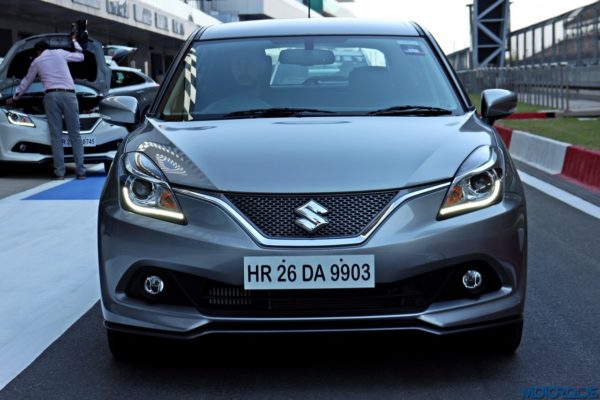 The steering rack is quite progressive, and weighs up satisfactory as the speeds go up. Turn in is good, and the Baleno RS reacts to fast direction changes with commendable body control (despite the body roll). Push it hard, and there’s predictable under steer that makes the car wash out.

As for braking, the Baleno RS comes with discs on all four corners, and they do a good job of shedding speeds. Under hard braking from speed though, the RS twitches and shimmies a bit. Tractability from the engine is great despite forced induction, and you’ll never catch the drive-train lugging in everyday high gear-low speed situations. 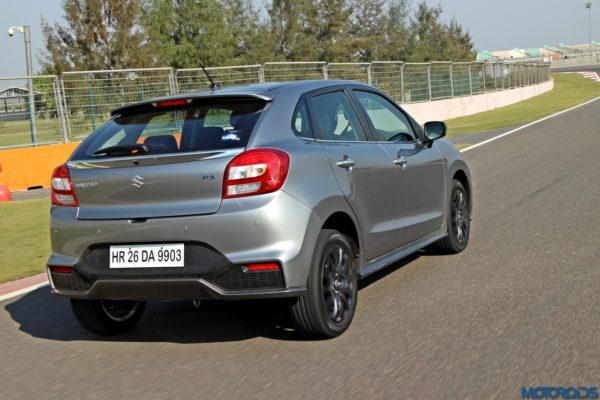 Safety-wise, twin airbags, ABS with EBD are standard. The Baleno RS is also compliant with front offset crash tests, side impact and pedestrian safety. The latter is a first for a Maruti and officials confirmed that the bonnet absorbs much of the crash impact, instead of passing it on to the pedestrian it has collided with.

The Baleno RS is a great package for the money – there are no two ways about it. But given its capabilities, marketing it as a hot hatch is asking too much from it. The performance is average when compared to competition, and the dynamics are a bit soft. 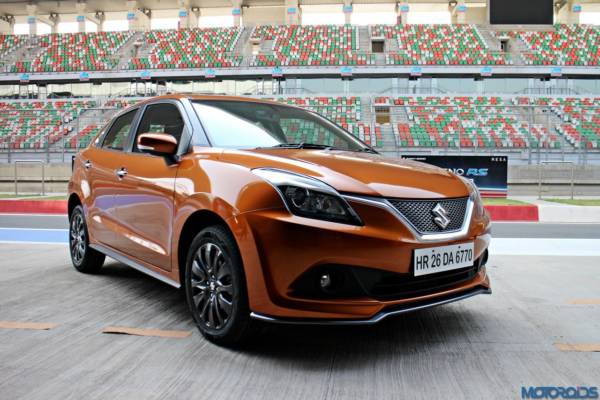 So there you have it – as a standalone Baleno variant (without the RS pizzazz) with a new engine, the Baleno RS ticks all the right boxes, and even some more given the peace of mind that Mauti ownership brings, but it’s not really a hot hatch. It’s a great hatch nonetheless.