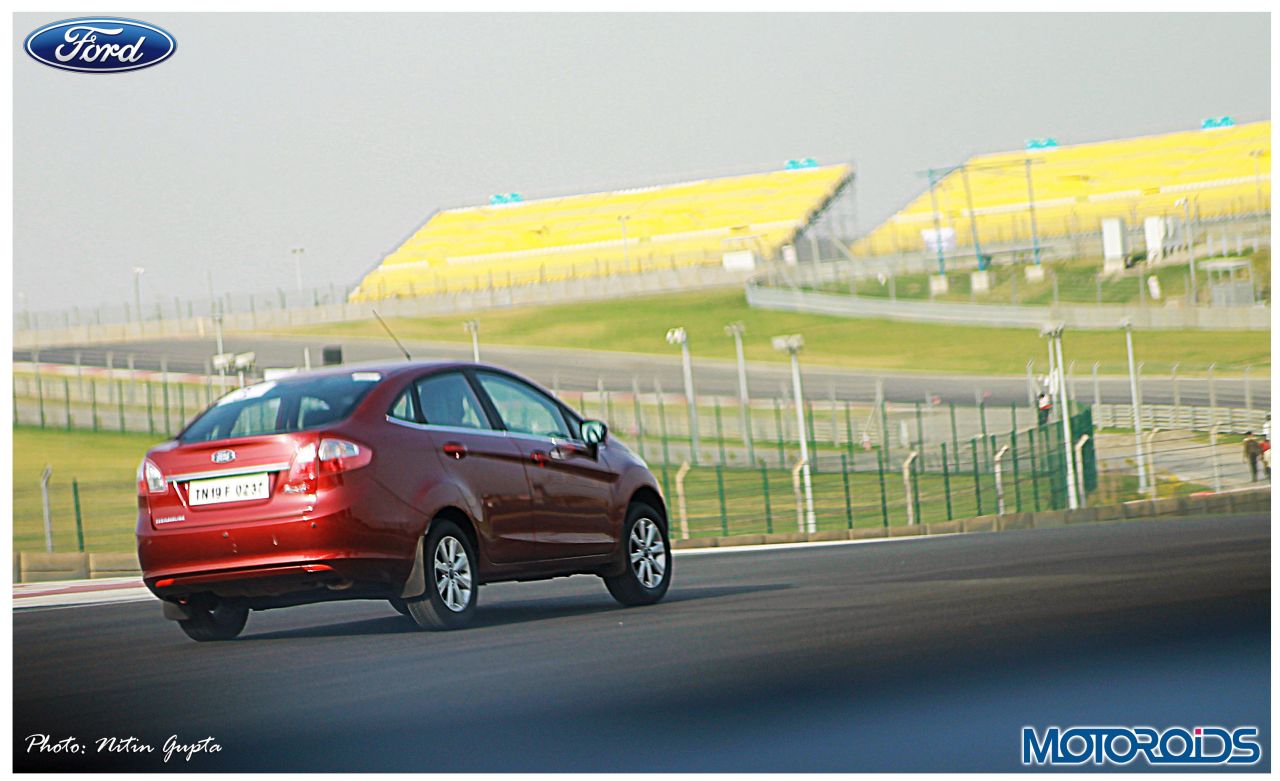 This was one of those occasions which you would put any bloody thing aside for. I have driven and ridden on racetracks several times before, but being someone whose sole dream in life is to be able to drive cars of his choice on a racetrack eternally, to attend this event was simply indispensable. Ford had lined up a few of its recently launched Fiesta Powershift dual clutch automatic cars at BIC, and that, to be frank, raised quite a few eyebrows. A mainstream automatic car at a racetrack? That doesn’t make much sense, does it? For we all know what a pain conventional automatics can be. On Ford’s part, the bold idea to take this sub 10 lakh automatic family sedan to an F1 racetrack, and hand it over to ever critical journos was a big statement. The whole event exudes Ford’s confidence in the superiority of their products. A family sedan on a racetrack, and an automatic at that? I would maul the very idea to death with my words if I know it’s one of those torque converter autos. You need to be extremely convinced about your product to take that sort of a risk for an auto manufacturer. 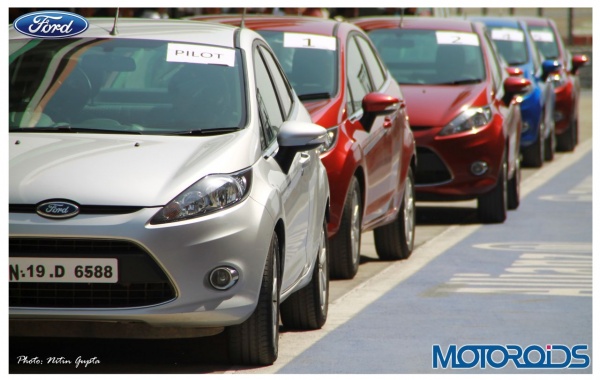 The event started with Ford India MD Michael Boneham talking about the salient features of the Fiesta Powershift. He reinstated his commitment to bring 8 all-new products to the Indian market by mid-2015, of which the Fiesta is the first, and the recently announced Ecosport crossover the second. His address to the media was followed by a presentation by Nigel Wark, Ford India’s marketing top boss. Nigel talked about the latest initiative Ford India has taken to increase its reach within India at an unprecedented pace. Recapping the unprecedented event of Ford opening 45 dealerships in a day, he underlined the importance of being present in Tier 2, 3 and 4 cities for any mainstream carmaker in India. Staying true to their latest ‘Go further’ promise to the Indian market he added that Ford will be opening 1 new dealership every 10 days in 2012. A presentation about the numerous advantages of the Fiesta Powershift over the conventional automatics followed. All these advantages will be listed down in detail in our next article. The presentation was immediately followed by a drive session around the racetrack. Christened the Fiesta Hotwheels drive, the proceedings left our hearts pounding with thrill and excitement, and had this big wide grin plastered across our faces at the end of it. And an automatic car managed to do that. We were, indeed, impressed! 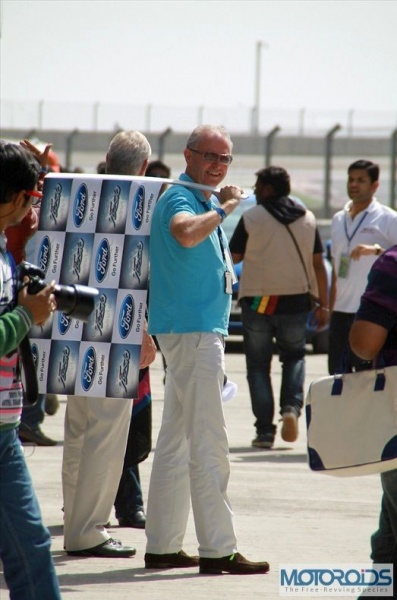 Michael Boneham, Ford India MD, before the Flag off. 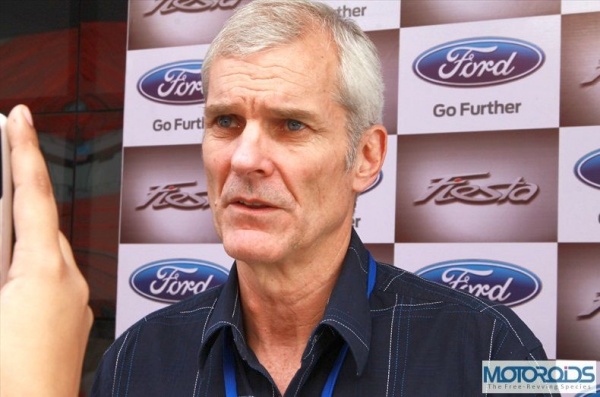 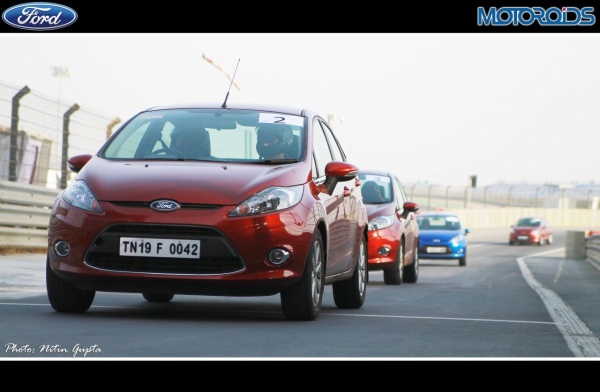 There is no doubting the fact that the Fiesta is the best handling car this side of Rs 10 lakh. However, adding an automatic to the equation may turn into a spoilsport as traditional auto transmissions and CVTs are fuel inefficient, slow shifting, unintelligent and extremely unfriendly to an enthusiastic driving style. The Fiesta Powershift, however, with its dual clutch auto transmission is claimed to manage shifts more quickly, more smoothly and without compromising on the fuel efficiency.

I put the car in ‘Drive’ mode as we were given a signal to move out of the pit lane, only for the first lap though, to understand how the transmission behaved in its ‘everyday’ mode. I would later shift into the L (Low) mode which allows the engine to rev all the way up to redline before shifting up. The first corner out of the pit lane is the first in a series of four slowest corners on the track, separated by some of the fastest sections. Interesting! While entering this corner on a flying lap, you have to brake late and hard, but as we were approaching the track from the pit lane (no flying laps), there wasn’t enough acceleration to warrant heavy braking. A light dab did the trick.

Plenty of width, no oncoming traffic, I was already going faster than I thought I was. Dangerous situation, that, on a track that you haven’t learned. You can reach extremely high speeds on a racetrack without even realizing the fact. It’s only when you begin braking that you’re embraced by reality, as you shoot wide off. A little caution would be good, I said to myself. 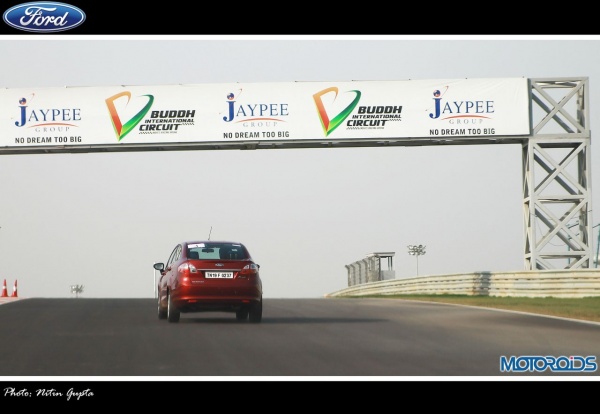 Right from the outset, I could feel even the taut body of the Fiesta rolling a wee bit in the extreme conditions at the track. You have to eventually come to terms with the fact that this car is meant for the road, and isn’t a track attack tool. A track car would break your back on the city streets, and the Fiesta, being a family sedan is meant to help you sail over such surfaces. Plus, having long been the best handling car in and below the C segment, it also has the added responsibility to thrill you more than any of its competitors. The Fiesta, to its credit impresses on both counts. The suspension of some other sedans in the segment would get squashed on one side with that sort of treatment. Not the Fiesta.

In Drive mode, as I observe, with aggressive throttle inputs, the rev needle holds on for a longer period, but doesn’t quite hold all the way to redline. It’s the L mode that really makes the Fiesta truly track worthy.

Turn 1 is followed by a sweeping left hand curve, which raises the elevation and culminates into a U turn, the slowest corner of the track. There is enough width here, so if you want to have some fun, you can turn in a little early, let the tail swing out that wee bit, and power out of the curve.  The slowest corner leads you into the fastest section of the track, a 1.25km straight with deviation in altitude. The Fiesta managed to show a maximum speed of around 170km/h here. As we put pedal to metal on this straight, the quickness of the Powershift transmission’s up shifts made itself evident. 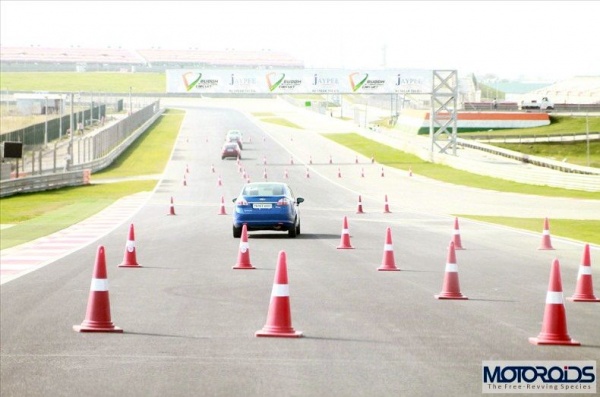 This straight, the longest on the Buddh circuit ends into a tight, yet yummy, descending curve. With the slope inducing ample momentum into the car as you accelerate again after braking, you don’t have to do much to let the car’s behind swing out, tugging the insides of your tummy in the process. This corner has to be one of the simplest ways in the world to feel like god. The feedback from the Steering is not as good as the earlier 1.6 Fiesta, thanks to the new EPAS, still good enough to cut the possibility of too many input corrections. By experience, I know that it’s easy to lose control on such sections, where a lot of the car’s body weight is shifted to one side for a prolonged period. A squishy suspension and an unbalanced body would throw the whole contraption into a serpentine trajectory. Not the Fiesta, which is incredibly well balanced for an everyday car and calls for you to do something really stupid to throw it off balance. It’s a child’s play to get those tyres screeching. As regards the transmission, I wish the downshifts were a little more violent in such conditions. Having driven the Mercedes’ AMG line of cars recently, I guess I am asking for a little too much. Being greedy aside, by no measure did the Powershift disappoint me, and at no point did I feel a lack of power, or get trapped in a higher gear at low speeds with no power at hand.  For the kind of money the Powershift is offered, it’s incredibly good around the racetrack, especially in the unrelenting L mode. 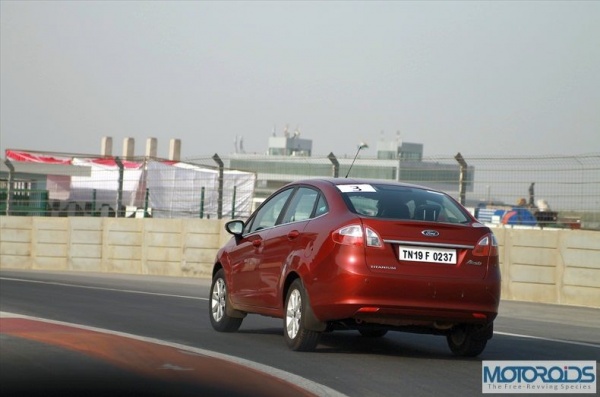 This corner marks the end of sector 1. Sector 2 is an assortment of five quick turns forming a slalom pattern that requires some real technique and driving precision. Our entry into Sector 2 was preceded by a special slalom course designed by Ford to let us experience the Creep Forward function of the car. In bumper to bumper traffic conditions, you would require alternating between the brake and accelerator pedal of a normal automatic, but that’s not the case with the Fiesta. Just lift your foot off the brake, and the Fiesta will crawl forward. The closely positioned cones on the Slalom course made us appreciate the convenience the Fiesta would provide in slow moving traffic conditions. Just release the brakes, and the Fiesta went meandering around the closely spaced cones without breaking a sweat. Those who have a back problem, and know how taxing it could be to modulate the clutch pedal in slow moving traffic conditions would acknowledge what a boon that feature is! 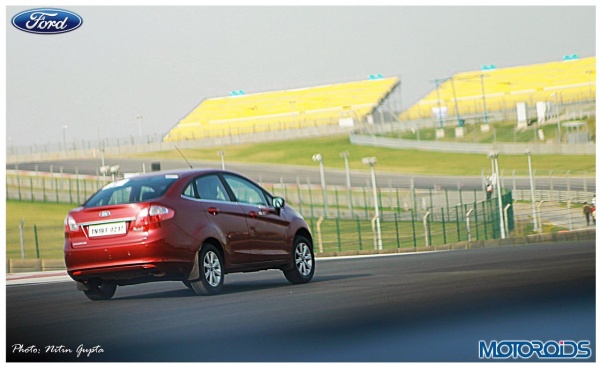 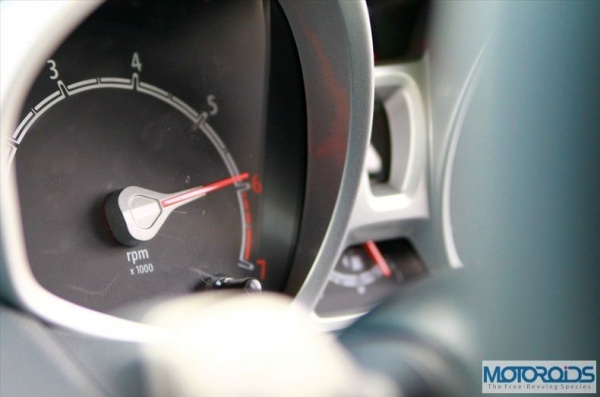 Sector two welcomes you with some fast corners in swift succession. Quick direction changes mean that the car gets loaded to opposite sides frequently. The Fiesta is perfectly composed. You can see the cars ahead of you swinging their load from one flank to another but never looking perturbed. It’s a technical section which requires you to be cautious, the slightest bit of overconfidence can make you go off the track. These quick, opposite turns lead you at an inclining angle into a long circular loop with several apexes. You have to be wary of your line here, going too much inside, or getting out too wide can make you overhaul your line, or even make you run off.
This section on, into Sector 3, the ride it even more fun. Long, sweeping corners with elevation changes allow you to carry a lot of speed in, put the car into mini drifts of sorts and make those tyres screech out loud. Many a fellow journos, just like yours truly were seen making the cars break traction and let it drift mildly with the tyres wailing for relent. Unfortunately we had to slow down to enter the pits after every lap, but each time we finished this section, we had the widest grins on our faces. A day’s drive on a racetrack can be more fun than years on a road in a car.  Our beaming faces were testimony to the fact that the Fiesta automatic is indeed great fun to drive around even a high speed F1 racetrack. I think if that doesn’t substantiate what Ford were out to prove, I wonder what does.

With the Fiesta Powershift, Ford have managed to raise the bar substantially in the sub-15 lakh rupee segment. All automatics would feel boring and lethargic unless they’re outfitted with something that could match this gem. The Powershift is indeed an automatic that thrills. It isn’t quite a blitzkrieg that a DSG could be, but it’s fast and fluid enough to keep you engaged, without compromising on vital criteria such as fuel efficiency and economic viability. It’s a revolutionary technology for affordable, mainstream cars, in its own right.