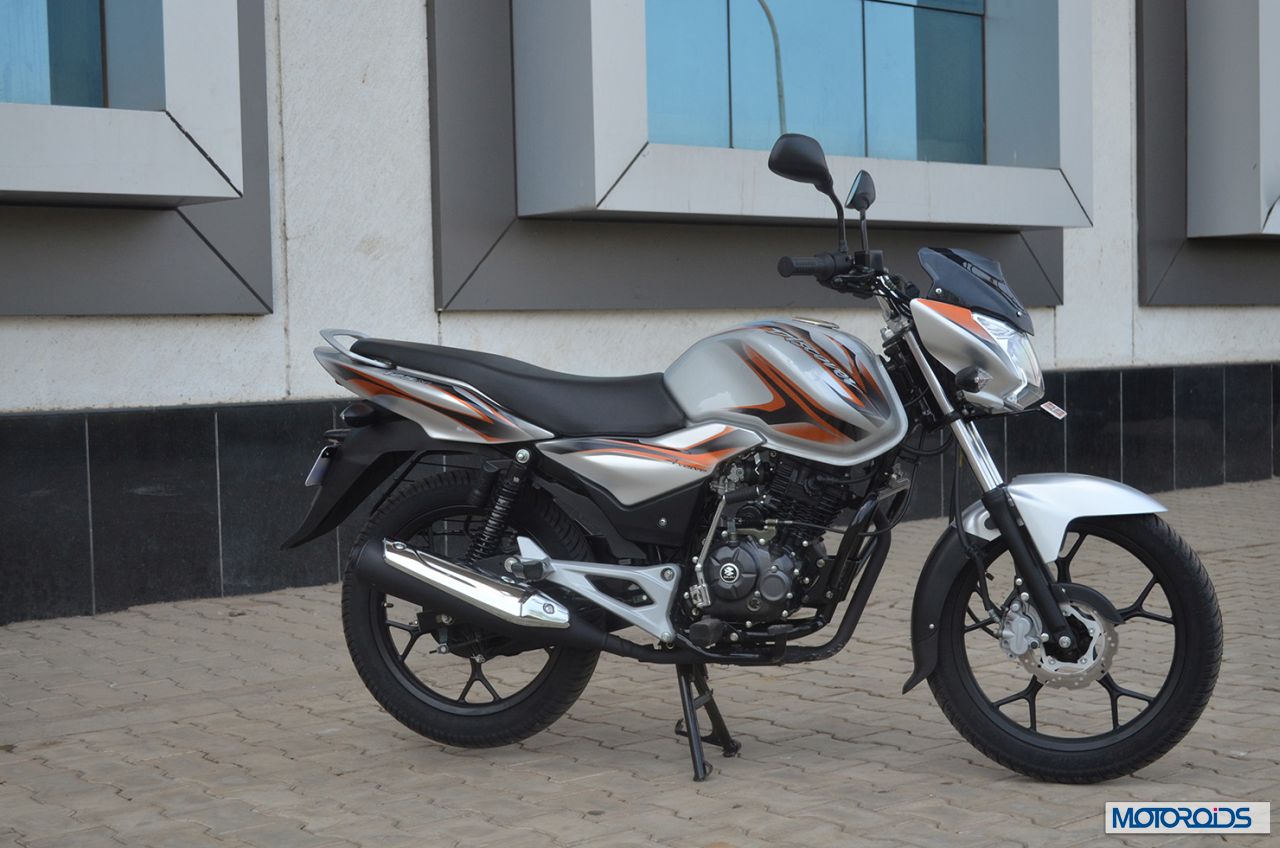 The Bajaj Discover 125M is yet another piece in the Discover Ensemble. So does the new addition bring something new to the performance, or it’s the same choir with no new notes? We find out.

There’s a theory that asteroids were responsible for wiping out dinosaurs and mammoths from the surface of the planet. The other, much more widely accepted theory is that evolution simply happened, our good old friends couldn’t keep up, and so they simply faded away. In doing so, they made way for new species, new breeds that were genetically engineered to cope with the times better. Which, in those times, meant fending off challenges from other unsavory characters using whatever means necessary.

That was then. But the strategies and the rules of competition and survival remain pretty much the same, be it the Jurassic Period or the boardrooms of a 21st century two-wheeler juggernaut. You evolve, you adapt, and you develop new powers and abilities that give you an edge over your peers. Be complacent, and you invariably run the risk of being sidelined, doomed to extinction. 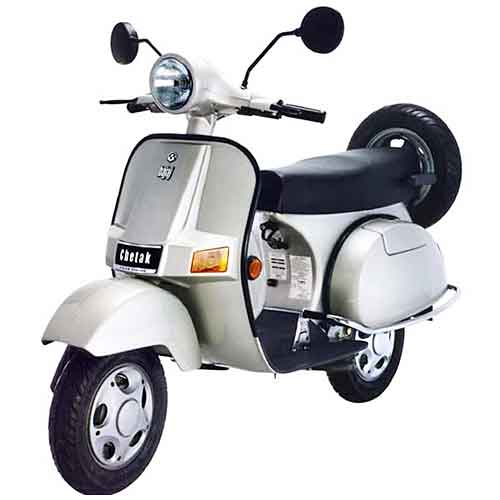 Bajaj Auto have learnt this the hard way, and they haven’t forgotten their first lessons. More than two decades ago, the Pune-based conglomerate had just one mainstay in the Indian two-wheeler market: scooters. The Chetak was a ubiquitous name, and Bajaj was doing rather well for itself. Until they had the rug pulled out from under their feet with the advent of motorcycles. But the company instead taking the adverse time lying down, set about to carefully studying what has changed, and then develop a product that would supersede whatever else came before it.

The end result – results rather, because there were two Pulsars, 150 and 180 – completely decimated the competition and set a new benchmark for Indian motorcycling. Indian bikers, deprived of true blue affordable performance all this while, lapped up the Pulsar like it was the proverbial hot cake, and what followed was success that’s now used as case studies in business schools. The more Pulsars they built, the more bikers lapped them up.

Building it up as a brand, the company then introduced the Pulsar in different guises and with different engines, thus ensuring that every performance fan had one that suited his price bracket just fine. 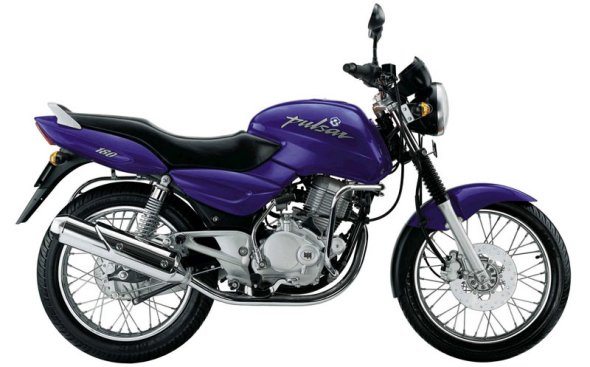 The next step was to take it further, and thus came the birth of the Discover. Meant to serve as the younger sibling to the Pulsar big brother, the Discover catered to the exec-commuter class, the typical 9-to-5 office-goer who demanded something that had just the right mix of grunt, efficiency, and style. Buoyed by the success of the Pulsar, the Discover 125 evolved into its own with time, and Bajaj kept refining it, honing it away, to make it better.

There were various cosmetic and visual upgrades, and an equal number of upgrades in the engines department. Bajaj weren’t even afraid to let the Discover step into Pulsar territory at one point, with the 150cc iteration. They let it overlap with the Boxer as well, with the Discover 100. 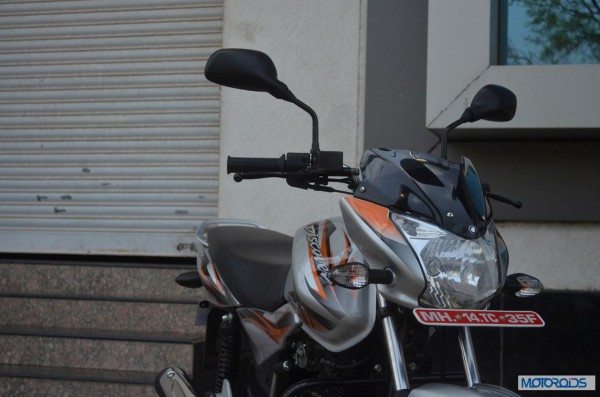 What we have here today is something on those similar lines, a modest revision of a best-selling bike, aimed at the lower end of the Discover spectrum. The name is Discover M, and, if you’ve been paying attention to the recent Bajaj nomenclature, you’ll have already figured it out that this is the base variant of the 125cc-engined Disco, slotting under the T (mid) and the flagship ST.
Coupled with the three 100cc-engined Discover variants currently available, the 125M effectively plugs in any gap in the Discover line-up, if there was one. While the 125ST is aimed at buyers who want a modicum of performance and oomph with a fuel-efficient mill, the 125M will cater to those who are looking for that extra edge over the Discover 100ST. 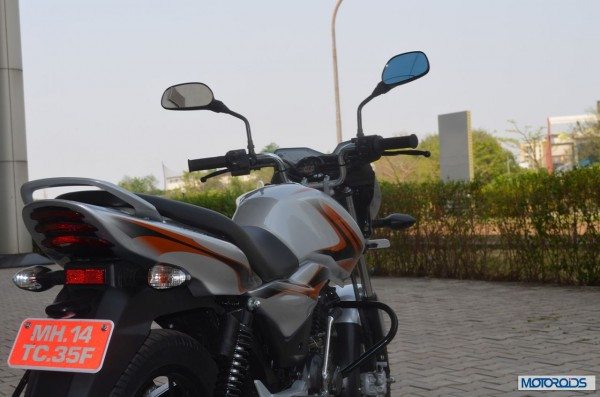 Visually, there hasn’t been much change to the 125M, and it looks strikingly similar to the ST, which could be a good thing for the former. Save for the customary badging on the tailpiece, there is little to differentiate the six Discover motorcycles on sale right now. The plastic body panel covering the battery and air box is now done up in body colour, while it was a dark grey colour on the T and silver on the ST. Speaking of colours, the 125M will be available in two new colours – Platinum Silver (Black Ice Blue), and Platinum Silver (Black Gold) – in addition to the existing ones. Starting with the second generation, the Discover had always had one of the best stickering jobs in the country and that’s still the case here. The decals on the gorgeously sculpted fuel tank and the body panels look beautiful, especially in the new Black Ice Blue colours. 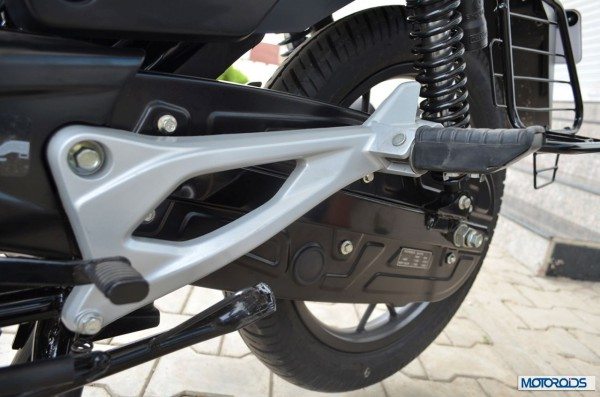 The tyre hugger has been removed, presumably to keep costs down, and the exposed chain on the ST has been swapped in favour of a full chain cover. Rounding up this small list of visual differences is the barely noticeable change in colour of the exhaust can and the metallic fuel cock. Bajaj has retained the snazzy spider alloy wheels from the ST, and they still look great, although we still miss a tachometer or an engine kill switch. 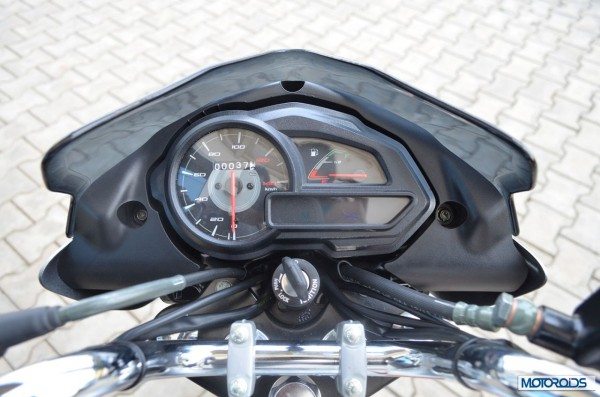 The rest of the instrumentation is the same as before, a stylish speedometer and fuel level indicator with tell-tale lights. We really wish the speedo needle did that ECU-check type sweep on startup though. Thankfully, the 125M comes with the DC headlamp that also does illumination duties in the 125ST and 125T. 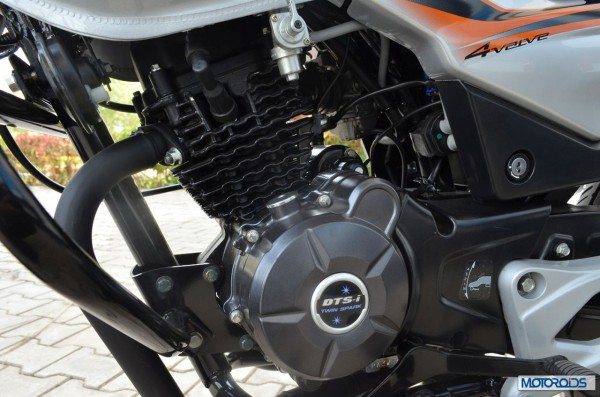 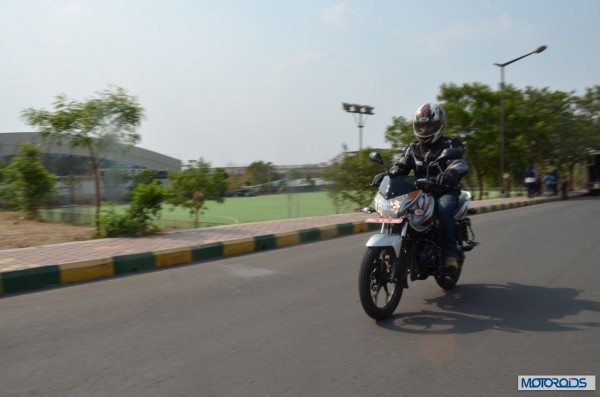 On the move it is hard to feel the loss in power, unless you’ve had a look at the spec sheet beforehand. That’s a small achievement in itself. With the power and torque now made more accessible and flowing in earlier, the Discover is still a brisk performer most of the time. Thanks to a perfectly slotted four-speed transmission and the improved low-end torque she pulls away with alacrity from barely idling revs in every gear. Keep twisting the throttle and she responds smoothly, before losing steam at the very top-end. 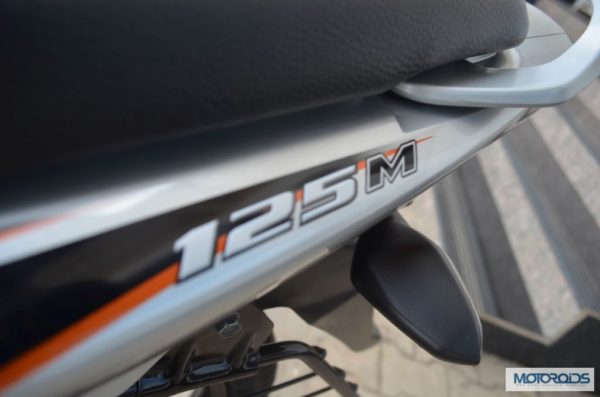 Compared to the excellent low and mid-range, the 125M’s top-end felt a little lackluster, but not so much that it would bother most users on their daily commutes. With two of us onboard, it managed to hit a speedo-indicated speed of 95kmph before traffic slowed us down, so crossing the centurymark shouldn’t be a problem given the right stretch of road. Gear changes are smooth with each gear falling into place with a satisfying snick and we encountered no false neutrals on our test. We still wish that Bajaj would shift to the universal one down-rest up gearshift pattern for the Discover line-up though. 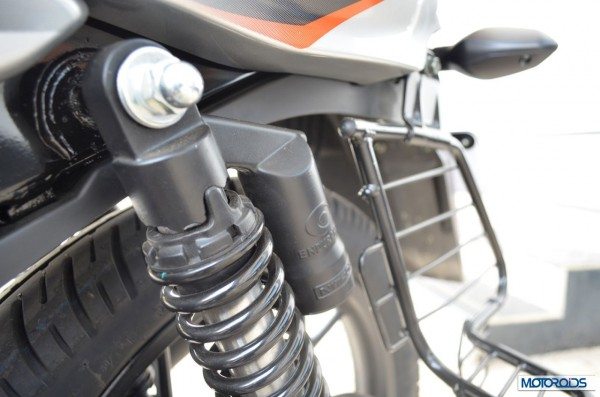 Bajaj has retained the telescopic forks upfront and the Nitrox gas charged twin shock absorbers at the rear from the 125ST, but the wheelbase has been brought down to 1255mm from the original 1305mm. They say that the aim was to make the 125M more agile and handle better in the corners. During our time with the bike, we put that to the test by pushing it pretty hard through a set of empty corners, and the Discover didn’t disappoint. 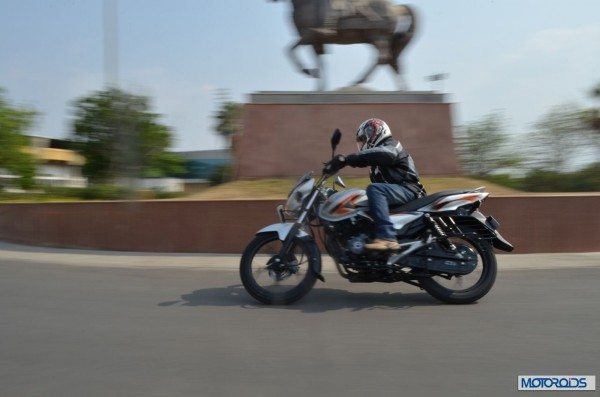 The Discover has always been one of the better handling 125s out there and the new one, while not being a radical game-changer, definitely inspires as much confidence as its pricier siblings, if not more. She still turns in without any effort and quick position changes mid-corner didn’t upset her stability despite the decreased wheelbase. Not something that would make a difference to most buyers but it is still heartening to see that Bajaj Auto is paying attention to the smaller details too.

Ride quality is in the same ballpark. At city speeds, she soaks up the bumps and undulations of Indian roads, with aplomb. But turn up the wick a notch, and the suspension gets a bit too firm for comfort, especially at the rear. It isn’t that firm that one would be complaining at the end of a long ride, just firm enough to give it a hint of character and an almost imperceptible nod to its sporty lineage. 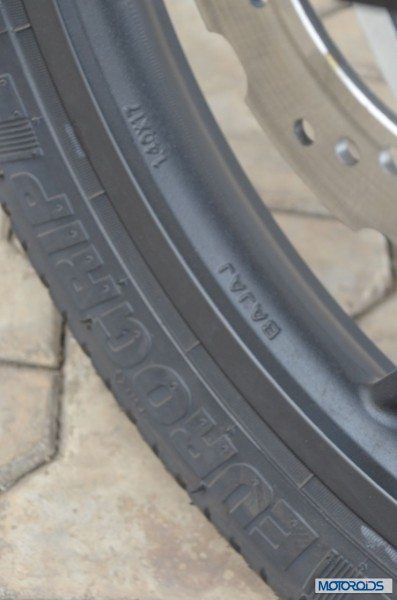 Sportiness isn’t something one would associate with the 125M’s tyres though. The 2.75×17 upfront and 3.00×17 TVS Eurogrip tyres at the rear are what is the norm and they get the job done all right. Engineered to provide the best of both worlds, be it the torrential Indian monsoon or dusty rural roads, the tyres have a tread pattern to dispel rainwater, providing it the best grip in any condition. Although de rigeur in the 125cc segment, these aren’t the best handling tyres out there but still inspires enough confidence to push the bike as hard as that responsive chassis would allow. They do exhibit a tendency to squeal under hard breaking and my colleague had a gala time jabbing the brakes hard at every traffic signal, just for the heck of it. 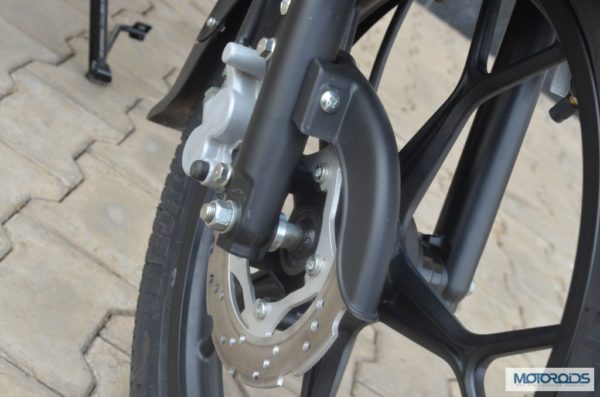 Braking is an aspect of the 125M where we came away with mixed feelings from our test ride. Our test unit came with the optional petal disc brake upfront and the customary drums at the rear. The front disc is a definite step-up from drum units but we still felt that it lacked sharpness and that sense of urgency at higher speeds. Bajaj says they have deliberately kept it so, keeping in mind first-time users who might just lock up the front unintentionally during panic braking. We were also told that the front disc brake cover is more than just cosmetic, it really does serve a utilitarian purpose, staving off dust and mud and prolonging the life of the rotors.

Fuel efficiency is probably the most important bit about a bike in this segment, it could well be its make or break factor. Since this was a launch event, we didn’t have the time to strap on our test apparatus and measure the 125M’s efficiency for our own, but it is understood that the bike will be more efficient than its more powerful brethren. Bajaj claims an on-road figure of 60-65kmpl, which is significantly higher than the 50-55 kmpl figure of its peers and even the 55-60 kmpl of the 125ST and 125T. That surely sounds doable.

We asked Bajaj if there are too many iterations of the Discover brand on the market right now, and their response was that each and every model serves a specific purpose.
Conclusion

In the case of the 125M, what buyers get is a tried and tested exec-commuter that marries the best of both worlds. It borrows heavily from both above and below, does away with frills and fancies, and is aimed squarely at the economy-conscious commuter who wants to step up from a 100cc but isn’t yet ready to go full 125 yet. The overall package is decent, without breaking any new ground, and it will no doubt try to emulate the success of the rest of the line-up. Which shouldn’t be so hard as the Bajaj Discover 125M makes a pretty strong case for itself as a value-for-money proposition.
specialist