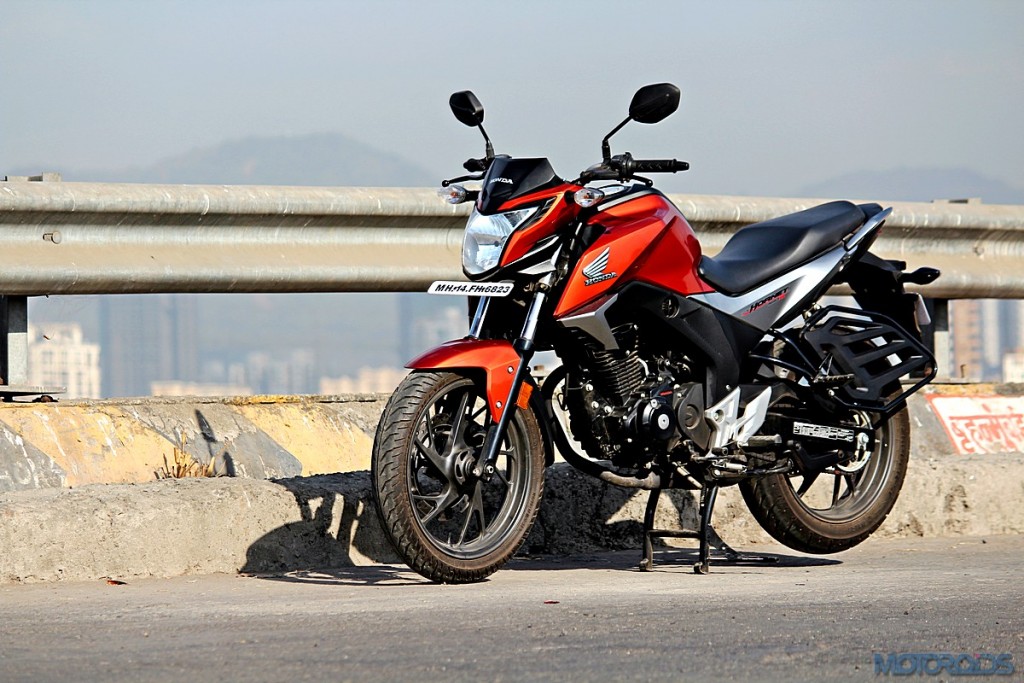 Being the self proclaimed car guy of the pack, it’s been a while since I rode a decent motorcycle. Gnawing hard at the last tethers of my 110 cc commuter’s performance while riding to work has been my only two-wheeled escapade for the last couple of months. I was yearning for some proper chest in the wind experience, so when the new Honda CB Hornet 160 premium commuter came by, I gave half a smirk and took off to the hills. Maybe the other half is still reserved for something more rapid.

The name’s a mouthful, so I’m just going to address it as the Hornet for the rest of the review. 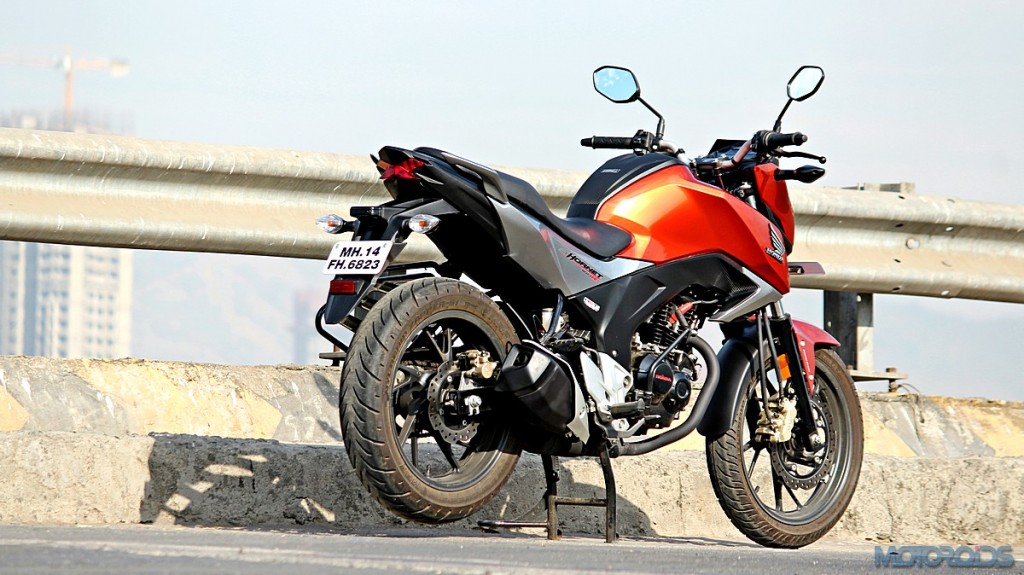 The new Hornet builds on the CB Unicorn 160’s heartless, functional demeanor and gives it some extra soul, both mechanically and stylistically. While the Unicorn’s 162.7cc, single cylinder engine has been tweaked to deliver slightly more shove, sincere visits to the gym have also resulted in more muscular physique. 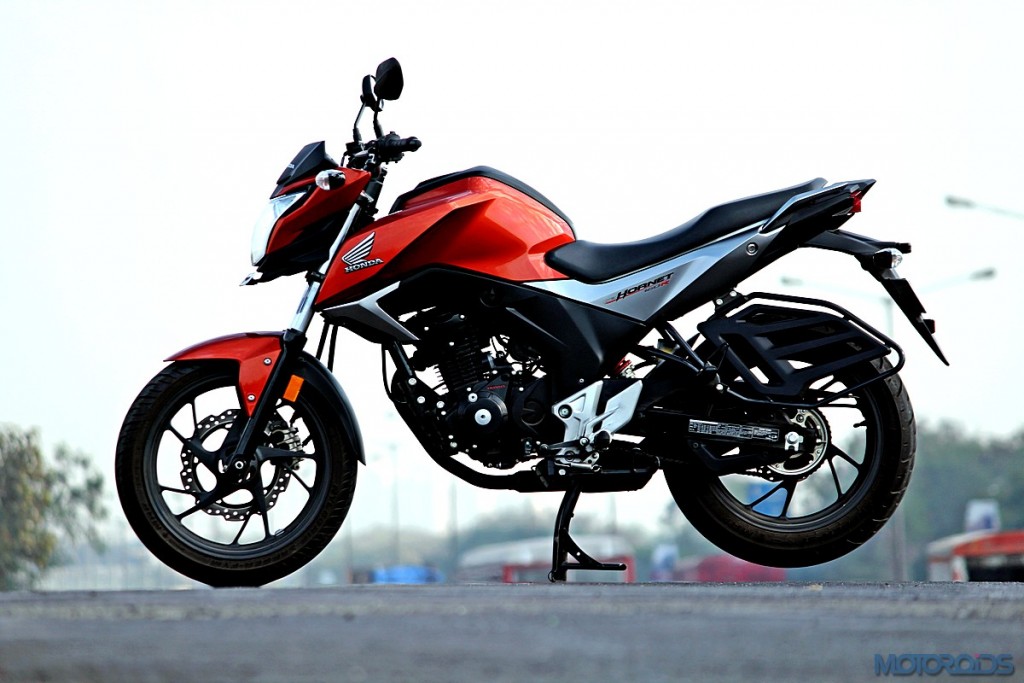 In spite of the Hornet bearing more than a passing resemblance to the Unicorn, not a single body panel is shared between the two. Which is a good thing, since the Unicorn never caught fleeting glances from PYTs on the road with its appearance.  Not that the Hornet beguiles the fairer sex, but take a long, hard stare and there’s enough to confirm that the Hornet took a walk on the wild side. 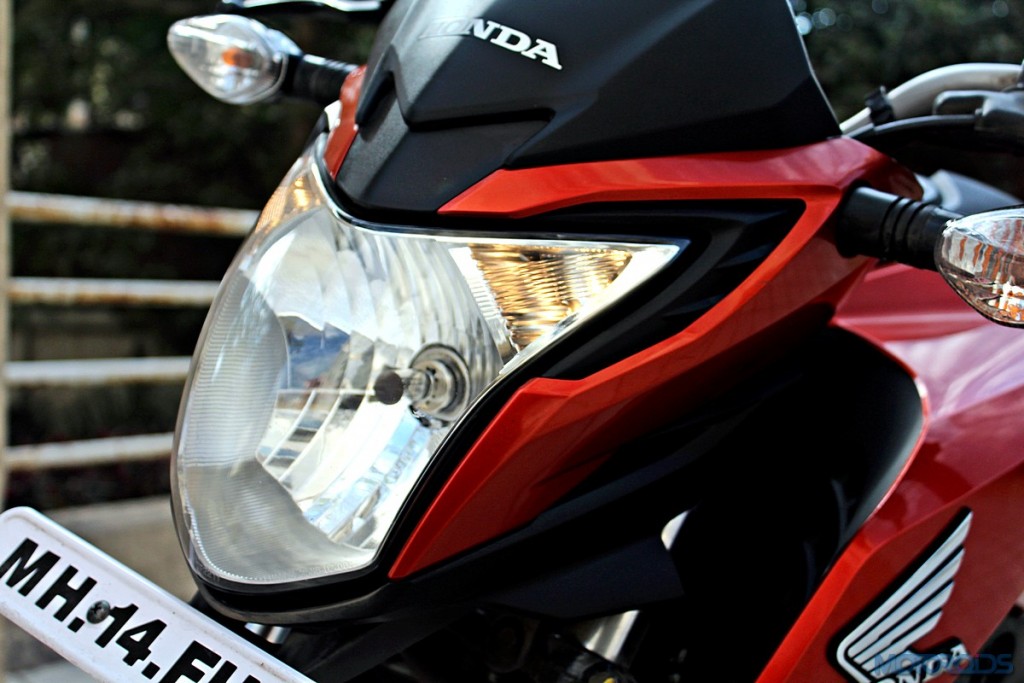 The bikini fairing is built around a headlamp which would have been the Unicorn’s illumination set’s doppelganger, but isn’t. The Hornet’s headlamp cluster, still tapering downward and hosting a couple of pilot lamps, is ever so slightly different. The fairing looks skirmish ready, with its subtle winglets, crevices and ribs; all of the aggression cloaked in contrasting black, and only coming under the spotlight when viewed hard. 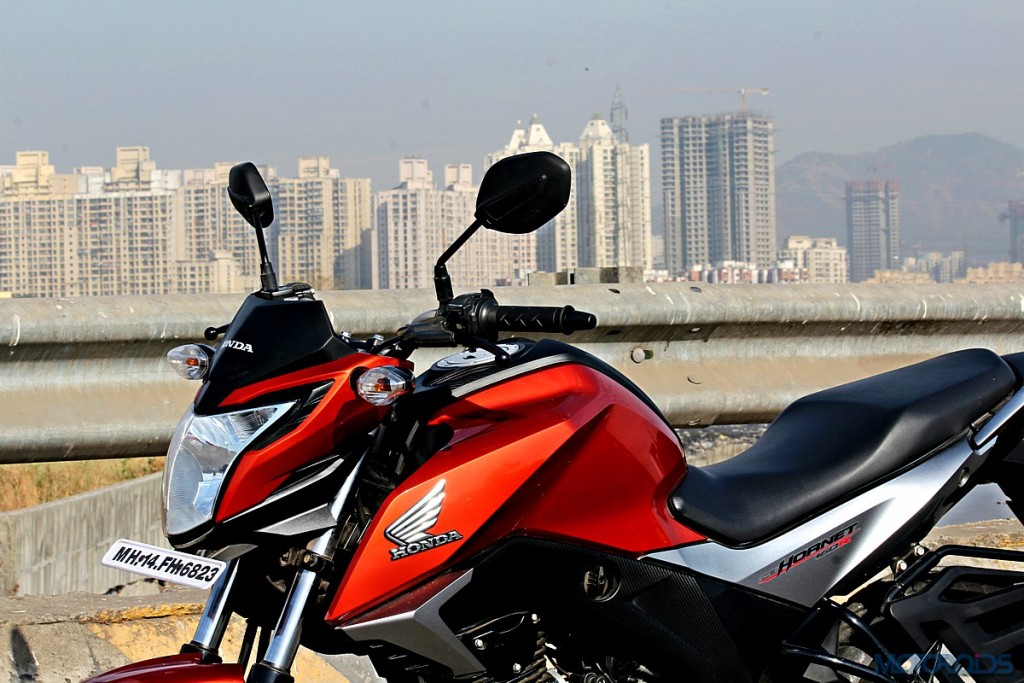 The tank extensions are a work of art. Now, these are not your run-of-the-mill extensions that are molded in plastic and glued to the metal tank by some under-paid, bored worker on the production line. The extensions are a part of the tank itself and are chiseled with such flair that’d make the modern day Michaelangelo proud. The sharp extensions, highlighted with a dull silver finished, T-shaped piece of trim below, create a strong contrast with the new, muscular fuel tank, all of 12 litres. Honda’s 3-D effect winged logo adds to the small drama unfolding between above your knees. 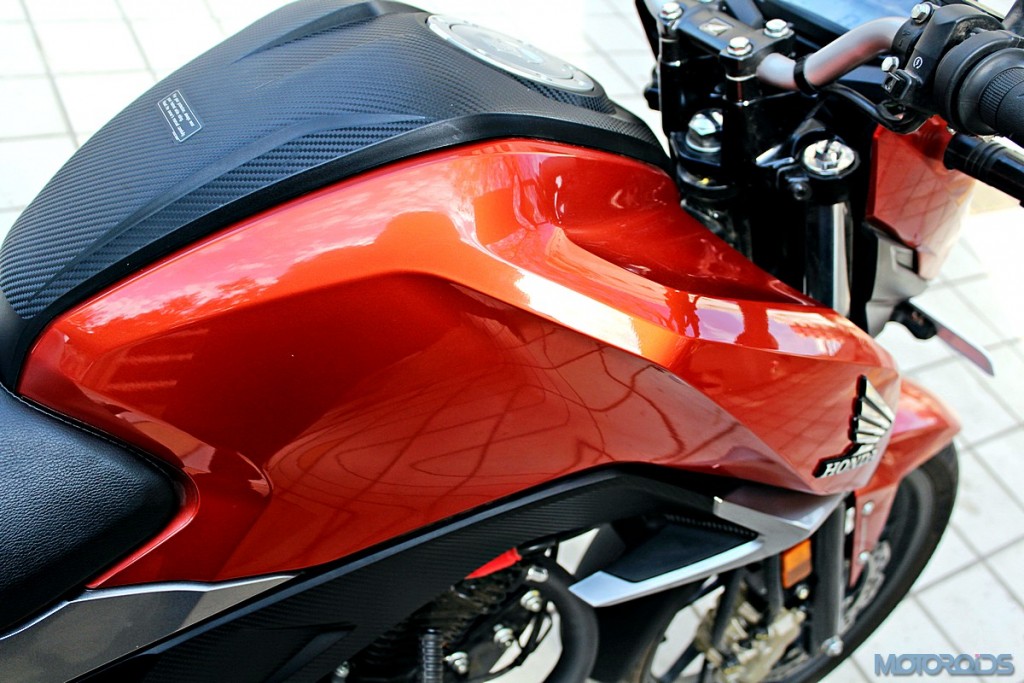 Running above the tank is a faux carbon fiber finished shroud which hosts the aircraft styled fuel filler cap. Similar finish can be found on the portion below the tank, which encompasses the integrated fuel cock and then falls down to meet the rider’s foot pegs. While I’m not a fan of finishes that emulate other exotic stuff, the Hornet somewhat pulls it off. 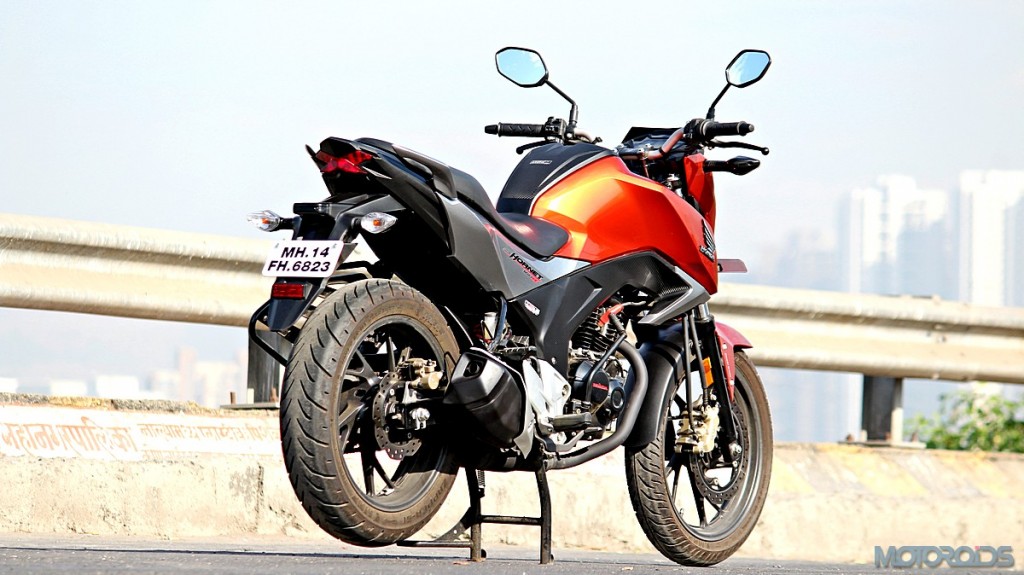 The design blurs the line between a motorcycle’s conventional side panels and rear section. Instead, the carbon fiber finished portion suddenly gives way to a contrasting, dull silver finished middle section, which gracefully flows into a blacked out rear section.  While the middle section hosts the Hornet branding, the darkened rear portion plays host to the striking, X-shaped tail lamp. The 140 mm wide rear tire adds to muscular, well-toned theme.

The exhaust is a far cry from the Unicorn’s pipe, and is a stubby, aggressively styled unit that does look the part. The saddle itself is a well designed single piece unit, but can account for a slightly sore bottom if you’re spending more than a couple of hours on it. Pillion grab-rails are alloy made on the Hornet 160R, and are smartly chiseled to gel with the overall design. 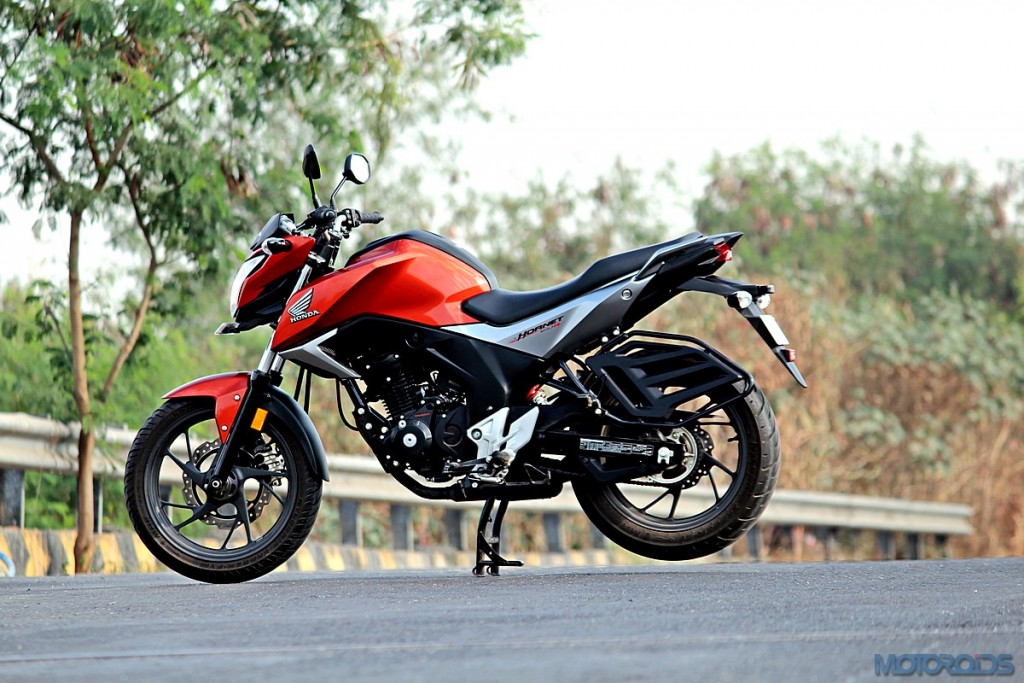 Meanwhile, there are a lot of carefully honed lines, contours and other little details that paint the Hornet’s entire styling canvas, which add up to make the Hornet  the most well designed motorcycle in its segment. Even the slightly less important bits like the foot peg surrounds and the saree guard are designed cohesively, and do not appear to be afterthoughts. The overall styling is crisp, contemporary, while superbly balancing out aggression and restraint. The levels of fit and finish are right up there with the best of the lot, except the switchgear quality.

Swing a leg and the riding stance is a trifle hunkered down, rather than commuter centric. The pegs are slightly rear set, while the handlebar is noticeably flatter than the Unicorn’s. The slim handlebar grips, shared with the Unicorn, are made of soft rubber and feel nice to hold. The switchgear however, cannot get any worse. Ugly shreds of plastic jab your fingertips, without Honda realizing that motorcycles two segments below offer better quality switchgear. The full digital instrument cluster is carried over from the Unicorn, and does a crisp job of projecting information. 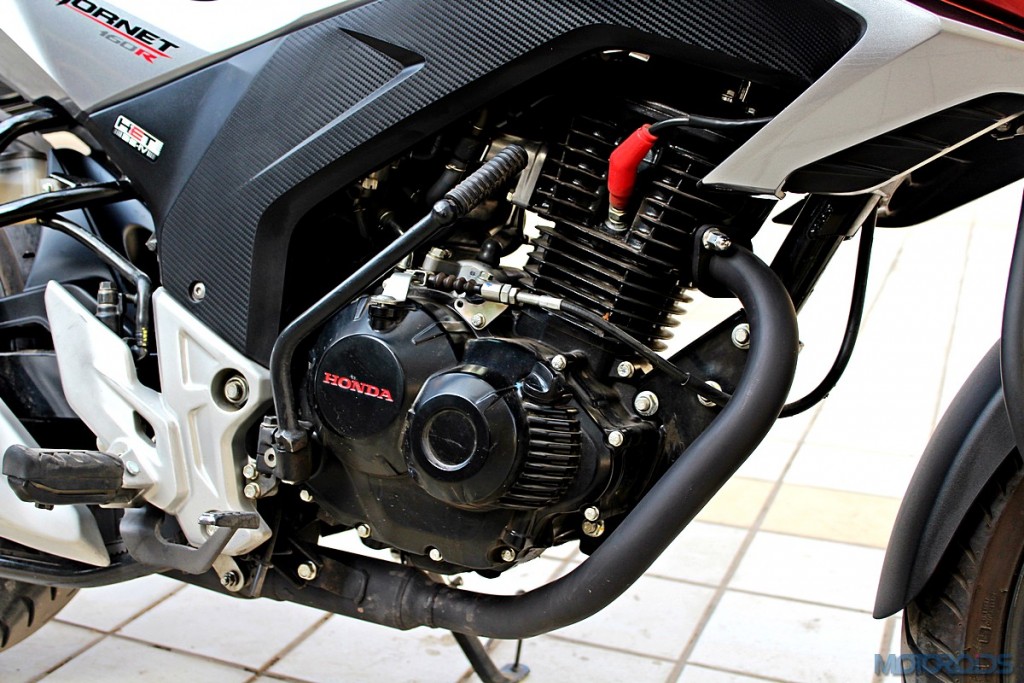 Anyhow, thumb the pointy starter and the Unicorn’s massaged motor settles into a steady, 800 rpm thrum, which rises to 1,000 rpm when the motor has warmed up after a run or two. Displacing 162.71cc, the air-cooled, four-stroke, single cylinder engine now produces 15.7bhp at 8,500rpm and 1.5kgm of torque at 6,500rpm; up from the Unicorn’s 14.5 bhp and 14.61 Nm outputs. The motor has a nice ring to it; neither too gruff, nor too mellow. 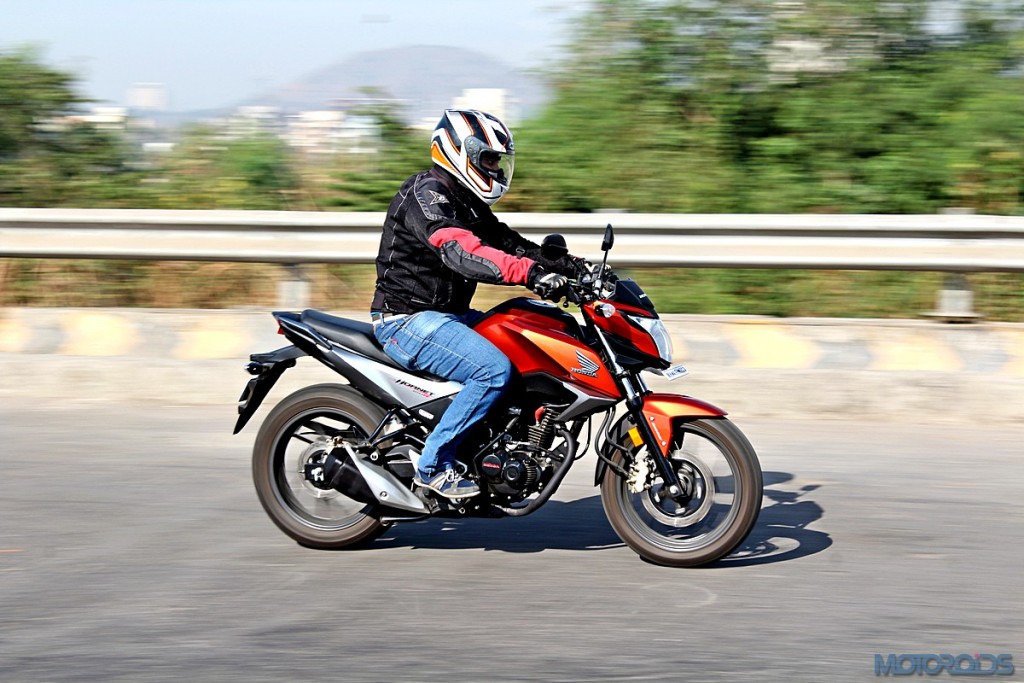 Clutch action is sweet, and so is the performance. Given the specifications and the 142 kg kerb weight, there is a satisfying surge with respect to throttle inputs. It does feel peppier than the Unicorn, although not by much. Power comes in thick and nice, giving the Hornet ample amounts for performance to decimate urban crawls. However, to make the most of it, one needs to dial in a fair amount of throttle. Low end response is slightly lethargic, but mid range is creamy. The Suzuki Gixxer 155 might just have a little edge here. 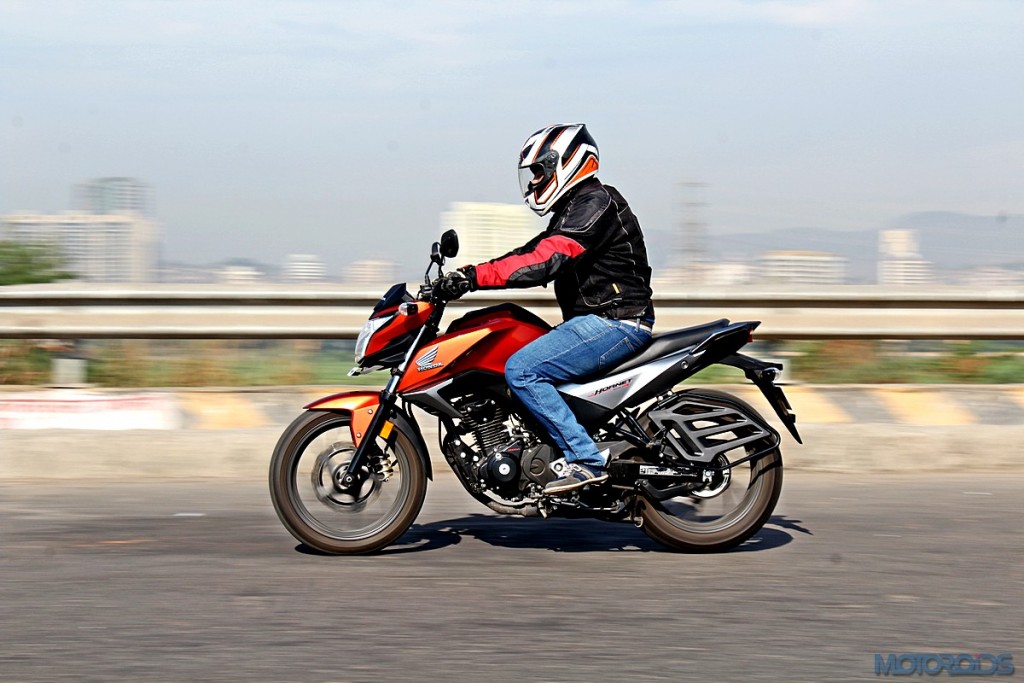 Again, there isn’t much top end whack, and even in the further reaches of its power band; near bouts 10,000 clicks, the Hornet struggles to nudge the 110 kmph mark. The motorcycle is comfortable cruising at 80-85 km/h in top gear, but asking for more is stressing the motor. That said, the meat of the power band, which lies somewhere between 4,000 – 6,500 rpm is very enjoyable to poke. The 5-speed gearbox is a joy to operate most of the time, but can get clunky in the lower gears, especially when cold. 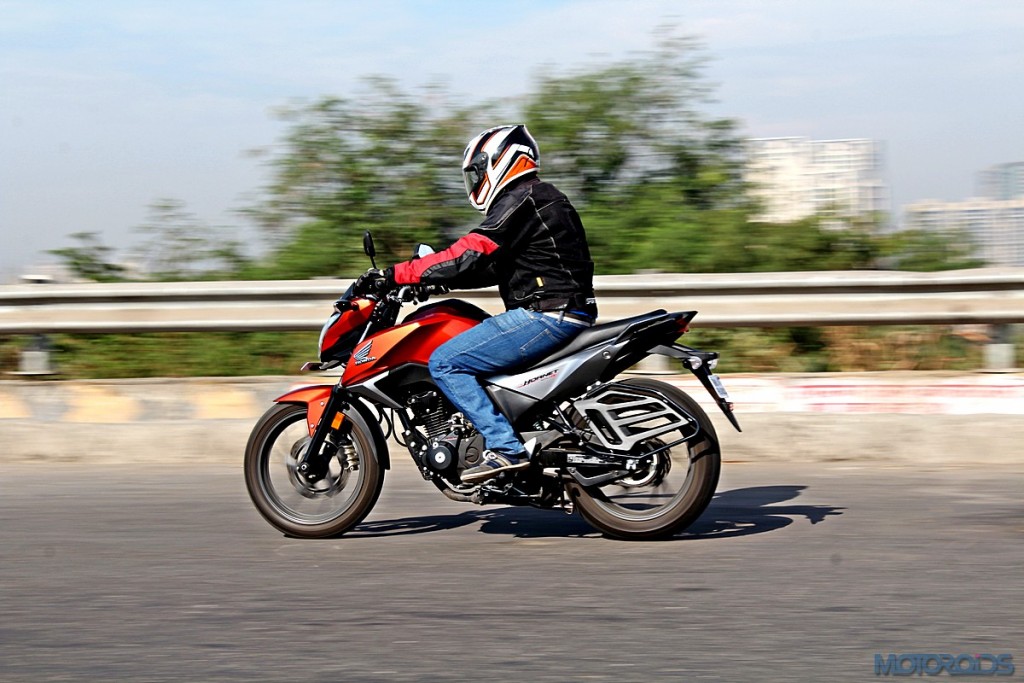 Refinement levels are great, though not in the league of what we’ve come to expect with Honda – although I quite like the muted, throaty sounds. Although we’re happy to report that there are negligible vibrations seeping in through the handlebars or the pegs. The ride quality is brilliant, and walks the fine line between cushy and stiff. The telescopic front shocks work great, but it’s the mono-shock at the back which brings about suppleness to the ride that’s quite pleasurable. 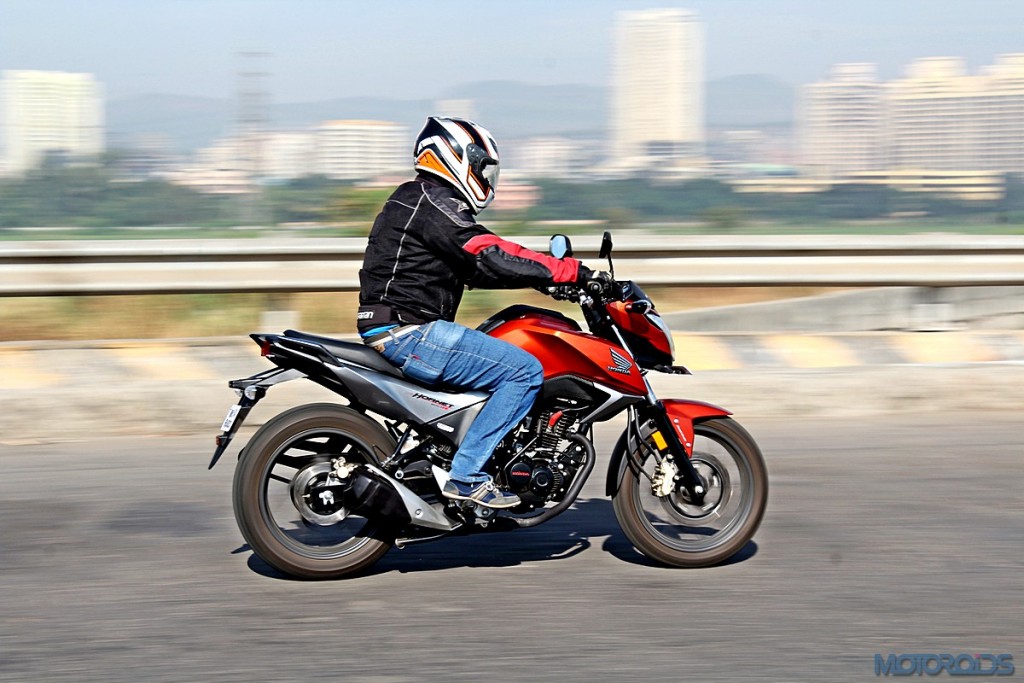 The Hornet handles predictably, with the well balanced chassis and mono-shock letting the motorcycle flow through the corners like hot knife through butter. It manages its weight and fluids gracefully around bends, strengthening its friendliness with the rider as the game progresses. The CB Hornet 160R comes with 17 inch, five-spoke alloy wheels, shod with 100/80 section tubeless tyres at front, and 140/70 section tubeless tyres, at the rear. Grip is adequate, but not so much when the tires are cold. Straight line stability is brilliant, and even in the upper reaches of its performance, the Hornet stays glued to the road, showing no signs of twitching or nervousness.

Fuel efficiency is not too bad, and after a day’s riding, which combined hard uphill climbs and mellow cruises, the Hornet returned a commendable 40.3 kmpl. The brakes are quite confidence inspiring as well, encouraging one to push the motorcycle to its limits. Nissin has done a fantastic job with the anchors here, with a 276mm petal disc up front, accompanied by an optional 220mm petal disc at the back. Bite and brake feel through the levers is top class, and the optional Combined Brake System (CBS) works wonders for stability during hard braking. A 130 mm drum brake comes as standard, without the CBS as well. The latter should be avoided at all costs. 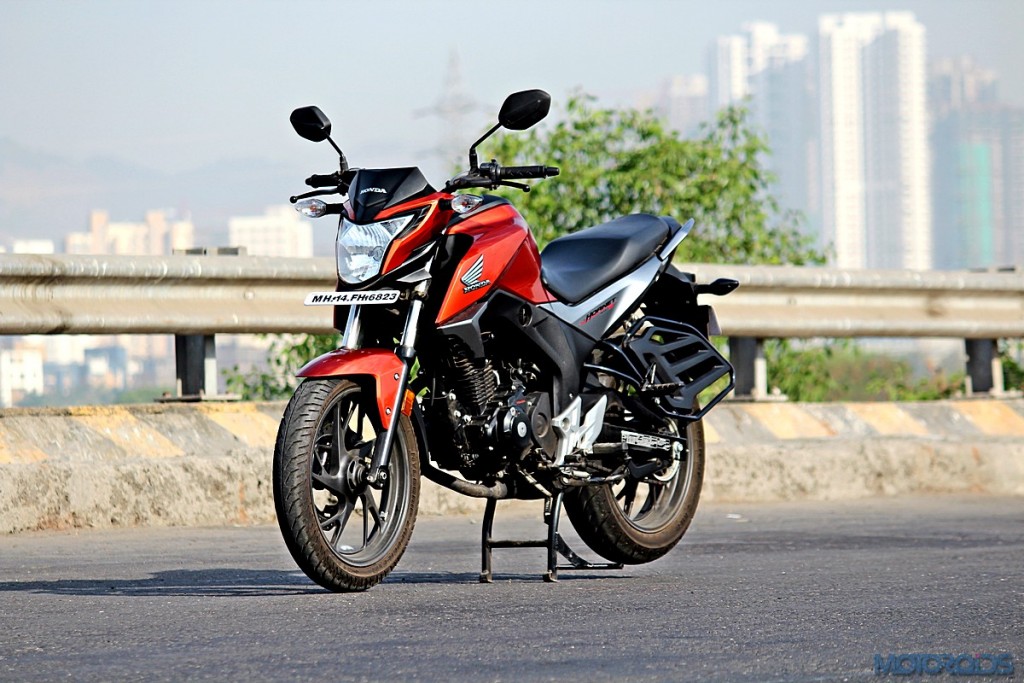 If you’re in the market for a premium commuter and are a Honda fan-boy, then yes, please go ahead and get yourself one. We think that it’s easily the best looking motorcycle in its class, and is also built rather well, apart from the ghastly switchgear of course. The performance is smooth, and though the trademark Honda revels of refinement from the motor isn’t there on the offing, we believe that the slight gruffness has been engineered in to match the Hornet’s slightly aggressive character.

The Hornet rides well, stops well, and handles predictably. There isn’t much to pick on here, and when it comes to the price, the Honda’s got it covered as well. Available for sale in 2 variants- Single Disc & Dual Disc with CBS, with prices starting at INR 79,900 onwards (ex-showroom, New Delhi), the new Honda CB Hornet 160 R makes a strong case for itself. It would have undeniably been the segment’s best buy, but it has something called the very capable Suzuki Gixxer 155 to fend off.