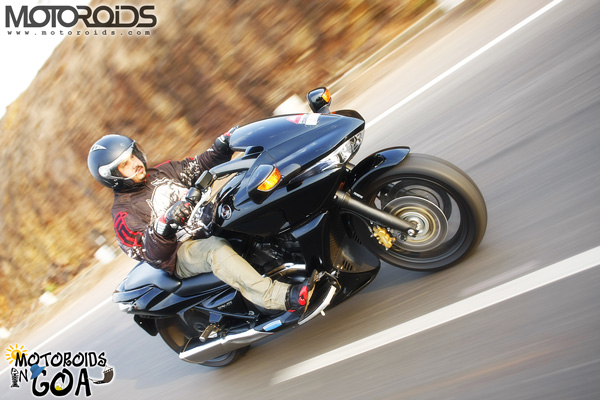 Back to the future

We were recently in Goa to shoot a few new stories, enjoy a vacation, scare a Maruti-Suzuki salesman and eat a lot of food! Speaking of which, apart from the Calamari and the Lobsters, there is another seafood delicacy that one can enjoy in Goa – it’s the hammer-head shark. But to hardcore foodies like us, this fish looks a tad too dumb to be eaten. We still went ahead and ordered one but its tough, tasteless meat did not impress us one bit and had us order a lot of port wine to wash down the hideous taste. The scenario forced our in-house gyani, Mr. Pradeb Biswas to start a detailed discussion on the various varieties of sharks and how privileged we were to have eaten one! He even defended the hammer-head’s freakish physical form and concluded that the Zen Estilo looked even dumber – to which we all agreed! But that had our discussion branch out into a new direction – how would an automobile look if it were designed to mimic a shark? A few minutes and glasses of wine later, we somehow managed to establish a relation between the ‘DN-01 concept’ that Honda showcased at the 2005 Tokyo Motor Show and the ‘face’ of a shark. Our friend and local biker boy from Goa, Ravee, who being a vegetarian and a non-drinker was bored to the core, suddenly sprung up and exclaimed ‘I have a friend in Goa who owns a DN-01!’ All of us raised our eyebrows and grinned…

The next day morning we met up with Ravee and his friend Amul, who introduced himself as a rally driver and a hardcore car and bike enthusiast. Having owned zillions of various cars and bikes till date, Amul current rides a DN-01, the production version of the exactly similar looking concept that our team had discussed about the previous night. The same body lines, the same colour, the same everything. Even after draining out all the wine from our system, the DN-01’s facia did look similar to a shark’s face with the sharp, pointed and aggressive nose, the menacing, cold, round eyes and the smooth, sculpted surface that may actually have the drag coefficient of a fish!

The digital console is a tad lower for my liking

Notice the beefy handlebars and their weird angle

The bike’s nose section extends backwards to integrate the fuel tank and air box housing. The top section of the nose protrudes to act as a wind deflector – there is no individual unit here. While the front of the bike follows this sharp design, the rest of the bike has a cubic form with the squarish cross section of the exhaust canister, the rectangular taillight assembly etc. The tubular frame forms a window on the left hand side to show off the mono-shock absorber and the ‘DN-01’ lettering on the engine casing, while on the other side of the bike, the same window in the frame is covered with a fibreglass panel to don the ‘DN-01’ monogram; weird symmetry. The DN-01 has a huge digital console under its so-called windshield and just like the rest of the bike, the console too is carried over as it is from the Tokyo Motor Show concept. Though the overall design of the bike is radical, the straight forks and the decade-old design on the Nissin callipers upfront, is a let-down.

The conventional straight forks are stiff. The Nissin calipers look like they came from year 2000. The DN-01 also packs in the confidence inspiring Combined-Anti-lock Braking System

Once you digest the new design of the DN-01 you need to spend a minute getting used to its controls and seating – after all you may know how to ride a boat, but that doesn’t mean you’ll be comfortable riding a tamed shark as well. The handlebars, to start off with, are at an unusual angle. Though the rake angle of the forks isn’t too extreme, the handlebars extend all the way back as if they were designed for a custom chopper. Add to that the fact that the bars’ beefy proportions intimidate you when you hold them for the first time. The seating posture is such that while the stretched out foot pegs need your feet to be placed in a chopper’s posture, the handlebars make you feel that you are clinging on to a scooter. But like any other Honda, this geometry makes the bike feel extremely light and easy to use (not necessarily comfortable) once you start rolling. However, the long wheelbase makes it difficult for a newbie to change directions on the DN-01 especially at crawling speeds. The conventional forks I complained about earlier, have a stiffer ride to offer. The seats are comfortable with their wide design, but the stiff suspension does become an issue on bumpy surfaces. On the highway, the wind-blast tires you further as the puny windshield isn’t all that effective.

…and is mated to the Human Friendly Transmission mentioned below

But with the beautifully laid out roads in Goa and the fast moving traffic on them, the DN-01 feels simply superb to cruise on. The 680cc V-twin engine is a smooth operator. In fact, it is so relaxed that is only churns out 43-odd horses from its two cylinders. The beauty of this machine however lies in the new transmission system. Honda calls it the Human Friendly Transmission (HFT). Unlike the conventional CVT transmission on your Activa, the HFT is an electronically controlled automatic transmission with a hydrostatic drive that employs a variable displacement axial piston pump with a variable-angle swashplate. You didn’t understand the last part, did you? Neither did I, to me it sounded more like Optimus Prime’s mating call! In simple terms, the HFT is a transmission which lets either lets you change gears with a small switch on the handlebar or allows you to relax and does all the gear shifting by itself.

Either way, the electronics make sure that the gearbox is giving you optimum performance. What this translates into is a laid back ride that gives you the comfort of a cruiser and the convenience of a scooter. The smoothness of a hydraulic shaft drive and the confidence of combined-ABS only make things better. When I rode the bike and tried the manual shifting, all it did was it gave me a few extra revs at the top end to play with. On the automatic mode the DN-01 resorted to a smaller rev-band for optimum performance. But even with all the gizmos, the DN-01 will sprint from naught to 100 km/h in a lethargic 8 seconds with an achievable top speed of 180-odd km/h. Given these performance and handling characteristics, I would prefer cruising on the DN-01 on some smooth country roads or even in the urban environs durining non-rush hour traffic. The vehicle isn’t exactly meant for the twisties or for long distance touring like some self-proclaimed experts have concluded in recent times. After all, Honda recommends only a 147 kilos of laden weight, leaving you little room for the luggage.

…while on the other side of the bike, the same window in the frame is covered with a fibreglass panel to don the ‘DN-01’ monogram

The ‘Drive’ and ‘Neutral’ mode selector

The DN-01 gets a car-style refueling lid…

Notice the single-sided swingarm and the trapezoidal exhaust canister

The wide seat is comfortable for the rider and the pillion, but Honda recommends only 147 kilos of laden weight. You know what I mean…

So is the DN-01 worth all the hype? Yes and No. You see, it showcases new technologies like the HFT, which may soon become standard for most two wheelers, the way an auto-tranny did for most cars. What the DN-01 also does is establish a new, aggressive design language in an age where Hondas had started to look too bland and boring as compared to their competitors’ wares. So it is worth all the hype, because it is an important step forward for Honda and an even bigger step of automobile design since the DN-01 is one of the very few concepts that have actually made it to the production line without losing the radical bits.

On the other hand, the DN-01’s price tag surpasses most bikes from Honda’s own stable, including the CBR1000RR and the VFR1200F! It may be justified when you are putting money down for a radical concept, but too much money to ask for when you are talking about pure performance. So if you are looking for a piece of automobile art to flaunt at your Saturday night parties, this is the one. But if you are looking for a hardcore cruiser or a sport tourer, there are other machines in the market that fit the bill better. With performance figures that can’t even shame a goldfish, our little Honda shark is not exactly a ferocious predator in this sea of concepts and production bikes. It is however that smart shark which likes to surface onto a beach every now and then to scare away a few kids and make its presence felt…