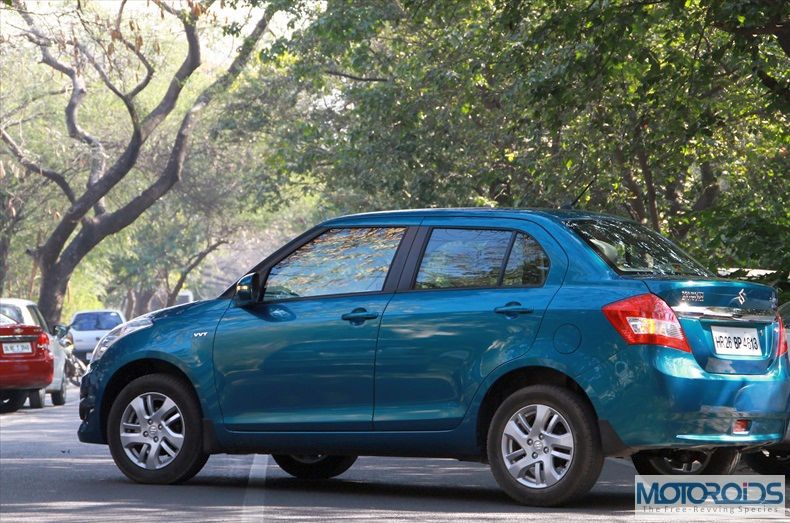 Review with inputs from Rohit Nagpal

So what if it wasn’t the most beautiful thing on wheels with a boot, you still had to wait eight months if you wanted one with a diesel heart. Frugal, spacious, reliable with a big boot and the Suzuki logo on the grille – it doesn’t require anything more than that for a car to be a hit in this market. Conventional wisdom would have suggested not tempering with the formula. It would have been prudent to just add a full size boot to the new Swift, brand it as the new Dzire, and keep the queues at the M-S showrooms long as ever. Just to let you know, the Dzire has sold more than 3.3 lakh units in the four years it has been in production. Big numbers, those, for a sedan.

MSIL, however, did not wish to stick with the old formula. They wanted a full model change, and by doing it early in the Dzire’s life they wanted to make a statement. They wanted to showcase the importance of the Swift DZire in Maruti Suzuki’s future plans. More importantly, they wanted to squeeze out that little excise duty cut benefit, taking a bit of a cue from the Indigo CS. And boy, do they seem to have succeeded! The new design, the company thinks will make the brand DZire more vibrant and engaging for the customers.

The new Swift DZire measures 3995mm in length (less than 4 meters, to quality for the excise duty cut) and has a width of 1695mm (+5mm, more shoulder room). The new Dzire is 25mm higher (more headroom) at 1530mm and even after being shorter in overall length, has a longer wheelbase of 2430mm (+40mm) adding not only to the overall vehicle stability, but also adding an additional 20mm leg space for the back benchers when compared to the previous model.

The 2012 Dzire weighs the same as its hatchback sibling, which means you get extra cabin space and a boot for no loss in power to weight ratio. Talking of the boot, the 2012 Dzire has a short behind. At 316 liters, the 2012 Dzire’s boot space is 86 liters less than that of its predecessor. 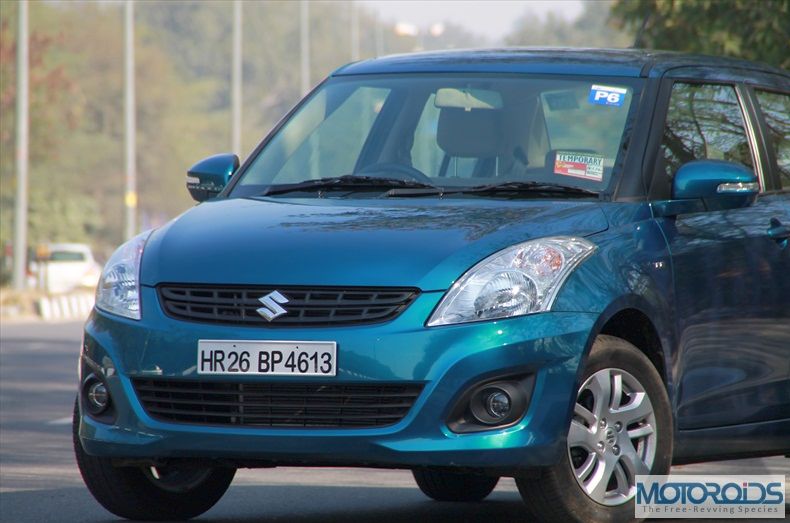 As expected, the Dzire is almost identical with its Swift hatchback sibling from the front end. Watch the car head on, and you would mistake it for the hatchback. There are a few giveaways though, the most prominent of which being the different design for the front grille mesh. Unlike the hatchback’s honeycomb mesh, this one has it slatted grille separated horizontally in two parts. The dissecting line holds the Suzuki logo and has eight elongated slot-like vents on either side in rows of two. The area around the central air dam on the bumper has slightly different lines when compared with those on the hatchback. The casings for the front fog lamps too are different from the ones of the hatchback. Just the way it was for the previous Dzire, subtle aberrations differentiate the sedan from its hatchback cousin.

In profile, one look, and the new Dzire gives away its shorter length. A stubbier and more angularly styled boot, with an integrated spoiler makes the new Dzire look significantly smaller than its predecessor. Having said that the tail lamp and the rear end looks better integrated than the previous version.

The smaller, more horizontally laid out tail-lamps most definitely look better than the ones on the previous model. It wouldn’t be wrong to say that the new, shorter, sharper boot, along with the redesigned tail lamps has lent the Dzire a sportier stance. The car looks more ready for action than its bulbous forebear. 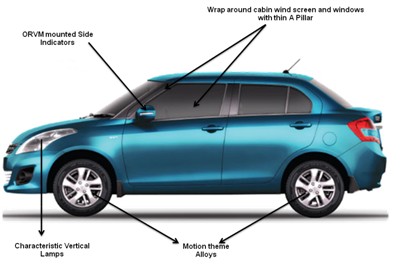 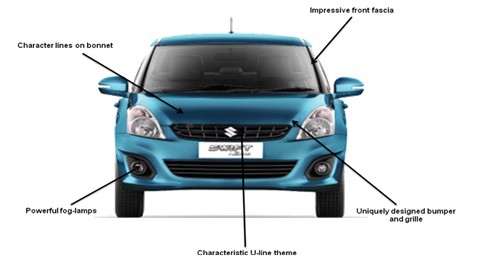 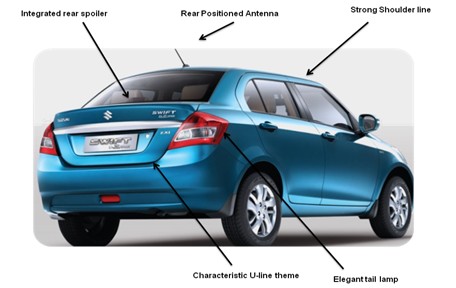 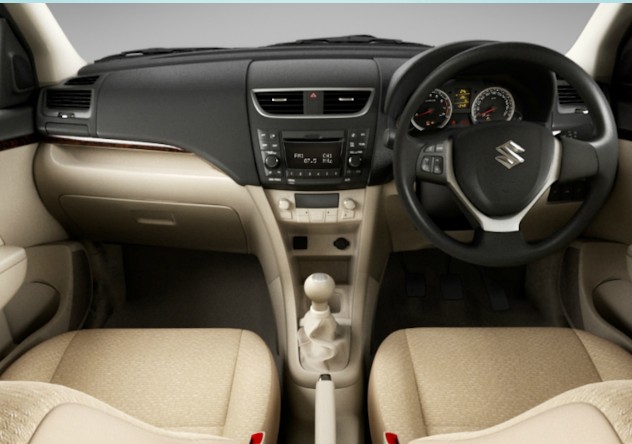 As discussed earlier, even with a shorter boot and an overall shorter size, the new Dzire boasts of more headroom and more shoulder / leg room for the back seat passenger. Apart from the volume and dimensions, the quality of the interior has been significantly improved. It’s a complete revamp exercise that MSIL has executed and just like the Swift hatch, the Dzire now boasts several new features and a dashboard that doesn’t appear to belong to the bygone era.

The use of beige colour materials on the lower parts of the dashboard, along with the use of a lighter shade for the seat fabric has raised the feeling of space within the cabin. The air vents are new, so are the wood finish inserts, silver accents, leather trims, chrome inserts and the slightly better grade seat fabric. Compared with the Swift hatchback, the Dzire’s grey-black interior appears more premium with its black-beige combo and a fabric material inspired with the texture of sand dunes. The instrument cluster now has a multi information display with a trip computer, which we think is a very important feature on any modern car and, of course, a welcome inclusion. 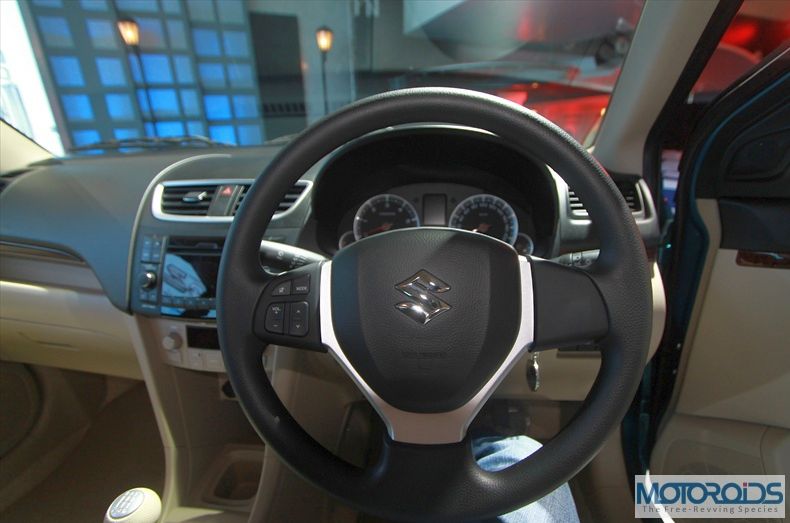 Talking of audio, the steering wheel now has the audio controls for the 6 speaker Integrated Music System that has aux-in and USB ports along with a 12V power output socket in the central console. Bluetooth connectivity though is sadly missed. Wood-finish and chrome inserts along with leather trim on the dashboard and door panels are worth noticing. Slide out cup holder in the dash board for the front passenger and bottle holders in front and rear door panels are good, though we missed seeing a cup holder on the center tunnel console.

Maruti Suzuki’s commitment to a smoke free environment is evident with the lack of cigarette lighter and ash tray. Of course, this helps cut the cost a wee bit too. The rear of the front seats has been slightly scooped. Adding this to the increased wheelbase, the rear passenger now enjoys an additional 20mm of leg space. The back benchers also have adjustable headrests and a central armrest for additional comfort. Maruti has also increased the size of the front seat back pocket to offer some additional storage space for the backseat passengers. Along with a variety of cubbyholes and bottle holders in door pockets, there are enough storage bins within the cabin to keep your goodies.

The company claims to have used superior quality, high grade polymers on door trims, AC blowers, instrument panel, trays, steering wheel and under bonnet components. The claim appears to be true, as the quality of the interior is perceptibly higher than the previous gen Dzire. 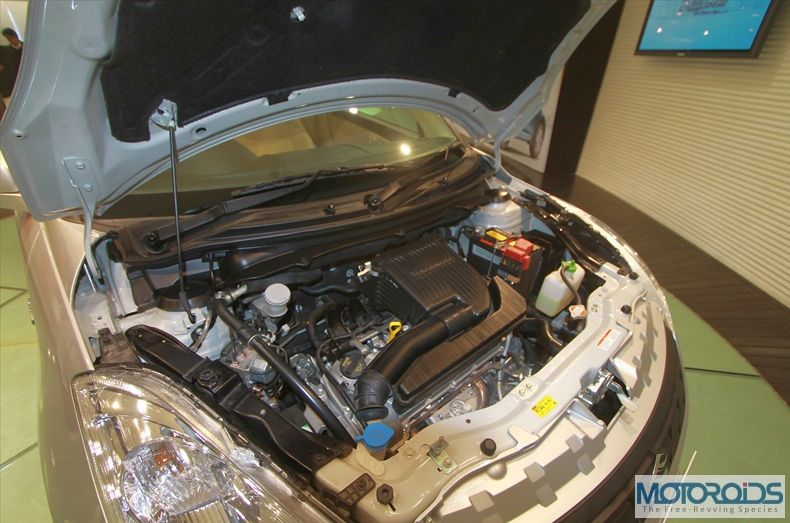 Both engines come mated with a five speed manual transmission. For the petrol engine, however, there is a four-speed auto option as well. The automatic option is available with the VXi variant. Why not with ZXi? Well, the company though that adding an auto option to an already expensive ZXi variant will take the prices way too high. So if you wish to opt for an automatic tranny, you have no option, but to live without features such as steering mounted audio controls, climate control and driver seat height adjuster.

The gearshift on the manual transmission is butter smooth. The auto transmission too works well with the petrol engine and does a good job of taking the annoyance away from bumper to bumper city driving. The gearshift points change intelligently at various rpms based on how enthusiastically you depress the accelerator pedal. All this work well at slow to moderate speeds, but not so much for enthusiastic driving. This 4 speed ain’t no DSG, and if you wish to use your car for some fervent driving, we’d advice you to refrain from buying the auto.

Both petrol and diesel motors on the new Dzire feel a tad sobered down when compared to the previous gen cars. The engine revs now climb up in a more progressive manner. This may have taken away a bit of the fun, especially with the diesel variant, but MSIL have managed to make the new car a lot more fuel efficient in the process, more on which later. 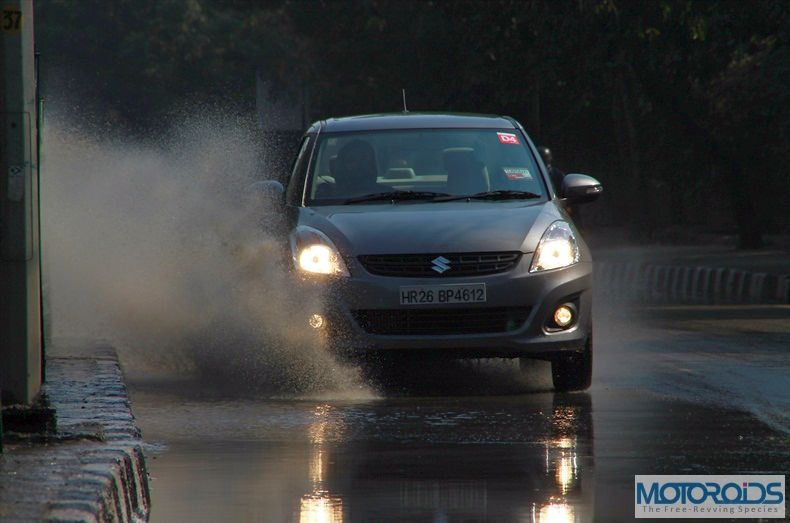 Maruti Suzuki have focused more on comfort than keeping the boy racers happy with the new Dzire. The result is a slightly softer suspension when compared with the Swift hatchback. The softer setup does make the car feel just that wee bit mushier when hurtled hard around bends, but helps absorb undulations at lower speeds much better. Unlike the Swift hatch, which has a tendency to feel a smidgeon bouncy at the backseat, especially over sharp bumps at low speeds, the Dzire feels much more composed.

From behind the wheel, we gleefully declare that the fun hasn’t gone anywhere. The famously expressive steering wheel of the Dzire manages to stay as charming as ever. There is ample feedback delivered to your palms from the road. The talkative steering wheel lets you know where you’re headed in an addictively fun manner. The previous Swift and the Dzire were known to be two of the most fun to drive cars in their respective segments. The equation remains the same with the advent of the 2012 Dzire.

The new 4-speed Automatic Transmission on the VXi trim gives a fuel efficiency of over 17.4 kmpl. (As certified by test agency under Rule 115 of CMVR 1989)

Here’s the official list of features on the new car, as mentioned by Maruti Suzuki

Price:
The price of the new Swift Dzire for all its variants is listed below

Although introductory, these prices demonstrate great value. Maruti Suzuki has thankfully passed the benefits of the excise duty cut to its customers, which is omething worth appreciation in these times of sliding margins. The new Dzire is a good 25-30k cheaper than its predecessor, even with more features, more cabin space and better quality. Even with 80 liters less of boot space, the new Dzire spells VFM and is a great buy for the price it’s offered at. 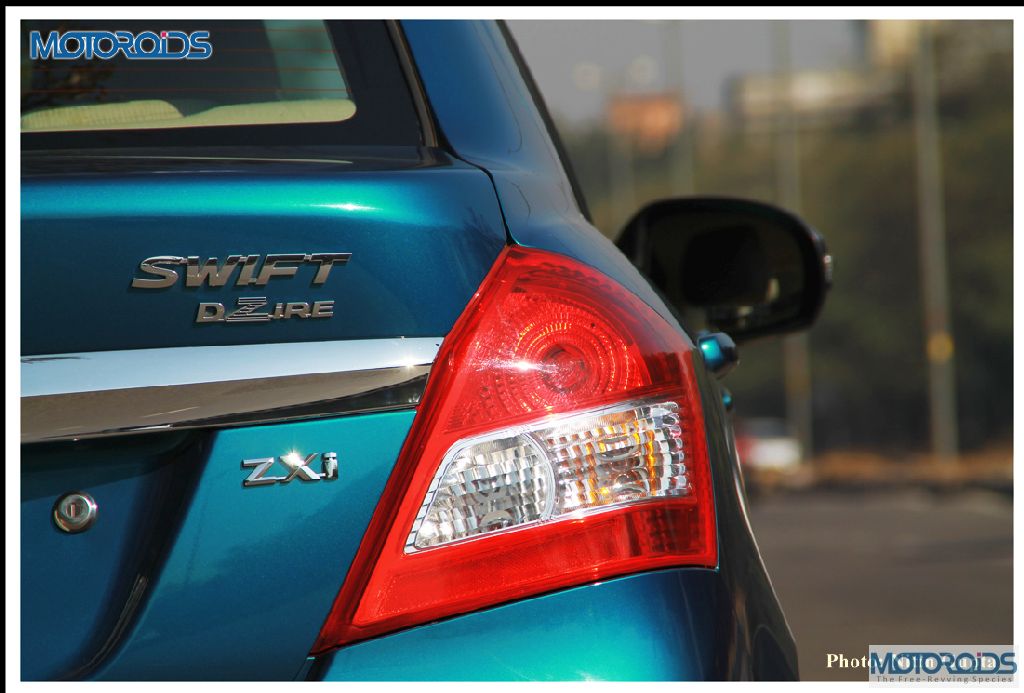 The Swift Dzire, ever since it was introduced has been defined by functionality, frugality, fun-to-drive aspect and value. It’s got a great engine, good cabin space, it’s reliable and very easy on the pocket to own, run and maintain. There isn’t a better-rounded product in the market than this in the segment at the moment. For those who don’t mind its oddball shape, there isn’t really a genuine alternative.