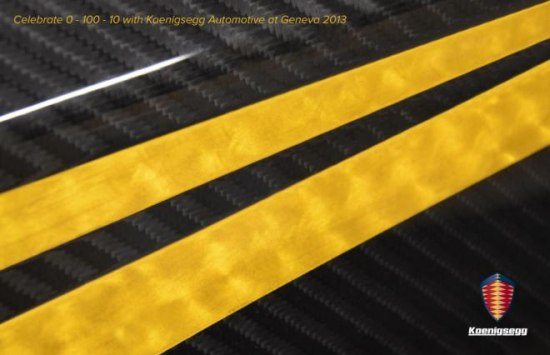 Performance car maker Koenigsegg has published a new teaser image of a new car which is scheduled to make its public debut at Geneva Motor Show next month.

Not much is known about the upcoming supercar but the Swedish supercar maker has titled the teaser image as “celebrate 0 – 100 – 10” and the pic shows a carbon fiber body panel.

Koenigsegg has launched many special edition variants of the 2013 Agera R and these special editions, namely the Agera R Hundra, One:1 and Agera S, have done reasonably well.

There is a good probability that the car being teased is yet another special editon of the Koenigsegg Agera and our guess is that it would feature lower curb weight (courtesy: CF panels) and might also borrow the one-piece carbon fiber wheels from the Agera S.