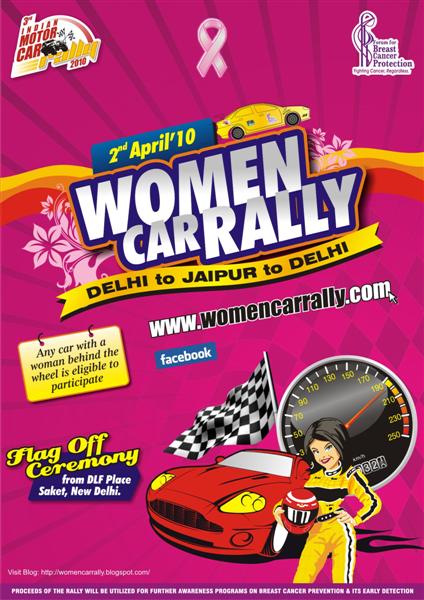 A Time Speed Distance rally may not necessarily be a race. It is more of precision driving where in the participants have to concentrate on maintaining the needed speed and being on the correct course of the rally. The Women Car Rally is a rally based on this TSD format where the participants are provided with both the route instructions as well as information regarding specific speed to be maintained at different sections of the rally. The speeds assigned are never illegal and are usually below the posted speed limit of the particular route or area. The rally will be held on the 2nd of April 2010.

To take part in this rally, the minimum requirement is a car and a woman holding the steering wheel. The team will consist of a woman driver and a navigator who will have to attempt to stay at the right course at the correct speed. The most accurate team will be at the perfect location and at the correct speed at a given time. Time checks at various unspecified locations will be used as the tool to determine the score of a team. The task of recording and comparing the time will be done by rally marshals. Travelling too fast or too slow would cost some valuable points through penalties.

The rally will witness breath taking views throughout the well planned course. The rally does not demand for special preparation and special cars. Participants can use their regular cars too for the rally.

To take part in the rally, click here or click on the image to get the online form which can be filled by aspiring participants.