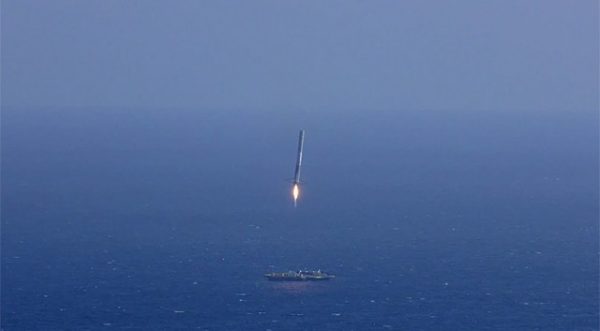 Okay, this is something a little bit different from what we usually write about. But think about it, space is the final frontier, and we think it would be correct to assume that Motoroids readers would be as interested in it as they are in automobiles. Especially when something as groundbreaking as this happens.

SpaceX, the private space company by Tesla Motors and PayPal founder Elon Musk has successfully landed a rocket on a floating barge on its second try. Granted, the rocket didn’t stay in place after landing for long, but this is still a monumental achievement and a huge step forward for mankind.

The idea behind SpaceX’s Falcon 9 and yesterday’s CRS-6 is to develop reusable rockets that detach from their payloads and fly back to Earth. If successful, spaceflight companies could launch the same rocket over and over and dramatically reduce the cost of launches. To this end, the Falcon 9 first stage is outfitted with four landing legs and grid fins to enable the landing attempt, which is a secondary objective of SpaceX. Cargo delivery to the station is the overriding primary objective and the entire reason for the CRS-6 mission.

As you can see in this video released by the company themselves, it didn’t go down exactly as planned. While the rocket did actually land on the ship properly, it had too much lateral velocity and tipped over immediately thereafter. You can see how the rocket swings to the side as it lines up, and then eventually falls over.

So yes, it was a failure, but this was still a step in the right direction. The last attempt following the January 2015 Dragon mission failed in a more dramatic fashion, when the steering fins on the Falcon 9 ran out of hydraulic fluid and the rocket smashed into the deck of the ship.

Once SpaceX masters the landing procedure, it plans to bring reusable rockets down on land where they can be quickly refueled for another launch. The next Falcon 9 launch for NASA is currently scheduled for June 19th.

No wonder, Musk has been cited as the inspiration behind billionaire-genius-playboy-philanthropist Tony Stark in the Iron Man movies.