Unless you have been hibernating in a cave for the past few weeks, you have definitely heard about the newest event that has hit Indian Motorsports – the Volkswagen Polo Cup! The one-make event got underway today as the 1.6-litre diesel powered race prepped Polo hatchbacks were flagged off at the ad hoc circuit conceptualised around the internal roads of the Shri Shiv Chhatrapati Sports Complex at Balewadi, Pune. What followed was some insane racing action as the 20 young drivers fought to their highest possible levels on the tricky, narrow race track. 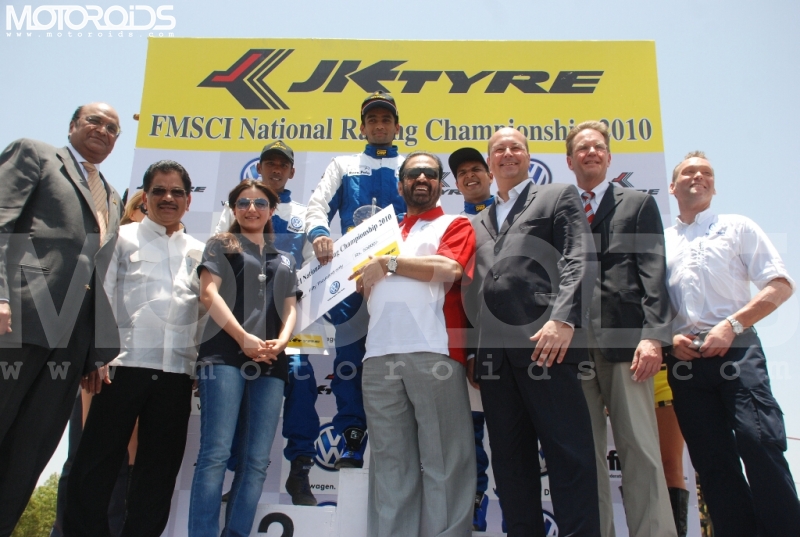 22-year old Shailesh Bolisetti from Vishakhapatnam got off to a flying start, making the most of his qualifying time from Saturday. Throughout the race he was closely followed by veteran racer Saran Vikram of Chennai. Behind this duo, Karthik Shankar from Delhi and Mohammed Fahad Kutty were involved in a battle of their own for the third spot. As the laps passed by, Shailesh held on to his lead all the way to the chequered flag to make history by winning the inaugural round of the first ever Polo Cup in India! Saran Vikram clinched the second spot on the podium. Meanwhile Mohammed Fahad Kutty who had overtaken Karthik Shankar by now was closing in on Saran Vikram, but a minor tussle with the tyre barrier in one of the corners damaged his car and slowed him down. However, the FMSCI Stewards penalised Mohammed for overtaking Karthik under the yellow flags which cost him his podium spot and the valuable points. Karthik hence moved on to the third spot on the podium to finish the winners line-up. 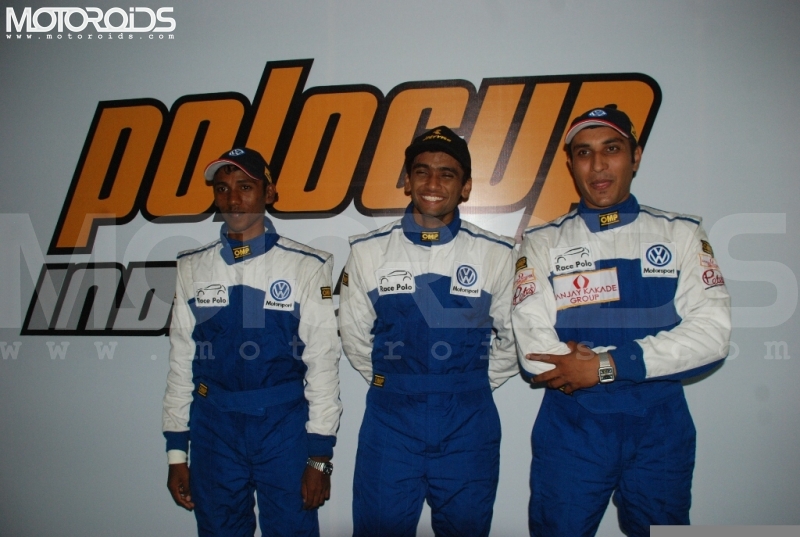 After this successful round in Pune, Maharashtra, the Polo Cup now moves down south for further motorsports action. Browse through the next set of pages for the driver quotes and other information about the Polo Cup 2010. Stay tuned to this feature for more pictures and wallpapers from the Pune round…

A delighted Sailesh commented, “This is a great day for me and I would liketo thank Volkswagen for giving me this amazing opportunity. I made a good start and after that just had to make sure that I did not make any mistakes. It was quite a tough race as the cars behind me were really close together but am really satisfied with the result.”

Prof Heizmann, Member of Board of Volkswagen AG, commented, “I would like to congratulate all the drivers for putting on a fantastic performance today. This is a proud day for motorsport in India and Volkswagen is really happy to be a part of it. We look forward to the rest of the season and am sure all the drivers will give it their best.”

Second placed Saran Vikram,“I am really happy to race here on this circuit and am satisfied with the result. As overtaking is tough on this circuit I knew challening Sailesh would not be possible. I will now try to do my best for the second race.“

Third placed karthik Shankar commented,“A big thank you to the organizers of this event for hosting such an amazing event. This is a historic day as not only is this only the second street race in India but also Volkswagen’s big entry into motorsport in India. Fahad Kutty overtook me under yellow flags and I knew that it was illegal so did not fight back. Will now look forward to a good result in the second race.“

At its Indian debut on the May 30 2010, the new Polo will present itself with a record field of contenders: 20 firmly registered young drivers aged 16 to 24 will meet on the track in cars with identical technology that are centrally tuned and maintained by highly skilled Volkswagen India Factory mechanics.

The Volkswagen Polo Cup, with excellent performance parity for every driver, is the first step-up the touring-car racing ladder.

The main points of the regulations:

– To be eligible to contest the series, a candidate must have successfully passed an evaluation and qualification course conducted by Volkswagen & JK driving camps.

– There is a nominal registration fee per season in the price bracket of 2.4 to 2.7 lakhs (6 racing weekends with 40 to 45 thousand rupees per weekend) which includes preparation, maintenance and transportation of the vehicle as well as the, team wear (racing overall sourced at factory price to be paid by the drivers), admission to the Volkswagen Hospitality and support by instructors and technical staff.

– To fulfill the entry cost for the races the drivers can also bring in their sponsors which would be approved by Volkswagen for a commercial display on the car, the racing suit and helmet.

– The drivers may not perform any modifications on the vehicle. Only the front stabiliser is three-way adjustable, in addition, the inflation pressure of the tyres may be adjusted.

– Per race weekend and driver a maximum of six JK slick tyres are permitted. The number of JK rain tyres is not defined.

– For the drivers, including the helmet, the HANS system and fireproof clothing, a standard weight of 80 kilograms has been established. Drivers weighing less than that will be given respective ballast, which is installed under the driver’s seat, to compensate for the difference.

– Before each event the vehicles are swapped among the drivers within the colour-coded groups. The assignment of mechanics varies as well.

– Per event a free practice and a qualifying session, each lasting 30 minutes, are scheduled.

– After the free practice and qualifying sessions, respectively, a driver’s name is drawn from the top five who will disclose the data recorded for his or her fastest lap to all the other contenders.

– Guest entrants receive no points and no prize money. Registered contenders move up in the points and prize money classification

Exchange program for the drivers:

Motorsport on a global scale: Volkswagen cars are not only at home on the roads but also on the race tracks all over the world. One-make cups like the Polo Cup in South Africa, the Golf GTI Cup in Japan, the Jetta-TDI Cup in the USA and the Scirocco Cup in China span the globe. A unique exchange programme for motorsport talent , provides the connecting link between these international activities.

Every year the best contenders from the Polo Cup India travel to other countries and foreign championships to further their race driving education. These trips give the emerging talents the opportunity to prove their skills in highly different conditions and to get to know the respective countries and people in the process. In return, participants from the partner series contest races in the German Polo Cup as well.