In an unfortunate incident in China, a woman drover a brand new BMW X1 SUV into the dealership while trying to park the vehicle after a test drive. The incident, which took place in Guangzhou City, Southern China was captured on the CCTV camera in the showroom. 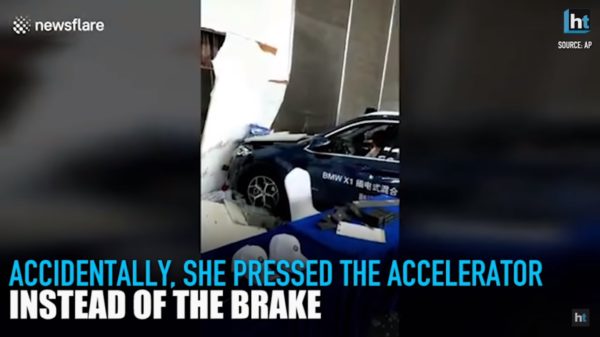 As seen in the video footage, it appears that the woman accidentally pressed the accelerator instead of the brakes which caused the USD 57,200 SUV to drive through the glass door, and onto the reception area of the showroom before hitting a wall. Some reports suggest that two employees inside the showroom suffered minor injuries while others say that everyone escaped unharmed.

Watch the video footage of the accident below (courtesy Hindustan Times):

The repairs to the vehicle and the showroom would cost quite some money and we really hope both the parties are sufficiently insured.