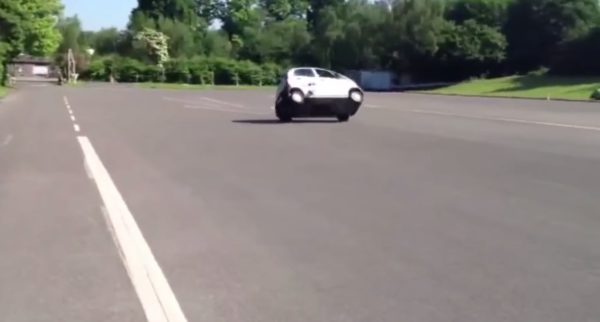 A video of the Tata Nano taking a tumble during a test has surfaced on the internet. The Nano test car in question was being subjected to the Moose Test which benchmarks the maneuverability of a vehicle in emergency situations to simulate evading real life threats on the road. The car, owing to its narrow track, slim footwear and high centre of gravity couldn’t quite make it successfully through the test. The Moose Test, generally, is carried on at speeds of 60 kph to 80 kph. This test on the Nano, however, was carried out at 30 kph with four people on board.

To be fair to the Nano, the car never laid any claims on being a dynamically accomplished automobile. Having started its life as a substitute to unsafe two-wheelers, the Nano’s raison d’etre was to provide a better personal transport alternative to Indian families who didn’t have the resource to buy a full-fledged car. It was meant to protect the occupants from the elements and save the lady of the house sitting on the pillion seat with both her legs on one side and the little kid hanging off her lap from falling off the vehicle. It wasn’t designed to excel dynamically, and as evident in the test video, it really isn’t. Having said all of that, though, a car toppling at 30 kph is dangerous, even in the most undemanding conditions.

Here is the video of the crash:

It’s not for the first time, though, that a car has failed the Moose Test. There have been incidents of bigger, much more expensive cars having fared miserably in the test.  The models which scored horrendously include the previous generation Mercedes-Benz B-Class and the Dacia Duster in its AWD format.

Here we have some more videos of some cars failing the Moose Test:

While the crash may not appear to be severe, it did leave the driver with an broker arm. The details about the rest of the occupants is still unknown but we assume that they did not suffer any major injury. The Tata Nano receives a narrow track and tall body structure, which is the most essential reason for its dynamic incompetence. Some of that inability, however, can be mitigated by introduction of active safety technologies such as ABS and ESP. However, knowing the market segment this specific model caters to, that expectation would be a tad too optimistic.

We earnestly hope and wish the Indian government makes basic active and passive safety tech such as ABS, ESP and airbags a compulsory feature on all the new cars so as to reduce the loss of life and limb caused due to  a loss of control during emergency maneuvers.

What do you think of this crash? Share your views with us through the comment section below.