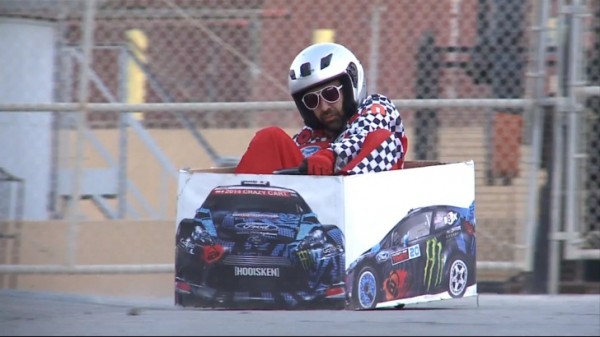 Ken Block’s Gymkhana 7 exploded onto the internet a few days ago, and we are pretty sure anyone who hasn’t been living under a rock has seen it at least once by now. Now in its seventh iteration the Gymkhana servies of viral videos catapulted business owner, rallycross racer and ‘hooning’ expert Ken Block to internet fame, making him a common name in automotive circles and boys’ dorm rooms everywhere.

And when you reach that level of fame in life, there follows the homages and, as sure as rain, the parodies. Ali Kermani, a garage inventor and a hooning enthusiast himself, has attained his own level of stardom with his first Crazy Kart parody, and now he’s back with his second installment. Like the previous one, this video also features Ali, also known as Ken Box, appropriately, powersliding around a loading dock in a mini kart.

But not just any mini kart will do here. This high-powered kart is festooned with appropriate logos that ever so slightly resembles the livery on Ken Block’s Ford Fiesta ST – the one used in Gymkhana Six – but modified slightly to avoid a lawsuit by you know who. Motive power comes from a 24 volt, 200-watt motor, capable of hauling this puny machine to a staggering top speed of 20 kmph.

It also has a drift bar, which enables Ali to vary the rear caster angle so the thing can drive and drift forward, backward, sideways, diagonally and everything in between. There’s no brake pedal though, so you’re going to have to learn how to stop by pulling a quick 180-degree turn.

And yeah, if you fancy yourself a Ken Block in the making, Ali’s company Razor, which created the kart, will sell you one.

And here’s the original Gymkhana Six, just in case you missed it the first time round.