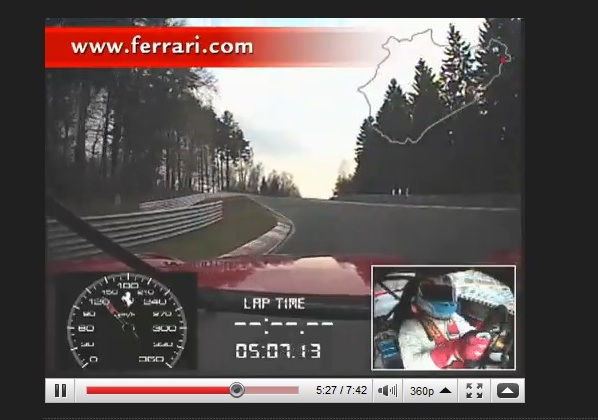 The Ferrari 599XX has become the first ever production-derived sports car to break the 7-minute barrier on the Nürburgring Nordschleife circuit which is a whopping 20.832 km long. The car lapped the circuit in a time of 6 min 58.16 sec, shaving off a good 28 seconds from the GT-Rs record of 7 minutes and 26 seconds.

The Gumpert Apollo S had posted a time of 7m11s at the Nurburgring last summer but Ferrari has licked the record by quite some margin. But the legitimacy of this record is still in question. The Ferrari 599XX is not a road-legal car. They are trying to undermine the fastest time set on the Ring by by the Radical SR8 earlier, which lapped the ‘Ring in 6 minutes and 48 seconds earlier by calling it the fastest time posted by a production-derived car, but the fact remains that the 599XX is NOT a road-legal car, so it somehow hangs in the middle of nowhere in terms of record legitimacy.

Ferrari’s road car test driver Raffaele de Simone created the new record on 21st April 2010, bettering the time of 6 minutes and 58.5 seconds set by German Touring Car Driver Florian Gruber in another Ferrari 599XX. This time is even better than the time of 6 minutes 58.6 seconds set by Nicky Lauda in 1975 in a Ferrari 312T Formula One car that put the Austrian legend on pole position. This was also the best ever time for an F1 car on the Nürburgring Nordschleife circuit.

Known as The Green Hell, Nurburgring remains the ultimate test of a car’s all-round performance. The 599XX, which inspired the 599 GTO, is a technological extravaganza with some of its technology having filtered down to the 599 GTO introduced at the Beijing Motor Show.

The 599XX is powered by an advanced version of the V12 engine powering the 599 GTB Fiorano, the 599XX features Ferrari’s High-Performance Dynamic Concept. Ferrari have used this record run as a precursor to the launch of the Ferrari 599GTO which will be the fastest road-going Ferrari ever!