The upcoming Mahindra Scorpio facelift has been caught on test again. The car was spotted and clicked by the good folks at Anything on Wheels in Chennai near Mahindra’s R&D facility.

Although the front pictures are not available, we already have seen that the facelift test mules were wearing a Bolero-like grille. Also visible in the images is a box, which is nothing but a emission testing equipment. This equipment is connected to the exhaust of the test mule for checking the emission levels. 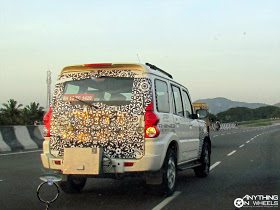 As we have been saying, the Mahindra Scorpio  facelift will come to us with a new front and a revised rear end. The facelift should make the fast ageing car look fresh for some more time, before the next gen Scorpio is launched. 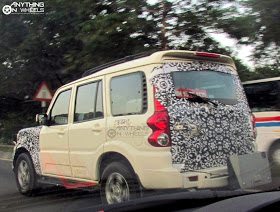 The Mahindra Scorpio facelift’s entirely new front end would sport a new bumper, new radiator grille, revised headlamps and probably new fenders. The car’s revised rear end will come with new lights, revised tailgate and bumper. It is being said that apart from the front and rear fascias, the car’s dashboard and upholstery too will be changed. 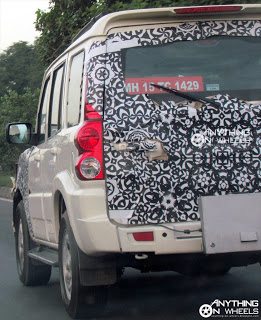 Worth a mention here is that the Scorpio has been on duty since almost 11 years now and the advent of new vehicles has ensured that the sales of the popular Mahindra SUV has taken quite a hit. 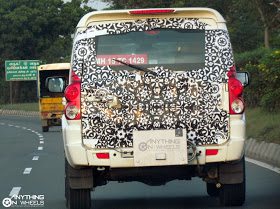 The car could also get additional equipment. Don’t be too surprised if the new Mahindra Scorpio facelift is launched at the 2014 Delhi Auto Expo.

Stay tuned to Motoroids for more dope on the Mahindra Scorpio Facelift.