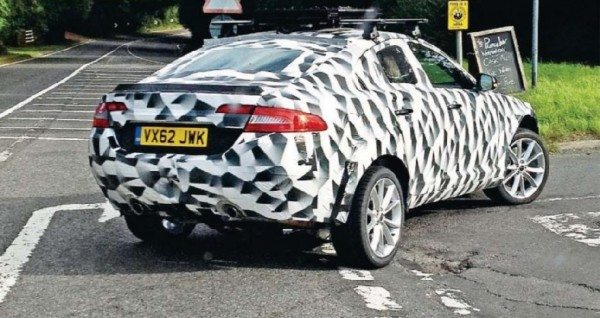 Regulars to Motoroids would know that Tata owned British premium car maker group Jaguar Land Rover is busy readying its first ever Crossover. It is being said that Jaguar has already bought the rights to names ‘Jaguar XQ‘ and ‘Jaguar Q-Type‘ and is likely to use either of these for its first ever SUV. It is also being said that Jaguar would unveil its SUV at the upcoming Frankfurt Motor Show, which starts on September 10. However, looking at the amount of camouflage the car is wearing, we feel that the XQ might as well give Frankfurt a miss.

There also are good chances that the manufacturer might choose to unveil just a few sketches instead of the actual car at the fast approaching motor show. As can be seen in the image, the XQ will be a coupe-crossover and we believe that it would have only limited off road-ing capabilities. The upcoming SUV is likely to share its platform with the upcoming entry level sedan from Jaguar. This sedan would be a BMW 3 Series adversary and would go on sale along with the SUV. Both the upcoming Jags will be underpinned by a shortened version of the Jaguar XJ’s aluminium platform.

The Jaguar XO SUV is expected to go on sale in early 2016 and in all probability, India would become one of the first few countries to get this vehicle. The upcoming Jaguar XO would be seen rivalling the BMW X1, the Audi Q3 and the upcoming Mercedes MLA.

Stay tuned to Motoroids for more details on the Jaguar XO aka Jaguar Q-Type SUV.