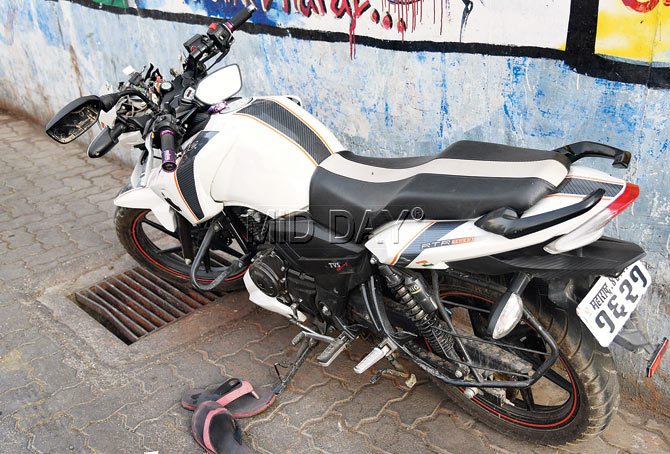 Some of you would probably laugh at us for even pointing such an incident out. With the way roads are built and maintained in India, such mishaps are a common occurrence, and most of the times, an earning member of a family would lose his life with no one even raising an eyebrow if the cause of the accident was a lurking pothole or an ill-built speed-breaker, like the one in this specific case. For once, we have decided to not take such a sorry incident ‘as just another mishap’. Another life is lost, and as always, there doesn’t seem to be anyone who could be held accountable for it. Our job here is to report, though, and so we are, so all of us can probably take a moment out from our lives and spare a thought to the dangers of something considered as ‘innocuous’ as a speed bump, among a multitude other of such perils on our roads.

An unmarked speed-breaker in Mumbai’s Kandivali area became the cause of a serious accident, killing the rider on the spot while critically injuring the pillion. The speed-breaker did not have reflective lights or white strips due to which rider of the White TVS Apache RTR180, Nilesh Kadam, could not see the obstruction in the way and lost control of his vehicle. After the fall, Kadam was run over by a Maruti Swift behind. The driver fled the spot after the accident.

While Kadam succumbed to his injuries, the pillion, Ajay Thorat, was seriously injured and is currently admitted at Shatabdi Hospital in a critical state. The accident took place at Rajguru bridge near Kalpataru Gardens at approximately 11.15 pm on Wednesday. The two were not wearing helmets.

Kadam is survived by an eight-month pregnant wife.

Thorat’s brother-in-law Sanjay Bhaviskar told Mid-Day, “He lost control over his bike after hitting the speed breaker. Eyewitnesses told us that they weren’t speeding, but they failed to spot the speed breaker. A Swift car that was behind them ran over them.”

Unlike most developed countries we simply don’t have any regulation for the construction and maintenance of our streets. Paving a rock-ridden surface with some coal-tar and rolling it over with heavy iron makes it qualify as a ‘road’ – and the less we speak about those lofty mounds emerging out of the ground, termed as speed breakers, the better. Shouldn’t there be someone accountable for such horrid incidents? As tax paying citizens, do we not have the right to travel safely, and not perish without any fault of ours?

We’d really be looking forward to your views and opinions on this subject. We are even open to creating a nationwide campaign to ensure some sort of consistency and structure in the way roads are built and marked in this part of the world. Do share your thoughts.