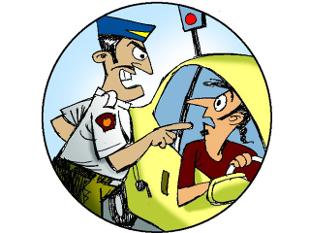 Driving discipline and Indian driving ‘style’, usually don’t go hand-in-hand. Jumping a set of lights is nothing too out of the ordinary for most of us in this country and that is quite a shameful fact. That’s not it; the list also includes folks who don’t wear their seatbelts, bikers who won’t put on their helmets and most frustratingly, idiots who don’t give way to emergency units. Many of us presume that there aren’t strict enough rules that are set in place, but that isn’t true. When the Draft Road Transport and Safety Bill was passed, the proposed fine for first-time offenders of traffic rules was between the region of Rs. 2500 to Rs. 20,000, depending on the severity of your violation.

But recently, the road transport ministry announced that it is to soon reduce these figures by a fifth! Why? The reason is simple; we all know people who have bribed their way out of a sticky situation with a traffic cop. Briskly, yet carefully slide a 100 Rupee note to him and mostly, he will wave you a pleasant goodbye. But, nowadays the Govt. is trying their utmost to eradicate such illegal practices and that means thinking outside the box. Let us explain how’s that been done. You see, if you charge an offender a massive amount for a petty offence, chances are that they would rather get away by bribing the official and that would be it. But what the road transport ministry has done, is that they have chopped the violations fine amount by a fifth. This means that the offender will be now charged Rs. 500, instead of the former Rs. 2500 and Rs. 5000, instead of 20,000 bucks. Now you will be able to understand the strategy behind this simple, yet cunning move by the authorities.

“The minister strongly supported the need to increase the fine for repeat offences so that the first time offender is warned how he has to shell out more for committing next offence. We are reworking the fines for second and every successive offence. The fine is being tweaked so that the provisions of the law can be enforced. We will soon move a Cabinet note on the bill,” a road transport ministry official said. When the ministry bumped up the violations fines by 25-50 times their then present amount, many of the Govt. entities and organisations had contradicted on the idea. At the time, the fine for jumping a set of traffic lights was a mere Rs. 100. The ministry spiked that amount to a more ‘appreciable’ Rs. 5000! But the opposition clearly pointed out that an increase in fines by such vast amounts would only help corruption grow within the system, by offenders often choosing to bribe their way out. And we do agree on that point made by the opposition, makes a good deal of sense to us.

Hopefully, with this newer system in place, we should see more and more road users respecting the rules and regulations of the very roads they use to commute. Let us know what you think of this new move by the authorities and you think this will help cut down on the rampant traffic violations that we see today.