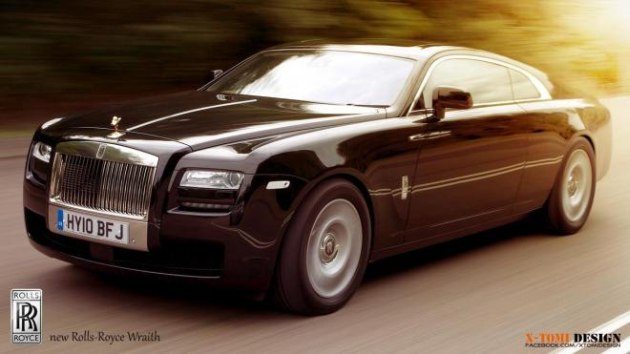 Rolls Royce is all set to unveil the all new Rolls Royce Wraith at the fast approaching Geneva Motor Show next week. The Wraith will become the only 2 door coupe in the British luxury carmaker’s line up and will aim at those looking for a sporty but luxurious car with focus on outright performance.

Worldwide, car aficionados are waiting to see if the BMW owned British car marque, known for making the ultimate luxury sedans, manages to get it right with a modern two door sports coupe.

The Wraith is based on the Ghost sedan, the entry level sedan in Rolls Royce lineup. The Ghost, in turn, is loosely based on the BMW 7 Series flagship sedan. The upcoming coupe will be the most powerful Roller ever and the teaser images of that we saw earlier reveal that the new car will come with a sportback body style.

Powering the new Roller will be a 6.6-liter Twin Turbo V12 motor tuned to produce at least 600bhp. The car is expected to be capable of dismissing 100kmph from standstill in around 4.5 secs.

The best news about the new Roller is that the Wraith is headed to India and might be launched as soon as in July this year. Paul Harris, regional director, Asia Pacific, Rolls-Royce Motor Cars said, “A new model will be added this year and this will spur the interest among the prospective buyers. We operate in a niche area and therefore the number of new models and launches will be spaced”.

Rolly Royce India plans to hold a special preview of the new car for a select audience before launching it in Indian car market.

What you see here in the lead image is a rendering that hints at the way the new car might look like.

The new Rolls Royce Wraith is expected to go on sale for a price of INR 1.6 crore.