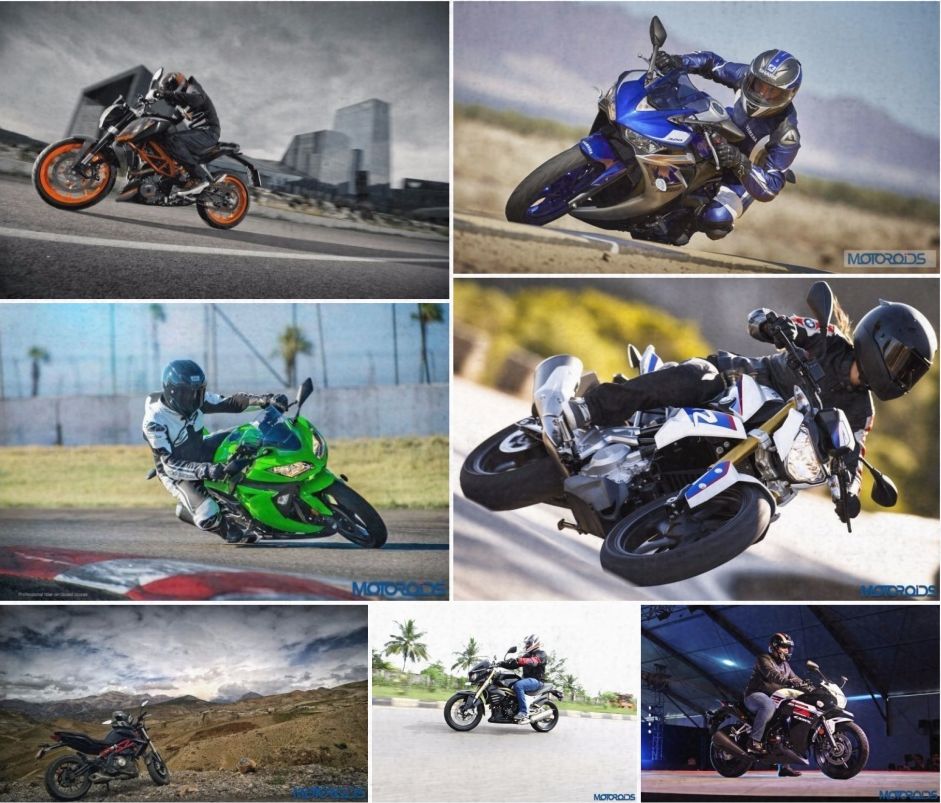 BMW Motorrad recently unveiled its first sub-500cc roadster, the G 310 R. This new entry-level motorcycle will be developed by BMW and manufactured by the Bavarian two-wheeler maker’s new partner, TVS Motors. The new G 310 R is aimed to grab a slice of the booming entry-level performance motorcycle segment which is currently dominated by Indo-Austrian product, the KTM 390 Duke. We did not want the Japanese trio to feel left out but their respective streetfighter motorcycles that would compete against the upcoming G 310 R are yet to reach Indian shores. Thus we selected the existing products from the Indian two-wheeler market that would directly compete with this upcoming BMW. 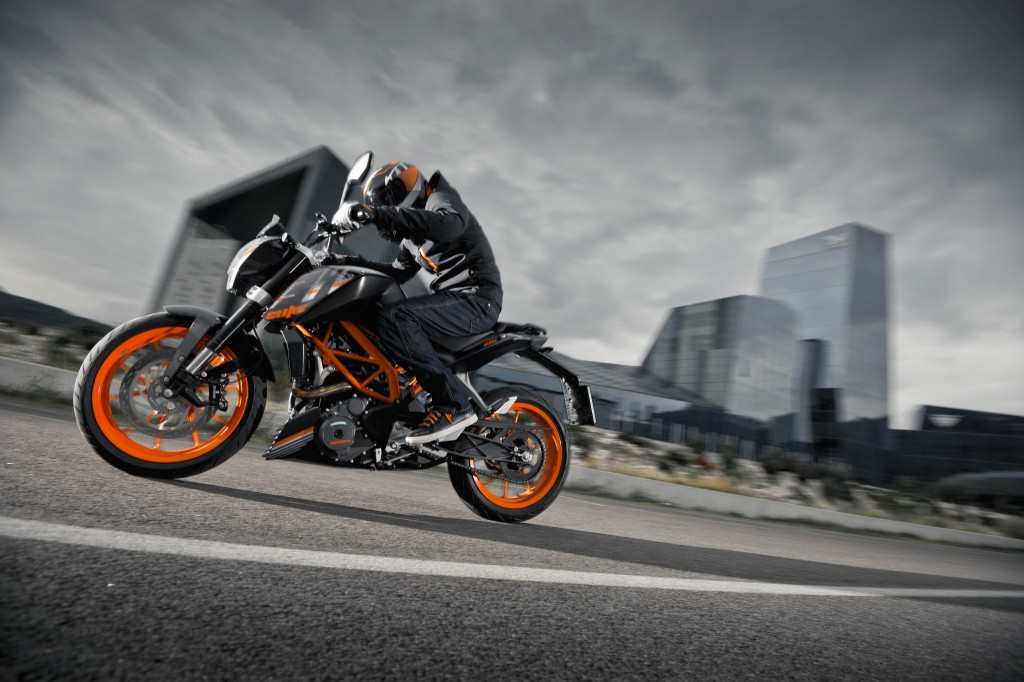 In terms of displacement, power and torque, it’s the KTM that outruns all the motorcycles in this tech spec comparison. The 373cc liquid-cooled single-cylinder 4-stroke engine delivers 43.5 PS of power and 35Nm of torque. Add to that performance, a list of premium features such as beefy upside-down front forks, ABS, slipper clutch, steel braided brake lines and a highly competitive price tag, and you have the most value for money entry level performance motorcycle in the country today.

Moreover, the KTM RC390, the fully faired avatar of the 390 Duke recently got updated internationally with new features including the ride-by-wire technology and we expect the upcoming MY2016 version of the naked roadster to benefit from the same very soon. If naked roadsters do not make the cut for you, you can also opt for a fully faired version of the 390 Duke, the RC390. The new KTM RC390, for 2016, benefits from a slew of premium features, albeit at a slightly higher price tag. 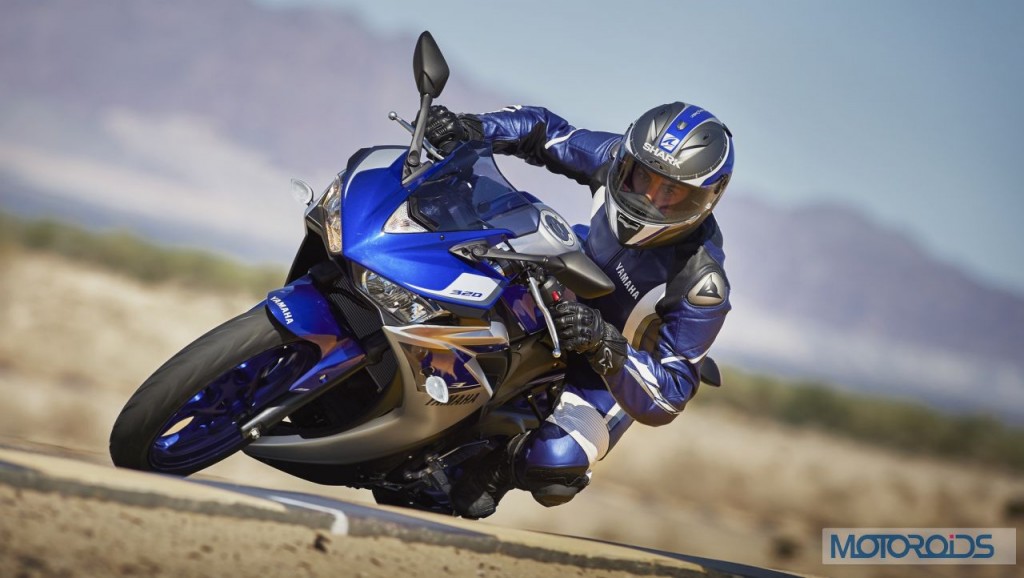 Running in close on the second spot in terms of performance is the Yamaha YZF-R3. The YZF-R3 missed out the much applauded Deltabox frame, for a diamond frame chassis which was a bit of a disappointment. But what it did get in the bargain is a friendlier, more road-happy, and less track-worthy ergonomics than the rest of the YZF family. The YZF-R3’s 321cc twin-cylinder, liquid-cooled, 4-stroke, DOHC motor was one of the smoothest units that we rode for a very long time.

The twin-cylinder motor felt vibe-free and refined throughout the RPM band and had a linear power delivery. The 68.0 mm bore and 44.1 mm stroke puts out a healthy 42 PS of power and 29.6 Nm of torque. The motorcycle, however, does not carry the long feature list as the KTM 390 Duke, not even the ABS, and also comes at a hefty price point. But what you do get for that hefty price tag is a thoroughbred Japanese motor with true-blue Yamaha genes and a chance to brag to your friends, “Rossi helped develop my bike. What about yours?” 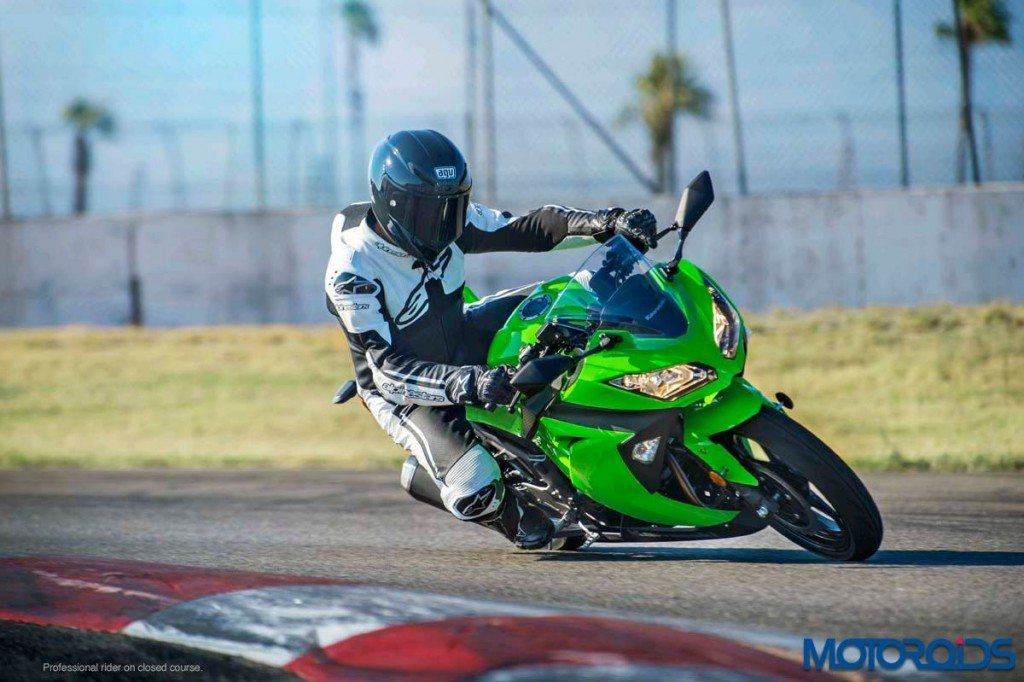 The little green monster from Kawasaki grabs the third position in terms of performance in this tech-spec comparo. The 296cc liquid-cooled, parallel twin cylinder engine puts out 39 PS of power and 27 Nm of torque. Similar to the Yamaha YZF-R3, the Kawasaki Ninja 300 also offers a big-motorcycle like styling, relaxed riding position and a great engine.

But unlike the YZF-R3, the Ninja 300 comes equipped with a slipper clutch which really comes handy during aggressive downshifts. However, there is a big downside to this Japanese motorcycle and that, besides the lack of ABS for the Indian market, is the hefty price tag that it carries. The Kawasaki Ninja 300 is the most expensive motorcycle in this comparison and in the segment with an ex-showroom Delhi price tag of Rs 3.6 lakh. 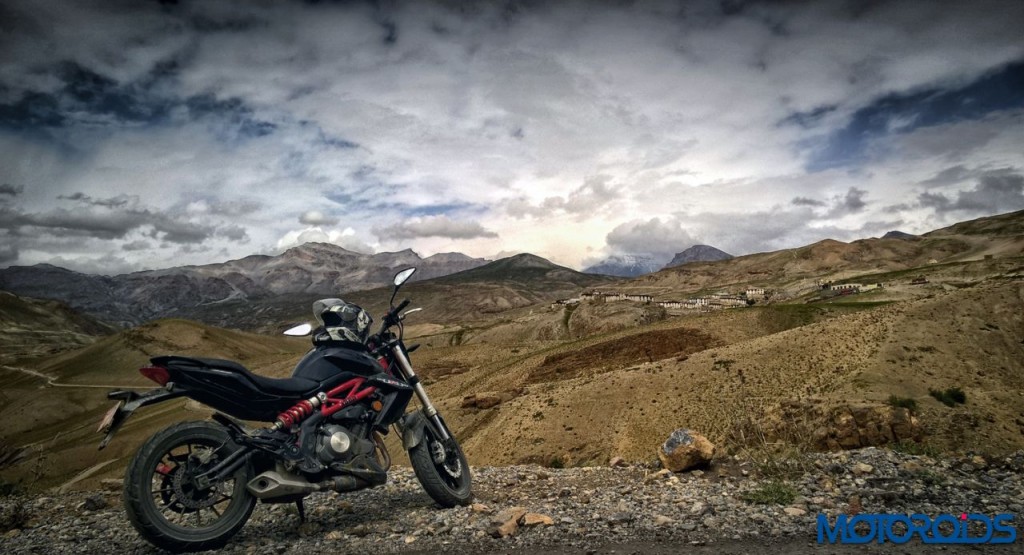 The Italians were practically absent in the Indian entry-level performance motorcycle segment till the Chinese owned Italian marque, Benelli made its entry in the sub-continent. Running very close to the Kawasaki in terms of performance is the Benelli’s smallest Tornado Naked Tre motorcycle in India today, the TNT 300. Drawing power from a 300cc liquid cooled twin-cylinder 4-stroke engine, the TNT 300 is the sweetest sounding machine in the segment. At high revs, the motorcycle almost sounds like an in-line four cylinder motor. The motorcycle is quite good on performance too.

Click here to read our exhaustive review of the Benelli TNT300

The 300cc motor delivers a healthy 38 PS of power and 26.5 Nm of torque. The motorcycle comes packed with features such as upside down front fork, steel braided brakes lines and generous lashings of faux carbon fibre and brushed aluminum throughout. Similar to almost the entire Benelli family, the TNT300 does not get ABS. However, the Benelli gets potent 260mm dual disc brakes upfront, unlike single disc setup on its competitors, and a 240mm single disc unit at the rear which provides a good feedback. The price might be on a slightly higher side, especially for a brand that is relatively new to the masses but the complete package is definitely worth considering, especially that raw, throaty roar from the exhaust. 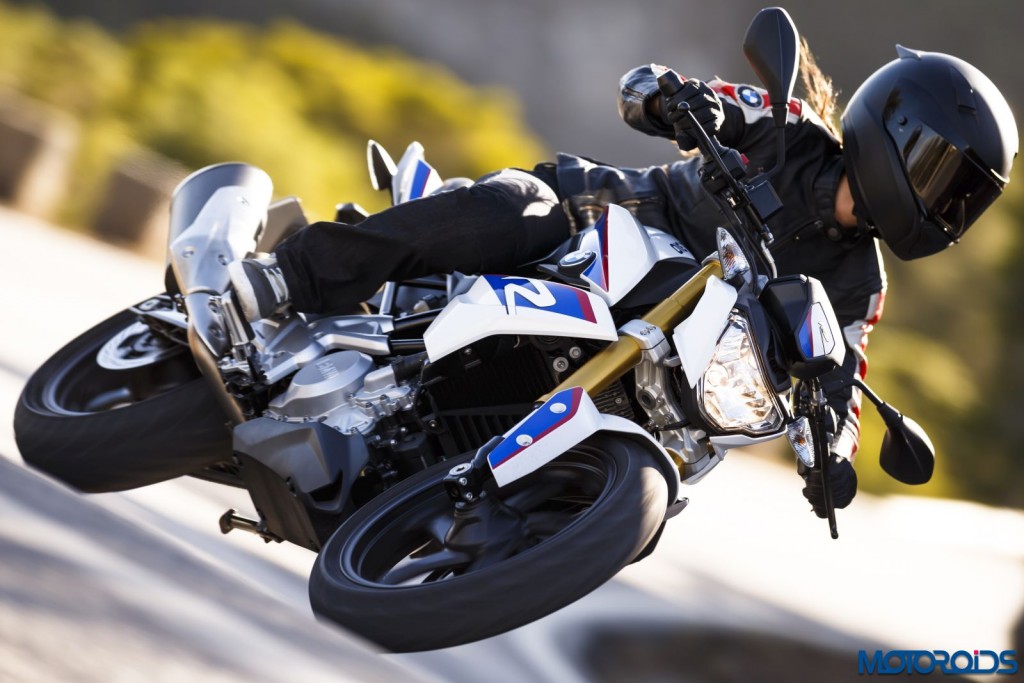 And now comes the German who made us do this comparison in the first place. To start with, this is the first sub-500cc roadster from the two-wheeler arm of the Bavarian manufacturer. The motorcycle will be developed by BMW Motorrad but will be completely manufactured by the German two-wheeler maker’s new Indian partner, TVS. The 313cc water-cooled, single-cylinder engine delivers a decent 34 PS (though rather lacklustre in comparison) of power and 28 Nm of torque. While we still haven’t had a chance to have a ride on this new BMW, going by the standards that the company has set with its previous and current products, we have high expectations from the G 310 R.

The motorcycle comes equipped with some premium quality features such as upside down forks, a large 300mm disc brake at the front and a 240mm unit at the rear and BMW Motorrad ABS as standard. Pricing will be a crucial factor for the new G 310 R but localisation of parts and production will help the BMW-TVS duo to price the motorcycle very competitively. So while there is no hint about the pricing, we expect to see a Rs 2.4 lakh ex-showroom tag on this roadster. 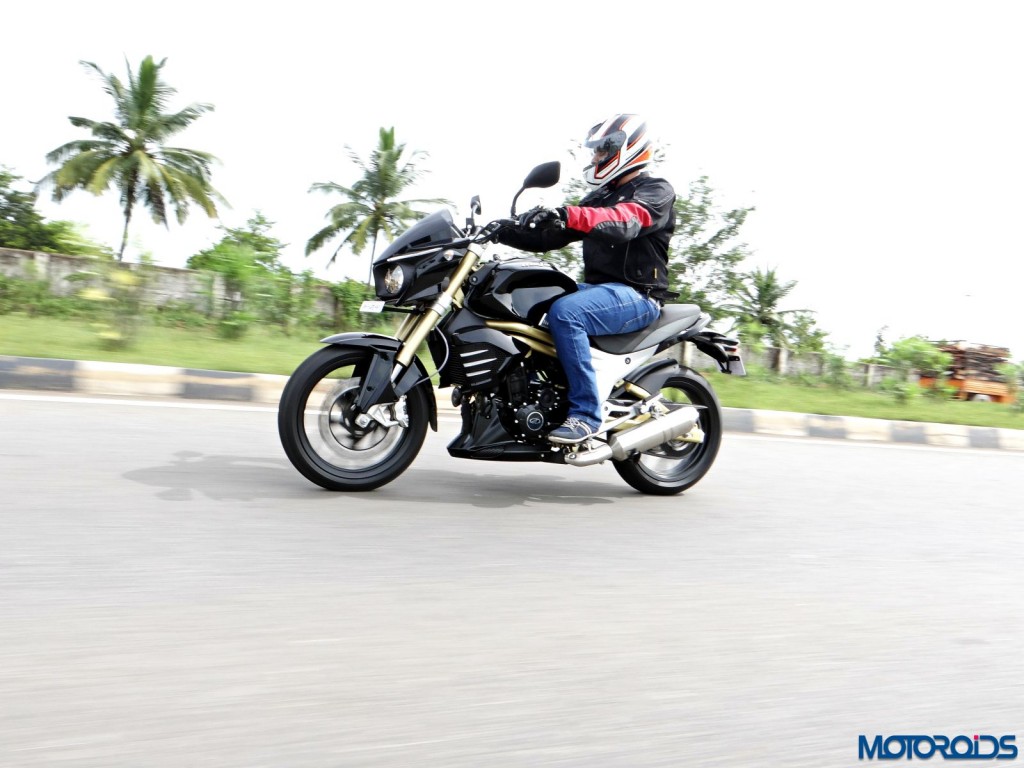 Grabbing the sixth spot is the recently launched Mahidra Mojo. The Mojo was first unveiled at the 2010 Auto Expo in Delhi. The motorcycle underwent rigorous R&D for multiple years, only to be launched in 2015, nearly half a decade after its debut at the Auto Expo in Delhi. But the painstaking R&D resulted in a well developed product that we got to ride from Bangalore to Coorg and back for an exhaustive review. The 295cc Liquid cooled single-cylinder motor that puts out 27.2 PS of power and 30 Nm of torque felt thoroughly refined throughout the rev range and there are very few, forgivable vibrations, that too north of 7,000 rpm.

The motorcycle is touted as a tourer and thus comes equipped with a massive 21-litre fuel tank which is claimed to give it a range of at least 650 kms. The motorcycle is slightly on the heavier side with a wet weight of 182 kgs and also gets the longest wheelbase in the segment but that does not hamper the handling by huge margin. The beefy mid-range on the rev-band makes it a joy around the corners while the slightly heavy weight gives it stability at high-speeds. The lack of windscreen on a motorcycle that is being touted as a tourer is a slight disappointment but cruising on highway speed limits is not a major concern in terms of ergonomics. Finally, at an affordable ex-showroom price tag of Rs 1.58 lakh ex-showroom Delhi, the lowest in the comparison, the Mahindra Mojo does make a good case for itself. 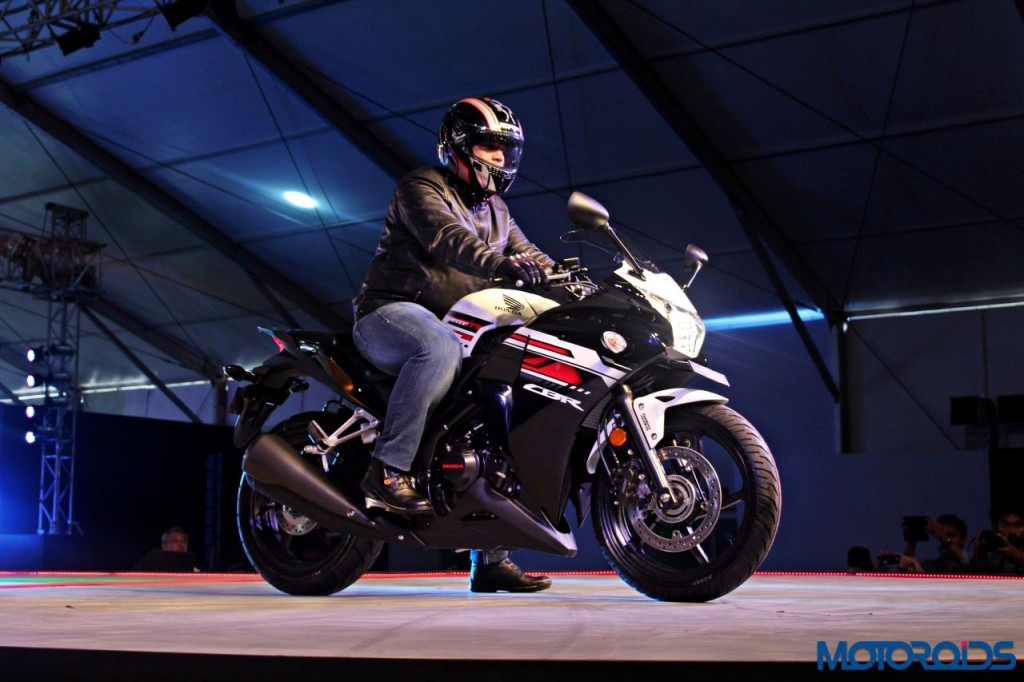 Last, but by no means the least, is a motorcycle that threw open the quarter-litre segment to the masses with its relatively competitive price tag at the time of launch, when compared to its arch rivals. The Honda CBR250R entered the Indian two-wheeler market at a time when the quarter-litre motorcycle market was led on the specifications front by the Kawasaki Ninja 250R. The highly competitive price tag than the Ninja 250R, comfortable and touring friendly ergonomics, well built body work, a refined 250cc engine and the optional ABS made it one of the most desirable and value for money motorcycle at the time of its launch.

However, with new motorcycles entering the segment, Honda’s specs feel outdated, especially for the price it retails at. But for people who prefer smoothness and reliability, the CBR250R is still a good buying option. The 249.6cc liquid cooled single-cylinder motor is refined with minimum vibrations cause any discomfort and develops 27 PS of power and 22.9 Nm of torque. Combine that with an optional ABS and a aggressive ex-showroom price tag of Rs 1.88 lakh (for the ABS variant) makes the CBR250R a worth competitor.

The new BMW-TVS G 310 R has an uphill task to compete against the existing products in the respective segment of the Indian two-wheeler market, especially against the massively successful and widely accepted KTM 390 Duke. On the positive side, the BMW developed and TVS manufactured G 310 R gets some really impressive features such as upside forks upfront, ABS as standard and BMW’s years of experience in creating quality products. The negatives are few but this new BMW does not present anything out of the box that we still haven’t seen in the Indian market.