After having bagged an order for 500 new low-floor Urban city buses from the Ivory Coast, Tata Motors recently handed over the first lot of 117 buses to SOTRA in Côte d’Ivoire’s economic capital, Abidjan. The buses are being financed under the EXIM Bank of India for operation by SOTRA – Abidjan Transport Company.

Built on Tata Motors’ CV (Heavy Commercial Vehicle) bus platform, the Tata LPO 1924 RESLF Abidjan’s next-generation bus has been developed with inputs from SOTRA, with a high degree of customization based on feedback gathered through city trails, over the last couple of months. 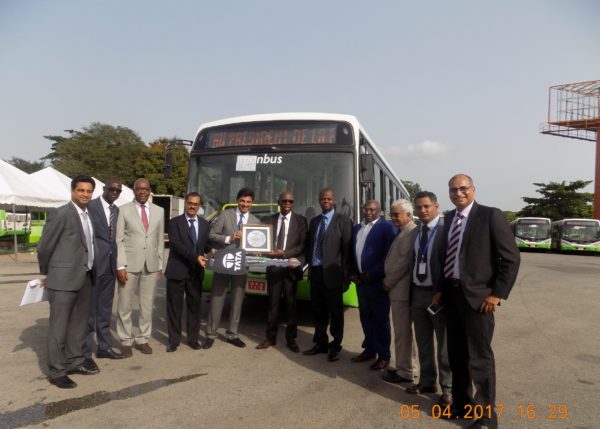 In his message, Rudrarup Maitra, Head International Business – Commercial Vehicles, Tata Motors said, “Tata Motors is extremely proud to have received this order from SOTRA and has worked very closely with them to give Abidjan, a truly world-class solution, through a tried and tested partnership meant to bring about change in the transport system in Cote D’Ivoire. With a dedicated team of Tata Motors engineers, having worked with SOTRA on-ground over the last 12 months, we have probably achieved one of the highest levels of customization in public transportation in the region, to deliver more passenger comfort, safety and efficiency to Abidjan’s bus service.”

Rudrarup Maitra further added,“What we have achieved with a partner like SOTRA today is a perfect example of a public-private partnership and hope to further partner other state transport units in the region, to better their respective bus services.”