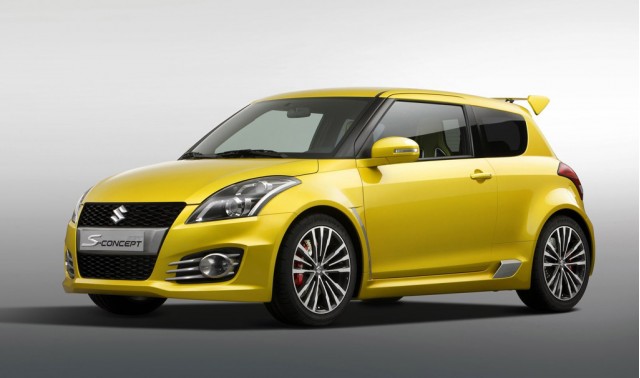 Swift is undoubtedly the best selling hatchback ever since its launch in the Indian Market. With no car coming close to its credibility, it has enjoyed a superior status in the industry. First, it was the smooth petrol version then the diesel came armored with 1.3 DDiS that took the market by storm and actually changed the mindset of the crowd that was preset for a typical diesel noisy engine.

Some days back we reported you about the Swift S Concept with a Teaser, Suzuki has unveiled the S Concept at Geneva Auto Show and it is awesome. The yellow hatch sweeps you off your feet in the very the first look as we are so used to see the Swift in its rather inoffensive form, but the S Concept shows you the other, nastier side of the car. Suzuki gave the S-Concept some aerodynamic upgrades, including new front and rear bumpers, remodeled headlights and rear lights with high-tech accents, a huge rear spoiler at the rear, and a set of 18″ wheels to complete the exterior set-up not to forget the twin silencers. Over at the interior, the modifications continue with a set of two-tone bucket seats, redesigned meter clusters, a sporty steering wheel, and carbon fiber trims on the car’s center console, giving the Swift S-Concept a touch of luxury to go with the sporty package.

The Swift S-Concept is power-driven by Suzuki’s 1.6-liter M16A engine mated to a six-speed manual transmission. The Japanese automaker did not release the official power output of the engine, that leaves us with no choice but to make an educated guess that says that the power of the S Concept will be somewhere more or less than the R Concept that was showcased last year churning about 150bhp.

Well this one is just a Concept Car for now; we have no idea about Suzuki putting it down for production. Until it does, you can do some modifications and performance upgrades to your Swift to make it somewhere like the S Concept. Do tell us what all modifications have you done on your set of wheels.