We reported in detail when the new Suzuki Let’s automatic scooter was unveiled prior to Delhi Auto Expo 2014 earlier this year. Now, it has emerged that Suzuki Motorcycle India Ltd (SMIL) recently initiated Suzuki Lets bookings process at all its dealerships across the country. Suzuki Lets bookings are being registered for a sum of INR 1000.

The new Suzuki Let’s is powered by a 112.8 cc single cylinder four stroke engine that has a max power output of 8.7 hp @ 7,500 rpm and peak torque output of 9.0 Nm @ 5,500 rpm. Suzuki Motorcycle India has claimed a fuel efficiency figure of 63 kmpl for its new automatic scooter. (An Image of Suzuki Let’s Specification Sheet has been attached below) The new Suzuki Let’s will come with Suzuki’s homegrown fuel efficiency enhancing technology, which is known as the ‘Suzuki Eco Performance’. As per the manufacturer, Suzuki Eco Performance enhances fuel economy, without compromising power.

The new Suzuki Let’s will go on sale in five colour options – red, blue, white, black and silver. As we said above, the new Suzuki scooter can be booked for a down payment of INR 1,000 at your local Suzuki dealer. It is being expected that the Suzuki Let’s launch will take place in early May, around the same time when this scooter starts arriving to SMIL dealerships. Going by the fierce competition in the automatic scooter segment, Suzuki Motor India Ltd is expected to price the upcoming model rather competitively around the INR 43,000 mark. 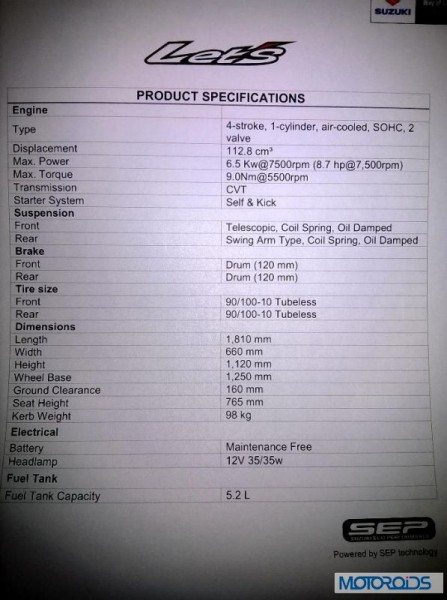