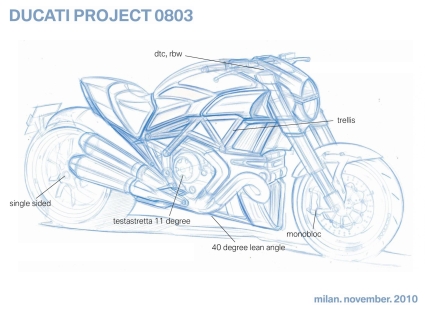 What has leaked onto the interwebs now is an official design sketch of the new muscle bike from Ducati coming to be known currently as the ‘Mega Monster’. As is clear in the picture the so called ‘Mega Monster’ will boast of a 1198cc Testastretta 11° V-twin motor, ride-by-wire throttle and a traction control system. Furthermore, it will get the usual Ducati bits like the Trellis frame, monobloc brakes, single-sided swingarm etc. The bike is slated to be unveiled officially at the 2010 Esposizione Internazionale Ciclo e Motociclo e Accessori (EICMA) or Milan Motor Show as the non-Italian-speaking janata understands.

Here’s what we reported earlier, thanks to MCN:

Motorcycle News (MCN) had recently revealed a few spy shots of a 1200cc V-twin from the Ducati stable being tested on road. Not much time later, MCN has revealed clearer and closer spy pictures of the same vehicle. The new images are the best available and reveal much more details.

The bike was spotted leaving the factory premises for a final prototype testing last week. The bike is slated for a November launch at the Milan Motorcycle Show. The 1200cc V-twin engine churns out 150+ bhp of power making it perform like a superbike with a sport-cruiser outfit.

According to a few unrevealed sources, the bike will be an amazing handler and will not be as heavy as it looks in front of our naked eyes.

Go to next page to view the entire gallery>>>