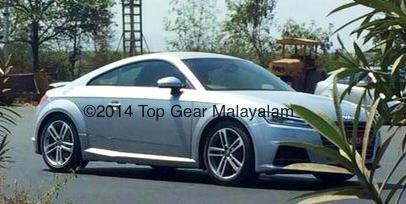 In a surprising development, the new 2015 Audi TT has been spotted testing in India. The new gen TT has been caught in India by a Top Gear Malayalam reader. It may be noted that it hasn’t been much time since the 2015 Audi TT was first showcased at the Geneva Motor Show 2014 and while it is almost for sure that the new gen car is headed to our car market, this test mule here could be a part of a global testing drive by the Volkswagn Group owned premium car maker.

The new 2015 gen car does sport a design that is distinctively  TT-ish but it still is every bit a new car and comes with an all new design and styling. The front end of the car is flanked by LED headlamps and an evolution of Audi’s bulgarian beard. The car also gets well pronounced wheel arches and the new car’s styling can be regarded as evolutionary. Inside the cabin, the new TT comes with all new panels, with the most prominent feature being the new digital cluster. Another interesting feature is the car’s climate control display, which finds itself in the centre of aircon vents!

The new TT is 90 kgs lighter than the outgoing model and the diesel variant, which is powered by a 184 PS 2.0 TDI engine, can dismiss 100kmph from standstill in just 7.2 seconds. This variant has a max power of 235 kmph. Also available internationally is a TFSI engines that has a cubic-capacity of 2.0-liters. This motor is available in two states of tune – 230 PS  – 370 NM  and 310 PS – 380 NM (available with TTS models).