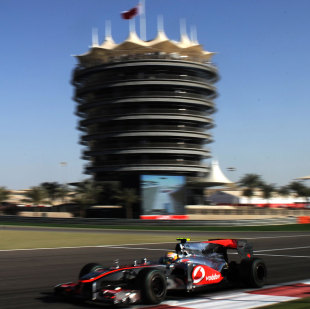 Formula 1 sponsors are pretty nervous as the season heads towards Bahrain GP next week. However, FIA is stating that the upcoming event should not be cancelled. Bernie Ecclestone recently said that the race is “200 per cent” on. However, some of the news dailies are reporting that some of the sponsors have pulled out owing to threat of violence next race weekend. “When you have an environment like Bahrain then all the sponsors will be watching developments very, very closely and talking to each other.It’s a case of ‘watch this space’ basically.”, a source said.

Tim Bampton of Just Marketing said, “(They) will effectively just have to follow the sport. They will have to watch and wait to see what happens even though they could be caught in the vortex.” It may be noted that FIA president Jean Todt is silent on this. Now, Jean’s son Nicolas shares ownership of his GP2 team with Bahrain’s controversial crown prince. “We all know why it (the Bahrain saga) might have dragged a bit,” Mark Webber recently said to the Telegraph.

“F1 is like that. There’s a lot of funding and finances that have come from Abu Dhabi and Bahrain and the Middle East. They’re very excited about F1 and they clearly want to give it another go. Let’s see if it works,” added Webber.