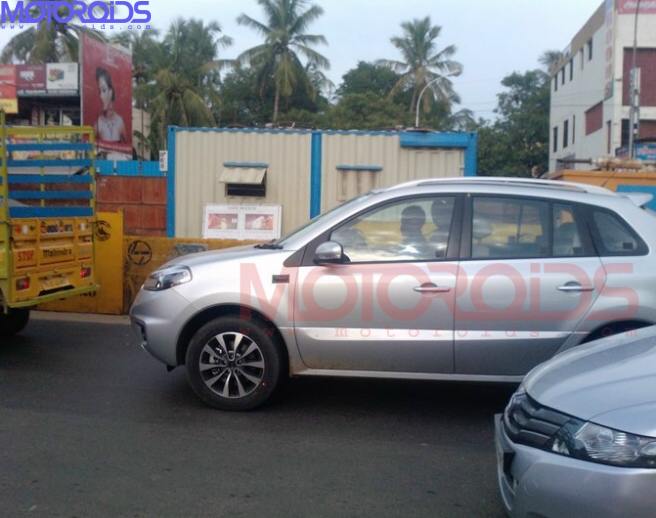 Renault is planning to launch its Koleos crossover in India, hopefully during the festive season. One of Motoroids’ avid readers, Anand Kumar has managed to click some spy pictures of the car capturing it in profile and from behind.

Our regular readers will remember that we had done a detailed feature on the 2012 Koleos when the French carmaker first unveiled the car internationally. Looking at the spy pictures, it seems that it’ll be this 2012, facelifted version only which would make it to our shores.

The Koleos, on its arrival in India will come equipped with a 2-litre, 150bhp all-aluminum common-rail diesel engine with variable valve timing. This is the same engine that powers sister company Nissan’s X-Trail SUV as well. A 175 bhp version of the engine is also available internationally.

In its 2012 version, the Koleos has refreshed front-end styling, and the interior too has been altered. The new Koleos features new slimmer headlights, and an elegant chrome grille flanking the Renault lozenge. Inside the cabin, a selection of new upholsteries and trims has enhanced the ambience. The dashboard and instrument lighting have evolved, too, with the introduction of a modern, more stylish speedometer housing and display.

Features on the Koleos include hands-free entry and ignition, automatic headlight and windscreen wiper activation and Hill Start Assist and Hill Descent Control for the 4×4 version. Dual-zone climate control and premium Bose sound audio system are some other features that need a mention.

Expect the Koleos to be priced in the region of Rs. 18 lakh on its launch.

You can view more pictures of the 2012 koleos and read more about its features in our earlier article on the SUV here.