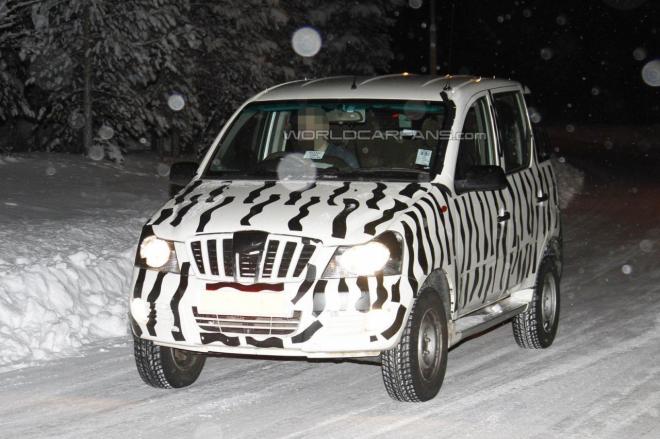 We recently reported about the possible launch of the Mahindra Xylo facelift on 8th February. We talked about how Mahindra intends to give the MUV a family look by giving it a XUV5-oh-oh inspired front fascia. We have also reported about the Xylo based series of pick up trucks, christened the Genio. Now, we are frankly tired of posting umpteenth number of times about the Xylo and its various avatars. But recently, the eagle eyed folks at World Car Fans spotted a Mini Xylo undergoing cold weather tests and have managed to come up with a pic of the same. We have been talking about the Mini Xylo a fair bit but what catches our attention is the vehicle was testing in Northern Europe when spotted.

The unveiling of this vehicle should happen in a couple of months. It is being said that a three-cylinder oil-burner producing 70 bhp and 160Nm of torque will be found under the hood of this vehicle. Also, as seen in the numerous photos that keep surfacing on the web world, the spare tire is mounted to the rear door.

We wonder what was the mini MPV doing in Northern Europe? To the best of our knowledge, no examples of the Mini Xylo have been spotted in mountain regions of India which have equally harsh weather (with harsher terrain thrown in for free). Are the folks at M&M planning to launch the vehicle in Europe? The question will remain to be unanswered as of now.

We can safely expect the vehicle to come with the changes that will be seen on the upcoming Xylo facelift.