Home KTM SPIED: KTM Duke series to get a makeover for 2016 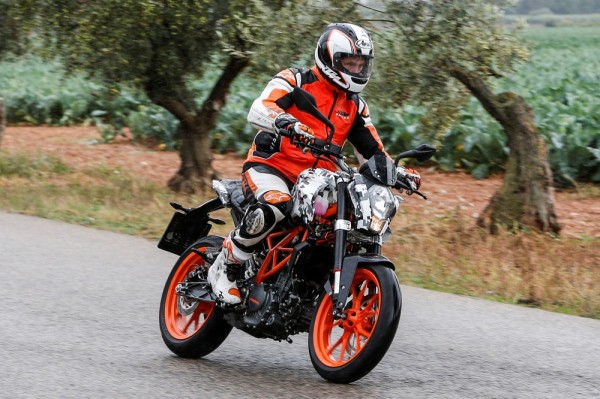 Many of motoring enthusiasts, especially the KTM fanatics, are awaiting the touring spec Duke series, which apparently was spotted testing. But the latest spy images that were reported by automotive website Motorcycle News suggest that the Mattighofen based two-wheeler major is planning a makeover for its Duke series of motorcycles. The current design for the Duke 125, 200 and 390 has been prevailing since 125’s launch in 2011 and we believe that KTM is now planning a facelift to keep up with the moving times.

So what’s new in the upcoming models? Firstly, you can spot a bolt on sub-frame as oppose to a single piece frame that is found on the current generation motorcycles. Moreover, except for the headlight assembly, the entire bodywork has gone under a scalpel with a redesigned tank cover, and a more revealing side panel. The rear gets a more compact tail unit borrowed from the RC-series. You can also see the under belly cover is missing in both the photographs which comes as bit of a surprise as the engine directly exposed to mud and muck. We believe that the final product will receive an under belly cover. 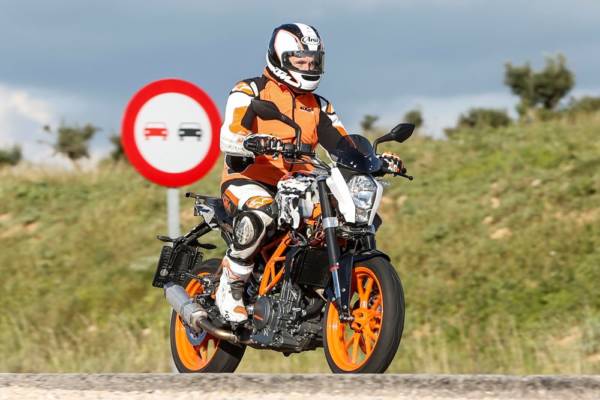 The motorcycle in the second photograph can be seen loaded with KTM Powerparts like a bigger windshield and an aftermarket free flow exhaust. The rear also seems to get a pannier mount for touring accessories.

Coming to the power mill, we expect that KTM will give a minor power bump of about one to two horsepower to these upcoming models. The current KTM Duke 125, 200 and 390 put out 15, 25 and 43 hp of power respectively. The current KTM Duke series comes with an optional ABS (390 Duke receives ABS as standard) and we expect to see similar setup on the upcoming models as well. Expect to see display models of these upcoming motorcycles at the 2015 EICMA show with official launch and deliveries to commence in 2016.

This is all we could make out from the photographs. Did you spot something that we missed out on? Share your thoughts, opinions and observations through comments below.