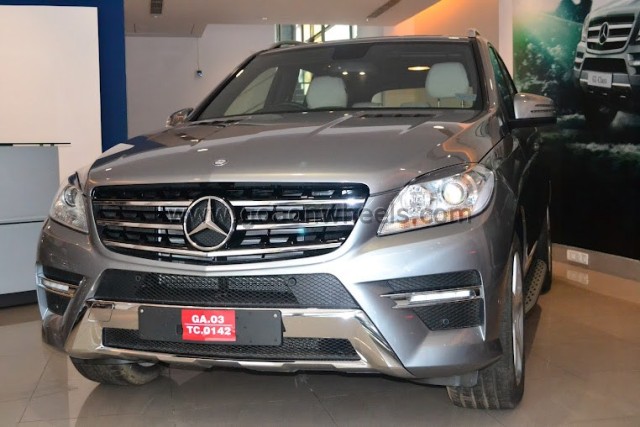 Mercedes India is all set to launch the 2012 M-Class in the Indian market on 15th July. Less than 48 hours before the launch, good folks at popular website goaonwheels managed to spot a new M class at the Mercedes Benz dealer in Goa.

The latest edition of the popular SUV is an all new product. However, the first word that comes to the mind when glanced at is – ‘Bland’. Though Mercedes seems to have solved the space issue which made the previous M-Class a hassle to sit in. There is a visible change in the size of the car and looks like the 2012 M-Class will come with an extended wheelbase taken from its elder sibling the GL-Class. The 2012 M-Class also features a huge panoramic sun-roof which will make the cabin come alive with fresh incident light. There is also the wrap around rear windscreen which makes the M-Class stand out of the crowd.

The insides are typical Mercedes top notch standard quality with a lot of wood used to give that upmarket feel. The ML 350 CDI will be laucnched first. The motor here pumps out some 258bhp and churns out 63.2kgm of pulling power. The motor is mated to a seven-speed 7G-Tronic gearbox along with permanent four-wheel drive as a standard feature.

The car could be priced in INR 68-73 lakhs bracket.