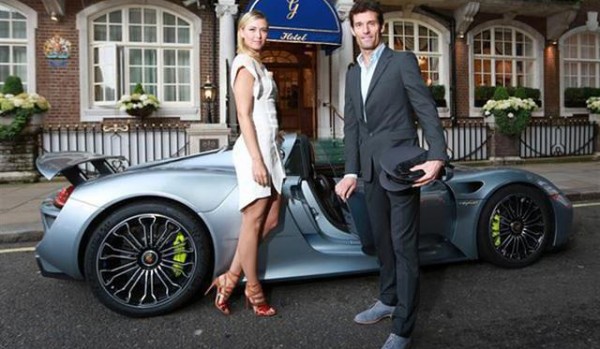 An amazing super-car which offers jaw-dropping performance, put an amazingly beautiful tennis player in it and some of us would need a lending hand to put our jaws back in place.It was a similar sight to see Maria Sharapova arrive at the Pre-Wimbledon party in a Porsche 918 Spyder, driven by Mark Webber.

Maria Sharapova is an ambassador for Porsche, whereas Mark Webber was their official driver in ht Le Mans 24 hour race. Both were pretty impressed by the performance the plug-in hybrid super-car offers. Interestingly the Porsche 918 does a 0-100 kmph dash in 2.5 seconds and manages a top-speed of approximately 350 kmph. Yet it is exempt from the ‘Congestion Charge’ one has to pay for parking in Central London for being a ‘Hybrid Car’. 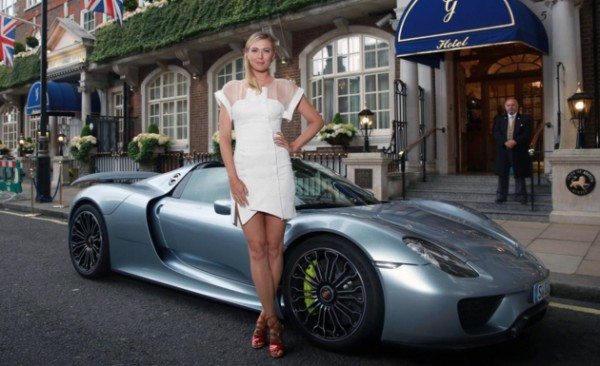 Sharapova was amazed to arrive at the Party in the Porsche 918 with a racing driver like Mark Webber, driving around in a city like London, running only on electric power.She called the Porsche an ‘Unbelievable’ car.

Mark Webber was just as impressed as he drove the Porsche 919 Hybrid race car at Le Mans last weekend and is called the road-going 918, the closest thing to the race car. The Pre-Wimbledon party was held at Kensington Roof Gardens in West London and the Porsche found as many admirers as Maria on that night.