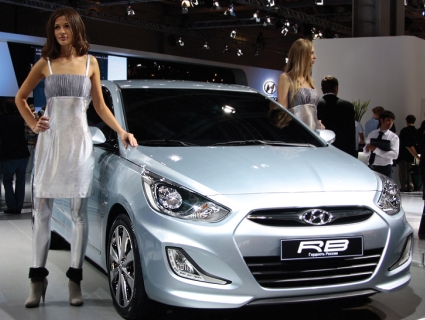 What you can see here is the Hyundai Concept RB – a sub-compact sedan concept car shown at the 2010 Moscow Motor Show that got underway last evening. This concept is essentially a repackaged European 2011 Hyundai Accent / Verna that was recently launched. This new concept is designed for Russia is what the Hyundai Press Release claims. However, the demographic of the Russian car market matches that of India and hence both these markets share a lot of common car – especially the entry level ones. Hence we are betting big that this car will make its way into India as well.

The Concept RB, though radical, employs subtler lines and design elements as compared to the new Accent / Verna launched in Europe. Furthermore, this car is based on the i20 platform which would make it easier for Hyundai to manufacture this car in India if they decide to. The 1.4-litre Gamma engine which the RB’s chassis is designed for, produces a healthy 107PS which should be a perfect output for Hyundai to compete with the likes of the Ford Fiesta, FIAT Linea, Honda City and the recently launched Volkswagen Vento. Should they decide to play even higher, the RB’s top-end variants could use the 1.6-litre / 124PS Gamma engine as well which should do wonders for this segment.

If launched, the RB will be christened the 2012 Verna in India and will replace the Verna Transform which is nothing but a stop gap arrangement until the new model comes out. The RB is going to be manufactured in Russia by January 2011 and will go on sale by March 2011. We expect the initial test mules to be made in Russia and then run on Indian roads by February 2011 to start the development process for India. The localised version should start testing by April 2011 with the final model coming out by Q3/Diwali 2011. Manufacturing the RB will be a cheaper option for Hyundai than launching the European Verna. Expect the car to sell in the Rs. 6.5 to 9.5-lakh range.