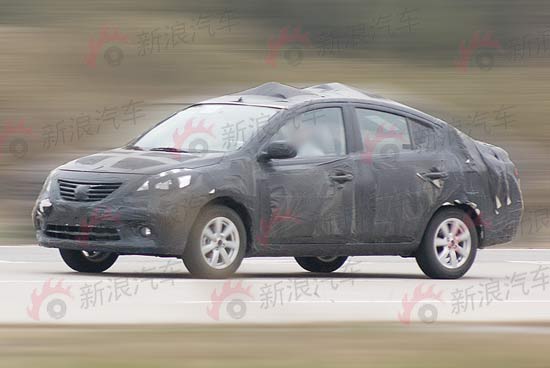 Remember when there were reports about the Nissan Micra’s India coming mission? We along with thousands of our journalist friends emphasised on the word ‘V-platform’, the platform on which current Micra is based. And you all must be knowing that a technology like this, I mean ‘platform technology’ makes sense in a developing market like ours.

So expecting a responsible and wise manufacturer like Nissan to introduce another model on the same platform won’t be too much of a surprise, right? Well, Nissan is generous enough to oblige then. Reports suggest that the car in question, that is the Micra sedan should be launched sometime next year. What you can see here are scoop pics of the same car being tested somewhere in China.

The sedan, as evident from the pics is a little longer than the hatch. So expect better legroom and creature comforts, if Nissan updates the feature list that is, like VW did with the Vento. Engine options may include an tuned up version of the 1.2-litre HR12DE Petrol unit doing duty in the Micra. It could help Nissan price the low end model of the sedan very competitively, thanks to the tax benefits. Another possibility is the more potent 4-cylinder 1.5-litre mill (HR15DE) which is a more viable option for a car of this size and proportions. A 1.5L Diesel, the one that the Logan uses, may also make it to India to join the increasing demand for diesels. The wheels, which could be a size bigger than the ones found on the hatch, will be powered with the help of a 5-speed manual ‘box. A 4-cog auto ‘box might be available as an option.

As both the cars are based on the same platform, a lot of features and components are going to be shared between the two. In India, the car could continue using the ‘Tiida’ nametag – a popular car that this test mule will replace in the months to come. Expect this  sedan’s design to reflect cues of the Nissan Teana. More updates to follow. Keep your eyes open and stay tuned to Motoroids!