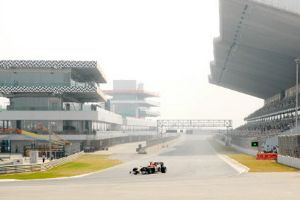 Sales of tickets for the 2012 Indian F1 Airtel Grand Prix to be held at Buddh International Circuit on October 28 began today. The prices of the rickets have been reduced by JPSI and the grand stand passes will now go for Rs 30,000, i.e., Rs 5000 less than last year. The passes will be valid for all three race days. While these charges are inclusive of food & beverage, they don’t include the parking charges. JPSI is also providing tickets to a limied no. of seats for Rs 20,000 on the main race day. Booking tickets early will avail the buyer some BIC merchandise for free. The natural stand ticket goes for Rs 3,500. Sameer Gaur, MD & CEO, JPSI, launched the sale of tickets and the first ticket were given to IPL team Deccan Chargers, who was present at the launch ceremony. He said, “facilities at BIC had been improved further and you can look forward to a far more entertaining F1 race this year. We are also trying to bring some other thrilling international races to BIC, details of which will be announced soon”.

Tickets can be booked at bookmyshow.com. Following is the link for the same: