Rolls-Royce Motor Cars recently announced the changes made to its Asia Pacific team. The changes include a new Regional Director, General Manager and Marketing and Events Manager for the Asia Pacific Region.

The firm confirmed that the post of Regional Director for Asia Pacific will be taken over by Paul Harris. The former Regional Director Colin Kelly is reportedly moving back to Canada after eight long years to reestablish his own business. Paul has bagged 25 years of experience from the BMW Group which makes him hold significant roles in the UK and continental Europe. Paul had very recently been a General Manager in Northern Europe which included Sweden, Denmark, Norway, Finland and the Baltic States. Paul stated after his appointment, “It is a real privilege to be working with the pinnacle brand in the Asia Pacific where we have a healthy order bank and outlook for both the Phantom family and the new Ghost models. I arrive at an important time for the region as we review and develop our business in what is predicted to become one of the fastest growing regions for Rolls-Royce Motor Cars in the world. Even more importantly, our challenge will be to exceed the high expectations of our Asia Pacific customers.” Paul will play his role as the Regional Director for Asia Pacific from the company’s office in Singapore. He will be supported by teams in Beijing and Tokyo. 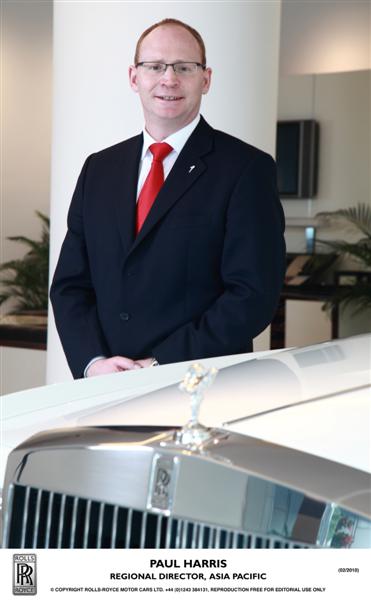 The firm confirmed that the former Marketing and Events Manager for the Asia Pacific region, Brenda Pek has been promoted to the designation of General Manager for the South and East Asia Pacific region. She will be the one responsible for the company’s business in key markets such as Australia, India, Japan and South East Asia. Brenda had joined Rolls-Royce Motor Cars early in 2007.

Dan Balmer was the previous Product Manager for the new Ghost model. Dan has been in the automotive industry for over 17 years. With this extensive experience, he brings along with him a considerable amount of product knowledge of both Phantom and Ghost models. Dan will play the role of the new marketing and events manager across the Asia Pacific region.