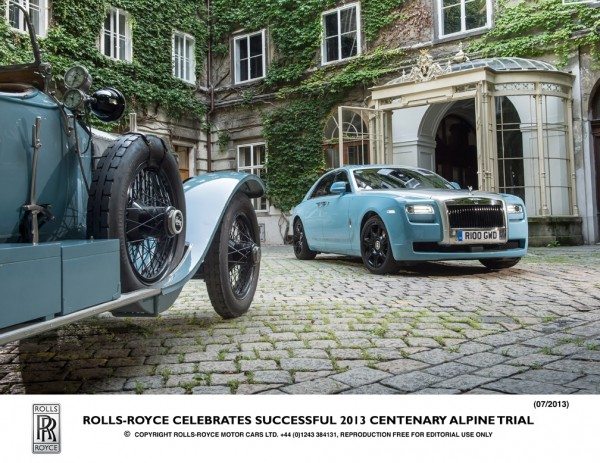 After 16 days and more than 1,800 miles, the 2013 Centenary Alpine Trial has now drawn to a close. The sight of 47 magnificent Silver Ghosts wafting their way through the Alps, accompanied by the Rolls-Royce Motor Cars ‘Works Team’, will live in the memories of those that saw the marvel at first hand for many years to come.

History was brought to life by the intrepid owners as they piloted their machines with consummate skill up challenging Alpine passes and across the borders of five countries, before emerging in Vienna just as the original competitors did exactly 100 years before. The 2013 Centenary Alpine Trial was also graced with British Royalty, Lords and Ladies, Ambassadors and participants from 12 countries as far flung as Australia and the United States.

“The Centenary Alpine Trial has clearly embraced the Spirit of Adventure that is synonymous with Rolls-Royce, and I applaud the participants for their resolve and determination,” said Torsten Müller-Ötvös, CEO. “The 1913 Alpenfahrt led commentators to declare that Rolls-Royce built the ‘Best Car in the World’. The 2013 Centenary Alpine Trial reinforced that message, and demonstrated that the Company continues to do so to this day.”

Rolls-Royce Motor Cars was presented with the Archduke Leopold Salvator trophy by the 20‑Ghost Club, in recognition of the spirit the Company had shown in supporting and actively participating in the Trial. The trophy, a precious claret jug, was one of the original awards presented to Rolls-Royce at the 1913 Alpenfahrt.

The gathering of several Rolls-Royces in any one location is guaranteed to draw onlookers, but the congregation of 47 magnificent machines in glorious morning sunshine outside the Panhans Grand Hotel stopped all local traffic with the gathering crowds. The palpable sense of achievement, celebration and of history being made sang through the crisp Alpine air.

The preparation for the final run followed the exacting re-enactment that had thread through the entire event, with the drive from Semmering back into Vienna mirroring the same journey exactly 100 years previously, on Saturday 29 June 1913. And so, with a sense of mixed emotions at the closing stages of this great event, the cars made their way in convoy to the historic capital city.

Wafting their way round the final glorious sweeping curves, as the cars reached the outer city carriageway they accelerated to a comfortable 100km/h or more, easily matching the speed of much more modern machines. Everyone present marvelled at the engineering prowess of the beautiful motor cars, many built more than a century before.

Onlookers clapped and cheered as the convoy approached central Vienna, and made their way to the final destination and scene of the start just 16 days previously, the Kursalon. A warm welcome from the The Markgraf Pallavicini and a glass of crisp Champagne followed, with the cars swamped by onlookers and members of the local media.

The spectacular finale took place at the Palais Pallavicini, with the sounds of chinking Champagne glasses mixing seamlessly with celebratory tales from the road and exquisite live opera pervading every corner of the historic building. The Radley car and the 2013 Alpine Trial Centenary Ghost sat side-by-side in the courtyard as stable mates, resplendent in their Works Team colours.

Amongst the awards given on the evening, The Rolls-Royce Motor Cars ‘Spirit of Adventure’ summed up the atmosphere and ethos of the entire event. Bob Kilburn’s 1921 Silver Ghost Tourer, with bodywork by Barker, had suffered a fuel tank rupture in the early stages of the Trial due to an accident caused by another driver. Undaunted, and with a stubborn persistence to refuse to accept that the car had ‘failed to proceed’, Bob rigged a temporary fuel system using jerricans and a fuel pump bolted to the running board, giving a maximum range of just 30km per top-up.

Bob was presented with the award, to a standing ovation by all those present, by Richard Carter, Global Communications Director, Rolls-Royce Motor Cars. Bob humbly dedicated the award to all those that had taken part in the Trial, and characteristically shrugged off the acclaim with a cheery smile.

The 1913 Alpenfahrt led commentators to declare that Rolls-Royce built the ‘Best Car in the World’. The 2013 Centenary Alpine Trial reinforced that message, and demonstrated that the Company continues to do so to this day.