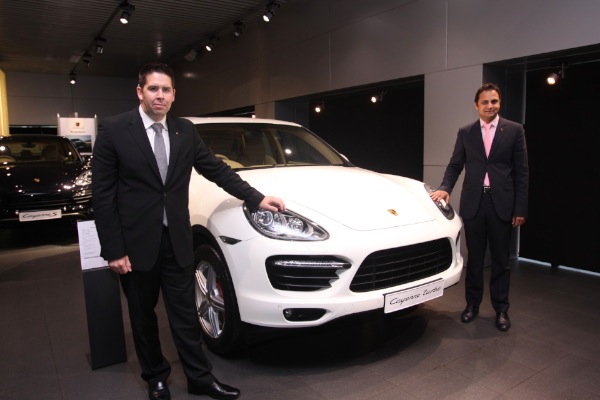 The eagerly awaited Porche Cayenne is finally here! Just few moments back, the new 2011 Cayenne lineup was launched at Porsche Centre in Mumbai by Precision Cars India, the official importer for India.
The entry level Cayenne will be housed with a 3.6 litre V6 engine which is capable of churning out 300 horsepower and is mated to an eight- speed Tiptronic S automatic transmission. The biggest improvement is seen in the fuel efficiency area as the car now burns about 9.9 litre of fuel per 100 kms – an improvement of 20% when compared to the previous version.
The Cayenne S is powered by a 4.8 litre V8 configuration which receives a power boost of 15 hp, developing a total of 400 hp. Fuel consumption in this case improved by 23% – 10.5 litres/100 kms.
The Cayenne Turbo remains the top -of- the- model range which oozes out 500 hp owing to the 4.8 litre twin turbo V8 engine.
The Cayenne Diesel with its 240 bhp 3- litre V6 powerplant reduces fuel consumption by 20%, down from 9.3 to 7.4 litre to 100 kms while churning out 550 Nm of torque.

And now for the green part, the Cayenne S Hybrid uses a combination of a 3.0-liter supercharged V6 engine that produces 333 horsepower and a 47 hp electric unit, thus developing a total 580 Nm of torque at 1,000 rpm. The ‘sailing mode’ allows the driver to switch off the combustion engine at speeds of up to 156 km/h. This engine combination makes the Cayenne S Hybrid the cleanest vehicle in Porsche’s lineup, releasing only 193 grams of CO2 per kilometer.